This could be a challenge

As I mentioned in my last post, I am working from home this week with the munchkin

I started working at 6:30 AM with the hopes that he would sleep a while longer so I could get some stuff done.  Andrew decided not to play along and was up at 7:00.  Damn.

I went and got the munchkin, brought him upstairs with me, and laid him across my lap so he could nurse while I worked.  I had hoped that he would pass back out after eating since he slept less than 10 hours last night. Nope.  Damn.

He wanted to play.

He lasted about 20 minutes on the playmat and then wanted to be held.  He amused himself on my lap by gnawing on my arm like a piece of corn on the cob. 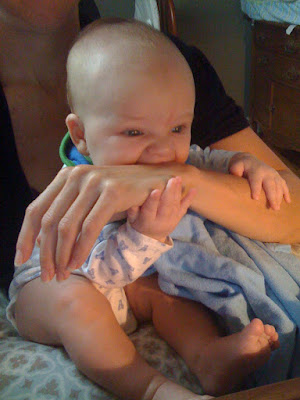 Makes typing a bit more of a challenge, but it kept him happy and quiet.

After chewing on me for a while he decided to regurgitate half his breakfast on both of us.  Awesome.

Back downstairs for a wardrobe change and while I was down there I grabbed his bumbo seat.  I figured maybe he would like to sit on my desk and watch me.  This was only fun for  him for about 5 minutes. 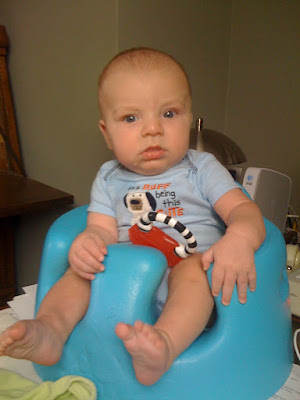 He played with his rattle and chewed on his teether til he was hungry again.  Fortunately I was able to get him to eat and pass out for a nap.  Currently he is draped across me napping on his boppy.  My back kind of hurts from the way I'm sitting and typing is slightly awkward as I try not to bump his head. But he is asleep and I've been able to get two test plans done, so I consider it a win-win.

Keeping my fingers crossed that the rest of the week is a success, too.
Posted by kjw at 6:48 AM