It goes without saying that the munchkin is constantly finding new things to get in to and more ways to entertain himself.  I'm constantly amazed as his ability to hone in on the one thing in the room that we would rather him stay away from (laptops, fireplace tools, eyeglasses, etc).  This kid definitely has a sixth sense about those things.

Anyway, he has now discovered something that isn't dangerous, but it can be a little annoying.

He loves the crinkly sound of the little travel wipes and I will give him those to keep him entertained when we're out and he's getting ornery. He likes crinkly stuff - always has.

But now he has discovered the joy of pulling out the wipes.  He has also now figured out the wipes container that stays on the counter in the kitchen and when I put him in his seat he is lunging for that bad boy before I can even get him strapped in. 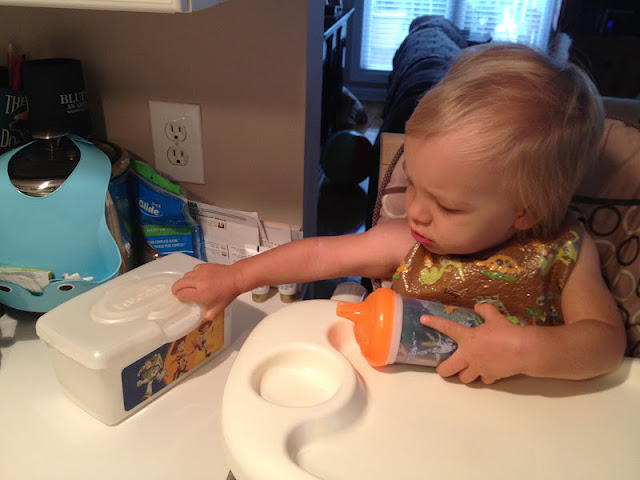 He likes to press buttons and I watched him with his one pudgy finger poking at the release button on the lid.  I walked over to the sink to rinse something off and the next thing I knew he was sitting there happily pulling wipes out and piling them on his tray.  I don't have a picture of that, but the expression on his face was a little something like this: 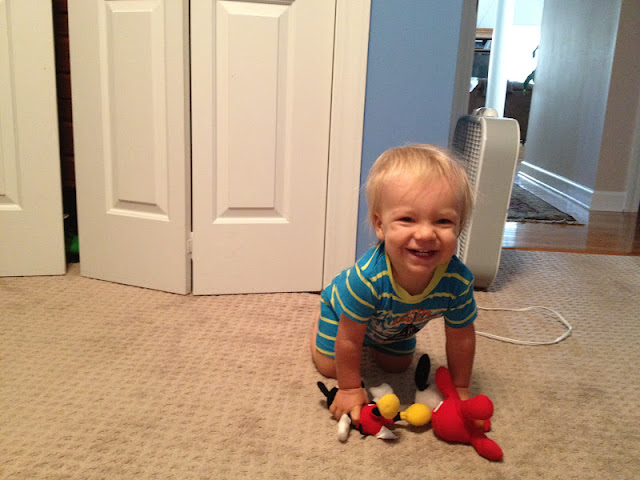 I guess on the bright side it wasn't like they went to waste. He is such a mess by the time he gets done eating that I have to use all of the wipes he so "helpfully" gets out for me.

And it could be worse. He could be reaching into his diaper and pulling out poo or getting into the trash can and playing with something equally nasty.  I guess I should be thankful that his current fascination is with something to help clean.

Just makes me wonder what he'll discover next???