I still can't believe my first little baby is four years old. It doesn't seem possible, but he is.

With turning four came another well check at the pediatrician.  I had it scheduled for 3:30 on Monday do it would be late in the afternoon and we could head home afterward.  I picked him up at school during snack time, gathered up all of the artwork he's been drawing, and we headed over. The whole way there he kept saying "I don't want any shots!".  I kept saying, "We'll see what they say." since I knew he would be getting a whole mess of vaccines.

We got checked in and waited in the well visit waiting room while we waited to be called back. He watched some Toy Story: 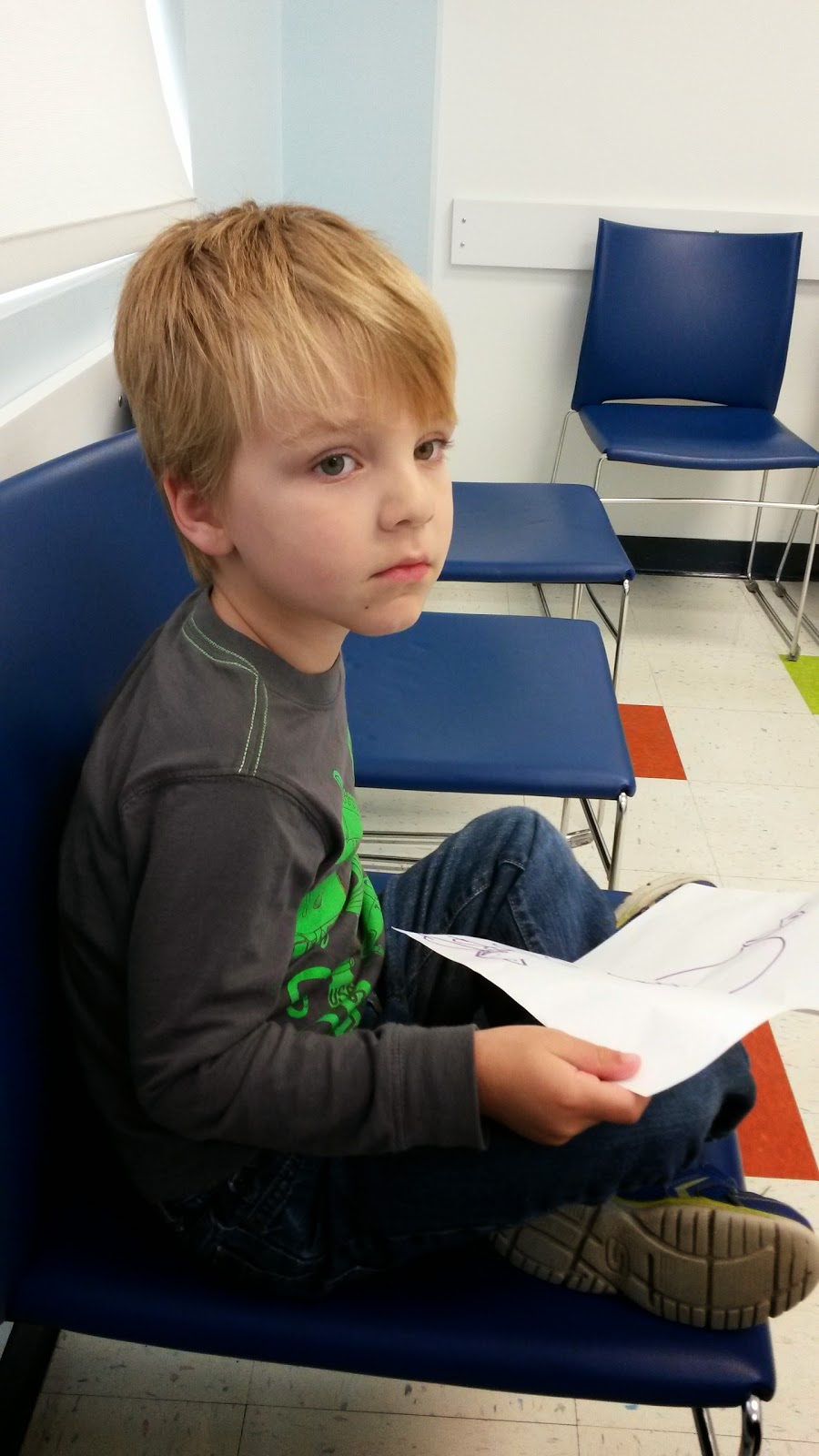 and showed off his favorite picture: 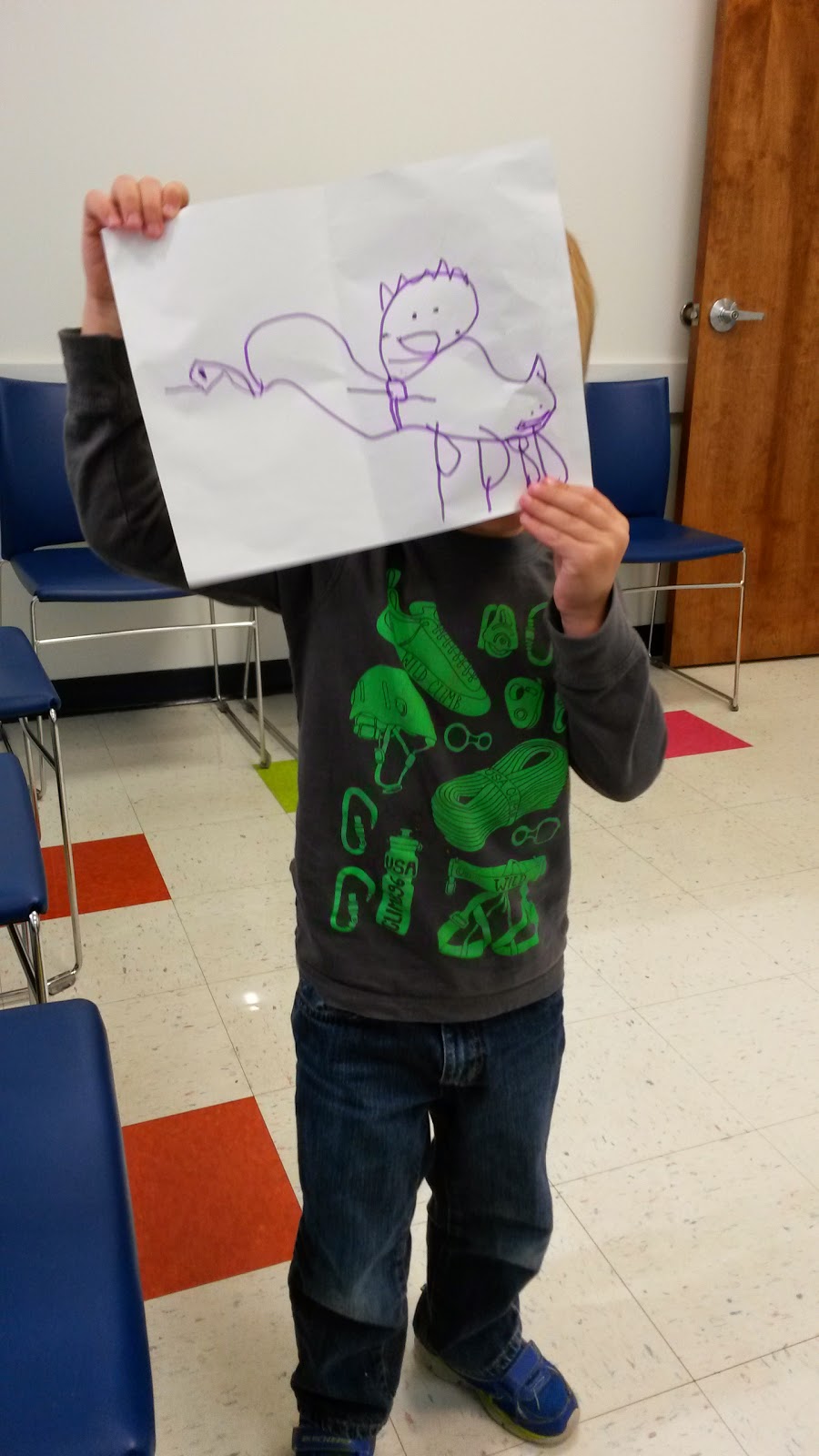 He's very proud of his boy riding a monster  :)

After five or ten minutes we got called back. As soon as he saw the nurse he said "I don't want any shots!".  Oh boy.

On the way to the exam room we stopped at the scale so he could get weighed and measured. His stats were:

Holy smokes!  That means he grew four inches over the past year (he was 38.25" and 36 lbs 4 oz at three years).  No wonder all of his pants that were too long last spring were way too short for him in the fall.  My little stringbean.

Anyway, we got into the exam room and the nurse went to work taking his temperature, O2 sats and then his blood pressure: 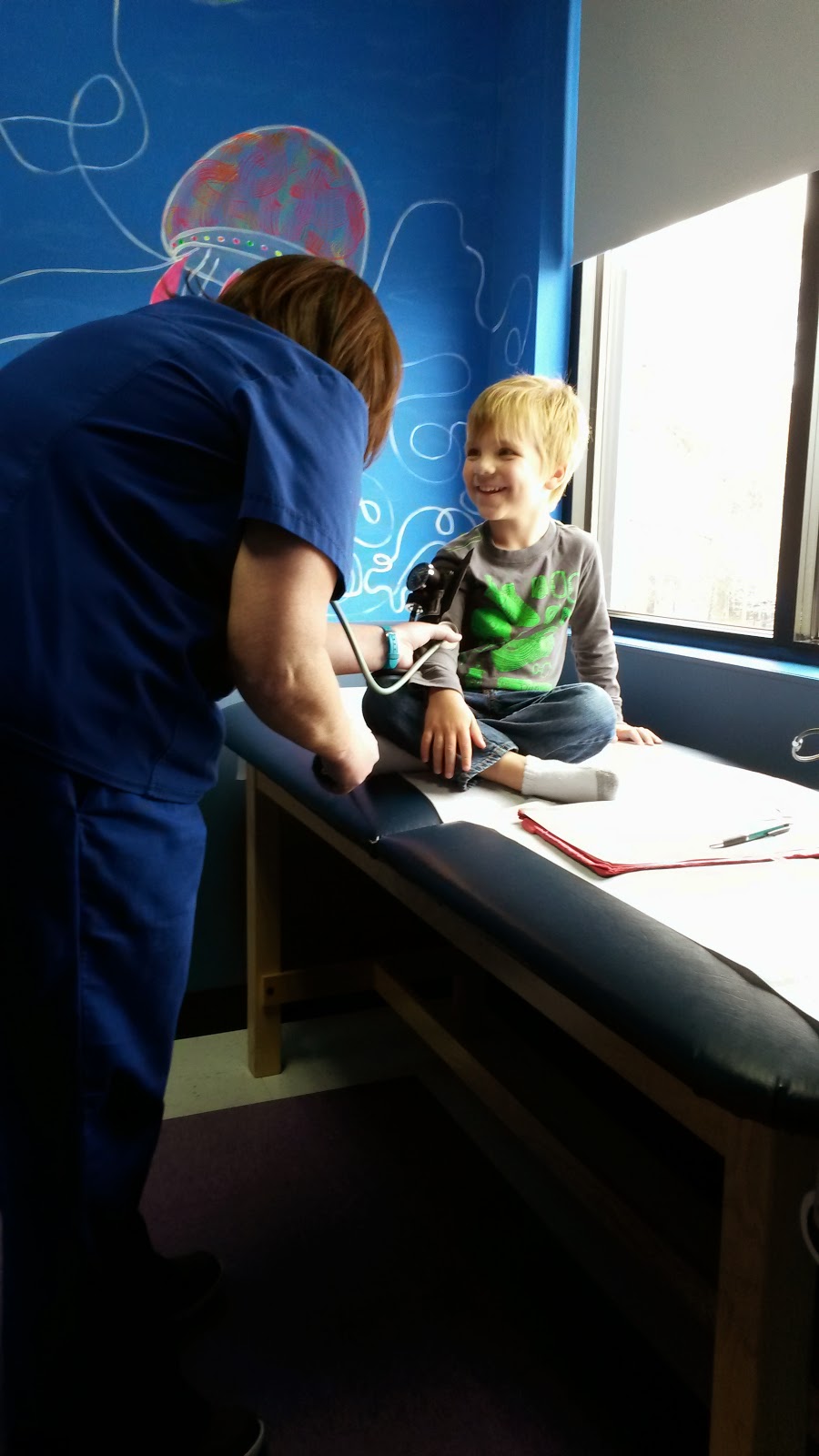 He was very cooperative and I was so proud of my little dude.  When she was done she left and we waited for Dr. Graham. In the couple minutes where it was just us he watched people out in the parking lot and kept asking if they were coming to the doctor to get shots.  The kid was not gonna let the shot thing go.  After maybe ten  minutes Dr. Graham came in and started the exam. He asked Andrew questions about school and his friends and what he likes to do. I was impressed with how well he did answering questions and interacting. He can be really shy sometimes so it's nice to see him be more outgoing.  Dr. Graham said he is doing great, he's very engaging and we have nothing at all to worry about developmentally. He was impressed that Andrew never gets out of his bed at night and remains dry all night (which he's been doing for quite some time now).  We chatted a bit more and then he was off and we had to wait for the nurse. Andrew asked if we could go and I had to tell him we weren't done yet. Then the nurse came back in with the shots and he instantly said "I don't want any shots!".  I apologized to him and told him he needed to get a few shots, but it would be quick and he would get a surprise when we got home.  I held his hands while she went to work.  With the first one he just seemed shocked, but then he quickly started to cry and say "Owie! Owie! Owie!".  I tried to keep him as calm as possible and to relax him since I know he tensed up, which makes it worse.  When she was done I got him up and hugged him and tried to calm him down. He was pretty upset, and the nurse kept offering him a Popsicle, but all he wanted was a lollipop.  We headed out front to check out and he picked out a sticker and a sucker.  As we walked out to the car he told me again, "I don't want any more shots!".  The good news is it'll be another 7 years before he needs any more. Hopefully by then he's forgotten about these ones...