Football Fridays and why I have to keep working

Fridays in the fall are football Fridays at our wonderful daycare. They encourage us parents to dress our youngin's up to support our favorite college or NFL teams.

J and I are both very big football fans, but we support different teams.  For some reason he is a Dallas Cowboys fan even though he is from NC. I think it has to do with watching the cheerleaders on TV as a young kid.  I, on the other hand, am a die hard Steelers fan, having grown up in southwestern PA.

People find it amusing that a Cowboys fan and a Steelers fan got together. And now it's a battle to see which team we can get the munchkin to pull for.  Obviously at the moment he doesn't know any better and has no say in it so he wears what we put him in.  Since I am the one who normally dresses him in the mornings I get to pick out his clothes.  Last week I was nice and dressed him in his NC State outfit to support J's college team.  But today he is all black and gold: 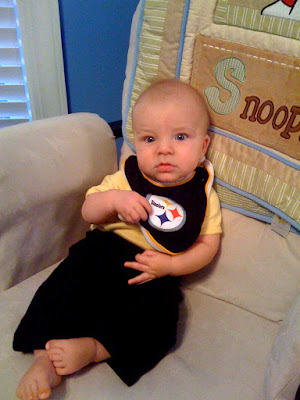 At least I didn't go as overboard as I did last Sunday for the Steelers season opener (which completely sucked by the way): 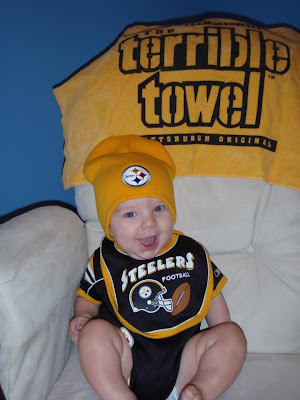 And now for why I need to keep working.  It's so I can continue to buy super cute things for the little guy, like his new taggie.  I ordered it last week and it came yesterday.  I had a dream the other night that it came in and they had messed up his name (it had Andrww in my dream). 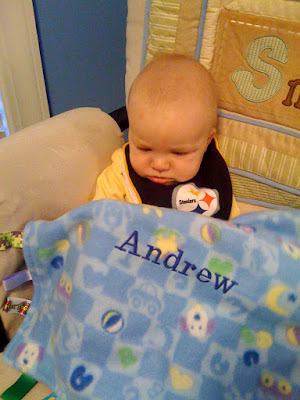 I was very excited to see it when I opened the box and I think it is adorable.  Andrew is already enjoying chewing on it. 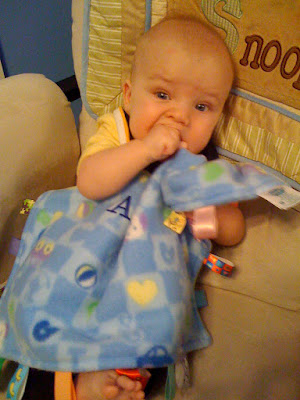 I also bought him a halloween costume yesterday because I found one at Marshall's for $9.99.  It's a cute little cow one, but I haven't put him in it yet to take any pictures.  I'm sure he'll have more than one costume since they are so damn cute and he is adorable and I can't wait to dress him up.  I figure he can wear one to daycare for halloween, one for my company's fall lunch/halloween party, and maybe one more for the actual halloween night.  Of course J might kill me if I buy that many halloween costumes!  Eh - what he doesn't know won't hurt him...

(*disclaimer:  No - I am not really working just so I can continue to buy frivolous things for Andrew.  It's just an added bonus to having my income.  I'm really still working so I can make my damn car payment and student loan payment. Ugh.)
Posted by kjw at 9:51 AM