A week or so ago we tried giving the munchkin some banana chunks to see if he would eat them. He succeeded in squishing one hunk in his hand and pretty much ignored the rest of it.  Obviously he wasn't quite getting it.

On Tuesday I decided to cut up the avocado that I bought to go for round two. 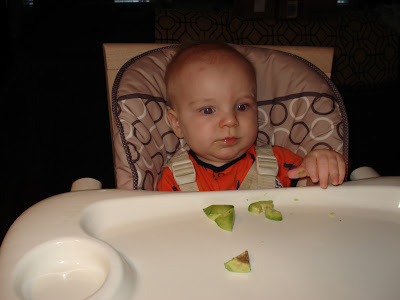 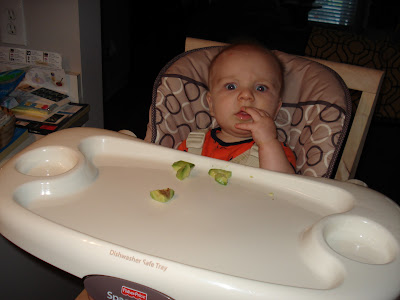 "Should I squish it?" 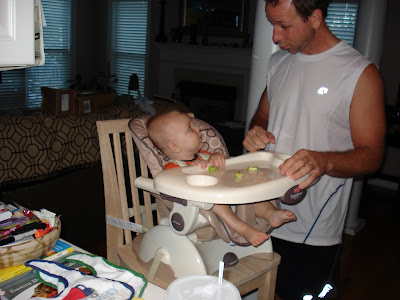 "What do you think, daddy?" 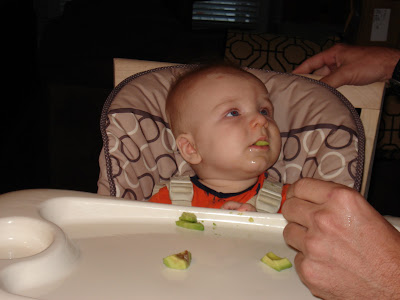 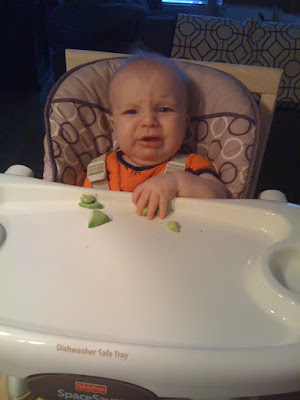 "Nope. I don't like avocados!"
﻿After this I turned my back for a minute to stir the dinner cooking on the stove. When I went to get him out of the highchair there was no avocado on the tray.  A quick scan of the floor confirmed that he hadn't chucked it everywhere and I knew damn well that he didn't eat it.
So I pull the tray off and find that he had stuffed every piece of avocado next to him in the seat. It wasn't all over his lap like he had knocked it off haphazardly. It was like he has purposely tried to hide the little chunks and had placed them all in a pile under his left arm. I swear if the dogs were in the house he probably would have been feeding it to them under the tray to make us think he ate it.
We're gonna have to keep an eye on this one - he's sneaky!
Posted by kjw at 10:07 AM