Yeah, I realize it's already Wednesday and Mother's Day was three days ago, but I just haven't gotten around to documenting things.

Sunday started out with me attempting to get ready with Elliot playing in the exersaucer in the bathroom.  I could hear Andrew coming up the steps to see me.  All of a sudden he appeared in the bathroom holding some flowers and a card and said "Happy Mother's Day, mommy!".  I really wish I could have gotten it on video, because it was seriously the sweetest thing ever.  I gave him a huge hug and kiss and I couldn't stop smiling. 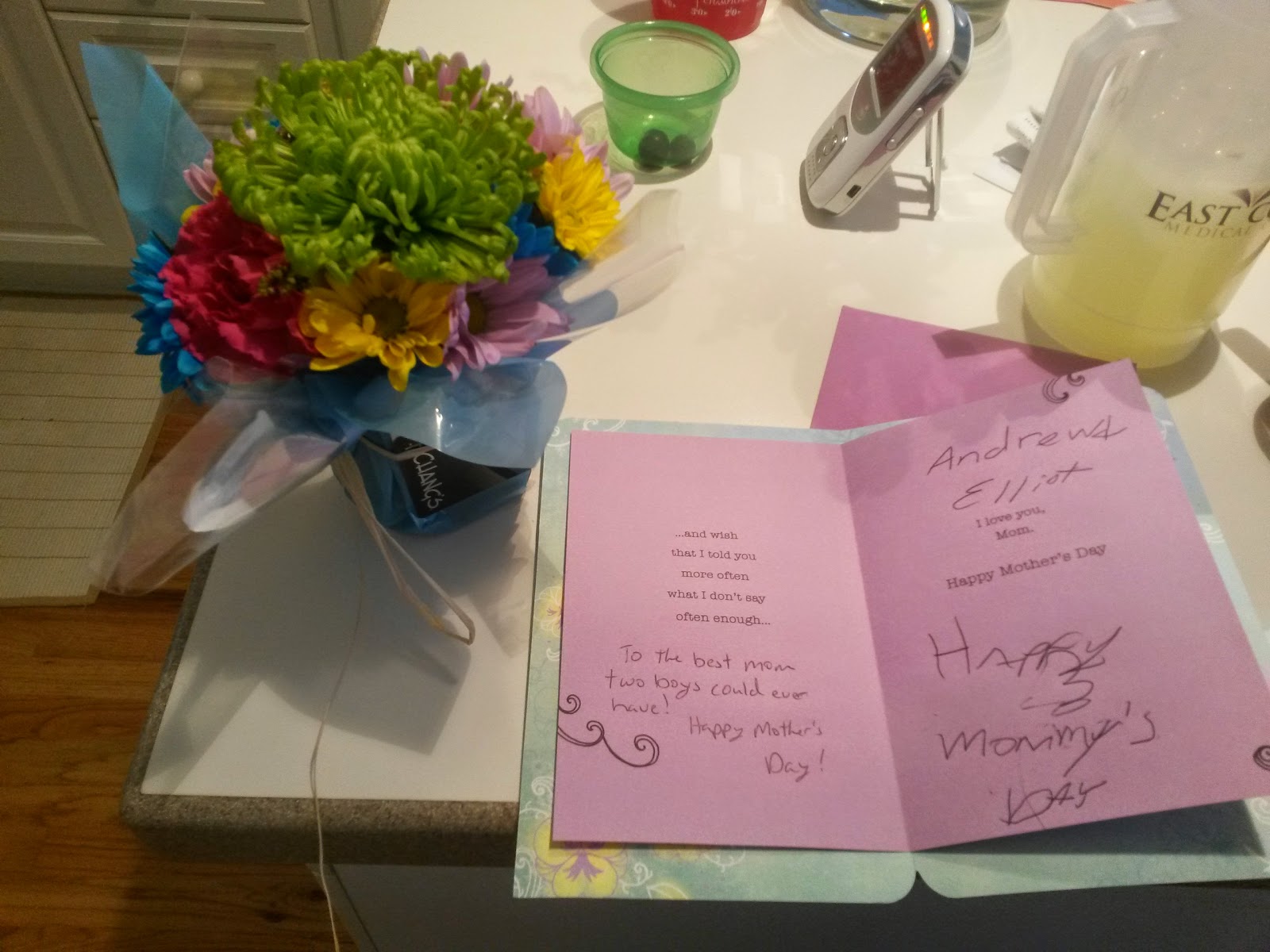 My flowers and card


We ate breakfast and got ready to get on the road to my parents' house.  I hesitated when Elliot threw up as I was getting him ready.  I coughed and threw up, which made me think that maybe he was getting sick. I didn't want to be the person that takes a sick baby to someone's house.  J said he'd probably be fine and if he started to get really fussy we could come home.  So we packed up our stuff and hit the road at 9:30.

We got to their house around 11:15 with a fussy baby.  I wanted to show my mom Elliot's new tricks of sitting up and kind of crawling, but when I set him on the floor he just laid face down and cried. Damn.  I apologized to my mom about him being sick, but she said it was fine.  We hung out at their house for a little bit waiting for my sister and nieces to get there. We went out back so Andrew could run around and feed the ducks: 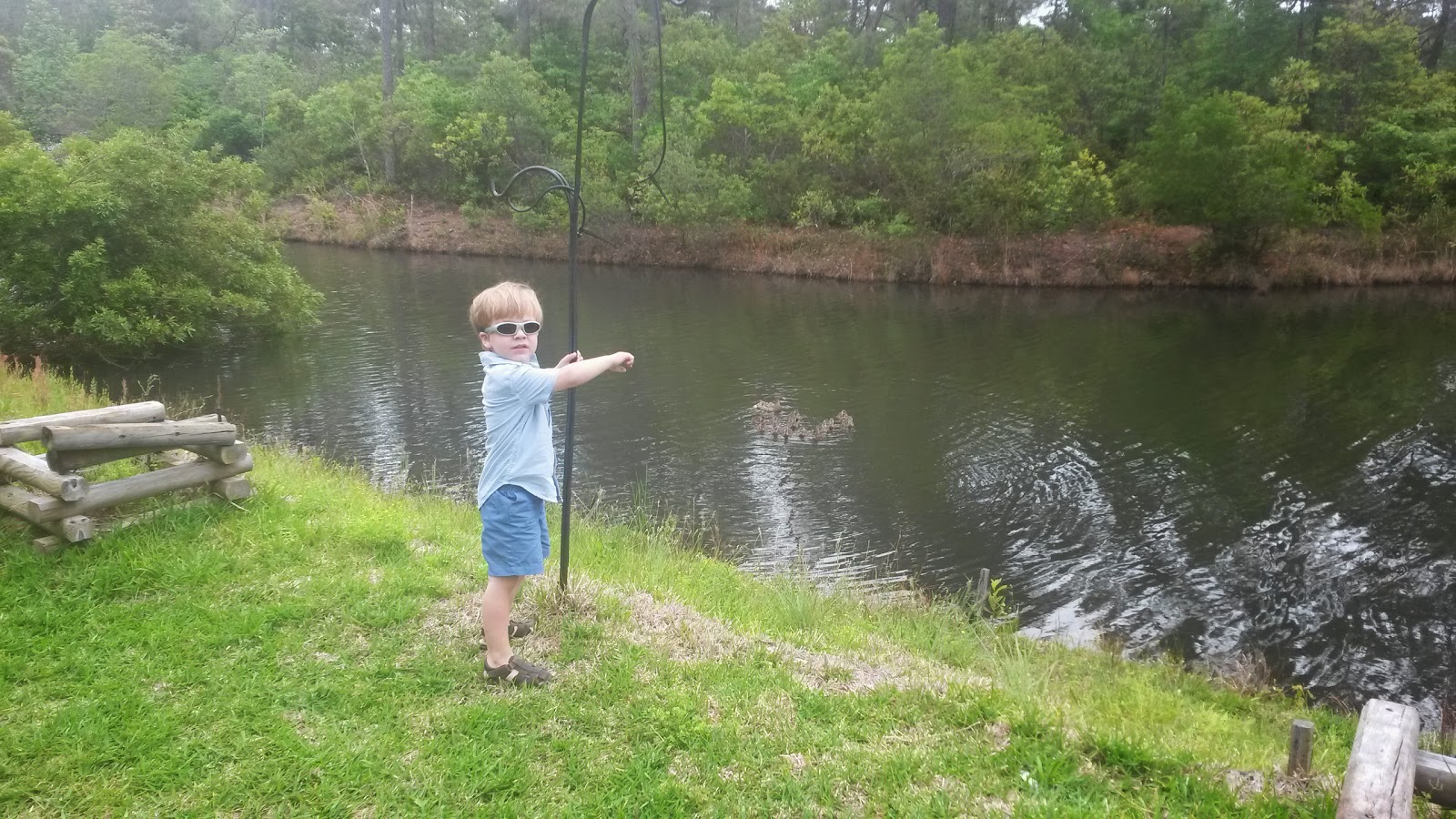 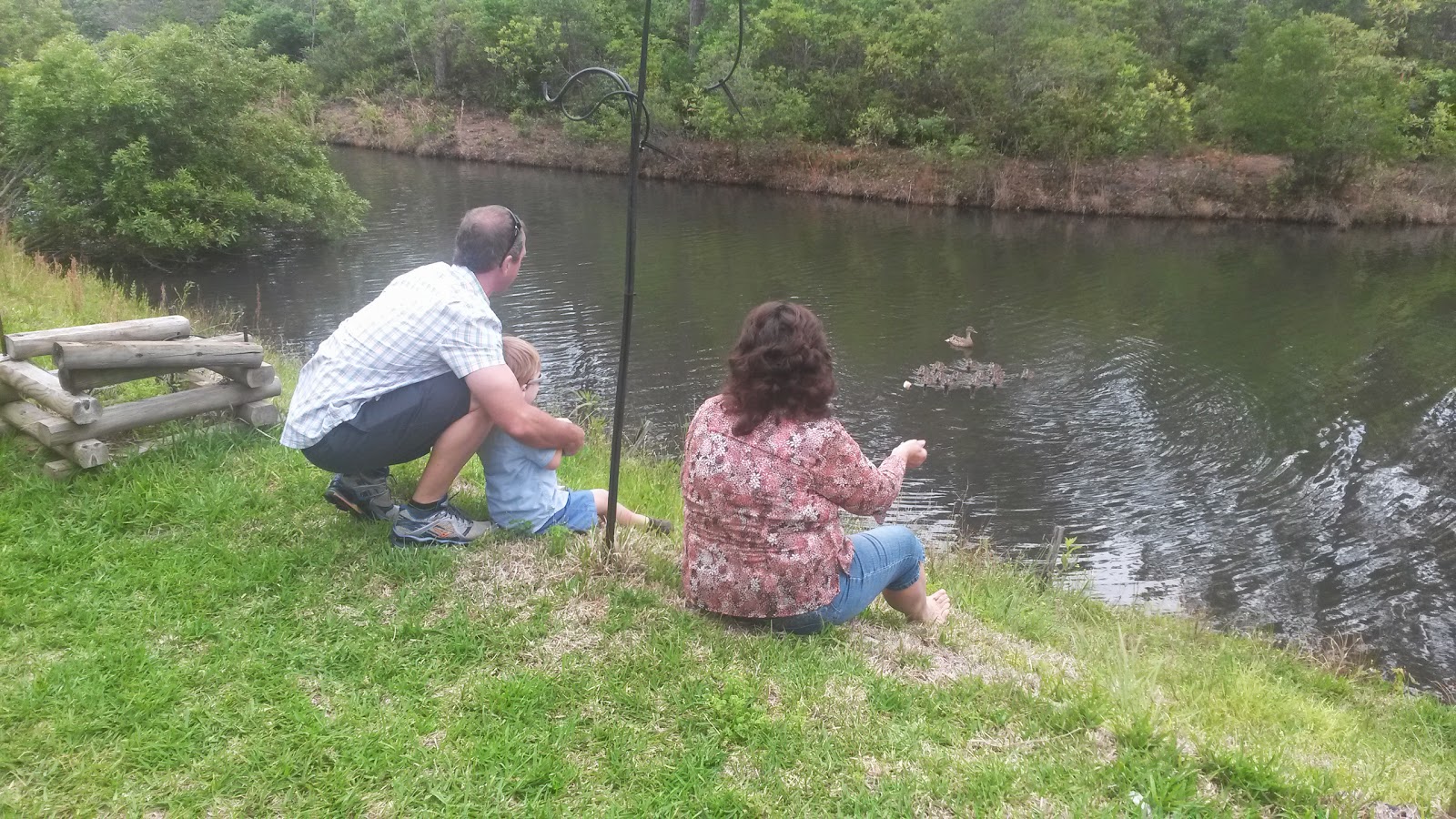 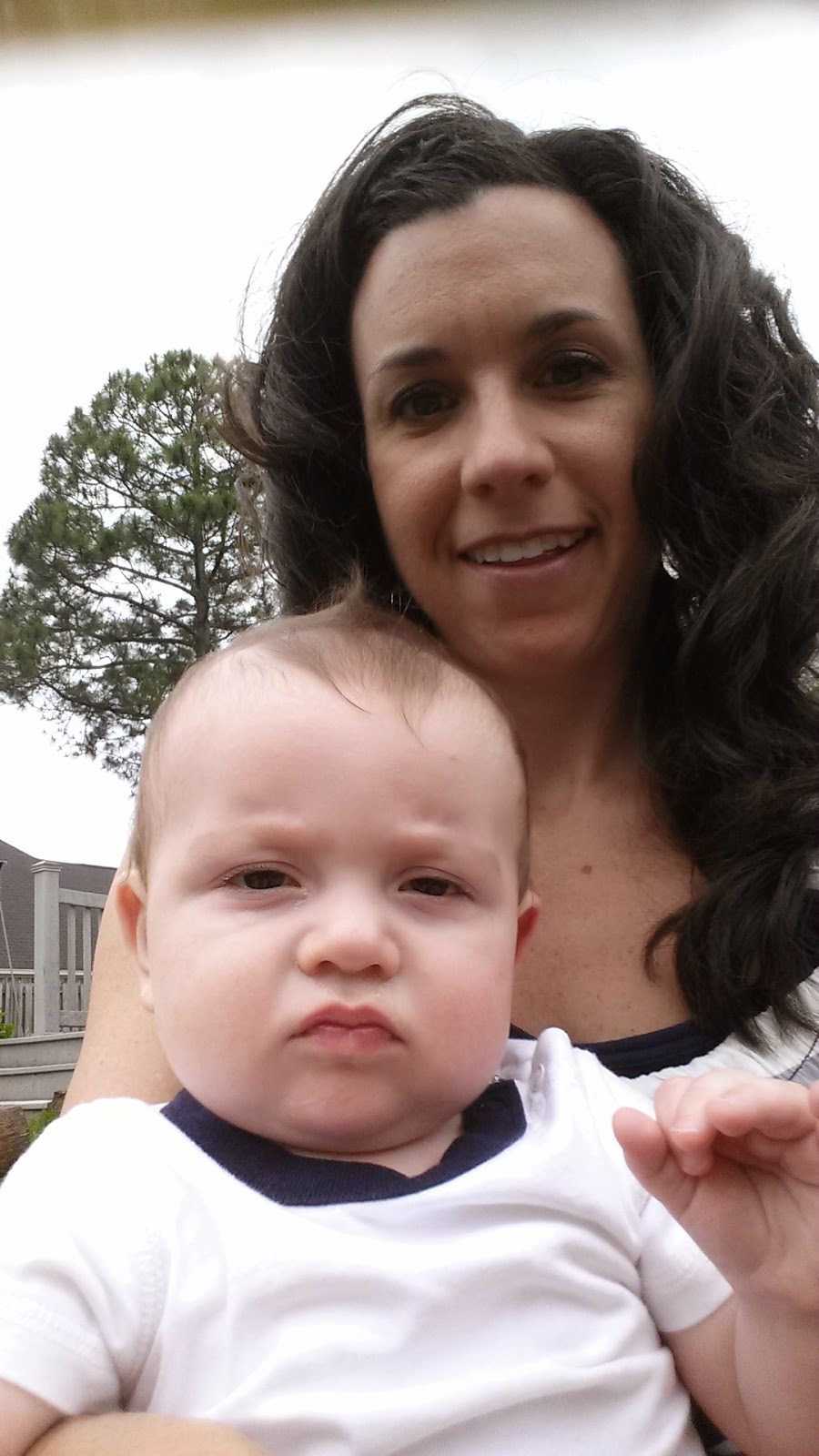 My sister and the girls showed up (but not my probably soon-to-be-ex brother-in-law) so we got a family picture.  Getting four kids to look at the camera is no easy feat: 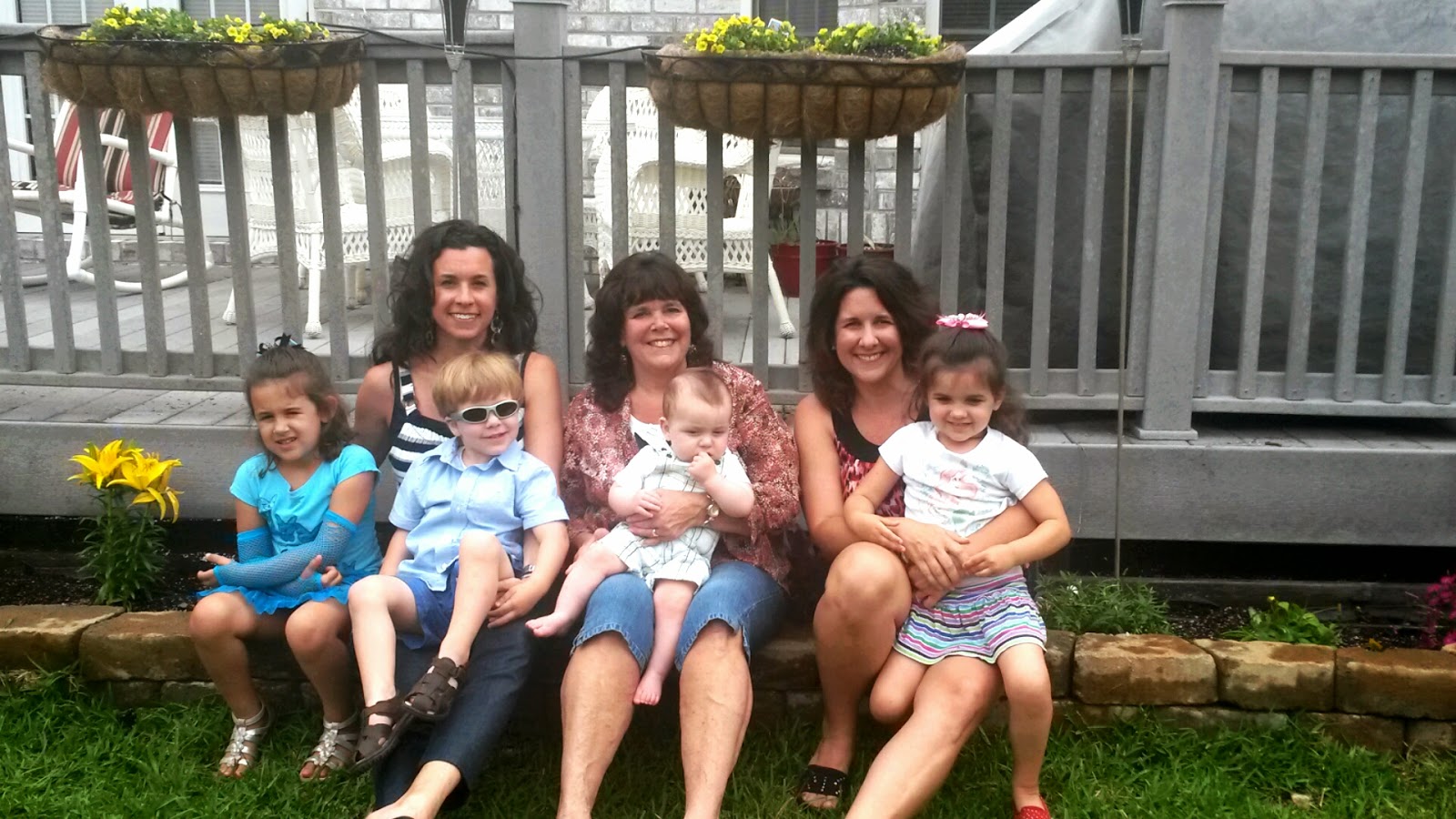 We headed to lunch at a mexican restaurant since we figured it wouldn't be crowded and we wouldn't have to wait for a table.  While we were waiting for our food my  mom and I ran next door to the store to get some infant tylenol because Elliot was warm and very cranky.  We all ate our lunches (Andrew did amazingly well and actually ate his quesadilla) and Elliot fussed.  I tried my best to keep him entertained, but the kid wasn't happy.  After lunch we had to head home anyway because my in-laws were en route to Charleston so we needed to get back.  Elliot was ready to go: 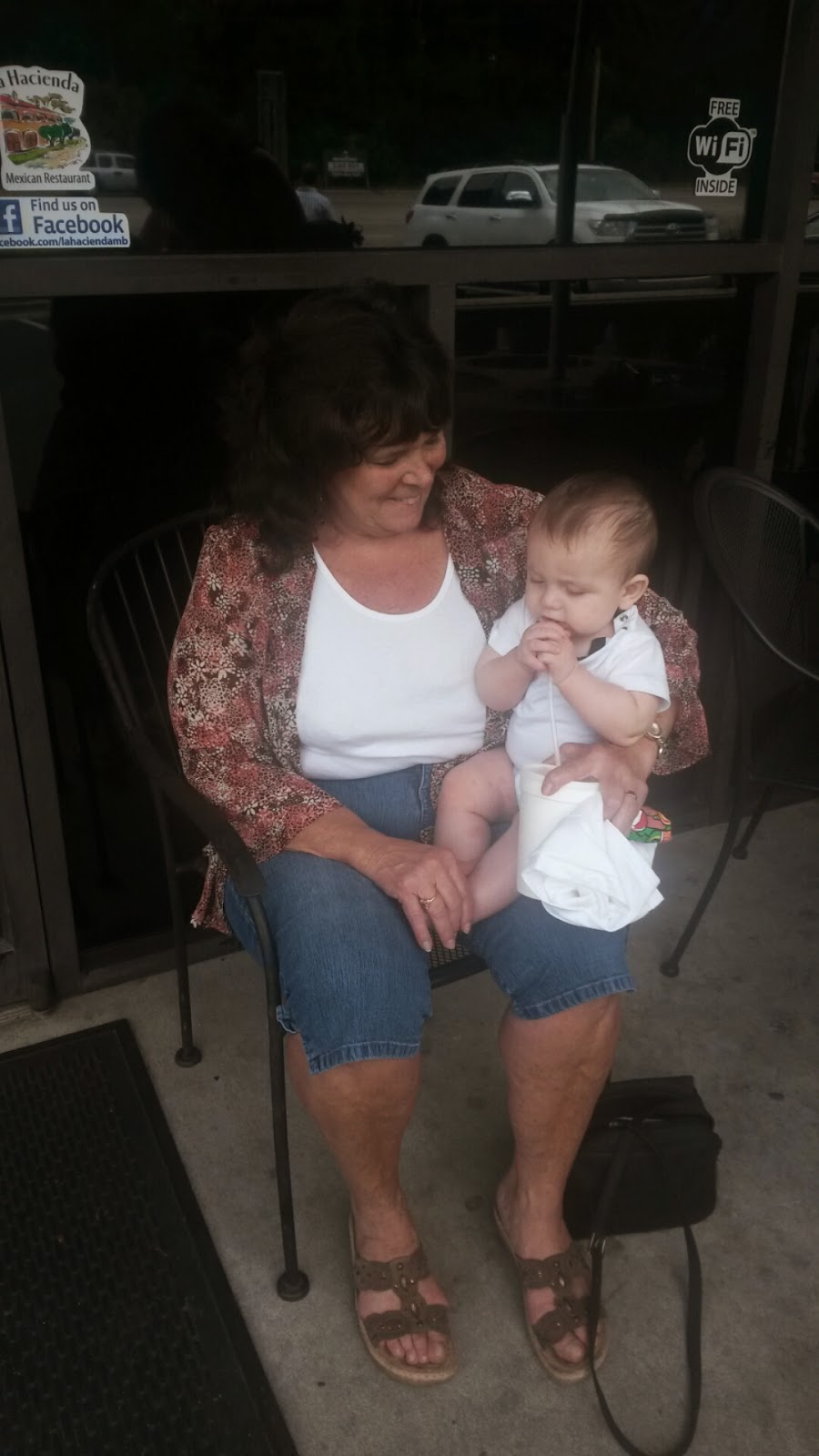 He alternately slept and cried for the whole ride home.  When we got back he threw up a couple times while we waited for J's parents to get there.  He was content to sit and play while everyone was at our house (his aunts and uncle were also here) and after they left I got him down for a late nap.  I was really afraid that it was going to be a miserable night and that I would be keeping him home the next day, but I was pleasantly surprised when he slept all night and woke up happy.

So that was Mother's Day this year.  Not the relaxing day that I would have liked, but it was a nice day nonetheless.