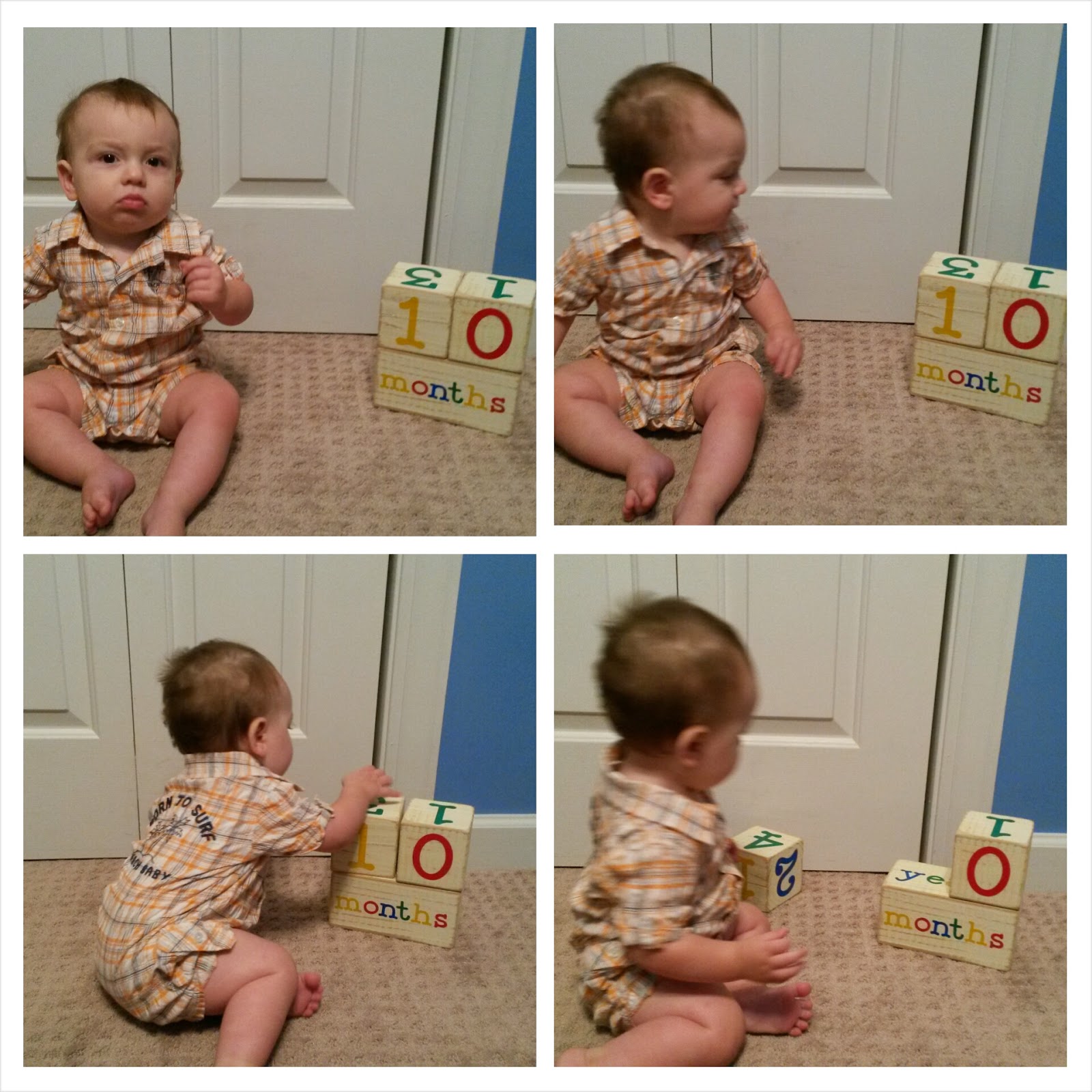 Holy moly!  My littlest love is already into the double digits!  How did that happen?

Size: At his appointment at the allergy doctor two weeks ago he was 19 lbs 3 oz and 28".  I'm assuming he is still around that.

Wearing Size three diapers and wearing pretty much all 9 month clothes still.  I put him in 12 month stuff and they mostly fit.  I haven't tried mashing him in any 6-9  month stuff lately.  He still fits in the 3-6 month swim trunks and rash guard so it's all a crapshoot.

Milestones:  Lots of standing.  He's even let go a couple times and stood unassisted for a couple seconds at a time. Nowhere near walking (thank god!),  but I am willing to bet he will walk well before his big brother did at almost 17 months. Another tooth cut through this past week so we are at 7 with another one on the way.

Eating: He's still EBF, which is going well.  He has now started to refuse purees and being spoon fed, but he hasn't started eating more finger foods so I'm a little concerned about that.  After having the allergy test for peanuts tell us he wasn't allergic I gave him some peanut butter on toast and we had this happen: 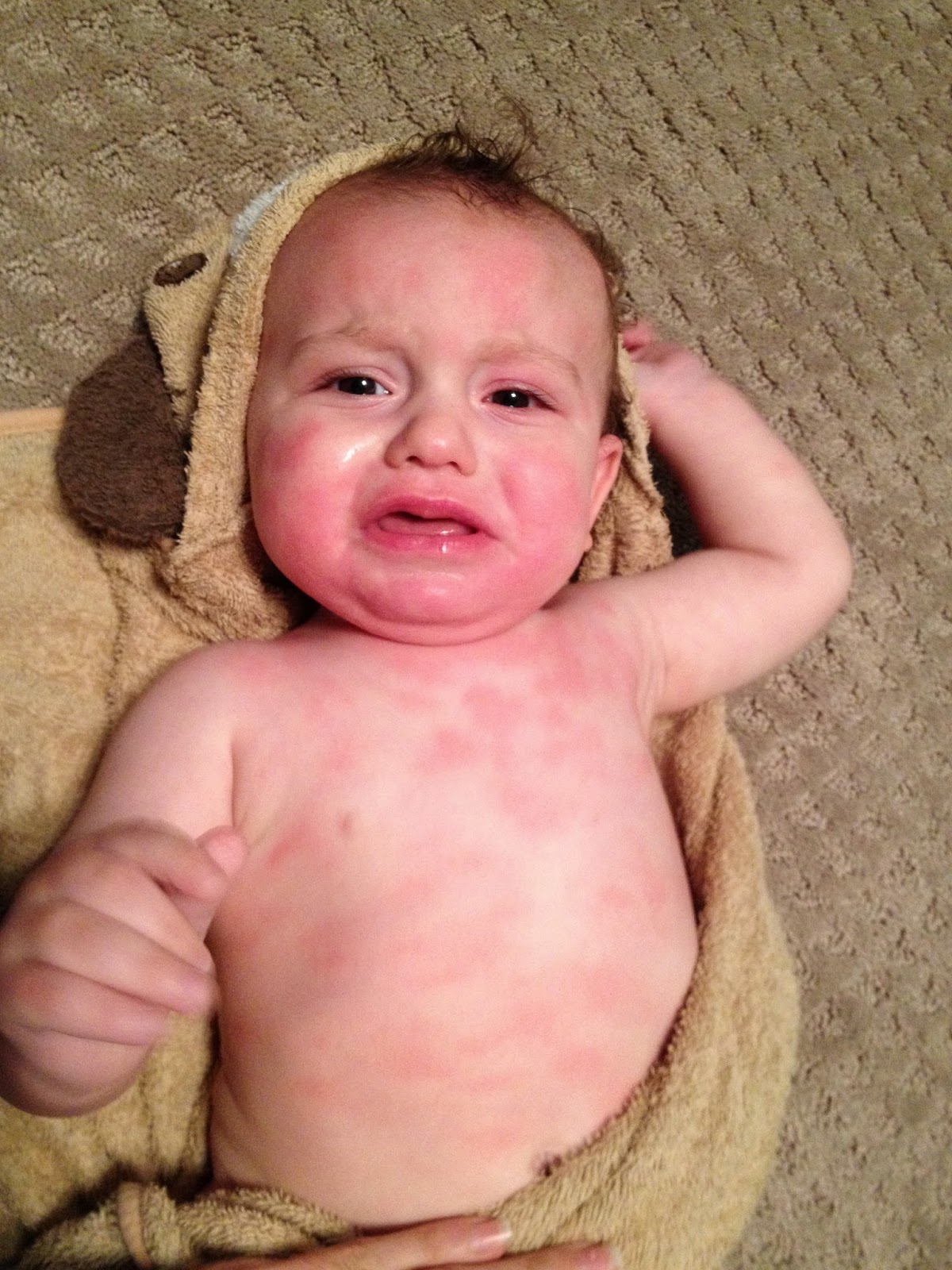 So I'm thinking the allergy skin test was NOT accurate.  I will be avoiding peanuts/peanut butter for the time being and need to call the allergist back to see about getting retested.  He is a big fan of grilled/baked chicken and chewed up some turkey burger the other night.  As of now eating is hit or miss...

Sleep: He's mostly sleeping 10+ hours at night, but does get up occasionally (like last night).  Some days he naps wonderfully and other days not so much.  This past weekend he did great with two two hour naps each day.  I'll take it!

Personality: He's a funny/crazy little bugger.  He wakes up from naps with a smile on his face and if I am laying on the floor he will crawl full speed ahead towards me yelling and laughing at the same time.  He gets mad if you walk away from him and follows us around like a puppy.  If you tell him "No" when he's getting into something he will look at you and laugh, then go back to doing what he isn't supposed to be doing.  He's just a cute/funny/sweet little guy.

Loves: His brother, bath time, the night light in his room, any paper he can get his mouth on, and the fridge: 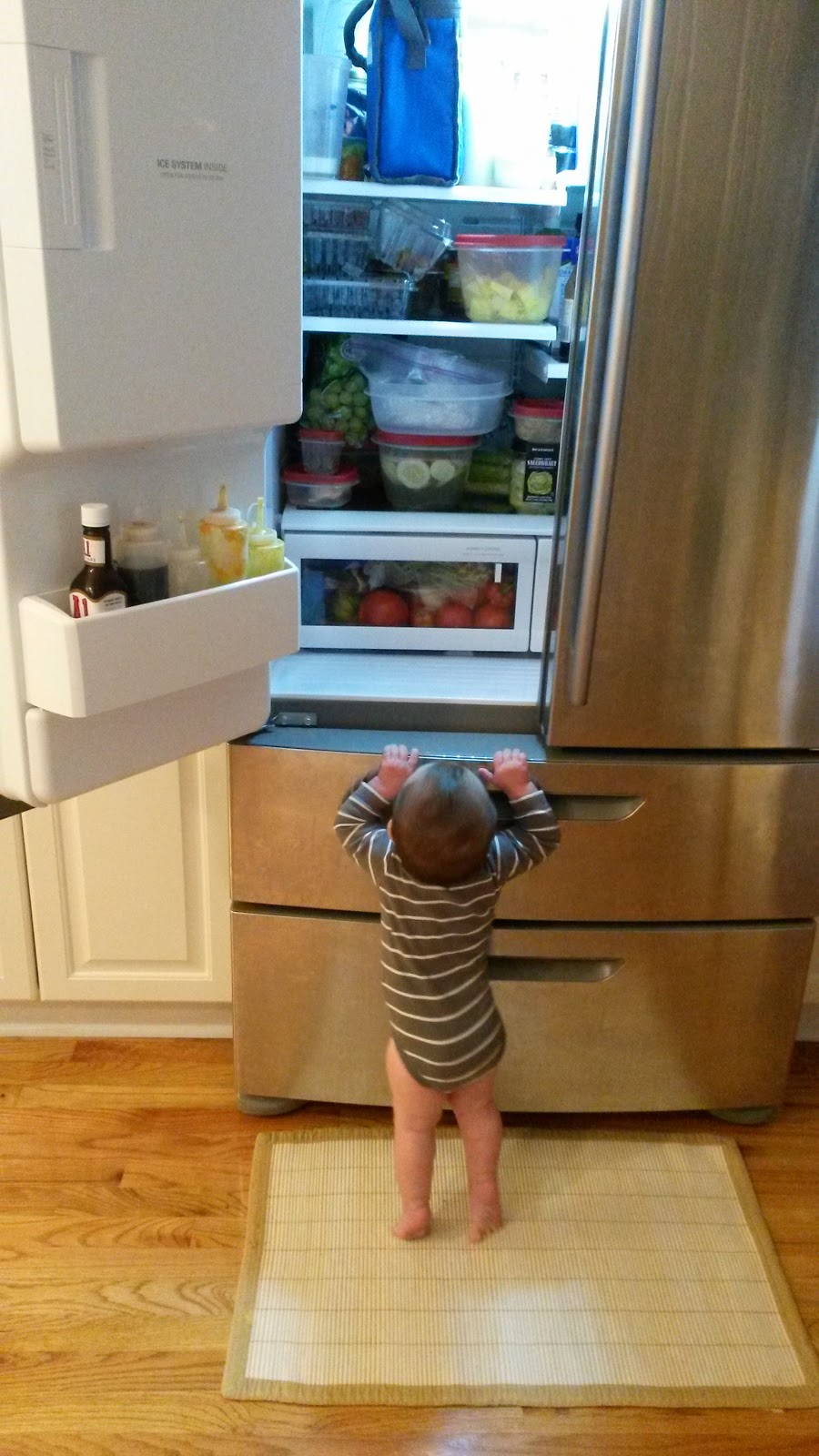 Hates: Baby food, laying still for diaper changes or getting dressed, and being locked away from the stairs by the baby gate.

I swear 10 months went by like that. It's gone even faster this time around and I can't wrap my head around the fact that in just two months we'll be celebrating his first birthday.  Slow down little one!