For a while now we have been meaning to enroll Andrew in some sort of swim class.  I mean, we live five minutes from the beach so these kids really need to learn to swim.  I finally looked up what classes are offered through our local recreation department and found on that worked with my schedule (I swear 90% of everything is geared towards stay at home moms and I hate that we miss out on so much).  I went to sign him up, but the class was already full, so he got put on the wait list.  I was hopeful that they would add him to the class, but instead they decided to schedule an additional class since there were a bunch of kids on the wait list.  Of course I didn't find out that the class had been approved until Tuesday morning - about seven hours before class started.

I was afraid that Andrew would freak out about me springing swim class on him, so I sent a text to Andrea and asked her to talk to him about it during the day to try to get him excited.  I ran home before picking the boys up from the farmers market and grabbed everything we needed.  When I picked them up I asked Andrew if he was excited about swim class and he yelled "Yes!". I took that as a good sign.

We headed to the pool and when we got there I put Elliot in the little umbrella stroller so I wouldn't have to hold him the whole time and would be able to get Andrew dressed.  Andrew, of course, wanted to push him: 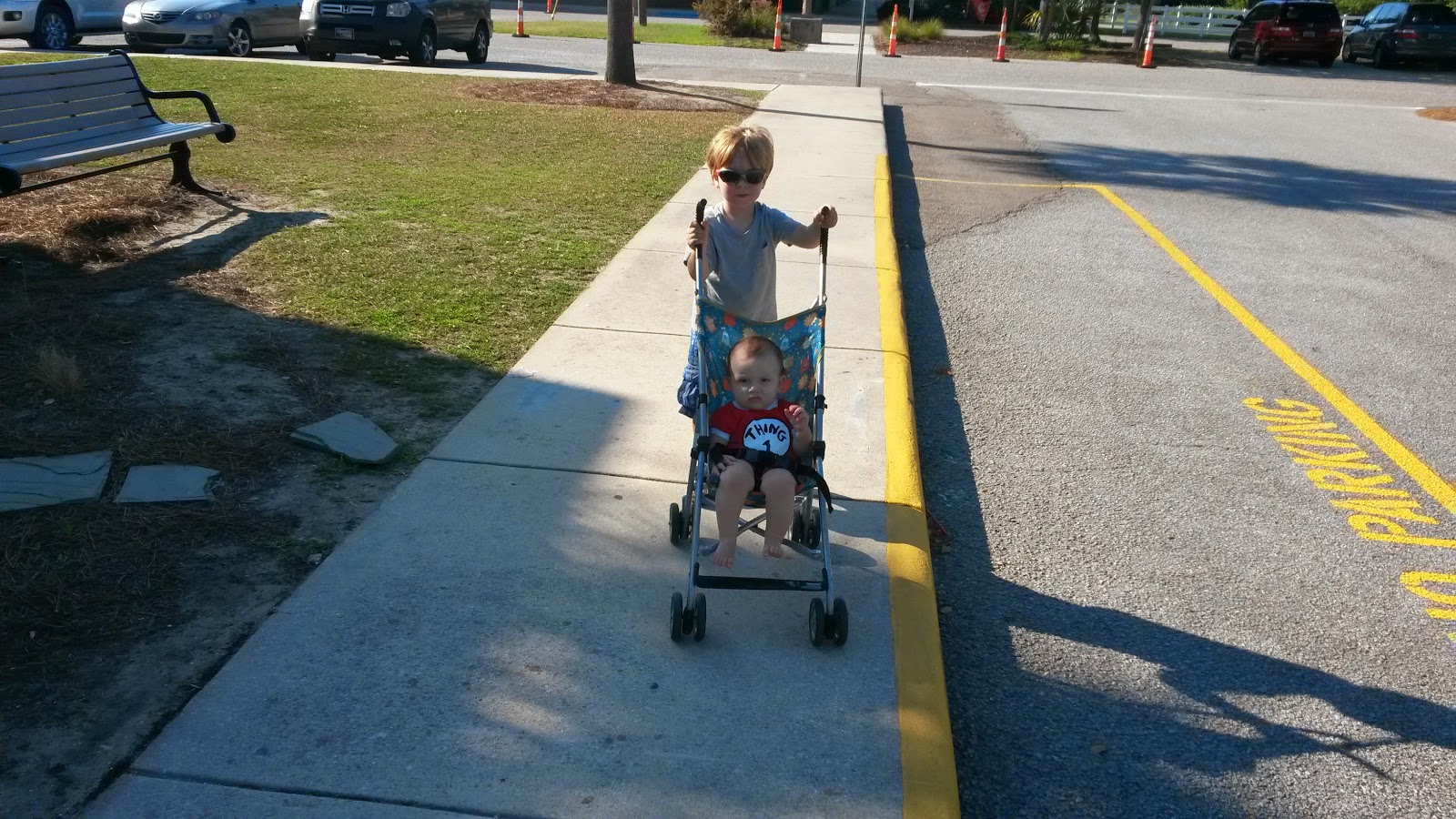 We made our way in and I got Andrew into his swim trunks.  We went out the the pool area and were 15 minutes early, so we watched the class that was going on and I kept pointing out the kids and telling him he would be doing what they are doing.  He was still excited and kept saying "I want to get in the pool!".

At 6:00 it was time for his class.  There were only two other little boys there and I was kind of glad it was a small class since he wouldn't have to wait much between turns.  He was a little apprehensive about walking over to the pool,  but I led him over and he sat on the edge: 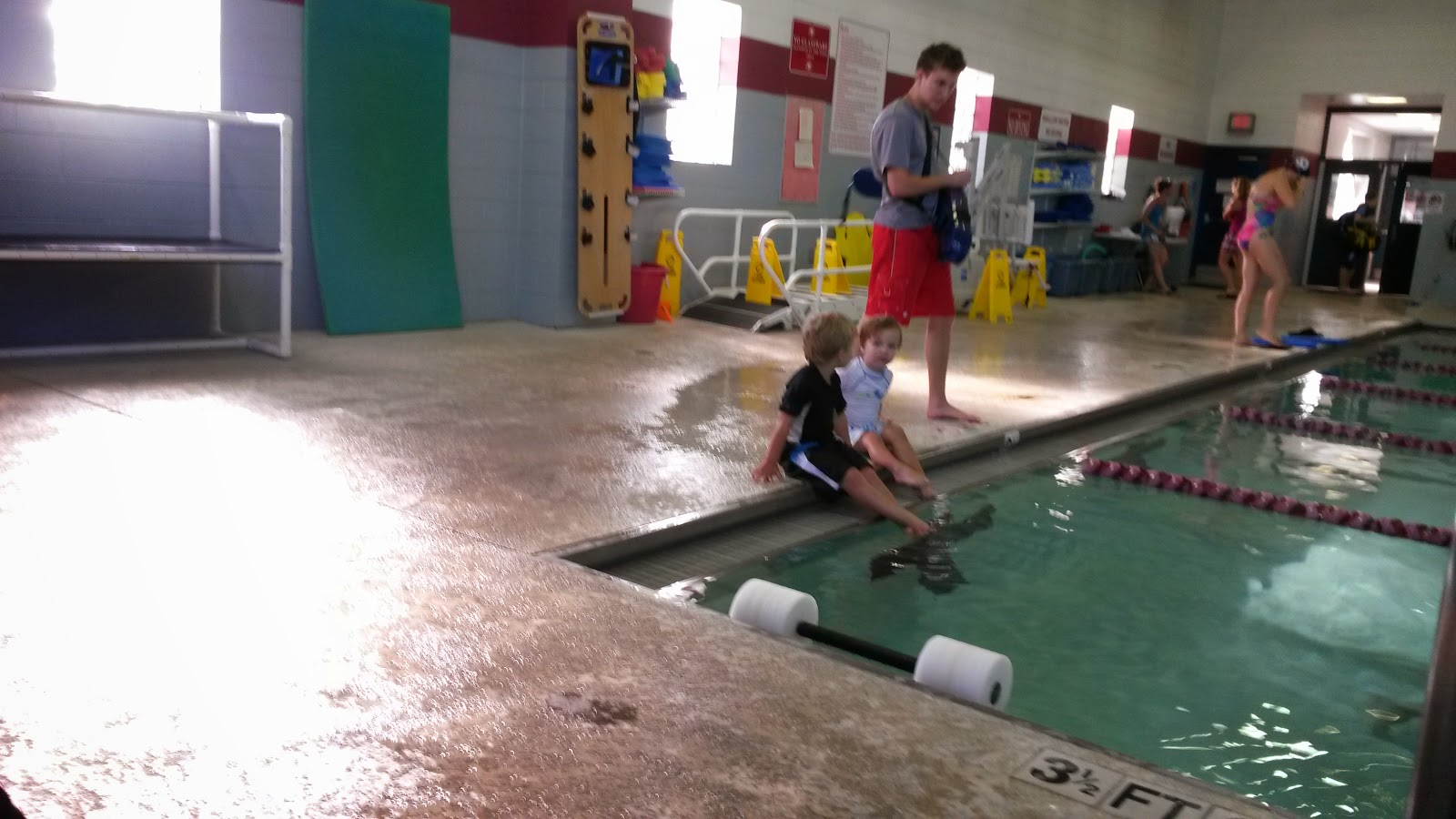 Andrew was first in line for each rotation and each time he got in I was so incredibly proud of him.  I had been so afraid that he would cry or have an epic meltdown about getting in the water, but he didn't.  He had a big smile on his face every time I looked at him. 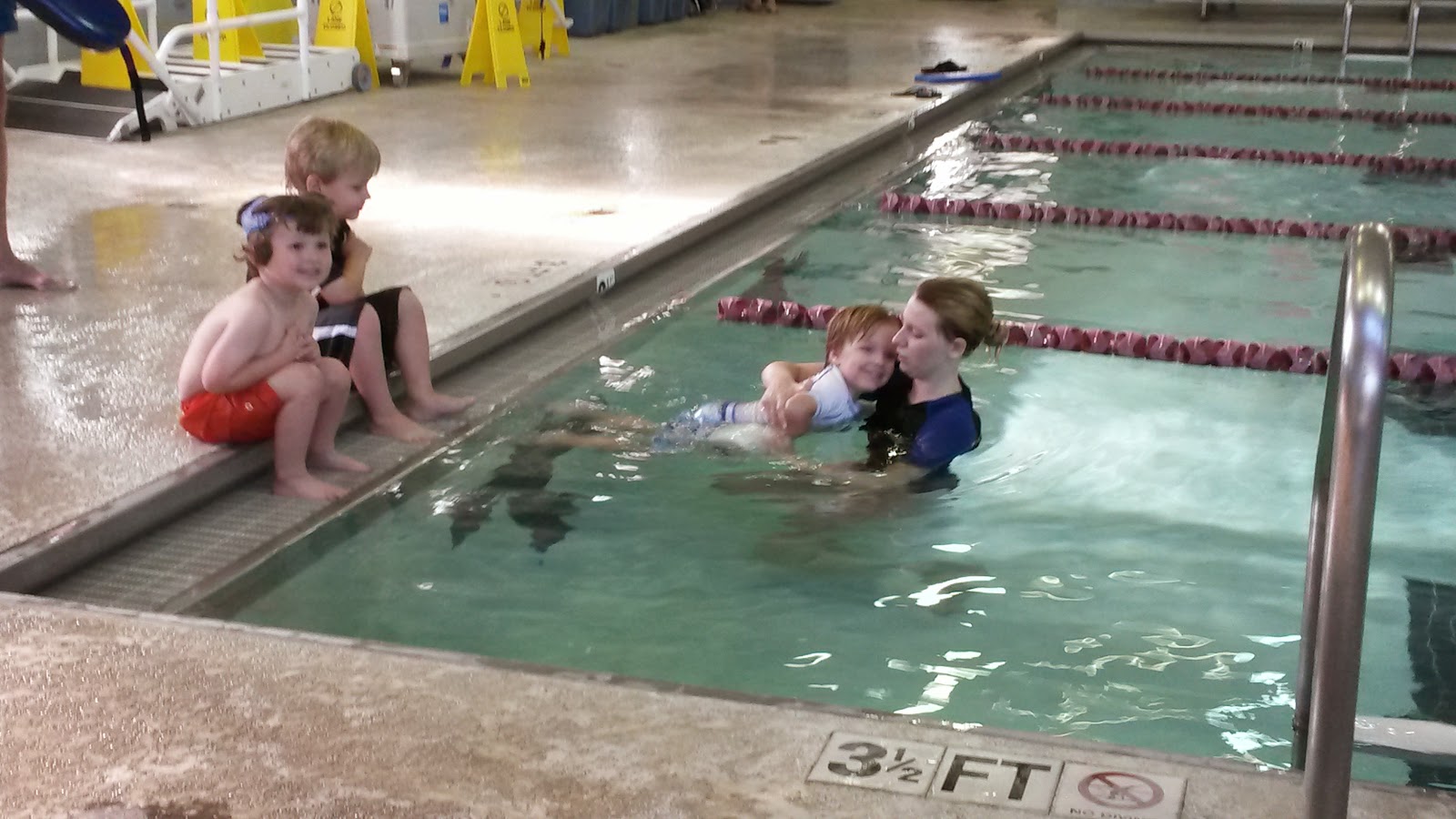 I couldn't help but smile every time I looked over to see him patiently waiting for his turn. And every time he got in the water. 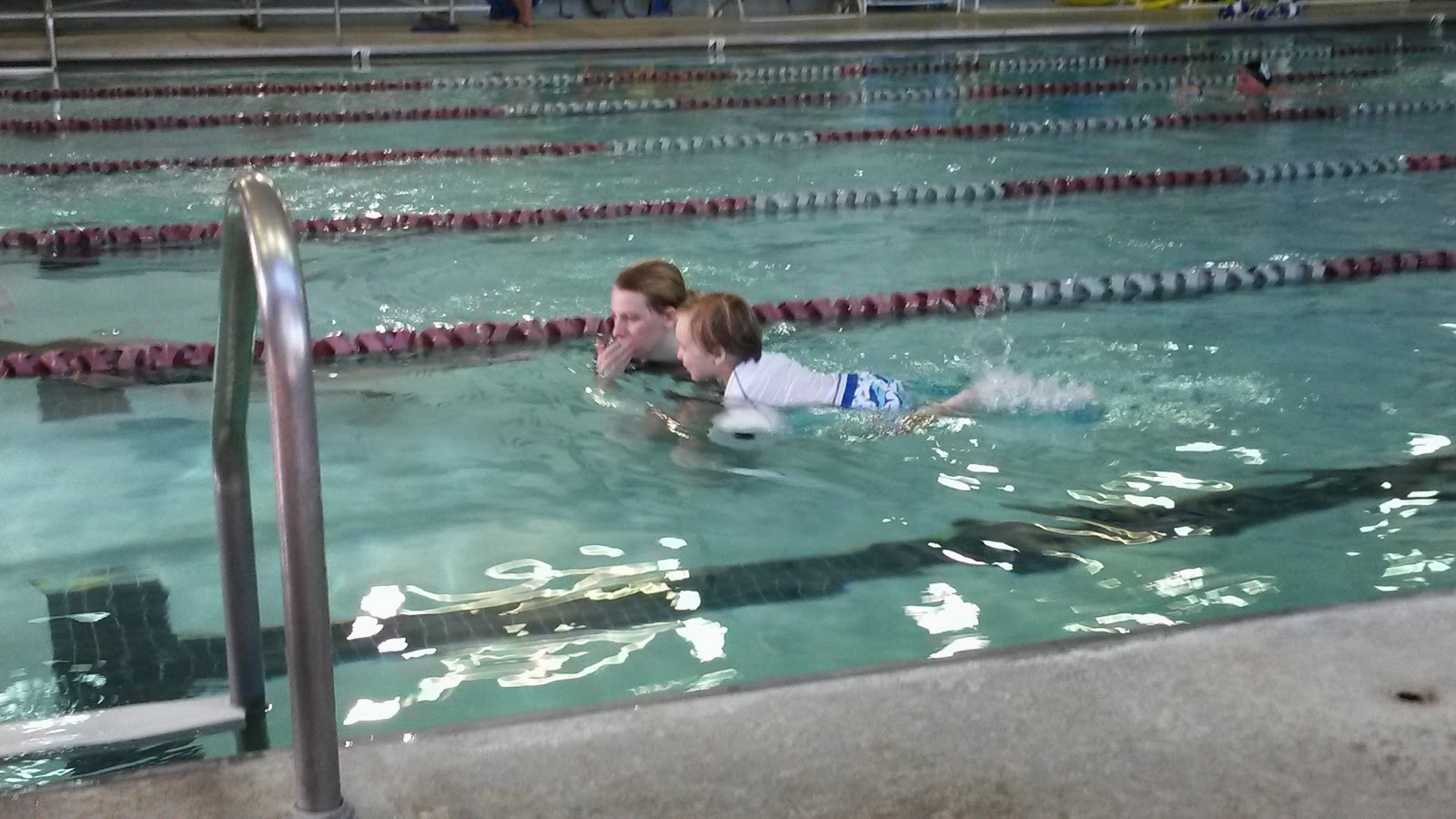 At the end of class she had them each jump in the water two times. He wouldn't jump in on his own, but he would if he was holding the instructors hands: 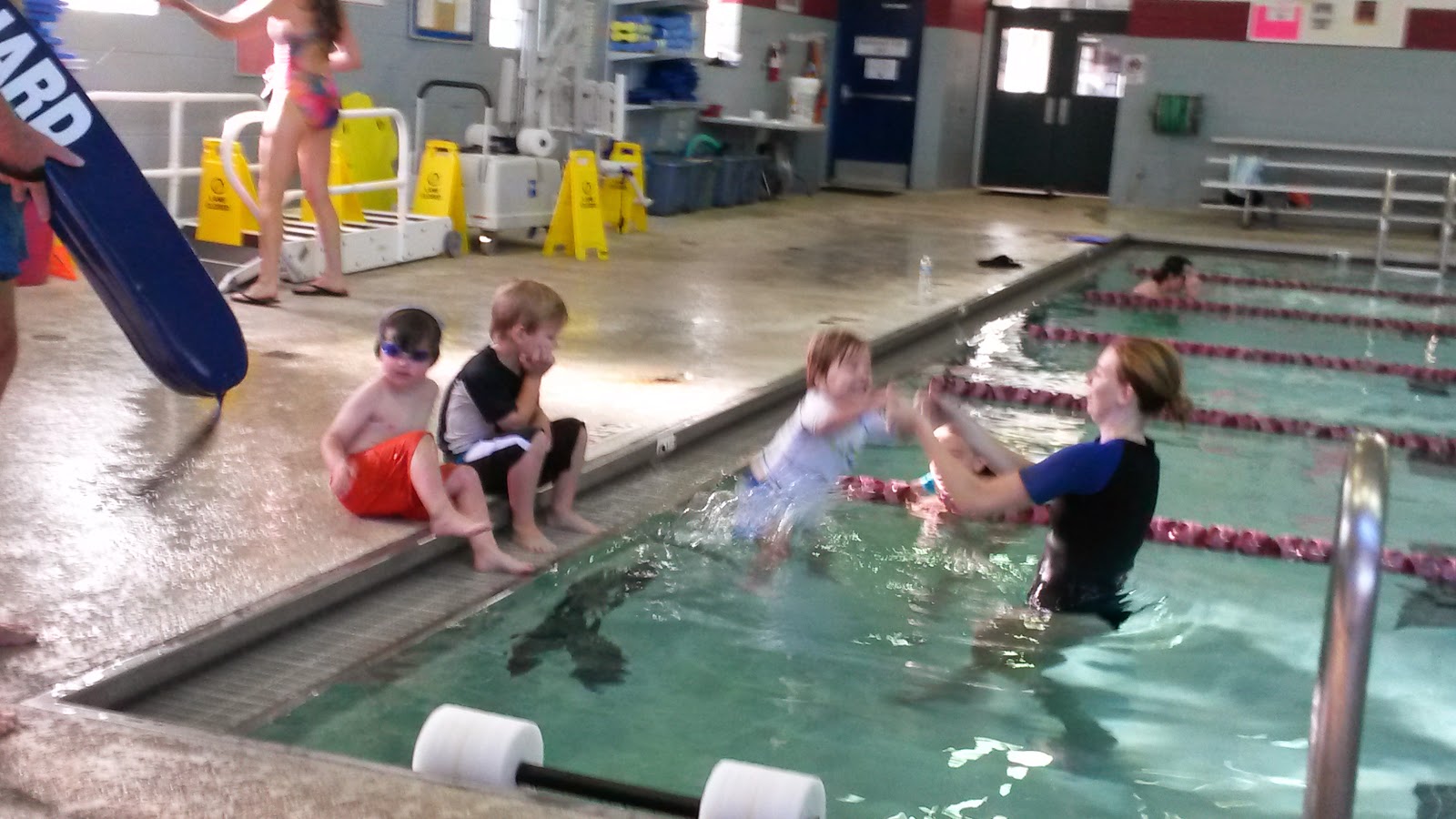 Then she led him over to the ladder and he climbed right out: 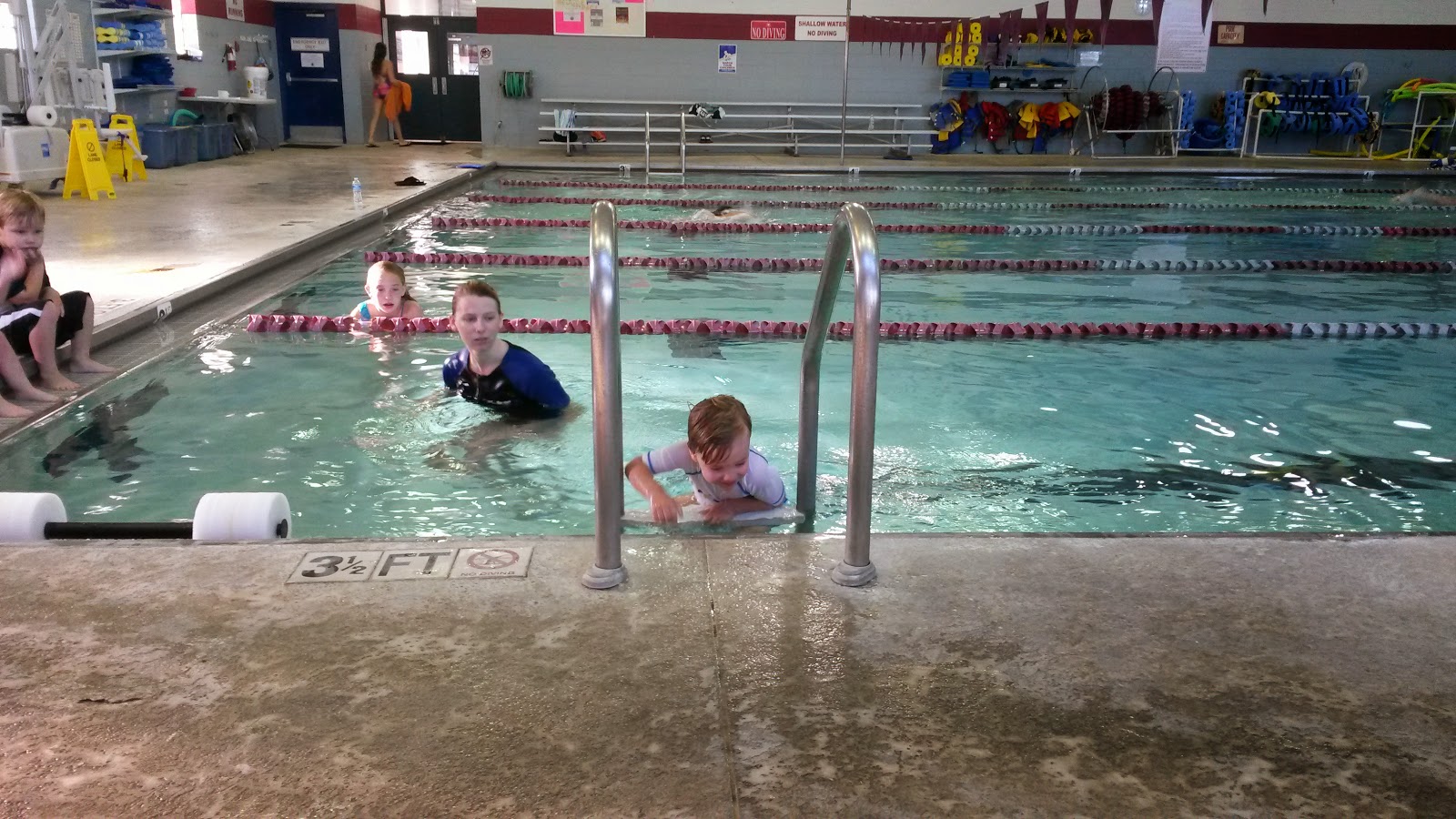 He came running over to me shouting "I jumped in the pool!".  I was so happy to see him so excited about it and I kept telling him how great he did and that I was so proud of him.

After class we went back to the locker room to get him in dry clothes so we could head home.  As soon as we got home he started telling J about jumping in the pool and kept saying "I go to swim class!".  Seeing his excitement made me wish I had signed him up sooner, but part of me thinks that doing it earlier might have ended in disaster. I think now he's old enough to do this class on his own and can really enjoy it.  It was definitely worth the $35 for the class (it's only three weeks on Tuesdays and Thursdays) and once he's done with this one we'll see if he's ready to move up to the next level.

So proud of my little swimmer  :)