A year ago right now I was getting weepy about the fact that it was my last week at home with Elliot. I only had six weeks of real maternity leave (this country is ridiculous), but I worked from home with him for an additional eight after that.  I thought those 14 weeks went fast  and I swear the 12 months after that have gone by just as quickly. It's hard to believe this little sweet is 15 months today: 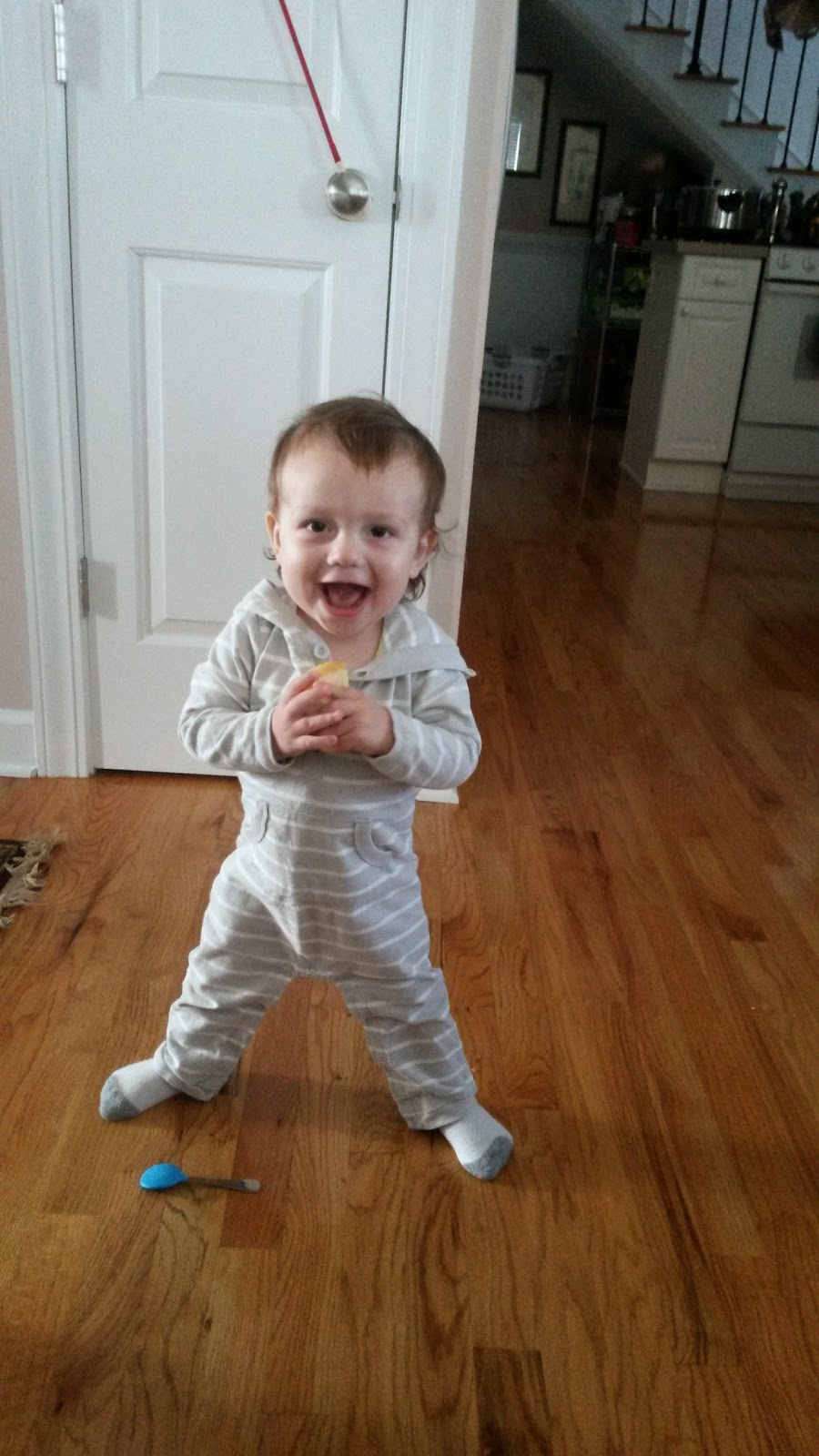 Size: I'm not really sure about his exact size, but we have his 15 month well check on Wednesday morning so I'll find out then. I'm going to predict that he is smaller than Andrew was at this age.

Wearing: He is still in size 3 diapers and I don't see that changing any time soon.  He still wears 12 month clothes and fits in them just fine.  He's my little dude and I like it that way  :)

Milestones:  Walking faster but not quite running.  Climbing EVERYTHING in sight.  Andrea swears that he says "Please" and "Bye bye", but so far the only thing that sounds like a word to me is when he points at something and says "That".  He's up to 11 teeth so far with three out of four molars in. He's been getting up the last couple nights and I'm starting to wonder if it's the fourth molar trying to break through.  This past weekend he started pulling his blanket out of his crib and carrying it around when he's ready for a nap.  He has also started pulling out his rocking cow and actually playing on it: 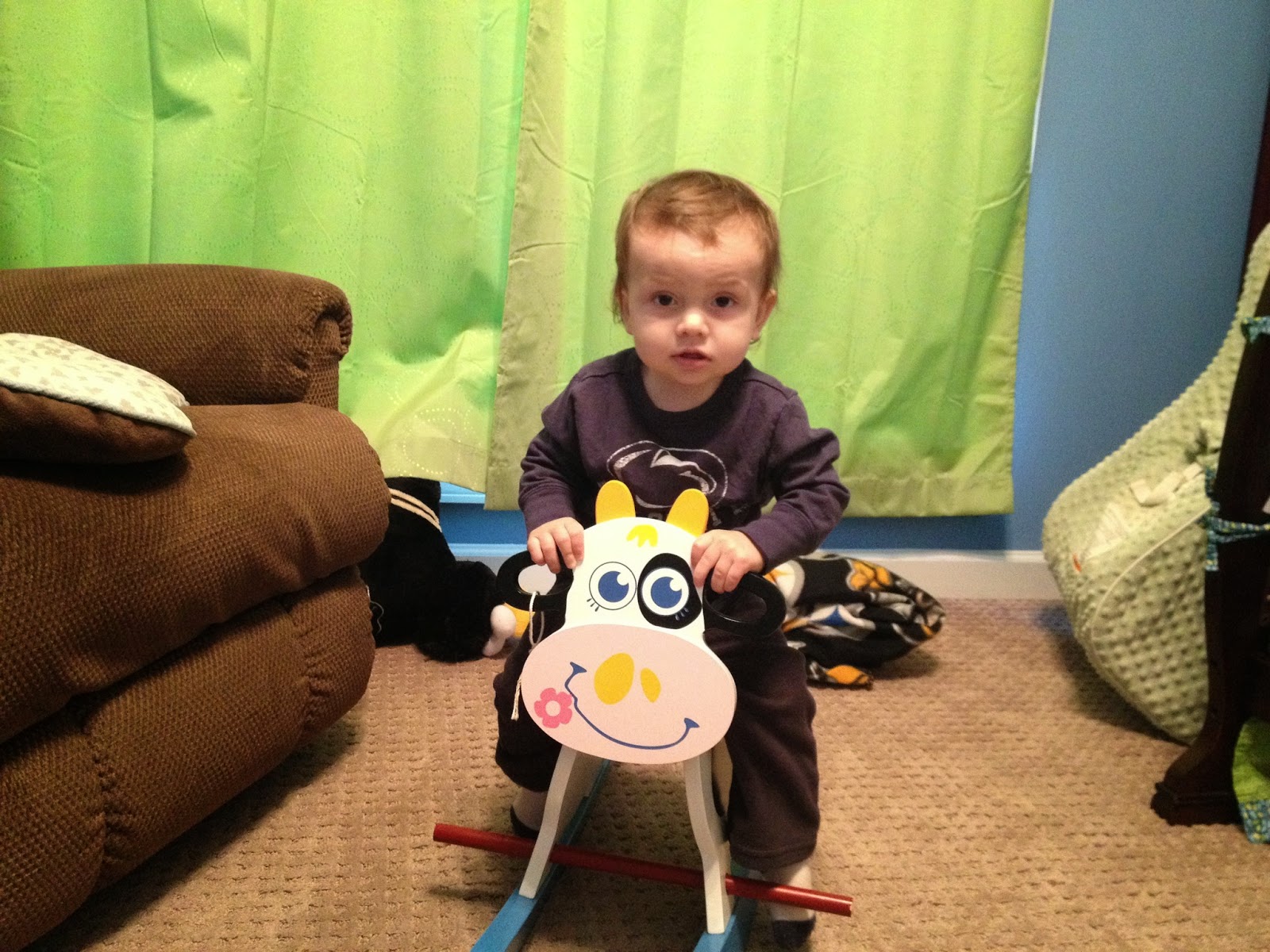 Eating: I still nurse him in the morning and before bed and on the weekends he'll nurse before naps.  Some days he eats great and other days it's a struggle to get more than goldfish in him. One thing he does love are the little gerber raviolis, particularly the beef ones.  I've given him little bits of cheese with no hives and he can eat the gerber yogurt pouches without a reaction, but I think he's still having some reactions to milk.  He's doing better with the almond milk and loves his straw cup.  He's getting better at using a spoon to feed himself, but a lot of food still ends up on the floor.  I'm also still pumping at work, which some people might find weird, but I'm not ready for him to wean so I'm keeping it up. Andrew self weaned at 14 months so I've made it an extra month so far with Elliot.

Sleep: He's still sleeping about the same - around 10.5 hours a night. Most of the time he is still napping twice a day.  Yesterday he took a 2.5 hour nap in the late morning/early afternoon and that was it. He was a bear by 7:00 PM which leads me to believe that he isn't ready to only take one nap.

Personality: He's crazy and a handful.  We were seriously lucky with Andrew and the fact that he didn't really get in to things and he minded us for the most part. Elliot gets into everything and there is no distracting him.  Last weekend he discovered the Thanksgiving window clings in Andrew's room and nothing I did would distract him from them. I carried him out into the living room half a dozen times. Each time he would hop down off the couch and hightail it to Andrew's room to continue ripping them off the window.  I seriously don't know what we are going to do about Christmas decorations because there is no way he is going to leave thing alone.

Loves: Chasing his big brother around, hiding things in the washing machine: 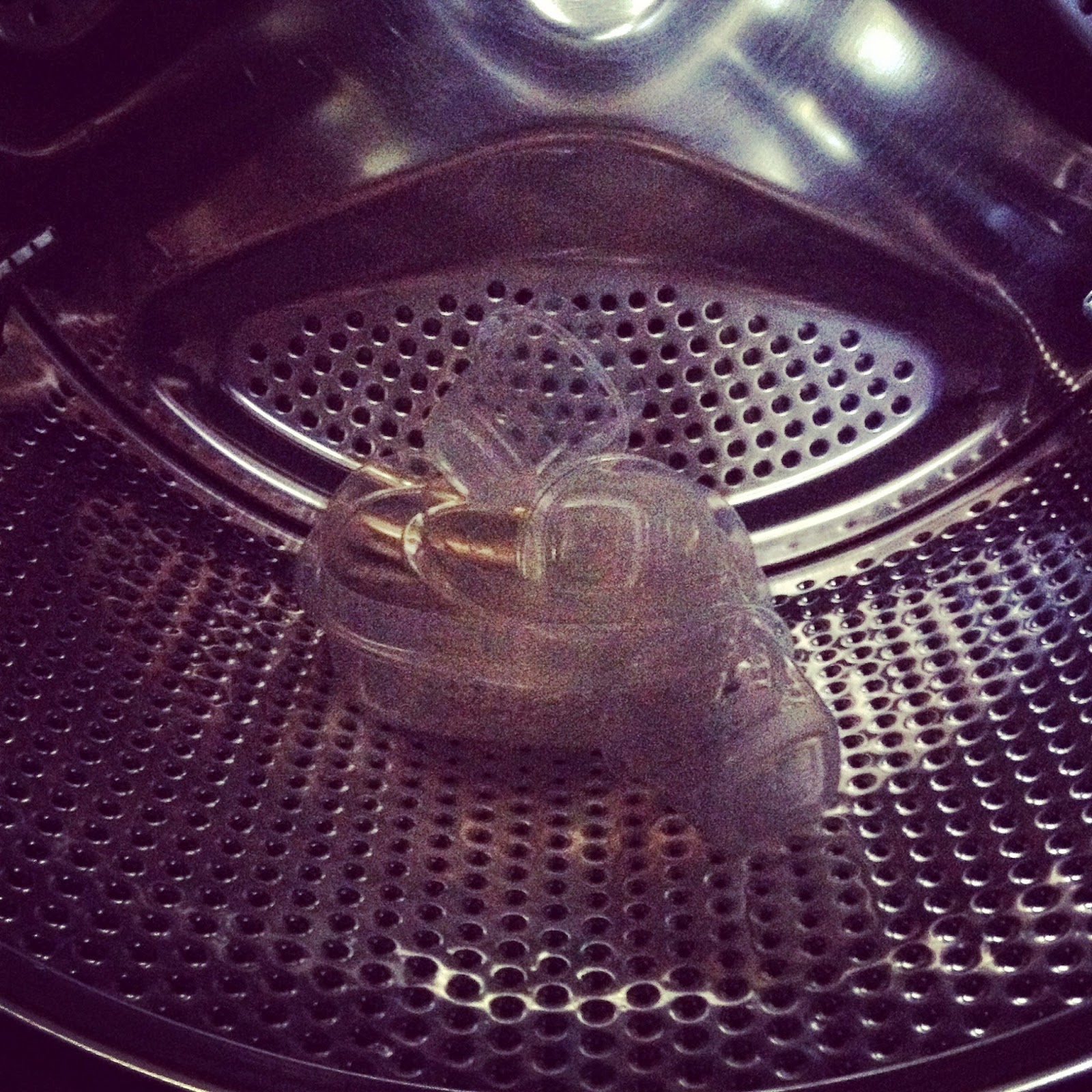 playing in the bathtub (even without water): 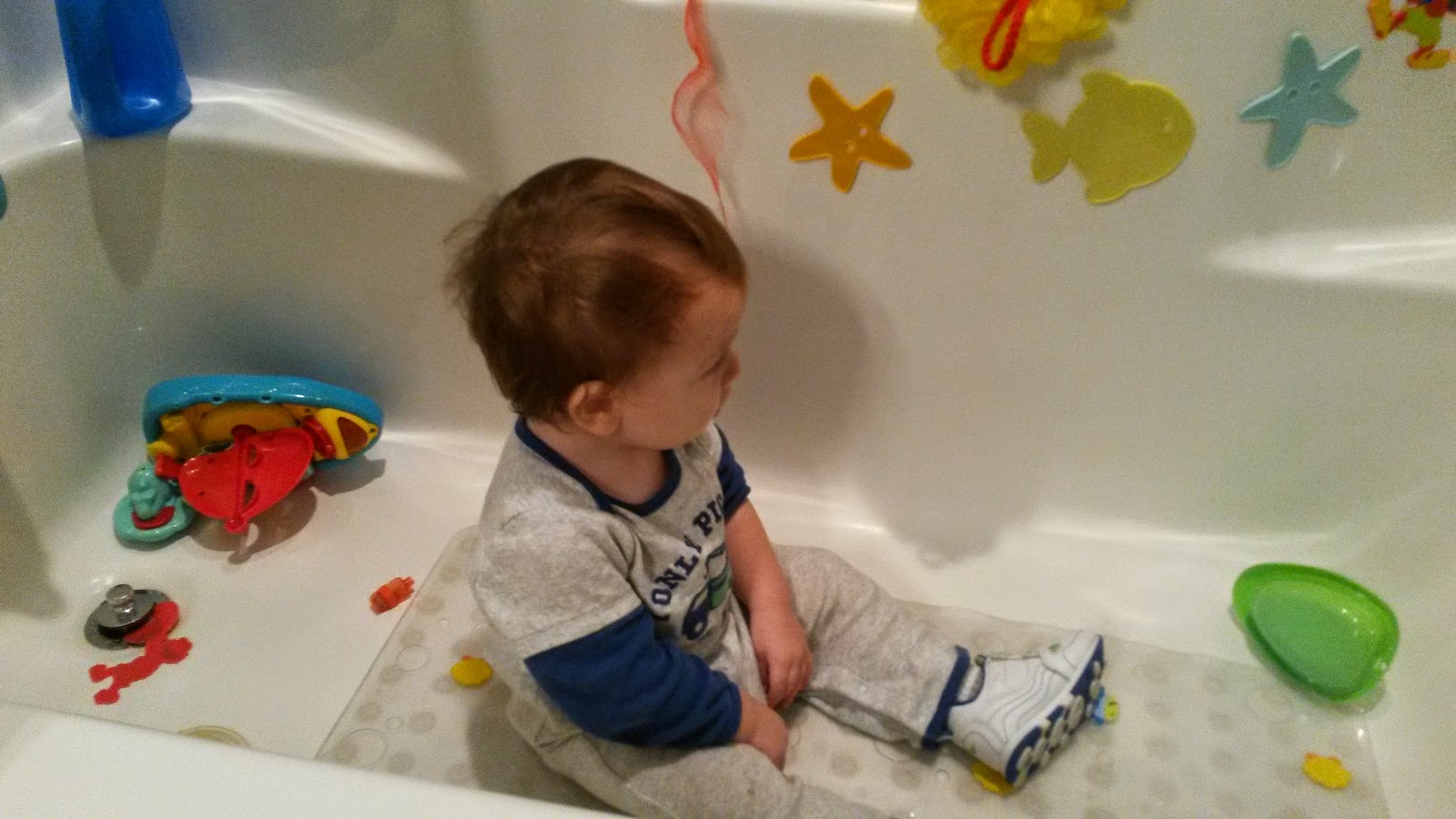 and making this face: 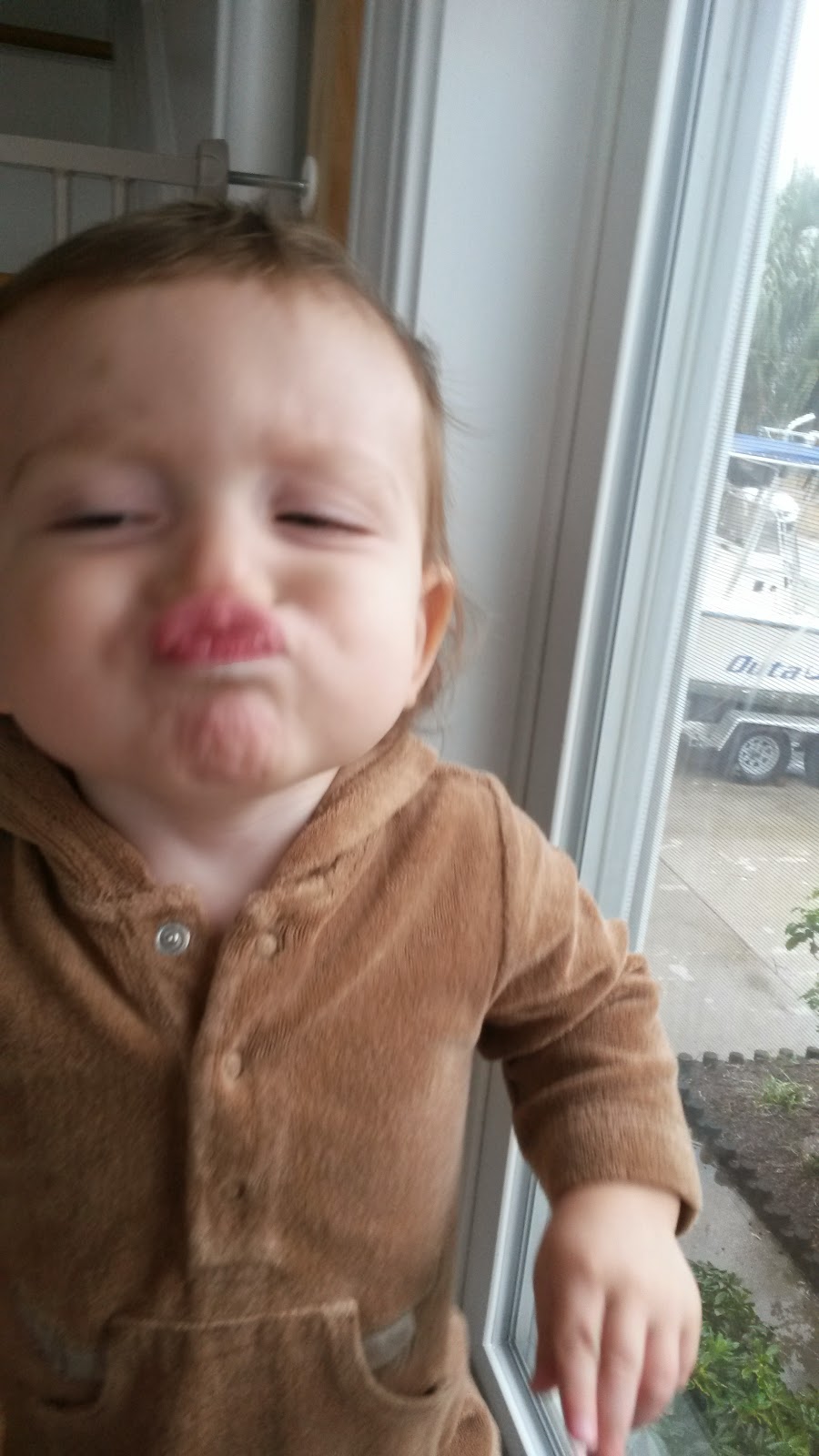 Hates: Laying on his back to get his diaper changed or to get dressed, waiting for anything, and being stopped from doing things. I have to shut the bathroom door so he can't get in there and mess with Andrew when he's going to the bathroom and he freaks out when the door is shut.

He's a funny and sweet little guy and I adore him more and more every day. He's the perfect completion of our little family.  <3