I can't believe I forgot to do Elliot's 19 month post yesterday.  Maybe it's because I can't believe that my little firecracker is already getting that much closer to being two years old.

We've been going through a rough patch lately with all of us being sick with a stomach bug, but even through that he has been my little love. 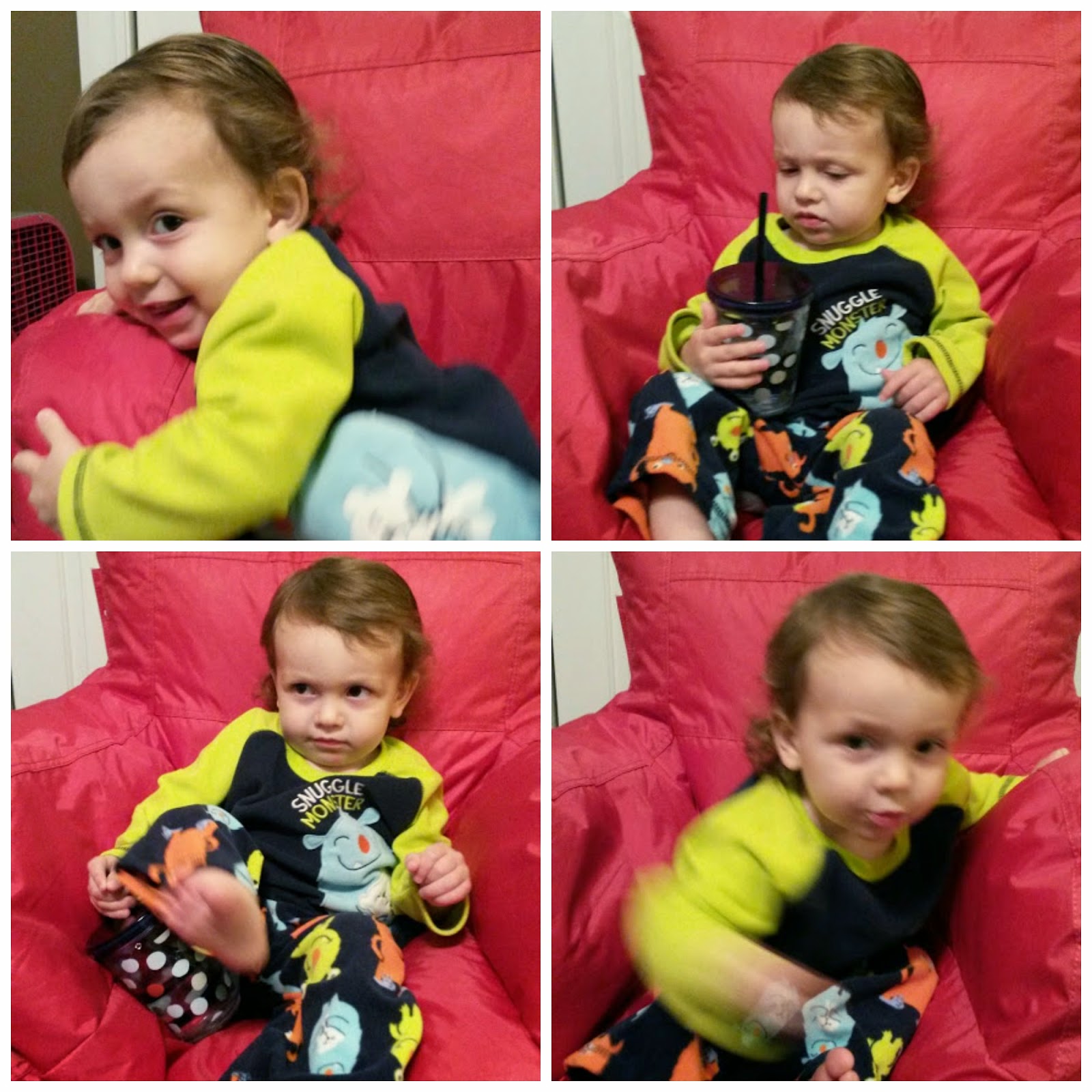 Size: He's still a little guy.  At his allergy appointment a few weeks ago he was just over 22 lbs.  With the stomach bug over the last couple weeks and him barely eating I'm afraid he probably lost some weight.  He's still too short to climb into the bathtub by himself, although he tries every night.  Luckily this also means he's too short to climb out of his crib. We still have one level that we can move the mattress down and we probably need to do that sooner rather than later.

Wearing: He's still in size three diapers and I don't see that changing anytime soon.  His pants are 12-18 months, although some of them fall right off of him.  He literally walked right out of a pair of pants recently.  I found some of the 18 month shirts and got out all of the 18 month onesies. He absolutely swims in some of them, but at least he'll get a lot of wear out of them.  He's in size 5 shoes, but that might be changing soon.  Luckily we have some size 6's from Andrew that didn't get a lot of wear.

Milestones:  He is learning his body parts and can point out his nose, mouth, ears, belly and hair. The way he points to his nose never fails to make me smile.  He's learning so much every day.  When he sees me making something to eat he runs to the base of his high chair and yells "Seat!" since I always say "Let's get you in your seat." when  I go to feed him.

Eating: He's still normally nurses first thing in the morning and right before bed. He refused a couple times over the past week and I wasn't sure if it was because he was sick or because he is starting to wean.  I have to admit that it made me really sad to think that he might be done nursing. I know he's 19 months and we've made it a long time, but he is my last baby so when he is done I am done for good.  I did a little silent cheer the other night when he nursed before bed.  He's still not eating a lot food wise and that worries me, but I'm hoping that once he's feeling better his appetite will return full force.

Sleep: I think for the most part we are officially down to one nap a day. He's been taking an early afternoon nap that's been averaging around 3 hours, which is kind of nice.  I like that we can do things in the morning without worrying about working around a morning nap.

Personality: He's a little spitfire.  When he can't do something or get to something he pitches a fit.  He's also a persistent little bugger.  If I stop him from doing something and carry him somewhere else he will go running right back to what he was trying to do previously.  Usually while laughing. 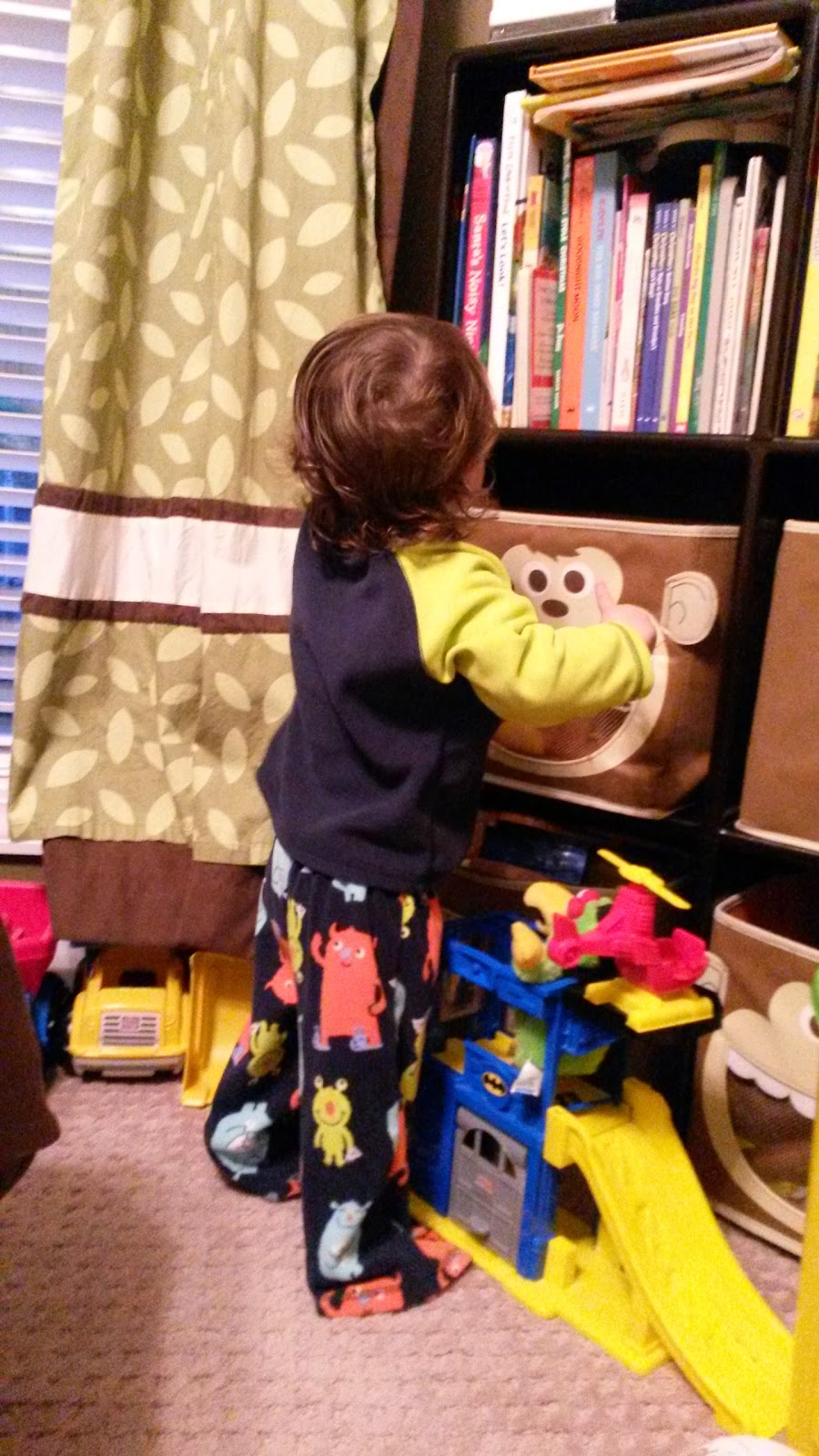 drawing on the easel: 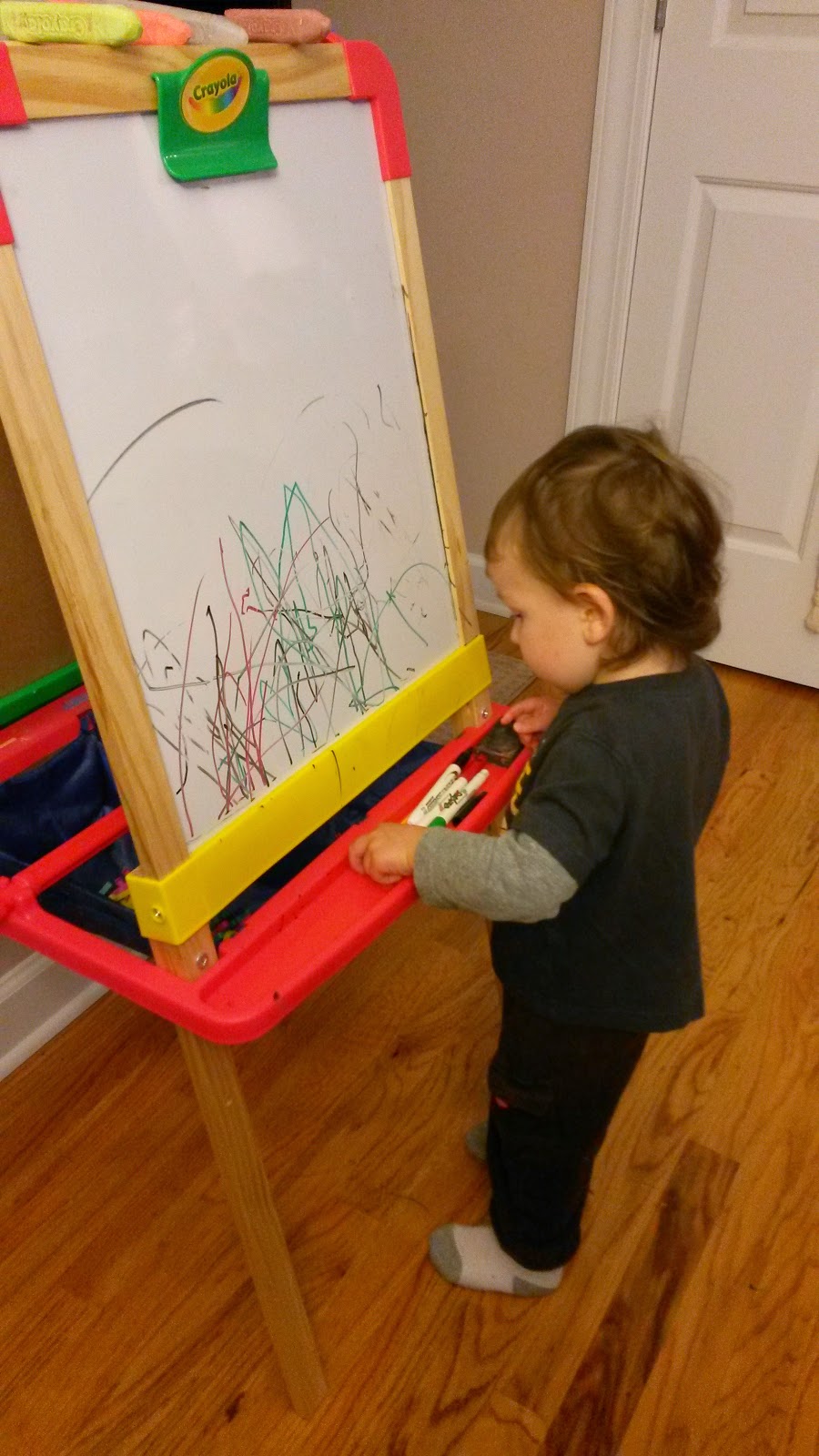 climbing on absolutely everything: 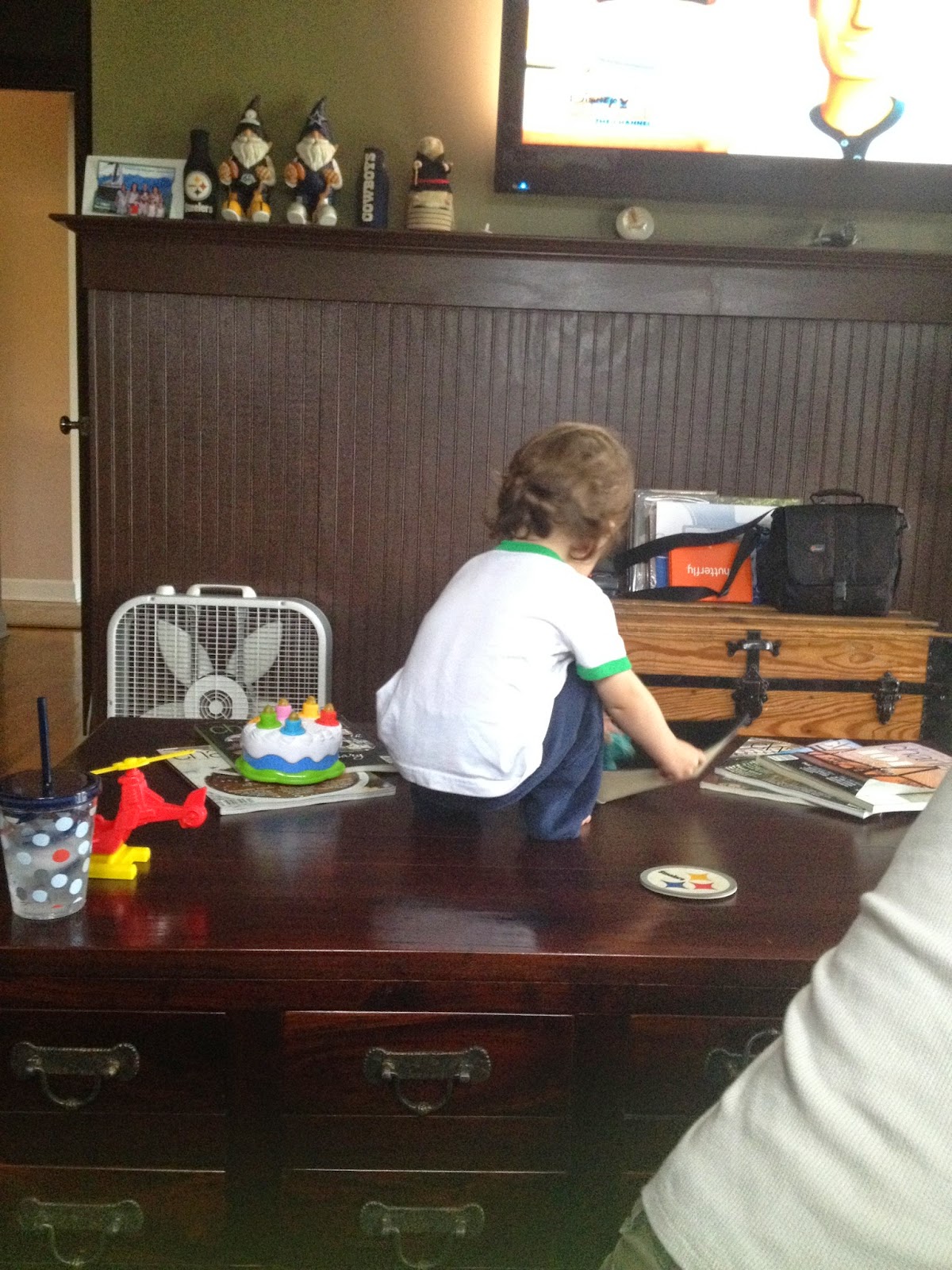 and his lovey and blanket. He pitched an epic fit yesterday when I took them from him to wash them since he'd gotten sick in his crib. He was practically inconsolable.

Hates:  Getting his diaper changed.  It's a wrestling match every damn time.  Also, cooperating at dinner time when we go out to eat.  I foresee there not being many dinners out for a while.

Every day I love this little guy more and more. Nineteen months has gone by in the blink of an eye. 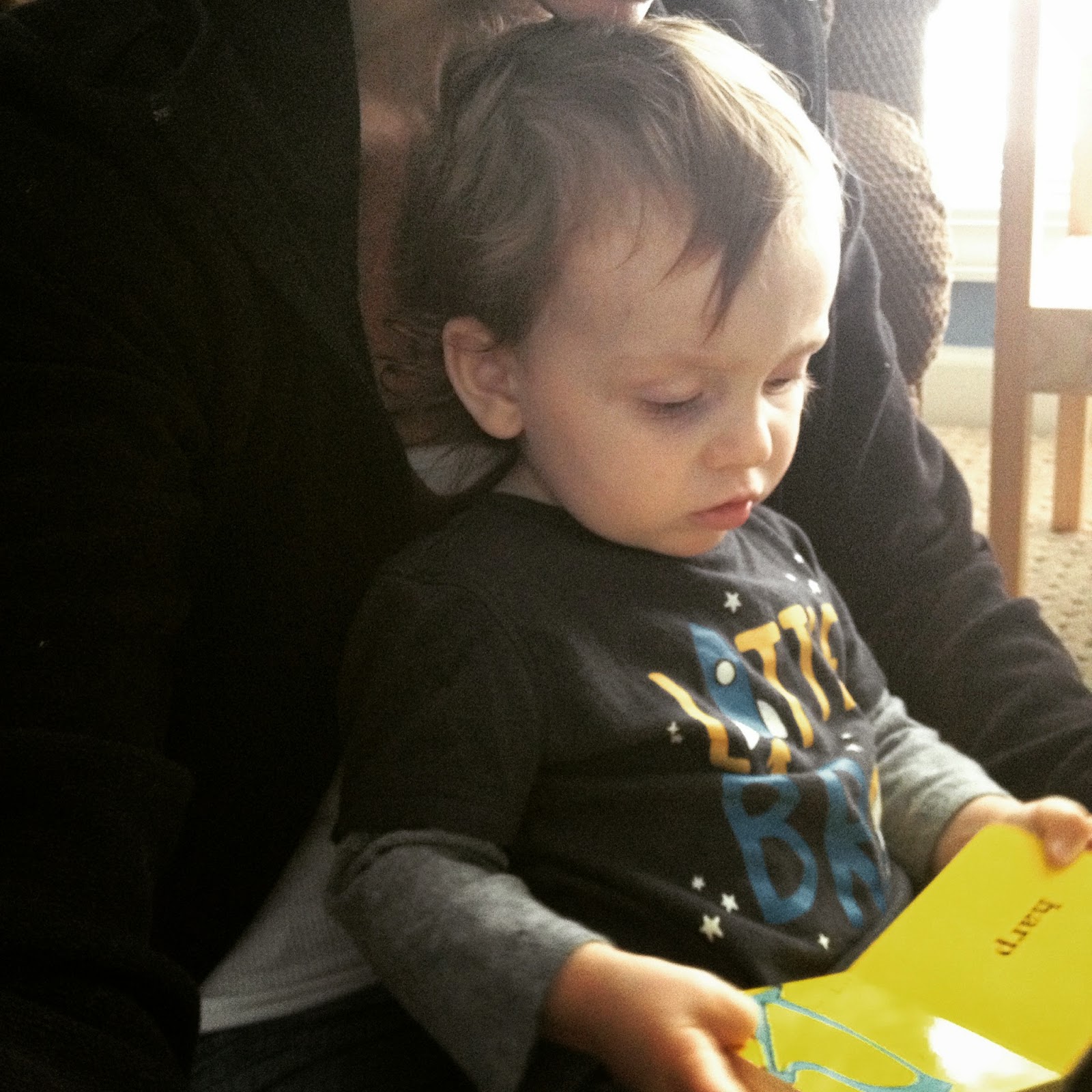