When I was 12 weeks pregnant with Elliot and we found out we were having another boy I got so excited.  I know it is possible that boy and girl siblings can be extremely close.  I have many friends with brothers who are very close and I have several friends with boys and girls and I see them being close as well. I just figured that two little boys would be the best of friends.

When we brought Elliot home my hopes were somewhat dashed by Andrew's reaction.  He didn't want to touch him and you can be damn sure that he didn't want to sit with him or hold him.  It made me a little sad and I got a little emotional when I saw how adamant he was about not being anywhere near his baby brother.

As time went on he got more comfortable with Elliot. We still had trouble getting him to sit with Elliot for pictures (our Christmas pictures were a pretty big fail) but he would always ask where Elliot was if he couldn't readily see him and he loved to pat his head. 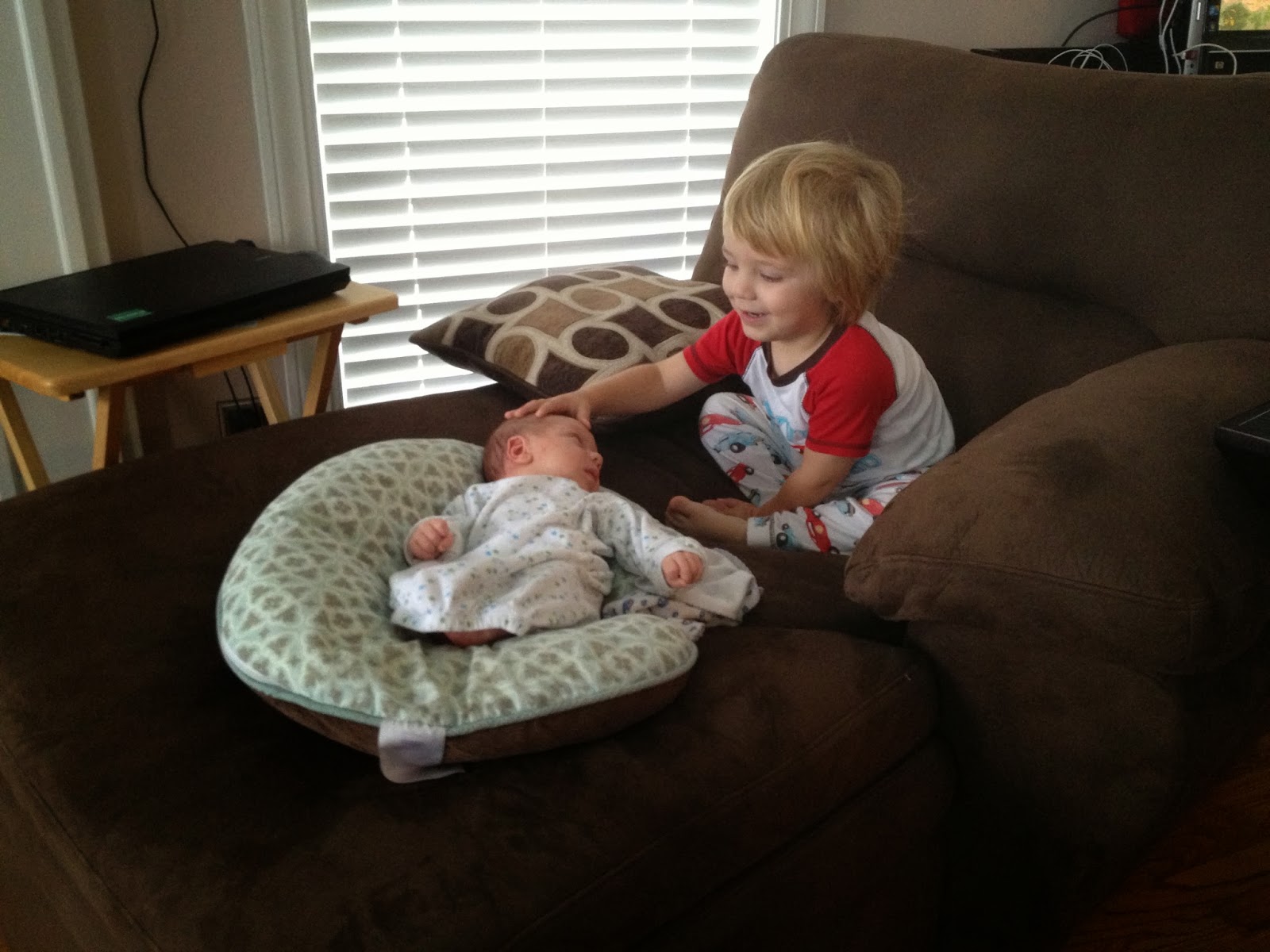 Fast forward to now and I'm starting to see the love that he has for his baby brother. When Elliot wakes up from a nap and starts fussing in the crib Andrew will exclaim "Elliot's crying!  Let's go find him!".  Then he'll go running into Elliot's room and yell "There he is!".

Yesterday I put Elliot in his crib so I could fold his laundry and put it away while still talking to him.  After a minute Andrew came into the room to find his brother.  He climbed up on the side of the crib to look at him and said "I get in there.".  So I picked him up and set him in there, telling him that he had to just sit and not jump because his baby brother was there.  For the rest of the time that I was folding laundry he sat in there giving toys to Elliot and being sweet: 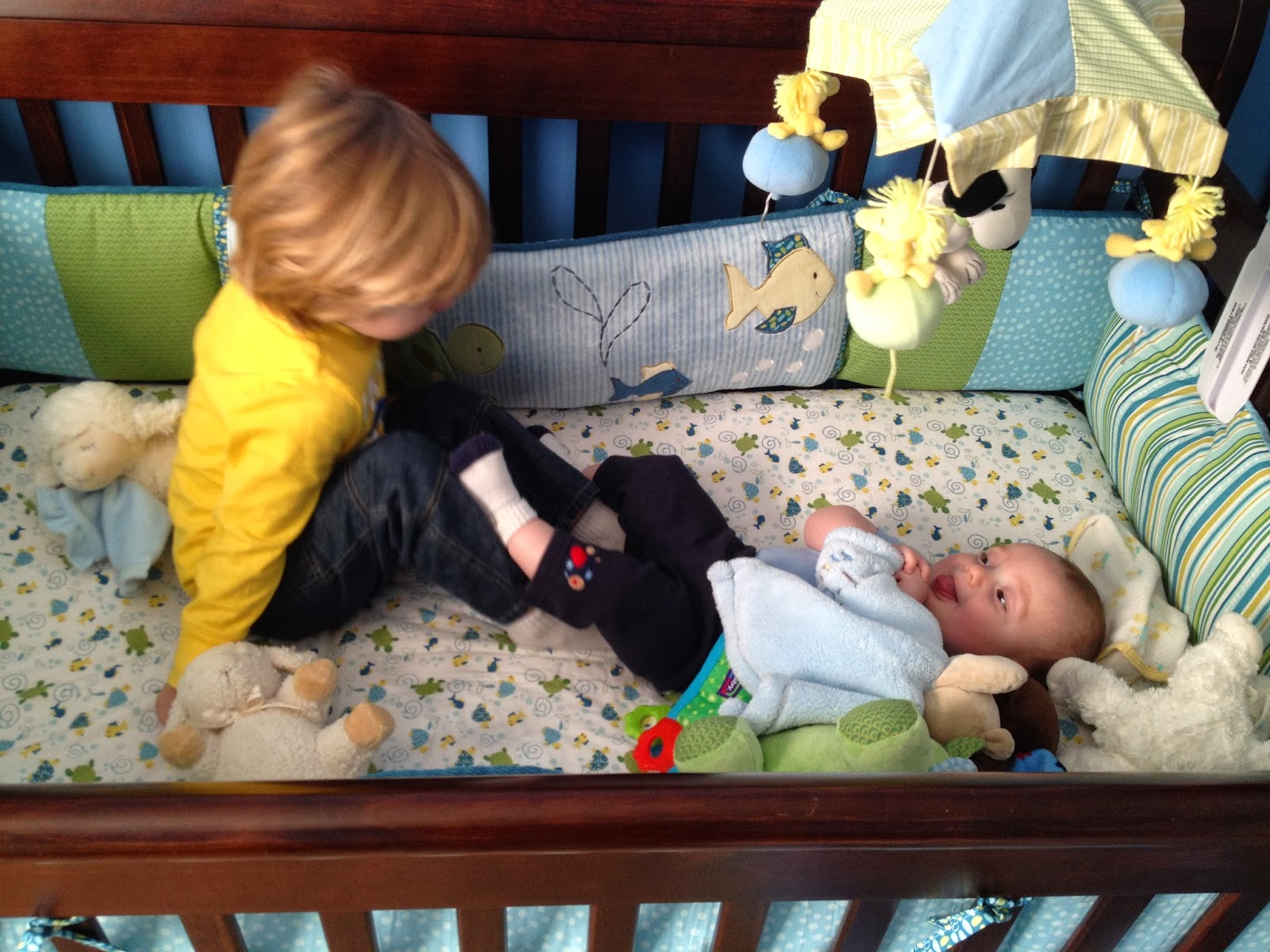 When Andrew is nearby Elliot can't take his eyes off of him. 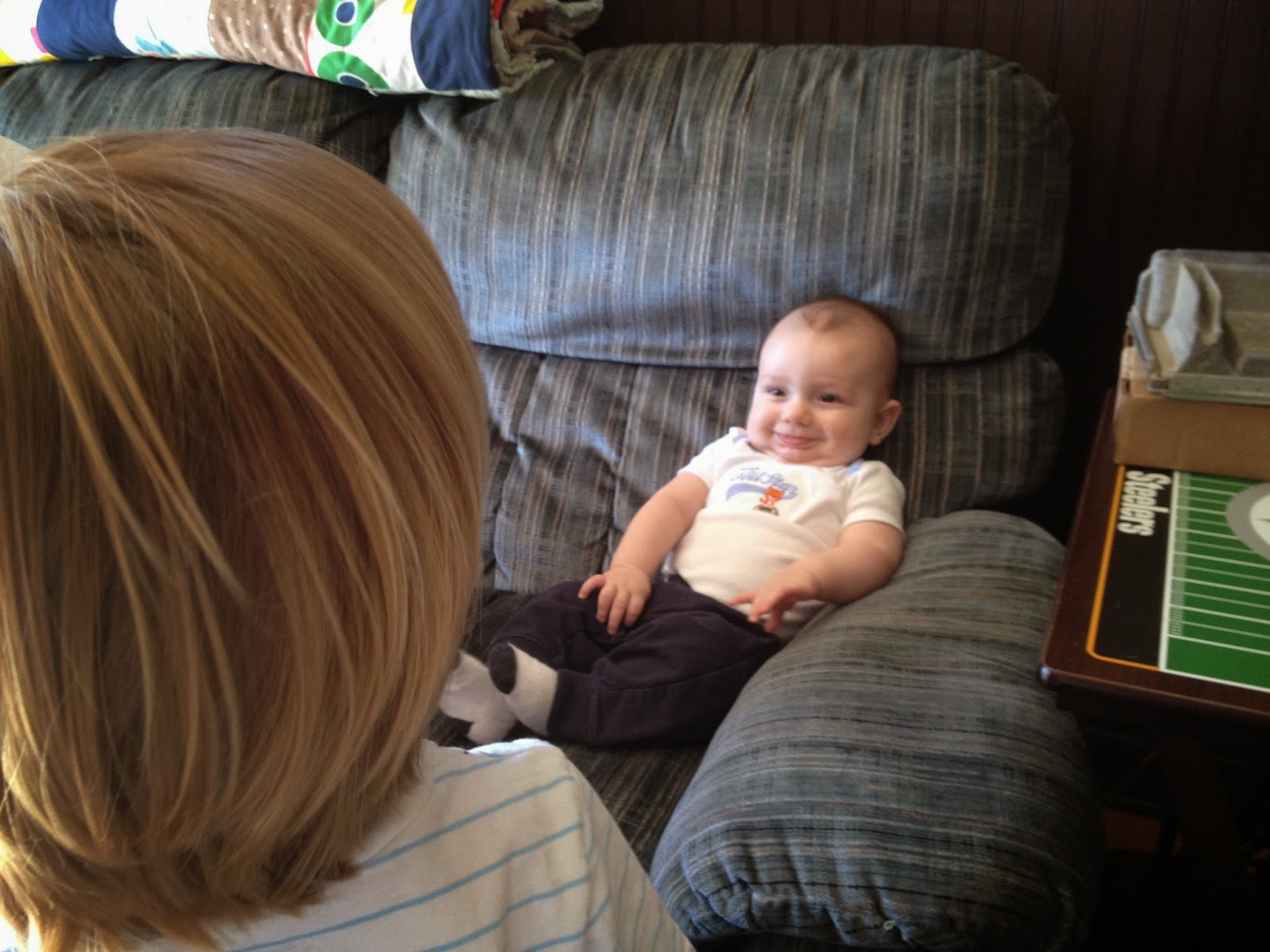 He'll stare at him and start laughing when Andrew does something silly. It warms my heart to see the big smiles and hear the little giggles that Andrew gets out of him. 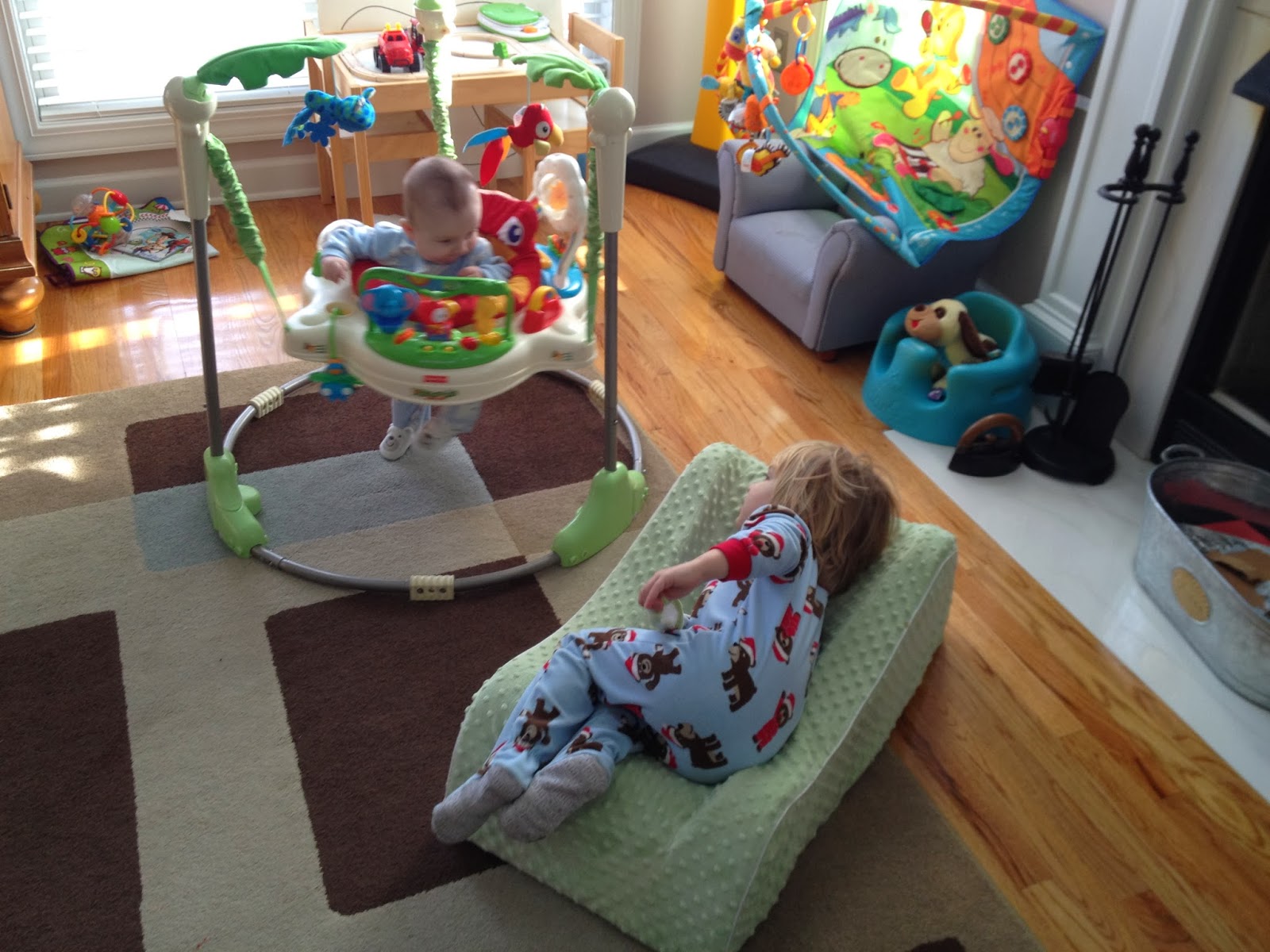 There's a part of me that can't wait for Elliot to grow up more so he can actually play with Andrew.  The other part of me doesn't want him to grow too quickly since he is my baby and I don't want it to pass by too fast.  I'm enjoying this time with my little guys.  Yesterday afternoon when I was sitting on the floor holding Elliot and Andrew walked over and gave him a big hug before crawling into my lap as well, I couldn't help but smile.  I just hope that as the years go by they remain close and always have this kind of love for each other. 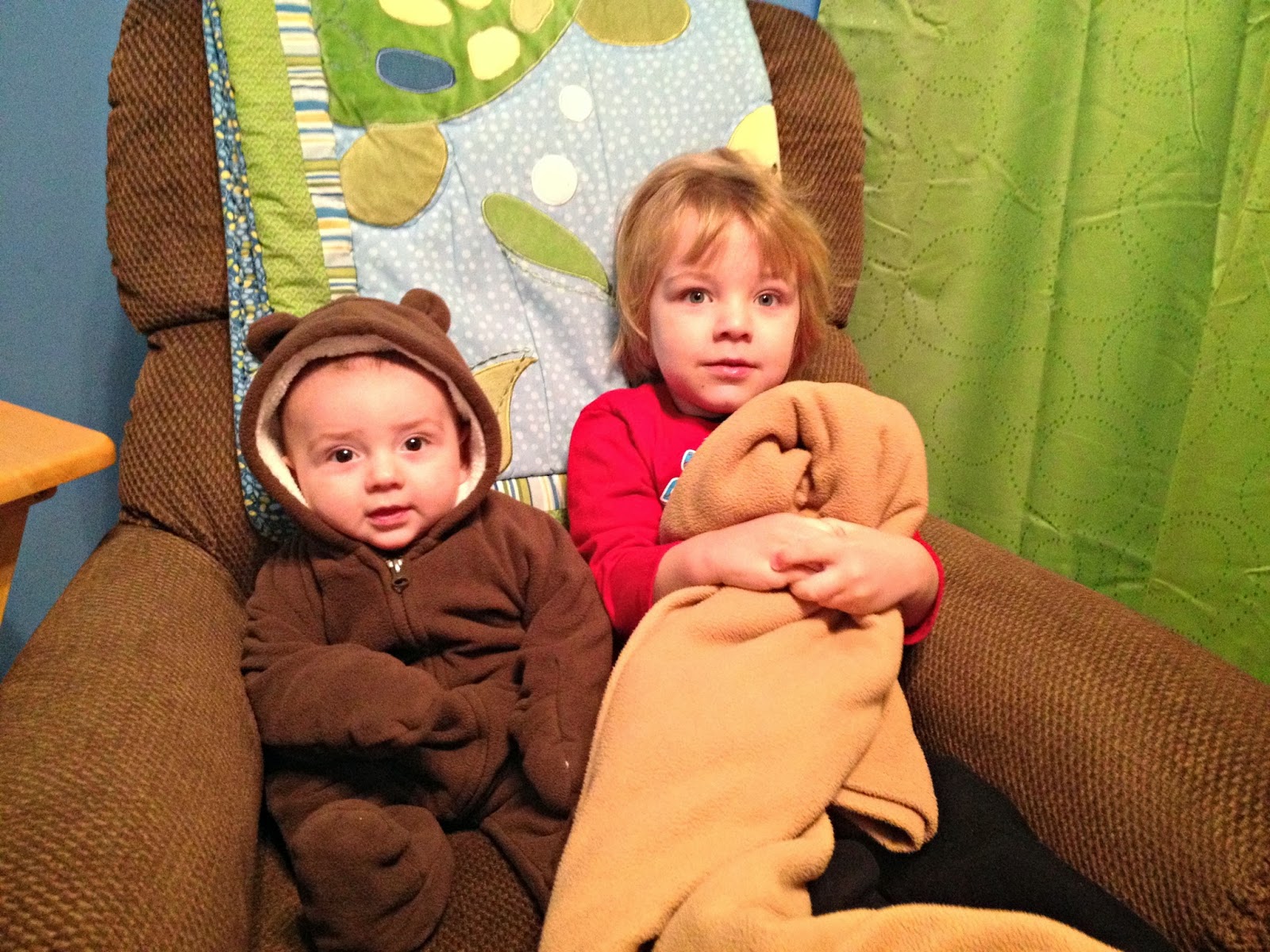