Phew!  Back from the whirlwind trip to Dallas for Super Bowl XLV.  What a weekend!

It started out Saturday with the flight from Charleston to Dallas. Thankfully  my sister booked me on a non-stop flight so I didn't have to deal with any layovers and dragging my bag through airports. Of course my flight was delayed an hour, but that gave me time to grab some lunch:

I got into Dallas around 3:00 and found my sister. She had just spotted Ron Jeremy and tried to inconspicuously snap a picture: 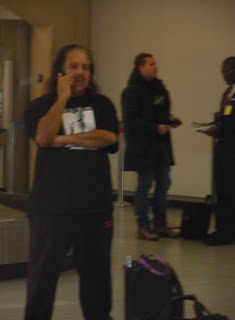 Eeeewwwww!!
Then we headed to the rental car place to get our ride before my parents and other sister landed.  We scored a Dodge Nitro and headed back to the airport to get them.  After the quick drive-by to pick them up so we wouldn't have to pay for parking, we headed for the hotel: The Hilton Garden Inn in Lewisville.  We checked in and freshened up before heading to dinner at a tex-mex place - Centro:

I think I look huge in this picture - oh well
﻿We stuffed ourselves with apps, fajitas, and desserts before heading back to the hotel for the night.  Everyone tried to get some sleep even though we were all excited about the next day.
In the morning we ate some breakfast at the hotel:

Then set out for Dallas Cowboys Stadium.  On the way we passed some fellow black and gold fans:

After a few wrong turns and some battles with the GPS we made it to the parking lot where we had a parking pass. I had bought it prior to going out there so we knew we for sure had a place to park:

Then we set out on the walk to the stadium, stopping to take some pictures along the way:

With the whole family

With Nic - the one who arranged this whole trip

Getting through security - or actually finding where to go through security - was an absolute cluster$#&%.  I give the people who organized this thing a big huge 'F'.  Nothing was clearly  marked, the security people either ignored you or didn't know the answer to anything, and it was total chaos.  Here's a tip for you, NFL, if you are trying to set an attendance record maybe, just maybe, you should hire some extra security people who know what the hell they are doing!

After lots of walking and much frustration we finally found out where we needed to go:

We were in this line for an hour or so
And we finally made it through the checkpoint and made it to the stadium:

Time to head up to the Silver level and make our way to the suite:

And desserts!  Mini moon pies, blueberry tarts, and some caramel things.
﻿
﻿After eating my fill for the time being we went and walked around a bit so I could buy a program. As we were walking around we passed Christian Slater, but I wasn't quick enough with my camera to snap a pic. Damn!  It turns out he was in the suite two down from us.
Then it was time to settle in for the festivities:

The view from our suite

Coin flip.  There was some dude that bet $3200 on it and won.  Idiot.
﻿
The first half of the game was pretty rough. A pick six by Ben and another INT that ended in 7 points for the Packers.  Luckily right before halftime my team scored to pull within 11 (21-10).  Either way we were still enjoying ourselves:

Then it was time for the halftime show. I'll admit that I didn't sit around and watch the whole thing.  We did some walking around, but we were back in the suite to catch half of it. I will say that I was not impressed.  I don't know if it was the mic issues or if their songs are just really sound edited, but they kind of sounded shitty to me.

Some people seemed to enjoy it. Then again, some people were drinking heavily...
The second half started out promising with the Steelers holding the Packers and then getting a score on their first possession of the half to pull to 21-17.  But then Mendenhall fumbled and the Packers got a score to make it an 11 point game again.  Pittsburgh scored and succeeded with the 2 pt conversion to pull within 3 and the place went nuts.  Unfortunately Green Bay then had a 5 minute drive that ended with a fieldgoal to pull ahead by 6.  There was still 2 minutes left and we had a time out. I was sure that Roethlisberger could pull off another one of his last minute drives and march down the field to score, but it didn't happen.  So my team ended up losing 31-25, but it was still an awesome game and an amazing experience.

Congrats to Green Bay - we'll get you next year  :)
﻿We then made the walk back to the car and headed back to the hotel.  Surprisingly we did not get stuck in a ton of traffic, so that was a plus.  At least Dallas got that part of it right.  We later learned that 400 fans got screwed out of seats because they were deemed unusable prior to the game.  I cannot even imagine how pissed I would have been had that happened to us.  Another fail for the NFL.
Monday morning we got up and had breakfast at the hotel then checked out and headed into Dallas. We wanted to do at least one touristy thing before we left.  We headed to the site of the JFK assassination and did the tour.

That white painted X marks the spot where the limo was when the fatal shot was fired. I kinda thought it would be marked more impressively.

View up to the Texas School Book Depository

﻿
﻿I also took some pictures of the surrounding buildings since they were kind of cool:

After we were done at the museum (no photos allowed in there) we hopped in the car and headed towards the airport with a quick stop for lunch.  We dropped off my parents and sister and then went to take back the rental car. Then Nic and I took the shuttle back to the airport and checked in giving us plenty of time to do a little shopping in the airport.  I picked up this for Baby W:

A cute little armadillo to commemorate his first trip to Texas (albeit in utero)
﻿
We hung out until it was time to catch our separate flights and then parted ways.  My flight was a nice quick 2 hours back to Charleston, but the last 20 minutes were so turbulent that I thought I was going to cry. I'm a nervous flyer to begin with and I was by myself so I didn't have anyone to calm me.  By the time we landed I was feeling sick and covered in a cold sweat.  I don't think I'll be flying for a while.
J picked us up at the airport and ended our whirlwind Dallas adventure. Even though our team lost we still had a great time and it was an amazing trip that I will never forget.  Thanks Nic!!
Posted by kjw at 10:35 AM