No, I'm not talking about the fun drinking game 'I Never'.  I'm talking about the things I never thought I would do as a parent prior to actually becoming one.  There weren't many things that I actually said/thought I would never do - I've never been one of those people who makes bold statements like that.  There are a few things that I did say out loud (or think to myself), though.

I'll never become one of those women who constantly talks about her kid.
Yeah, I'd like to apologize to my friends and family for not sticking to this one. I can't help it - he's just so damn cute and funny that I can't help but talk about him.  I go back and look at my facebook and see that everything seems to be about him, so I try to throw in some non-kid stuff to give it some variety. Inevitably, though, it always comes back to my favorite topic - the munchkin. 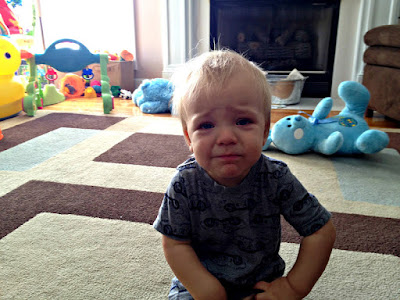 What do you mean you don't want to talk about me?


I'll quit breastfeeding once he gets teeth and definitely won't go past a year.
I will admit that when that first tooth popped through and he gave my nips some nips I was almost tempted to throw in the towel. I did not want to become a chew toy.  But we powered through and he learned not to bite and six months later we are still at it - albeit really only one time a day in the morning - but we're still at it nonetheless. He'll be 14 months old next weekend and though I don't see us stopping just yet.  I know the end is near, but it isn't imminent (unless my body completely quits producing any milk whatsoever, which might happen soon).

I'll never let our house become overrun with toys.
Ummm... yeah. I think that one was just delusional.  Not that our house looks like Toys R Us exploded or anything (at least on some days), but it's everywhere.  I will say that every night we gather everything up and return it to some semblance of order, but for an OCD clean freak like J I just know that it is driving him crazy.  Sorry hon - I think it's only gonna get worse. 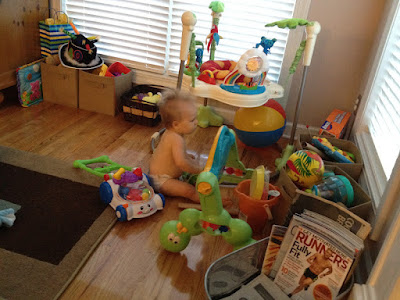 
I'll never co-sleep/bedshare.
This is one that I have stuck to.  Yes, when I was on maternity leave there were a handful of times that I brought him into the bed with me in the morning after J had gone to work and we would snuggle, but I never actually slept with him in the bed.  Mostly because I can't sleep with a noisy squirmy little person next to me. It's also because I was terrified of the possibility of something bad happening.  My sister is a pediatrician and  I have heard too many horror stories from her to ever feel comfortable doing it.  Yes, I know there are safe ways to co-sleep, but even though he is a great sleeper he is not quiet and if he was right next to our bed I would have never have gotten any sleep. 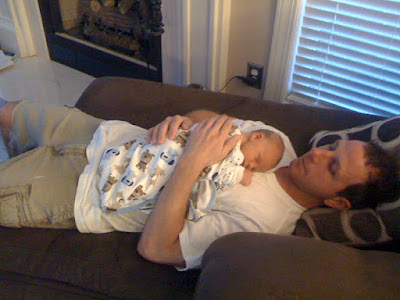 This is as close as we ever got to co-sleeping.

So there you have it. Me eating my words.

What about you?  Are there any "I'll never" statements that you made in the past that didn't quite stick?  Head on over to Growing Up Geeky and link up to Toddle Along Tuesday.