I Think We Need a Backup

Last year I bought Andrew a stuffed duck toy from Kohls when I was out shopping.  I figured what the heck - it's only $5 and it's really cute.  He liked it ok at first since it's brightly colored and nice and soft (this kid loooooooves soft stuff), but he didn't seem overly attached.

Yeah, that has all changed in recent days.

When we walk in the house as soon as he sees him he smiles and begins chanting "Dut, dut, dut..." until he gets his little hands on him.  He sleeps with Dut  (I decided that is his name for now) and there have been many mornings when we walk in to get him when the munchkin sits up in his crib and holds Dut in the air.  If Dut gets left behind in the crib while Andrew is getting his diaper changed as soon as he's on the ground he walks over to the crib and reaches through the bars to get him.  Dut is too puffy to fit through the bars so I have to pick him up and hand him over.  Andrew toddles around the house holding Dut and happily chants "dut dut dut".  It's one of the cutest/funniest things I've ever seen. 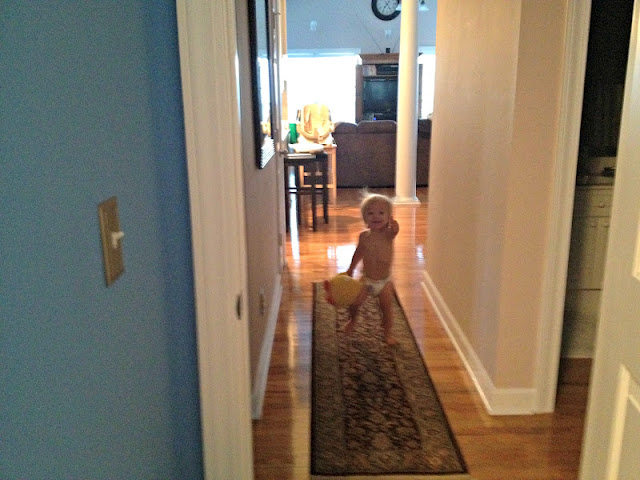 Some days Dut goes with us in the car on the way to daycare.  Half the time he also gets carried into daycare since I can't pry him out of Andrew's fingers. Then I have to distract him long enough to get a hold of Dut so he can go with me for the day.  I'll tell Andrew that Dut has to come with mommy so I'm not lonely during the day. 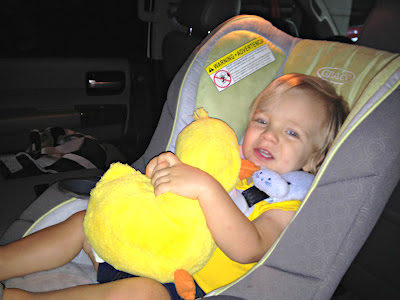 I'm glad he loves Dut and the look of joy on his face when he spots him is enough to melt my heart.  There's only one problem.  He also likes Dut to hang out when he's eating so he can snuggle him which leads to Dut getting kinda grimy.  Last night's guacamole left Dut a little worse for the wear. I scrubbed him down and was able to get him presentable, but he was not able to be a bedtime companion. Andrew didn't freak out about not getting to sleep with him, so that was good, but as soon as he saw him this morning he yelled for him.

He insisted on having a breakfast buddy, so now Dut is also nicely smeared with peanut butter. 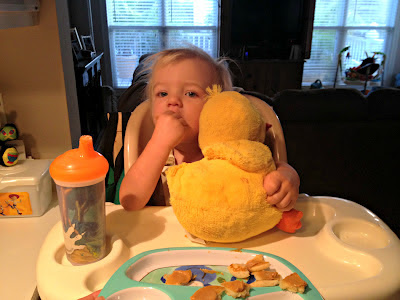 I'm fairly certain he is washable since he is just a stuffed toy so he will be getting his own bath tonight. This makes me think that I need to go back to Kohls and pray that they still have him in stock so I can get a backup (or two) since something tells me that very soon Andrew WILL freak out about not getting to sleep with him.  I'm hoping maybe we can keep one somewhat clean for bedtime. Or at least have one that's clean and ready for snuggles while the other one gets a much needed bath. I only hope he doesn't notice the difference.

Anyone else's kid have a favorite fluffy companion?  Do you have a spare laying around?  If so, does it work or does your little one know the difference??