Last night we decided to take the munchkin to the pumpkin patch to pick some out and try to get some pictures.  Of course we didn't get the hours before we went and arrived at 5:47 with a 6:00 closing time.  Oops! 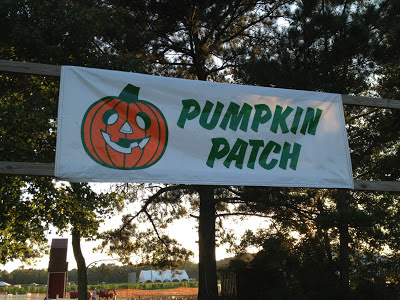 We decided to make it quick and snap some pictures while picking out pumpkins.  Trying to get pictures of Andrew this year proved a lot more difficult than last year when all he could do was sit there (although he was pretty damn cute last year!).  The better pictures on on my camera and haven't been downloaded yet, but here are a couple from my phone: Looking less than thrilled on the tractor 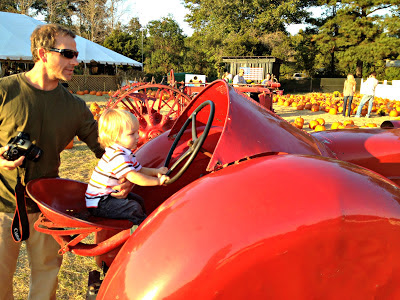 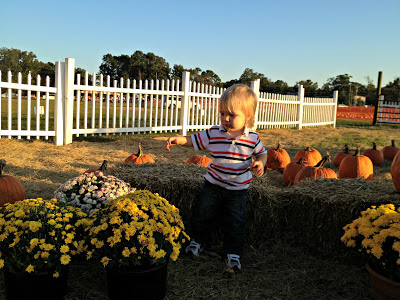 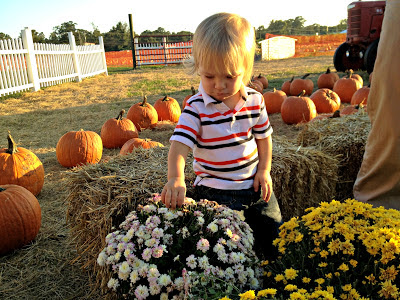 He was more interested in playing with the flowers than posing for pictures.  We eventually had to remove the flowers - I was afraid he was going to destroy them!

After we got booted from the pumpkin patch at 6:15 we headed to Cracker Barrel for dinner (we had a gift card). It had been forever since I'd been to a Cracker Barrel, but a new one opened up outside of town and we knew it would be quick and easy.

Andrew went to work with the crayons with a little help from daddy: 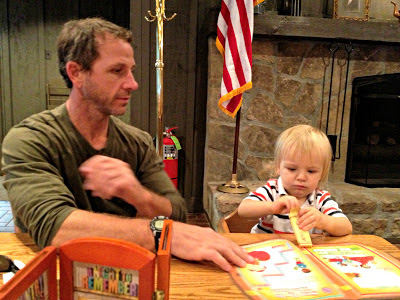 We ordered him some chicken fingers with a side of mac n' cheese. Turns out we should have just gotten him the mac n' cheese dinner - he LOVED that stuff! 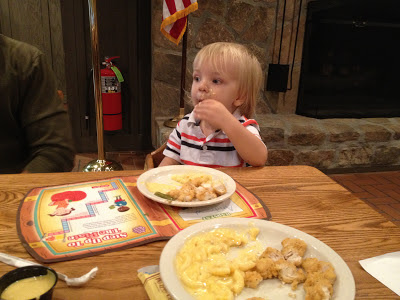 After dinner while J was paying we browsed around the country store part.  Andrew was SO excited - there is so much stuff to look at and play with. He was particularly enthralled with these little Hello Kitty stuffed animals and was trying his hardest to pick up all three of them but kept dropping one. 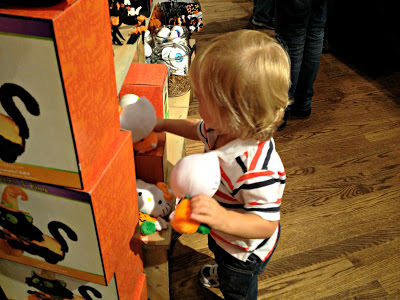 When he was done playing with them I was happy to see him try to set the three of them back up on the shelf. Such a good boy  :)

Then he ran off and found a baby doll in a stroller and was all excited to push it all through the store. 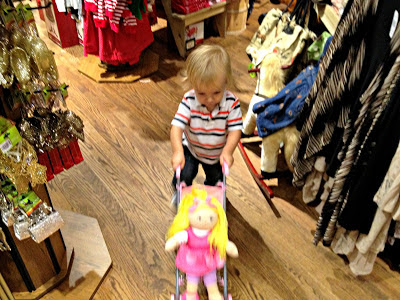 I thought it was cute and don't mind at all that my little boy was playing with baby dolls.  It's good practice for when he has a little brother or sister, right?

We got home and I found the pumpkin hat from last year and tried to get a picture of him in it. My crazy little toddler does NOT sit still, so this was the best I could do: 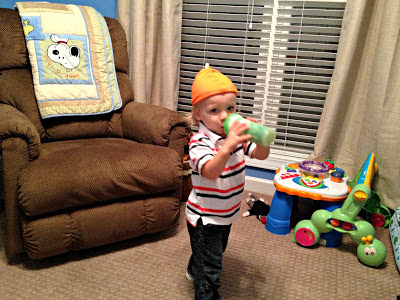 All in all it was a pretty successful trip to the pumpkin patch.  Maybe this weekend when it's just me and the munchkin I'll try to get some better pictures of him with the pumpkins we bought. And the hat  :)