Where is my baby?

That is the question I have been asking myself more and more lately.  When I look at Andrew I see less and less of a baby and more and more of a little kid.  It probably doesn't help that I went through his drawers and closet again and weeded out all of the too small clothes (leaving a definite shortage of clothing so yay, shopping!).  I look at some of the clothes and it seems impossible that he fit in them not too long ago.

We also (finally) took down the jumperoo this past weekend.  He hadn't been in it in a little while, but he had a bit of a meltdown when I was dismantling it and kept trying to climb into the seat.  I had to keep telling him that he's not a baby anymore, even though it kind of choked me up to say it because then it was really sinking in. He's NOT a baby anymore  :(

I think it's hitting me even harder because there have been a rash of pregnancy announcements from friends and former co-worker and several that are ready to pop any second.  Seeing squishy new babies is just reminding me even more that the munchkin is speeding away from babyhood at an alarming rate.

It isn't all bad, though.  With him growing up he is developing quite the personality and I seriously crack up every day because of him.  Like when we were walking across the parking lot of Outback on Saturday night: 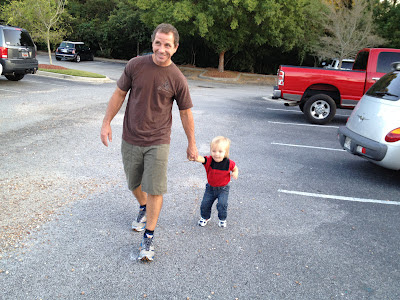 He does this little dancing/bouncing thing when he walks and gets this excited look on his face.  Oh, and he walked clear from the car all the way to the restaurant (we were parked all the way in the back). He loves to walk/run. 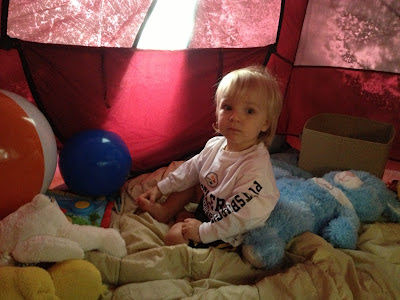 He also spent all weekend playing in the tent that is currently set up in our living room. J is going camping this weekend and set it up to make sure it still works since it's been in the garage for the better part of a decade. So currently daddy's tent = playhouse and he loves it.

And finally, he enjoys walking around outside, but keeps consistently taking off his right shoe. I keep checking it to make sure he doesn't have a rock in it or anything (he almost never does), but he'll walk a little bit, sit down and whine, then rip off the shoe and go about his business.  Like doing yoga in the driveway. 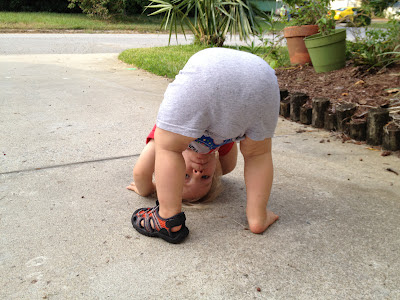 Yep, my little guy is full of personality.  But he isn't a baby anymore and that makes me more sad than I thought it would.  But I guess even when he is a full grown adult he will always be my baby...