This past weekend I was on my own with the munchkin.  J left Friday morning to go camping with some friends up at Table Rock so it was just me and the little man.  I knew it wouldn't be too bad because let's face it, he is an awesome kid  ;)

Friday evening I picked him up and we had some playtime outside. He is happy as a clam when he's outside and he kept walking over to the pumpkins and yelling "Ball!". I keep correcting him, but so far he isn't getting the whole "pumpkin" thing. 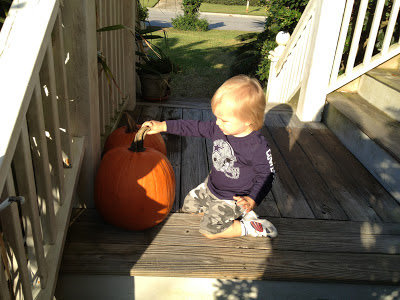 We had some dinner, some fun in the tub, and then a little more playtime before bed.   He was such a happy giggly kid that I almost hated to put him down for the night. 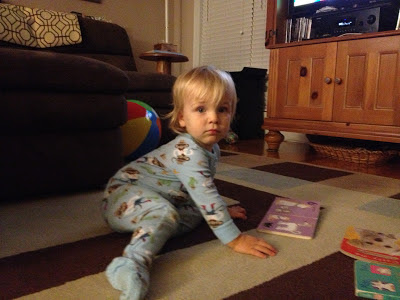 J called to say goodnight, but Andrew doesn't quite grasp the concept of the phone. He kept looking at it all confused since daddy's voice was coming out of it, but he didn't understand what that meant.

So I put him down for the night and decided to kick back and relax with a little wine since I had the night to myself.  Unfortunately the "little" wine was a little too much and I woke up Saturday feeling like shit (I never drink wine).  With a toddler to take care of all by myself for the day. Oh boy.

All I can say is thank god he is such a good kid.  He was ok with hanging out around the house instead of going out and running around everywhere. It was super windy outside, so I didn't think the bike ride I had planned would go over too well anyway. Instead we hung out out around the house, watched some football, and played one of his favorite games - climb on mommy: 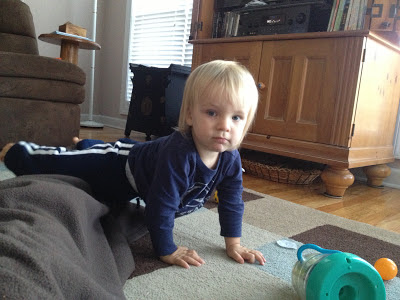 At one point Andrew disappeared into the guest room and I heard him say "Doggy!".  I was confused until I saw that he was holding a picture frame that holds a couple pictures, one of which is of our dogs.  I sat on the bed while he looked at the pictures and smiled when he said "Daddy!" and pointed at J. I could tell he missed him.

Yesterday to make up for me being a slacker on Saturday we took a walk over to the park. He LOVES the park.  Particularly the rocking thing. He used to hate it, but yesterday he kept running over to it and trying to climb up on it.  I had to help him up, but he had a blast when he was up on it.  He would climb down by himself and run around some more, but then end up right back over at the rocker.


We spent 90 minutes at the park before I made him leave. We got home and he had a snack before we had more playtime outside. It was a beautiful day - sunshine, a nice breeze and a perfect temperature.  I love fall days like yesterday and can only hope that there will be more of them to come.  We had a little lunch and I got him down for his nap at 1:00, just in time for me to do some laundry and watch some football.  J called to let me know he'd been home around 7:30 - sans the skin on the back of his heels (hiking boots weren't quite broken in enough before his hike).  Once Andrew got up we hung out outside before making a Target run and picking up some dinner.  J got home while Andrew was in the tub - his face lit up as soon as he saw his daddy and it was enough to melt my heart.

So we made it through the weekend  - even with my little wine hangover (lesson learned).  I had so much fun having my little man all to myself, but I'll say it's nice to have everyone back together again.