This past weekend I took part in the 14th annual bocce bash to benefit Special Olympics.  This is the third time that I have participated (I did the 10th and 12th ones as well).  My company is one of the sponsors so we were supposed to be there early to help set up. I didn't get there at 7:45, but I made it by 8:00 after feeding Elliot and pumping.

We set up the 32 courts, put up our tent, got our free chicken biscuits and mimosas and waited for the tournament to start. 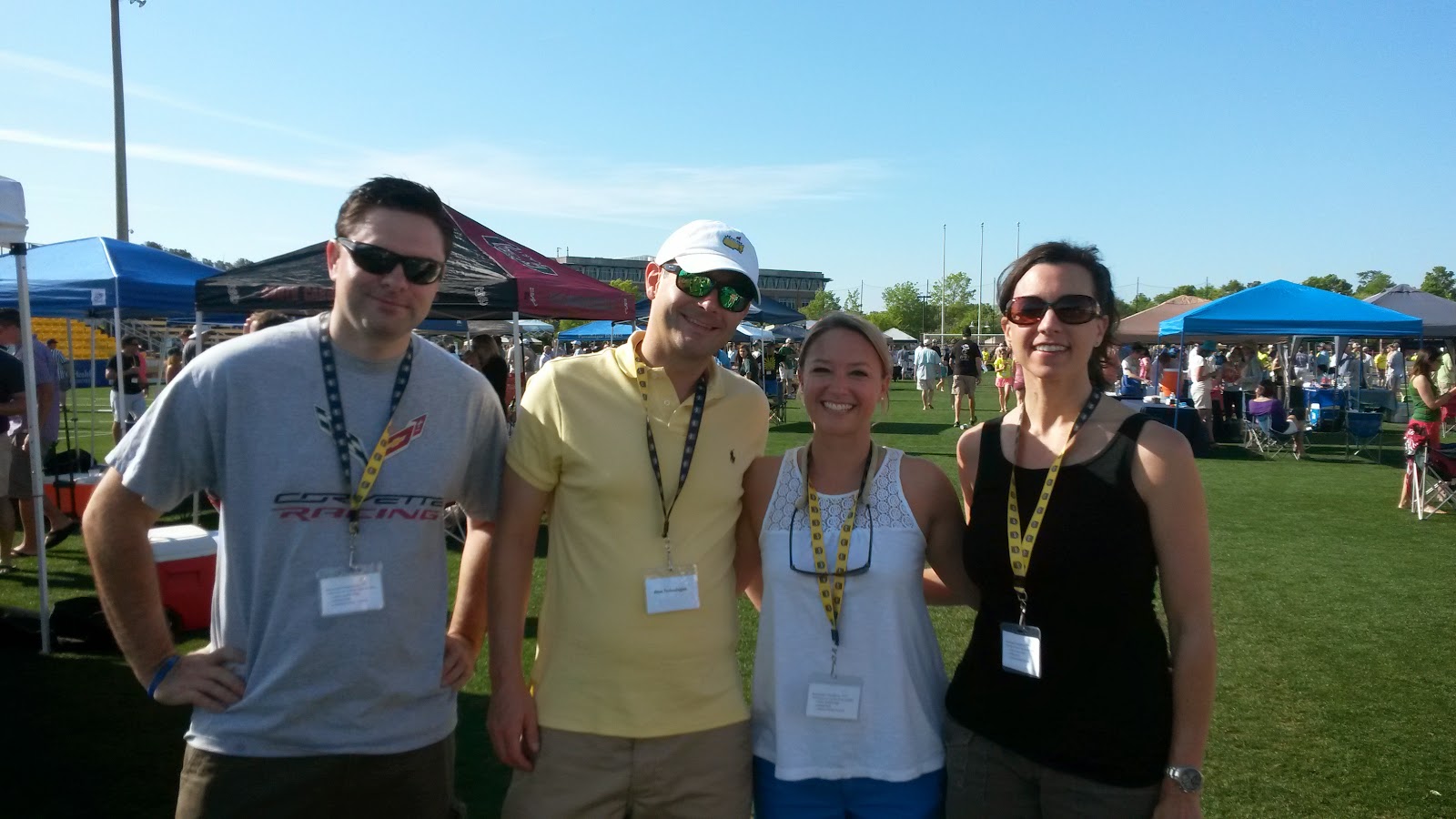 Our team: Clayton, Sean, Karen and me

We threw some practice balls and scoped out the competition: 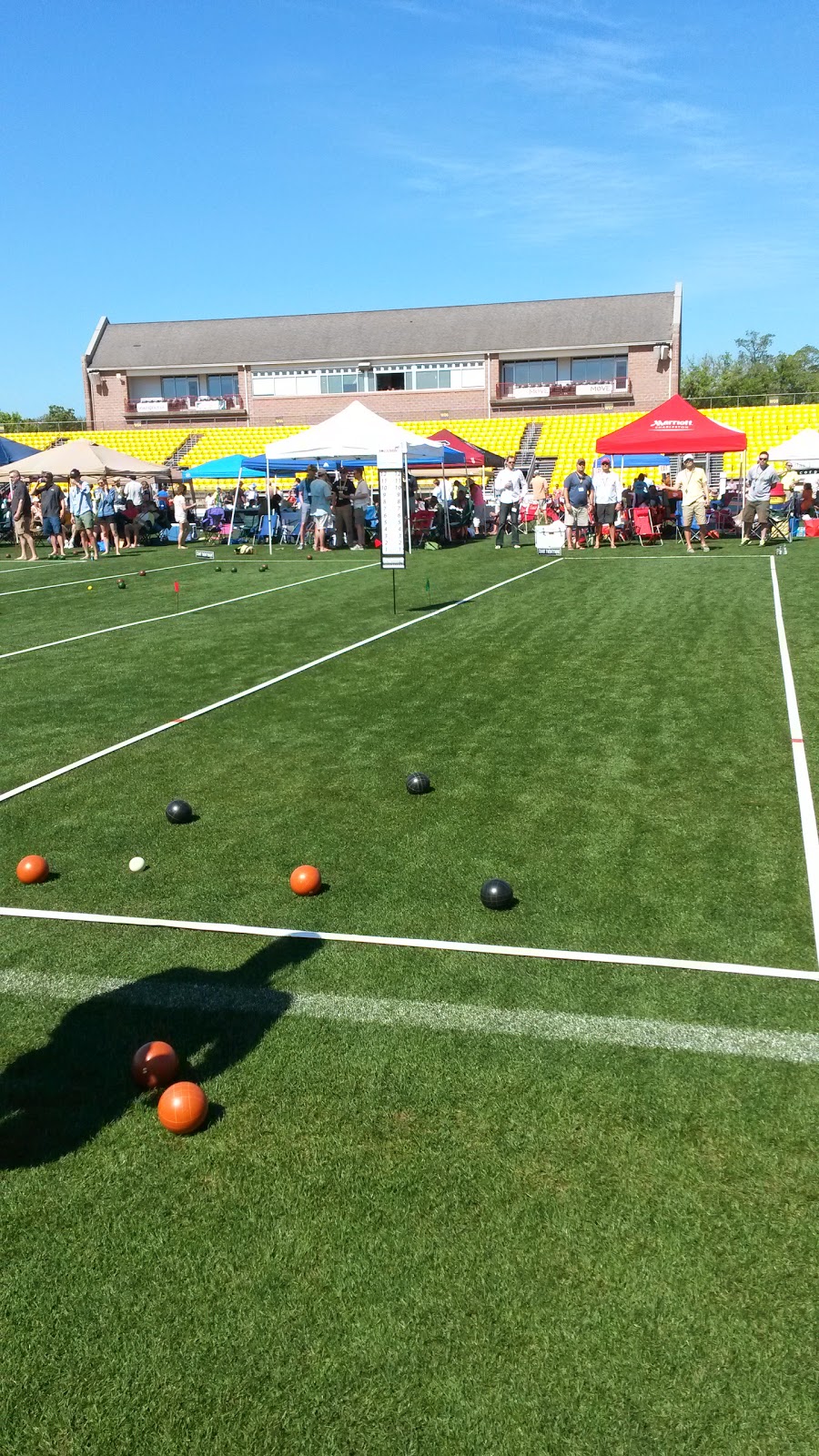 Finally at 10:00 it was time to get started. My team was not in the first game (there were four teams per court and you played each team once).  We hung out waiting for our turn. They were taking forever so I ran to the car real fast and pumped some since it was already 10:30 and that's when I pump at work.  I had brought my little cooler and ice pack so I was able to keep it cool.  Eventually it was our turn so we grabbed some beers and started playing.   Our first game was close, but we ended up losing 12-7.  We had another game off so we checked out how some of our other teams were doing and grabbed some more beer.  J sent me a text to see how we were doing. I told him we had only played one match so far and still had two to go. I was thrilled when he said he was going to pack up the boys and head out to meet me (I was really hoping he would even though I knew he wasn't looking forward to wrangling both boys by himself).

By the time they got there we were playing our second match so I couldn't meet him in the parking lot. I kept an eye out and when I saw him walking towards our court with the boys I went to help out.  I set them up at our end of the court and played with them when it wasn't our turn: 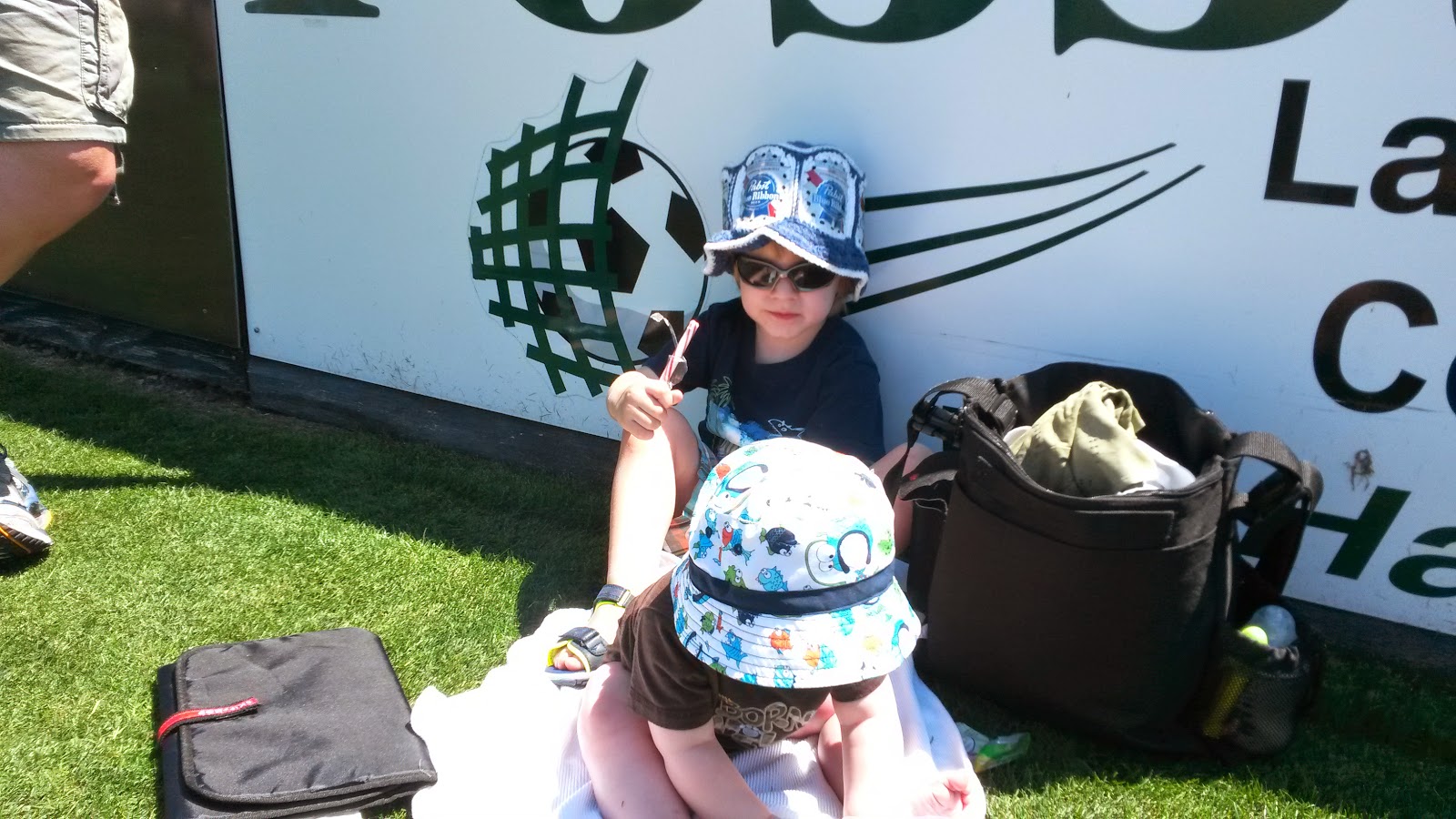 We won the second match 12-9 and then had to play our last one.  The top two teams of each group would move on to the next round.  We would have to win and have a better point total than the other teams for any hope at moving on.

Karen and I were ready: 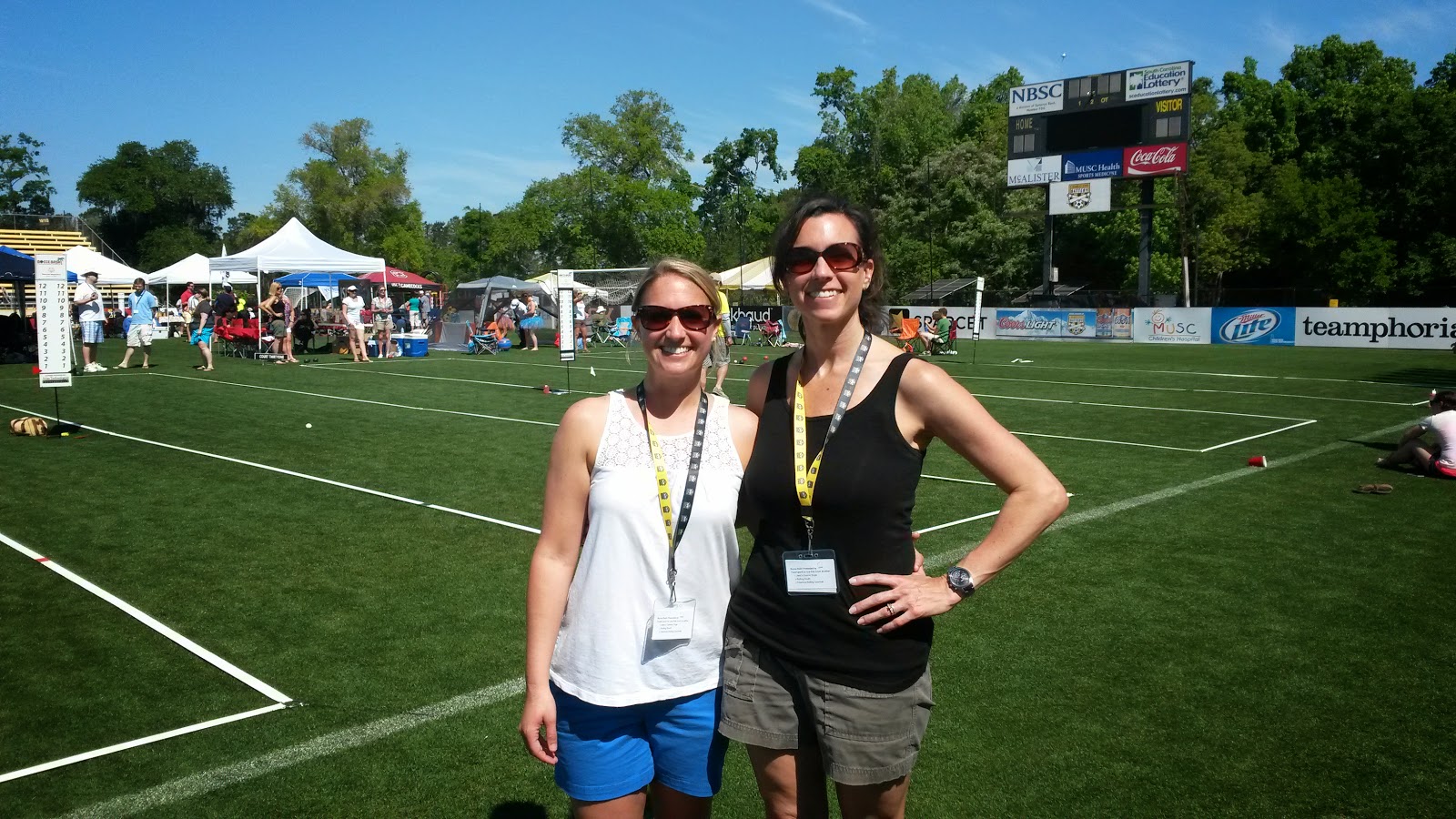 Unfortunately the other team got lucky with a 3 pt round and we ended up losing 12-8, which meant we were out.  By then it was lunch time we I plopped Elliot in the K'tan and headed over to the food trucks.  I was able to get some extra food tickets so we could all have lunch. Andrew surprised me by eating an entire hotdog with the bun. Then because he was being so good we headed over and got a snow cone: 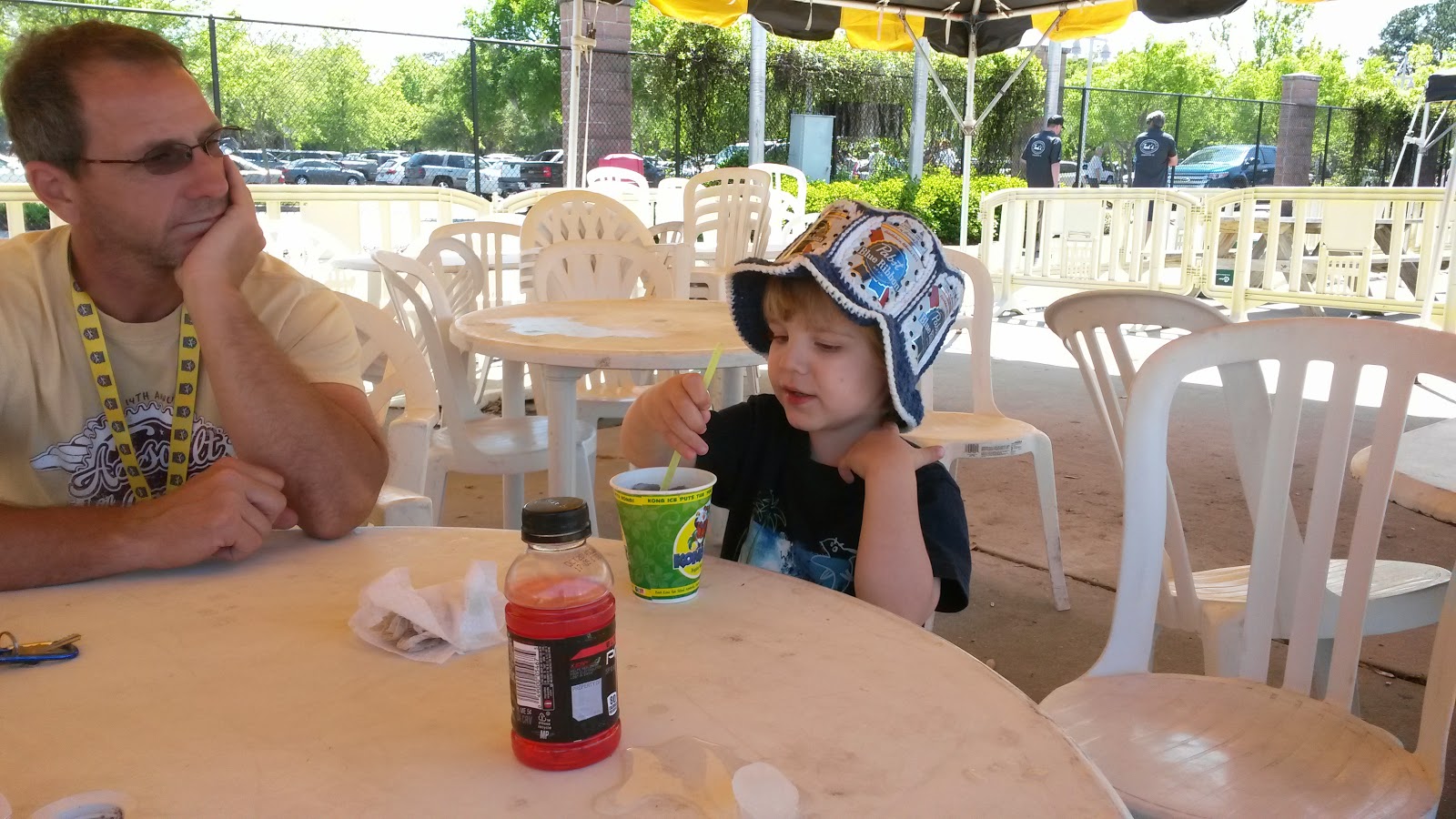 While he was enjoying his treat I went over to a quiet corner and fed Elliot: 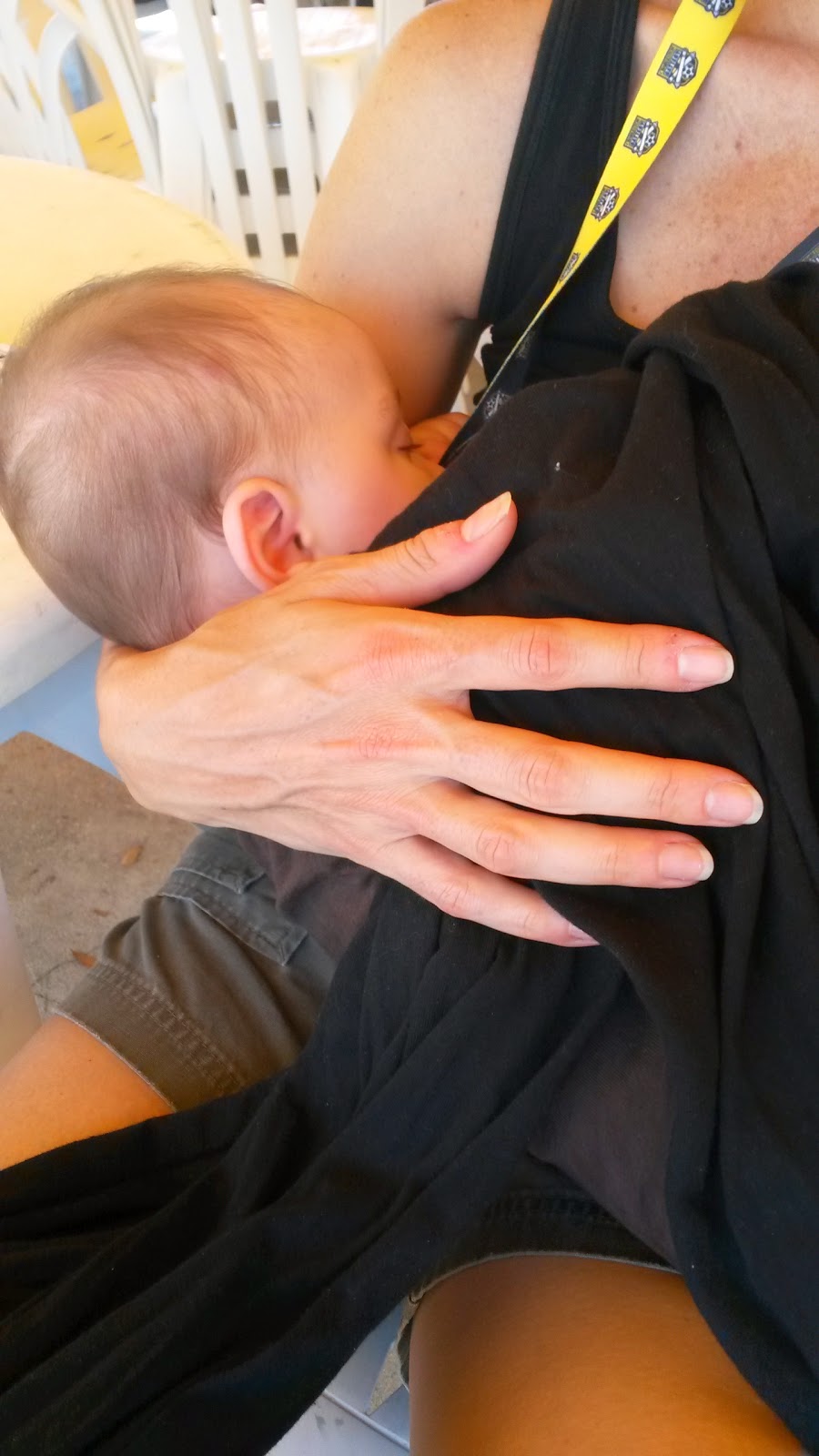 I was so proud of myself for nursing in public because I am normally too afraid to do it. But he was hungry and we weren't ready to leave yet so I gave it a whirl.  Afterwards he was content to sit for a while until we were ready to go.  All in all it was an absolutely gorgeous day and we all had a lot of fun (even if we didn't make it out of the first round).

Can't wait til next year!