Elliot is my little guy. I always call him that because he's my "baby".  And compared to Andrew he is little.

When they were born they were very close in size.  Andrew was 7 lbs 5 oz and almost 21". Elliot was 7 lbs 8 oz and 20". I called him my little pudge because he was - he was a little stockier than Andrew and was cute and squishy.

After every well check I've gone home and compared his stats to where Andrew was at that age.  At each one the difference in their sizes has gotten greater and greater.  Supposedly they have been close to the same height (I don't buy it), but as time has gone on the difference in their weight has become more pronounced.  At one year Elliot was 20.6 lbs (Andrew was 22.5 lbs). At his 15 month well check Elliot was 21 lbs even (Andrew was 23.62 lbs).So in that three month span Elliot gained less than 8 oz while Andrew gained over a pound.

Elliot hit 17 months a week and a half ago.  Yesterday I needed to take him to the doctor for a suspected sinus and/or ear infection (he has an ear infection) so of course they weighed him.  With clothes and shoes on he was 21 lbs 6 oz.  So in over two months he's gained, at most, 6 oz (I can't remember if he had on clothes and shoes when he was weighed at 15 months).  At 18 months Andrew was 25 lbs 15 oz.  Looking back at pictures I guess he was a little chunkier: 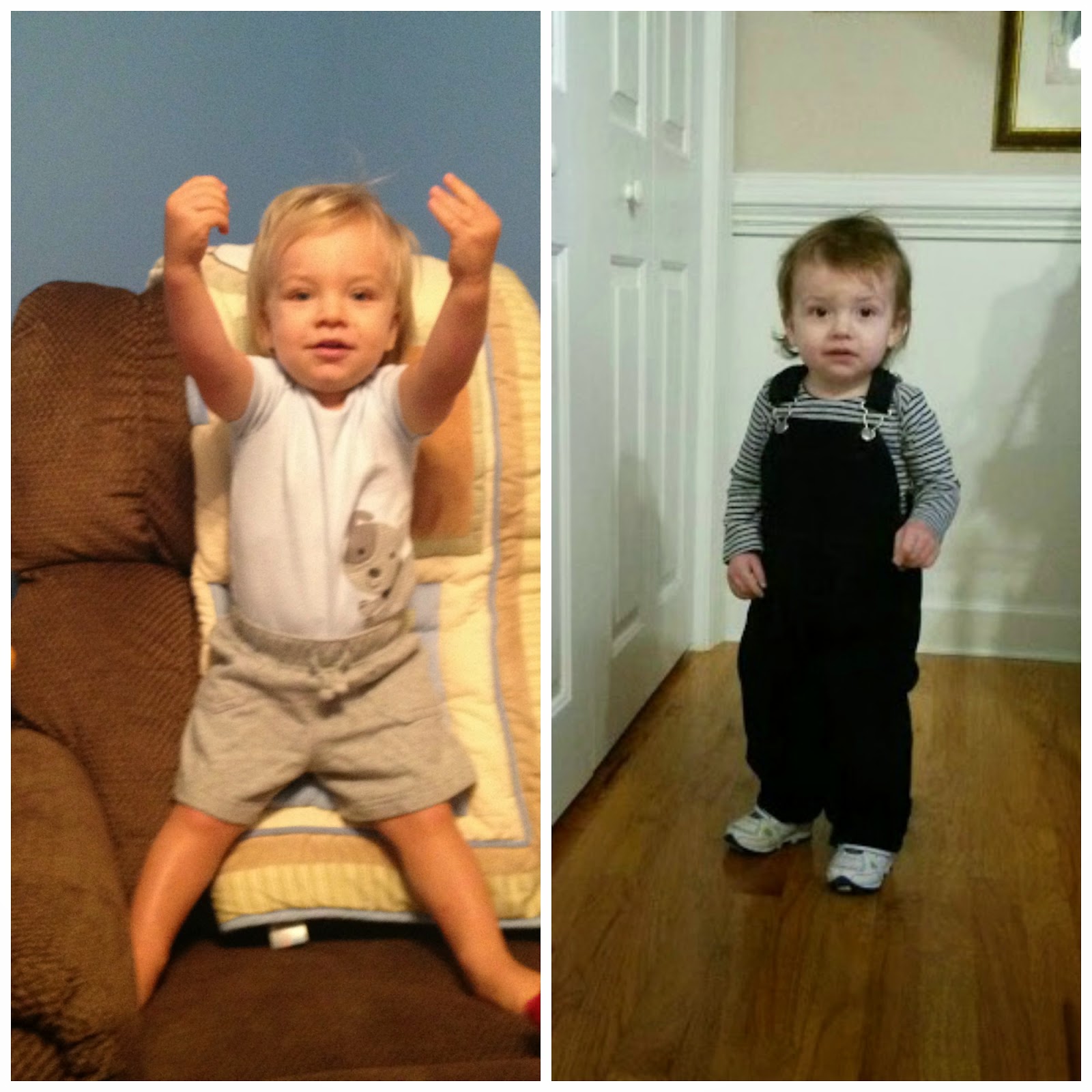 Andrew definitely had more of a belly than Elliot does, but he was by no means chubby. He never had much in the way of rolls, even as a little baby.  Elliot definitely doesn't have any rolls.  Those overalls he is wearing are 18 month size and I have the straps shortened as much as they will go.  They were still a little long on him.  Honestly he still fits in 12 month footie pajamas.  Some 12 month pants are getting too short on him, but the 18 month ones fall off.  He's wearing 12-18 month jeans today that are close to fitting, but are very loose around the waist.

We have his 18 month well check three weeks from tomorrow.  I'm curious to see what Dr. Graham has to say about his dropping weight percentile (yesterday has him in the 17th).  I try to get him to eat, but it's hard. He'll eat two bites of something and then throw the rest.  I did get him to eat some greek yogurt yesterday (with no hives) so maybe I'll be able to bulk him up a little with that.  He doesn't look emaciated or malnourished, but I worry about him just the same.

So yeah, all that to say he's my little guy, but I didn't realize just how little.