Yesterday afternoon I took Elliot to the pedi for his 18 month well check.  We rushed to get there for his 2:30 appointment and I prepared for the worst since that's normally around nap time and we typically have to wait FOREVER in the waiting room. Luckily he had napped from 9:30-1:00 so he was in good spirits.  He busied himself in the waiting room by eating some snacks and watching a little Puss in Boots: 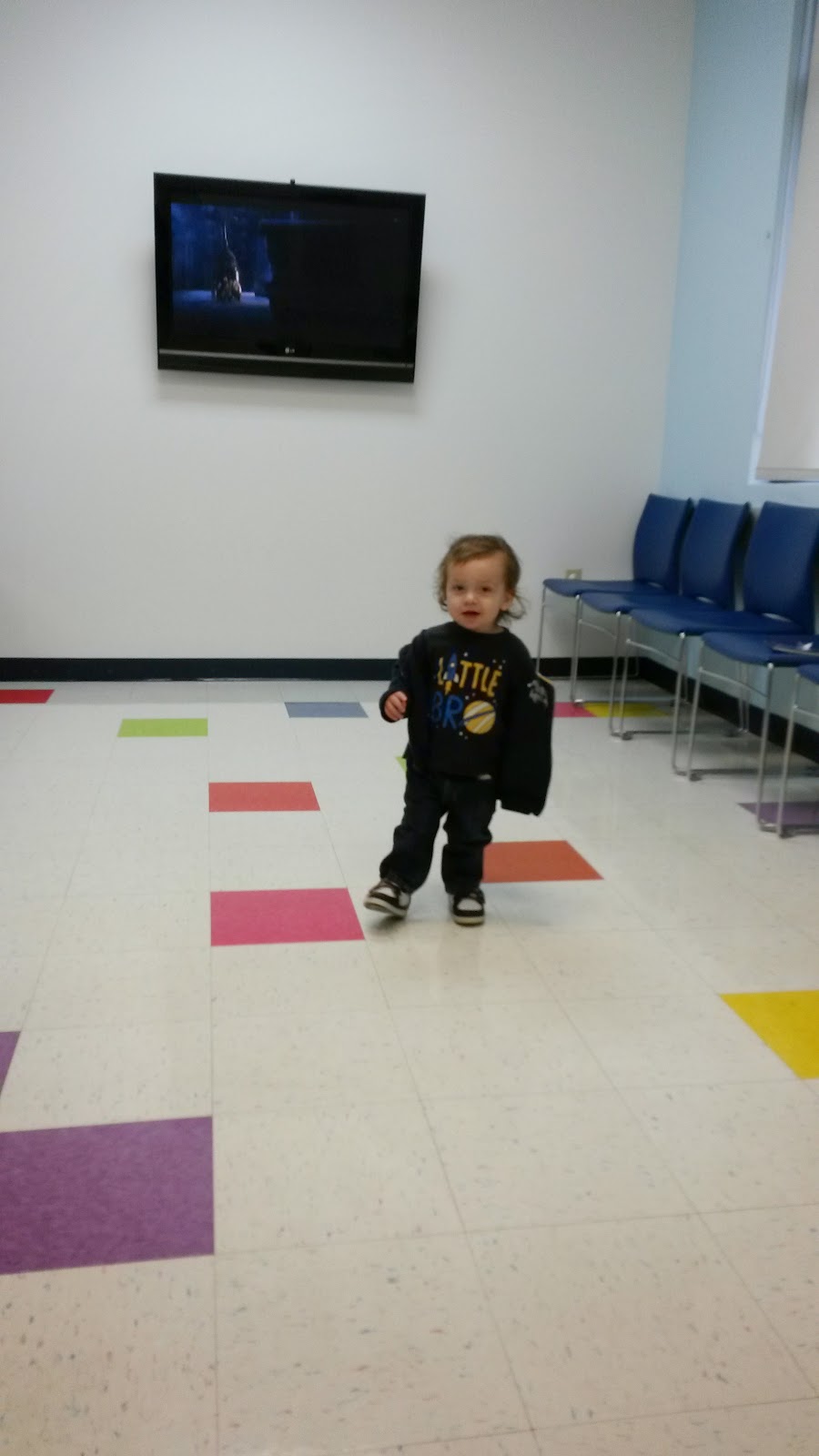 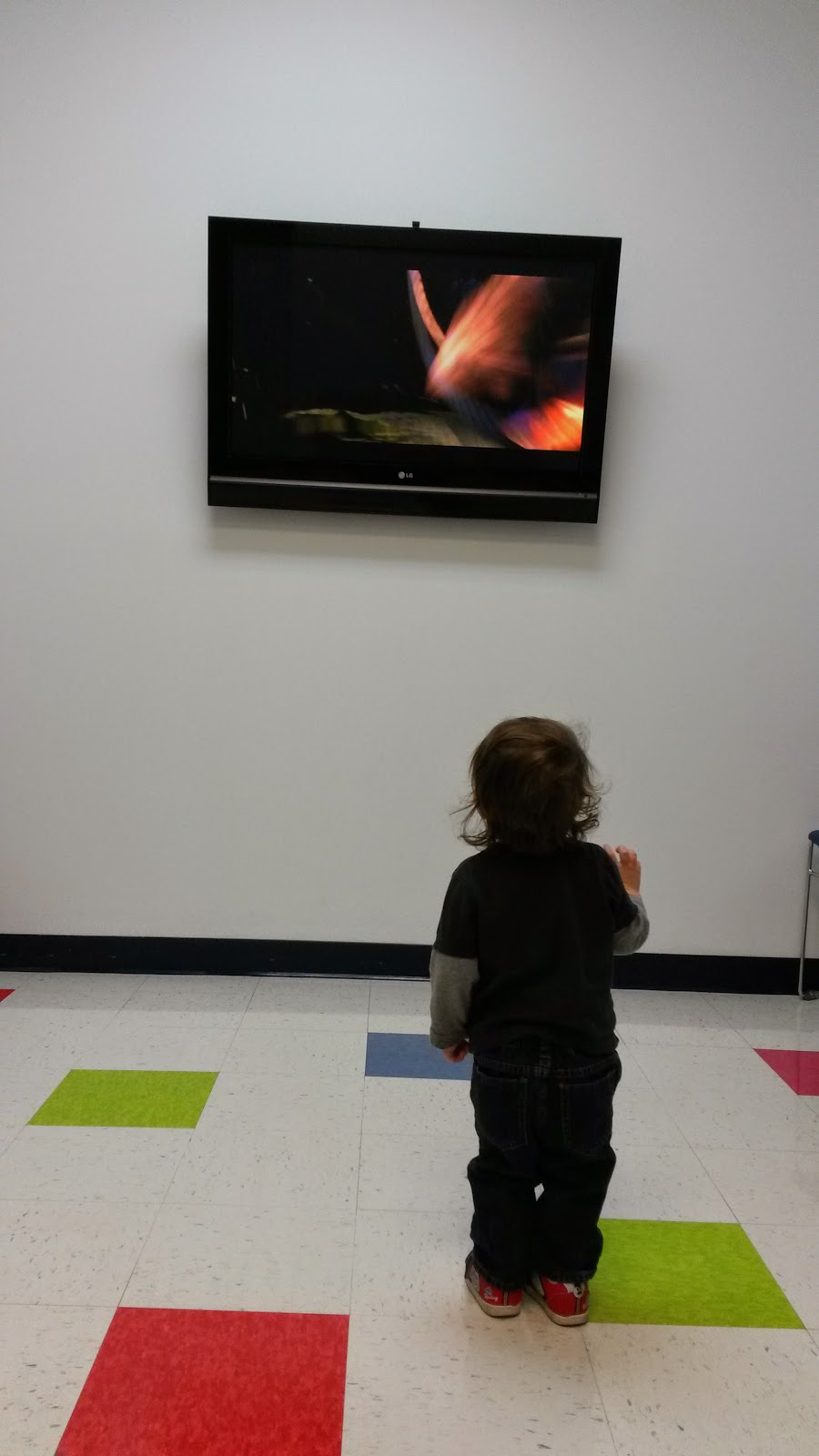 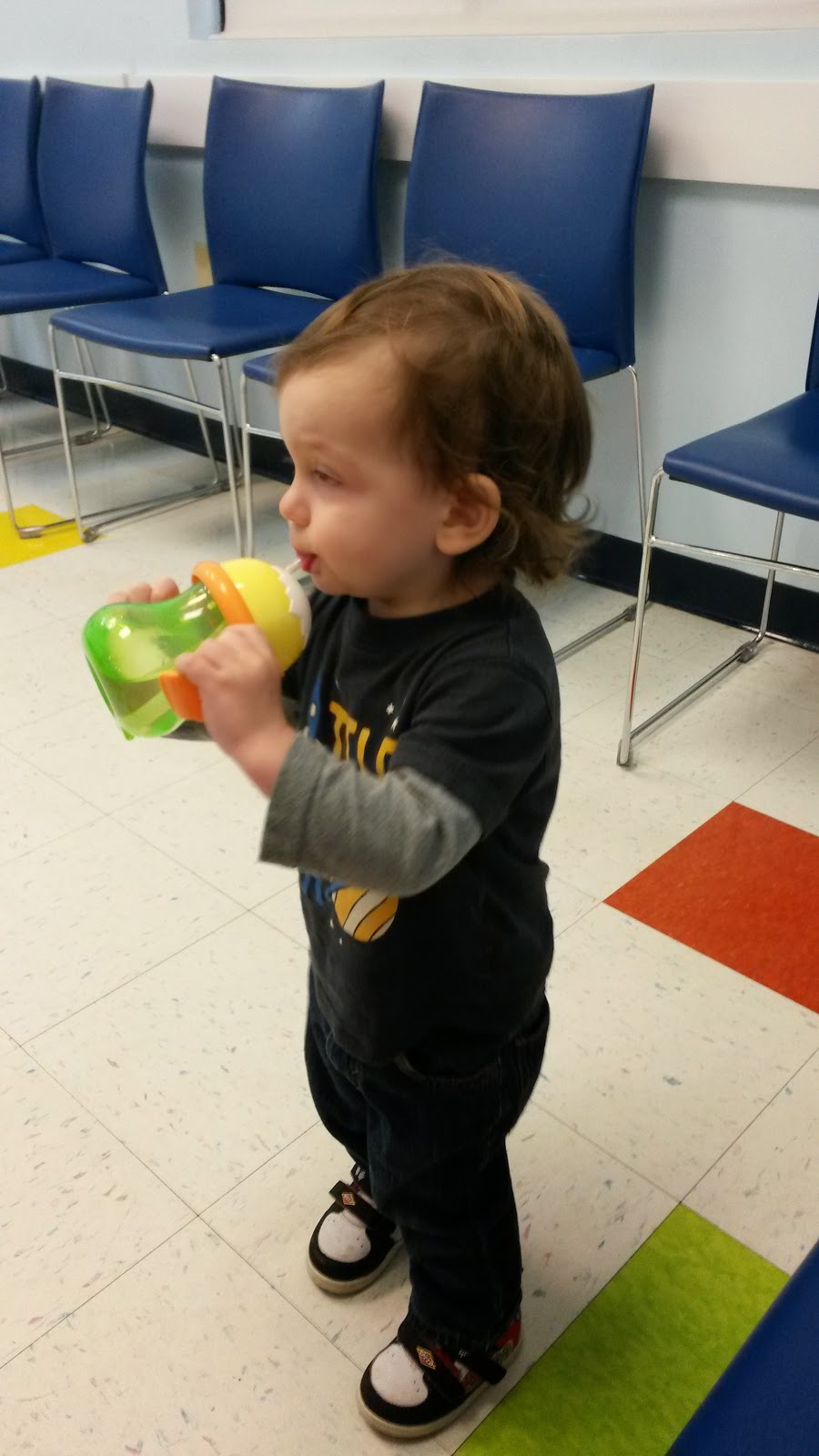 He also had fun running out to the reception area and flirting with the girls at the front desk.  My little ladies man.

We waited our typical 30 mins in the waiting room before being called back.   On the way there we stopped at the scale to get his height and weight.  He clocked in at 22 lbs 4 oz and 30.5".  I assume his weight was helped by the fact that he chowed down at Andrea's and she said he was eating everything in sight.

We were led back to the exam room and the nurse did her usual stuff with checking his temp, O2 sats and measuring his head.  After that we waited for Dr. Graham and Elliot entertained himself by rummaging through the drawers and pushing stuff around the room: 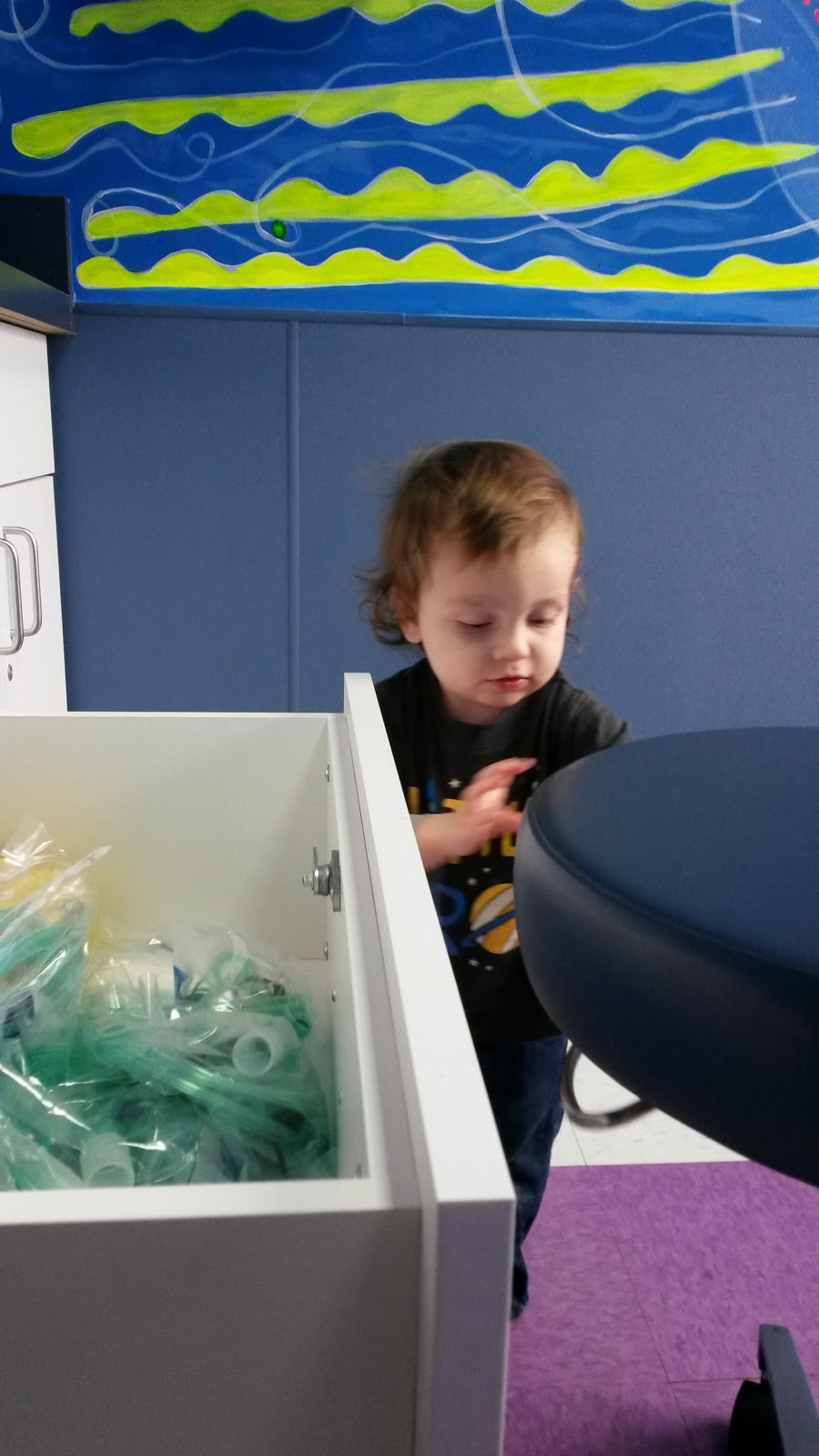 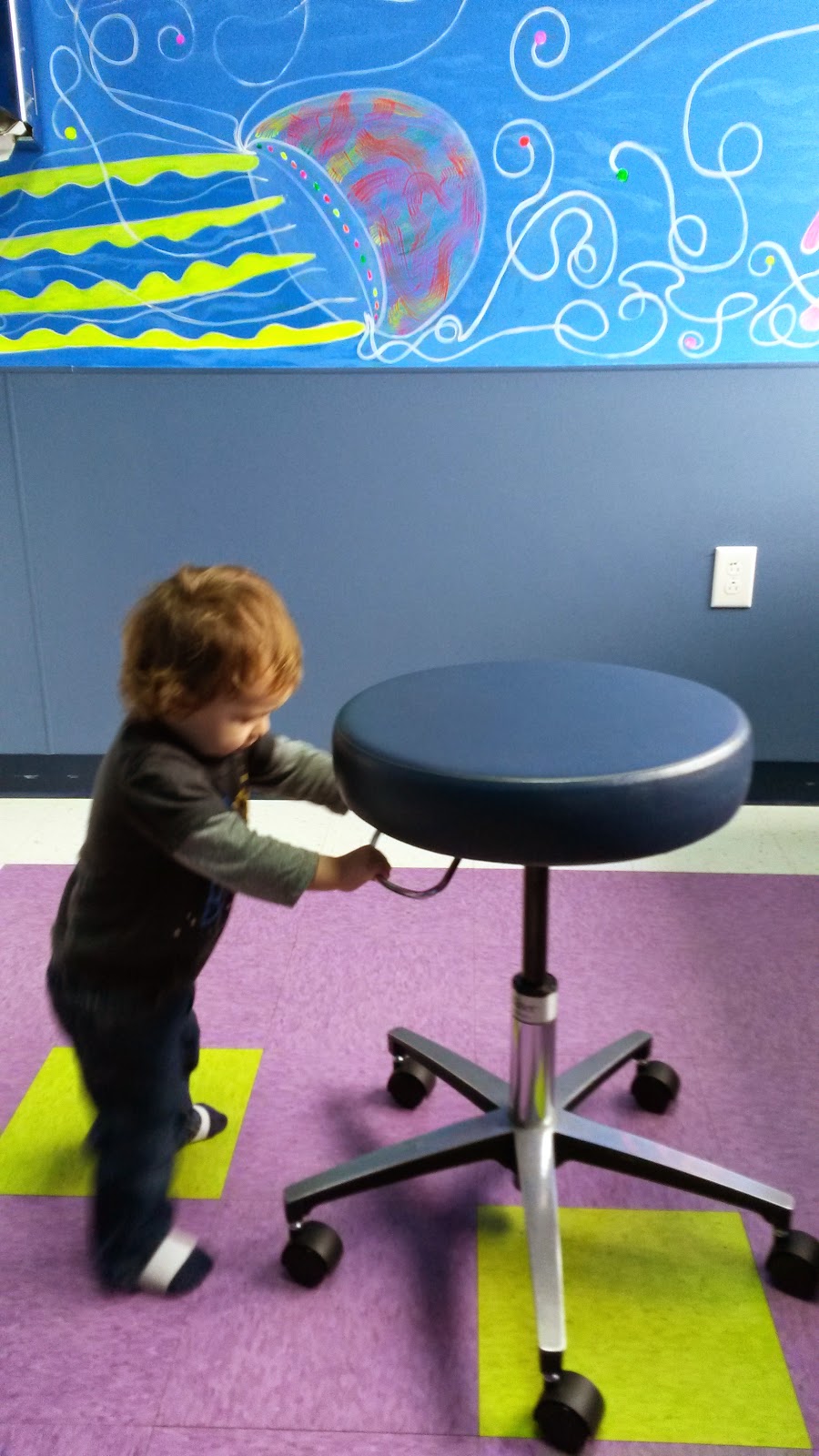 Thankfully it didn't take too long for Dr. Graham to come in.  He had Elliot's growth charts and he made a revision. He said that nurse appears to have a technique for measuring height that needs some work because according to it Elliot had shrunk in the last three months. He amended the measurement to 31.5", so here are his stats at 18 months:

For comparison purposes, Andrew was the same height (which somehow put him at 27%?) and 25lbs 15oz.  Elliot is definitely my little guy.  Dr. Graham pointed out that Elliot has never been an overachiever when it comes to gaining weight,  but he has been consistent on his curve so he looks great.  He told me we don't need to worry about him being a jockey when he grows up and he assures me that Elliot is doing fine with growing.

We talked about his vocabulary (Dr. Graham said the number of words he has is great), his appetite (he assured me that his pickyness on any given day is very typical at this age) and his personality.  He was very impressed that Elliot was making such great eye contact with him and was really observing what was going on.  I sat him up on the table and he patiently let Dr. Graham listen to his heart and lungs and look in his ears (that are all clear). He passed the 18 month screening based on the questionnaire I filled out.  We talked some more before he left for his next patient and before he left he told me that Elliot looks perfect - something I already knew  ;)

A couple minutes later the nurse came in to do the dirty work with the shots. He only needed to get one this time, for DTaP, so we laid him up on the table. He was completely calm throughout the whole thing and didn't even make a peep when he got the shot.  My little rock star.  We finished up, I scheduled Andrew's four year well check on the way out (how will he be four next month?!?) and we headed home.  All in all it was a perfect well check and it's good to know that we don't need to be concerned about our little guy. He's small but perfect  :)