7 Months! (A Baby and Body Update) 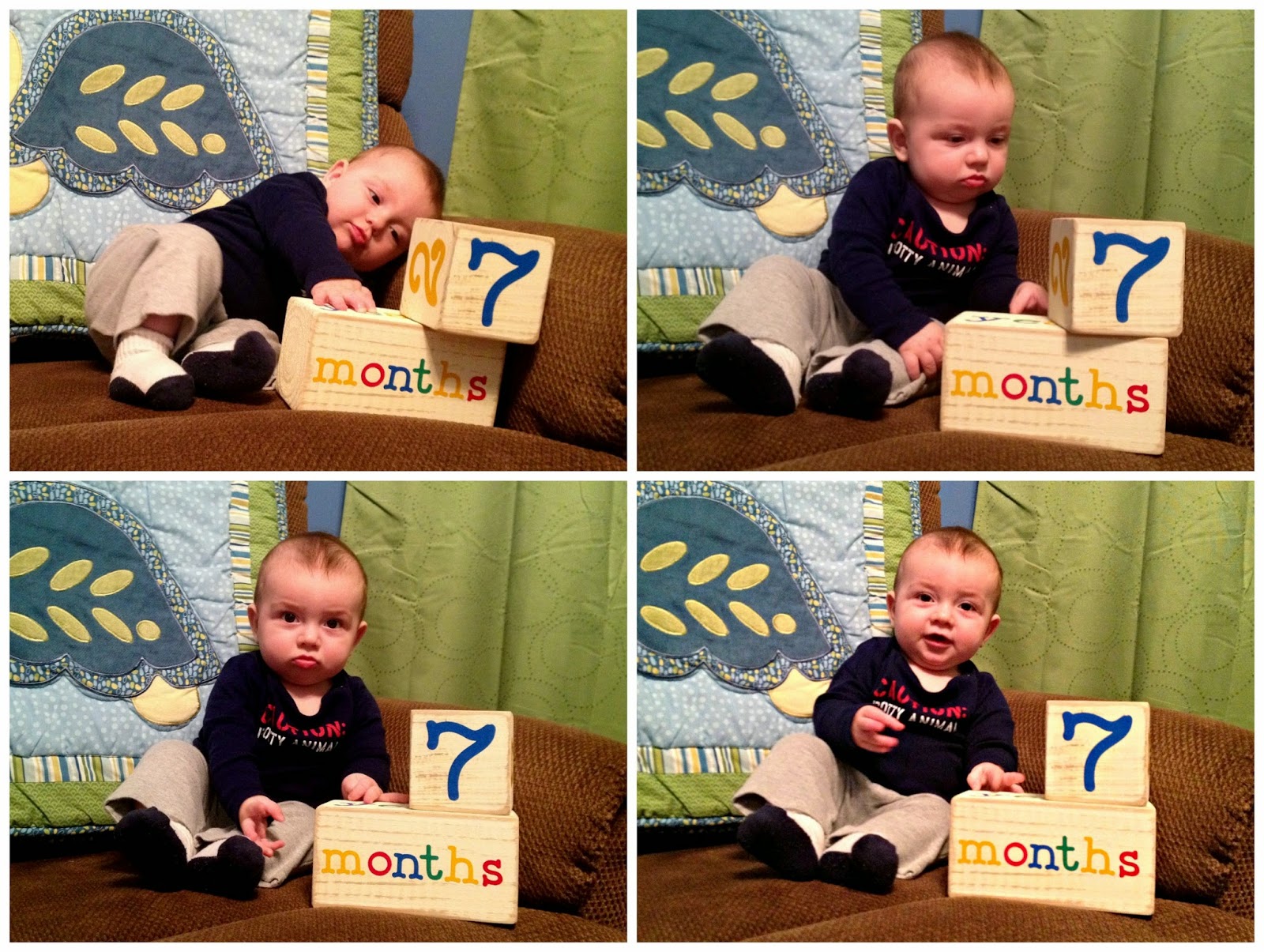 Whoa. How did that happen?  Has it seriously been 7 months since this little guy came flying into our lives?

Some days it's felt like it's dragged on (during those sleepless nights), but other days it feels like it has gone by in the blink of an eye.  It's been seven months of snuggles and tears and giggles and love.

Seven months and one day ago I was still worried that I couldn't possibly love another child as much as I love Andrew. Today I know that it's true that your heart expands with each child.  I look at that sweet face and can't believe I ever thought I couldn't love him as much. When I walk into his room in the morning and he pops up with this giant grin on his face my heart swells with so much love.

Elliot is still a different baby than Andrew (obviously). He is starting to settle in to more of a routine, though.  I don't want to jinx it, but he's finally starting to sleep at night (at least most nights).  The past two we got 11 hours out of him which is awesome. It would be even better if I could actually sleep.

The bottle strike is a distant memory (at least for now) and he's been sucking down milk like there's no tomorrow.  He's still being a little picky about eating, but he seems to love peas and carrots, doesn't hate sweet potatoes and isn't a fan of green beans.  I tried giving him a pickle to chew on since Andrew loved them, and all I got was a disgusted look: 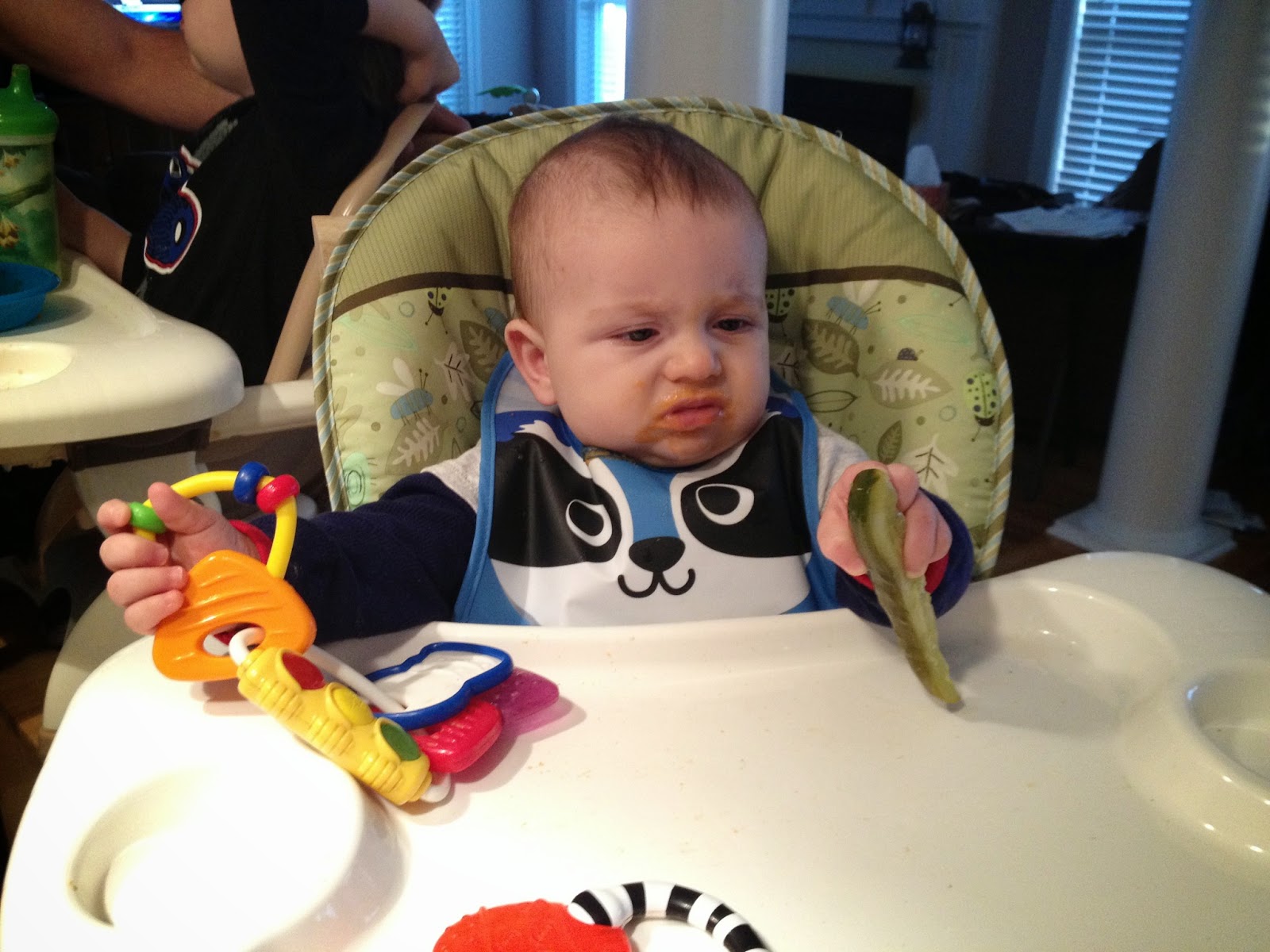 He still doesn't have any teeth and I'm fine with that - less biting!  As far as his size, he is now in size 3 diapers, can fit in 6 month clothes, but is mostly in  6-9 or 6-12 month stuff.  His hair hasn't fluffed up like Andrew's did, but it's starting to fill in more.  I would estimate that he is about 18 lbs and I have no idea how long he is.  He's growing well and I have no concerns there.

We're still working on sitting unassisted. He can do it for short periods of time before he falls over. He rolls all over the place and scoots backwards, but we aren't anywhere near crawling. Andrew was 9+ months when he crawled for the first time so I'm not concerned there.  He's taken a real interest in whatever Andrew is doing.  Yesterday anytime Andrew was playing with something Elliot would try to scoot over to him and grab at whatever he had.  I have a feeling this is just the beginning of many battles for toys.

All in all he is doing very well and I'm very pleased with how far we've come.

I'm less pleased at how far I have come as far as my postpartum body.  Bathing suit season is just around the corner and I am NOT ready. I tried on every swimsuit that I own this weekend and I almost cried.  Everything makes me look and feel gross.  I am clearly going to need to go shopping before hitting the pool or the beach.  I need bigger tops to contain me and more flattering bottoms.  Here is the best of what I have currently: I really need to start running more and get serious about my workouts (and my diet).  I still have the stomach pooch and my butt and thighs are depressingly large.  I knew it would probably be harder to bounce back this time with a couple more years on me, but I thought there would be more progress by now.  I need to rein in my sweet tooth and control my eating habits better. I'm just always so hungry. And I think that while I am still breastfeeding my body is going to hold on to some of the weight (just like with Andrew).  Being pale doesn't help...

So that's where we are at seven months.  Hopefully by 8 months I'll see some progress with my body and I KNOW we'll see some changes with Elliot.