When we were initially talking about having an actual birthday party for Andrew I had the idea of doing a pirate theme since he loves Jake and the Neverland Pirates.  I started googling things and coming up with ideas.  I will say that the first place I went was not pinterest, though. I have an account on there and when I found images of things I liked I did pin them, but I didn't start out perusing on there.

The reason is simple - pinterest makes me feel like an inadequate mother.  I go on there and see all of these crafts that people do or the decorations that people make for their child's birthday parties and it in turn makes me feel like a mom fail.  I really just don't have time to make five different kinds of cake pops and color coordinated decorations with elaborate themes.  Maybe I just lack the motivation, I don't know.

Anyway, I pinned a couple cake ideas because once I put the idea of a pirate cake in Andrew's head there was no getting it out.

Fast forward to us deciding to forgo the big birthday party this year and do an outing to the zoo instead (if effing Mother Nature would cooperate!).  I still wanted to make a birthday cake for Andrew even if there was no party.  Every time I asked him what kind of cake he wants he would instantly say "Pirate cake!".  I came upon this one and decided to give it a whirl: 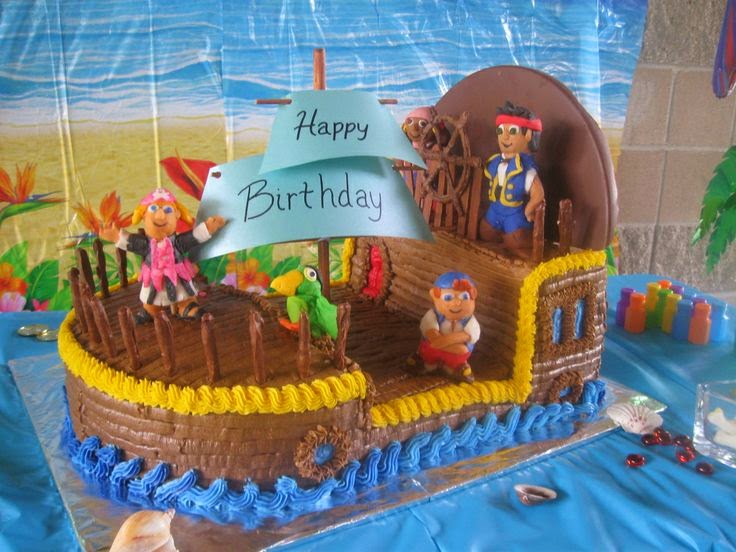 Before you laugh let me clarify and say I had no intention of making the little characters.  I looked up online who locally carried the little Jake and the Neverland Pirates figurines and hightailed it to JC Penney to pick some up.  The cake itself didn't look too difficult as far as shapes were concerned.  It looks like the front is a round cake cut in half and stacked and the back is a sheet cake cut and stacked in three layers.  How hard could it be, right?

I stopped by the grocery store on the way home in hopes of buying some icing from the bakery and getting them to dye some brown for me (I did that for his 1st birthday cake), but the bakery person was gone for the day and the other yahoo working there didn't know how to sell the icing apparently.  So instead I picked up the ingredients to make my own buttercream icing.

Before getting Elliot in the tub I mixed up the cake mixes and got the 9" round (yellow) cake and the 9x13 (chocolate) cake in the oven.  Once the boys were in bed I mixed up the icing and went to work constructing the cake.  I really should have taken pictures during the process, because in the beginning it looked like I had the makings of a giant pinterest fail.  I was already tired, however, and didn't stop to take any pictures of the mess. Instead I slapped some more icing on it got to the decorating.

The brown isn't as dark brown as I wanted, but since I was working with red, blue and yellow food coloring it was as good as I could get.  I was afraid that the back of the cake was going to topple over, but a couple dow rods inserted for stability helped. 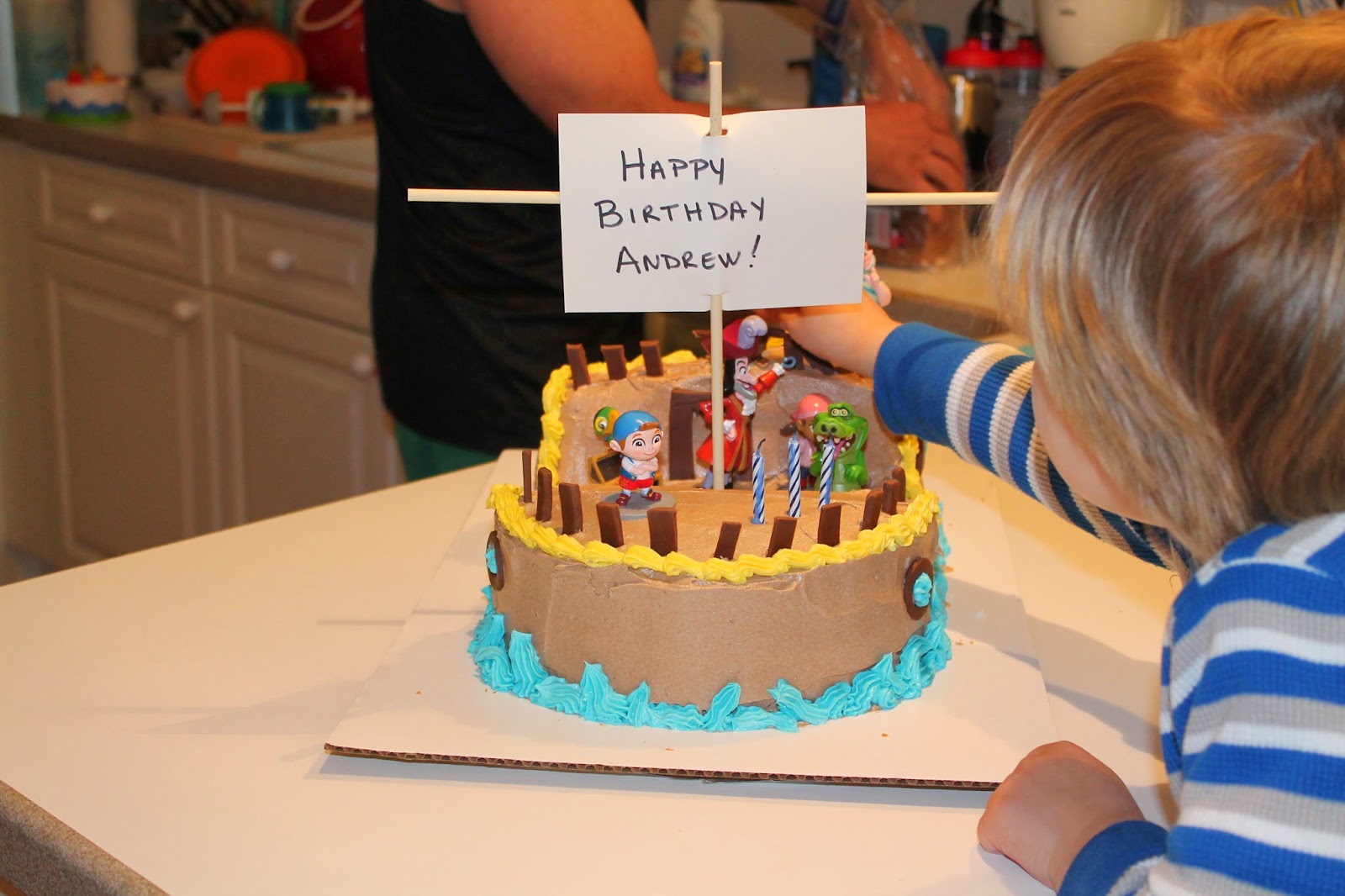 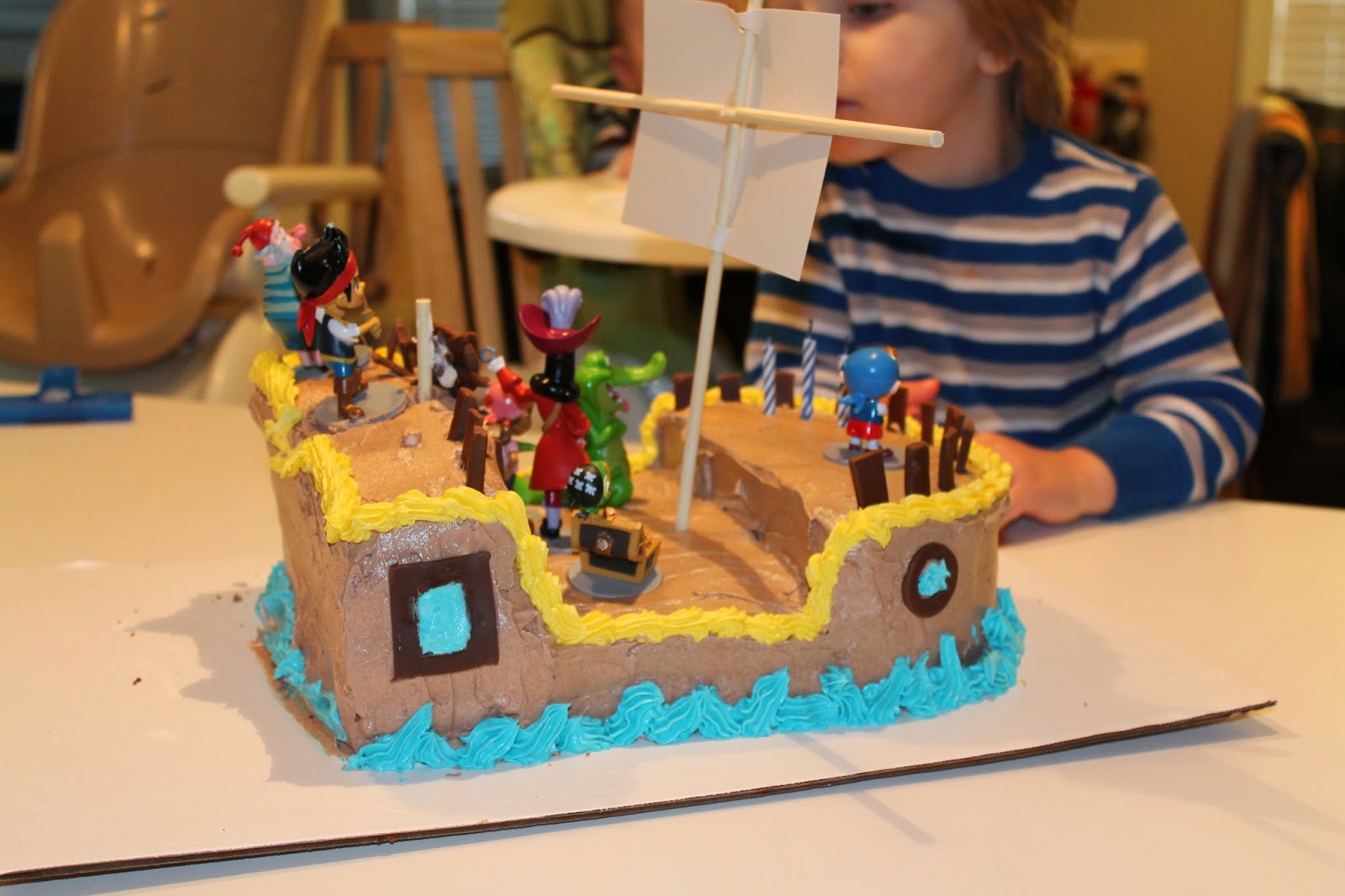 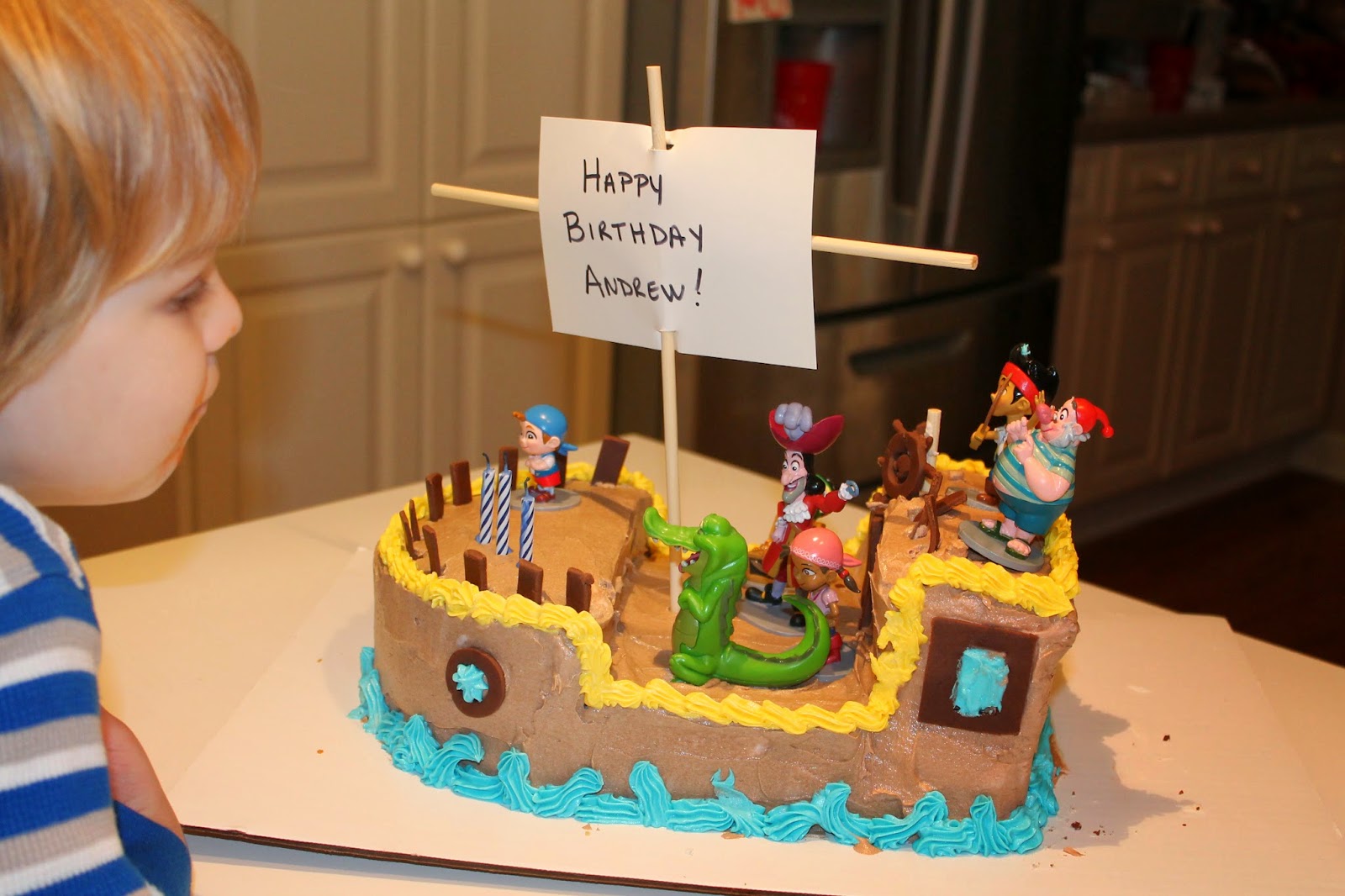 There were a few decoration mishaps (ran out of blue icing) and that messed up part of the yellow border in the back is from Jake falling off, but all in all I think it came out ok.  The most important thing was that Andrew loved it.  He particularly loved the candles and I had to relight them five times so he could keep blowing them out.  So while my cake might not look exactly like the inspiration one, it wasn't a complete fail. And next year I will give myself a little more time to work on whatever cake I'm going to make for him so I can make it even better.