A Battle of Wills

Friday I was exhausted and I had had it.  Elliot's bottle strike was taking it's toll on me mentally and emotionally.  I checked in with Andrea multiple times to see if Elliot had eaten anything. Each time I got the same response: "Not yet".

J picked the boys up from daycare and our plan was for him to (try to) feed Elliot a bottle before I got home. We thought maybe he'd have more luck if I wasn't there.  When I got home I snuck in and made sure he couldn't see me.  J was able to get 3 oz in him while I went and showered. He had heated up more, but Elliot was fussing so he laid him on the playmat.  On a whim I grabbed the bottle, picked him up and attempted to feed him. I was shocked (and thrilled!) when he sucked down the 4 oz bottle from me.  I (stupidly) thought maybe we were on the right track.

The plan that night was for me to nurse him before putting him down and he would get bottles overnight.  I gave in and nursed him when he was up at 12:30, though. He started making noises at 5:00 and J went down and made a bottle.  He was going riding that morning so at 6:45 he brought the monitor back up and left it so I'd hear Elliot if he started to fuss. At 7:15 he was shouting so I got up. I saw the bottle that he had made up still sitting in the cup of warm water.  I took that to mean that Elliot refused the bottle and my heart sank.  For the hell of it I grabbed him and the bottle and saw if he would eat.  I was again shocked when I got this: 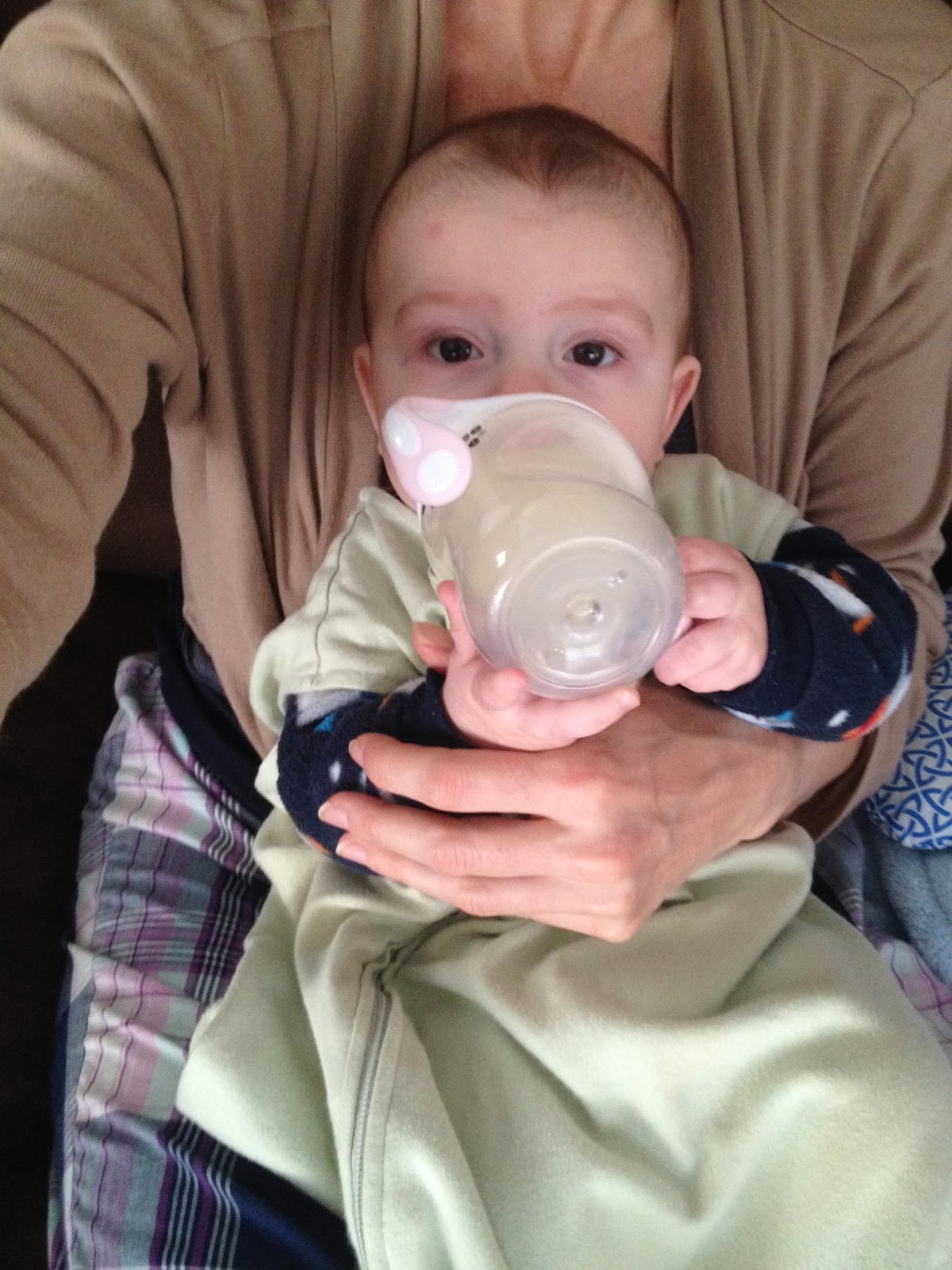 I nursed him for a little bit to get him down for a quick nap before we went to go get his 6 month pictures done (those will be up soon).  So he ate at 9:30 and was pretty pleasant for his photo shoot.  We were going to go downtown to the children's museum that afternoon, but things quickly went downhill.  Every time we tried to get him to take a bottle it turned into a crying fit (both him and me).  At one point I put him in the crib and ran upstairs because I couldn't take it.  I was getting so upset that he wouldn't take the bottle and I found myself getting angry that he wouldn't just give in.  I knew he was hungry - why wouldn't he just eat??  I burst into tears so many times and started getting snippy with J.  It was wearing on me so much. No matter what we tried he would fight us.  Bottles, baby food or even BLW attempts. Everything just made him upset, which in turn made me upset.

At 6:00 PM - 8.5 hours after he'd last eaten - I heated up a small 2 oz bottle and gave it a shot. He took it with no fight and started sucking it down. I quickly called to J to have him heat up more. All in all he sucked down 8 oz and I was relieved.  Again that night I nursed him to bed and when he got up at 1:30 J went down and tried with a bottle. It was an hour before he came back to bed, but he had gotten Elliot to take the bottle, so I was relieved.  When he woke up at 7:45 I went and nursed him because I was about to burst.  I tried some bananas with him when Andrew was eating breakfast, but it was a no go. At 11:00 I heated up a small bottle and tried it to see if he'd fight me. I almost cried with joy when he lunged for the bottle. He sucked it down and I nursed him a little so he'd take a nap. He took an almost 3 hour nap and I was thrilled.  A while after he got up we heated up another bottle and I tried feeding him again.  Yet again he took it.

A couple hours later when it was naptime again I heated up a small bottle and J tried feeding him. He took it with little resistance and went down for a nap.  To say I was relieved was an understatement.  He'd taken 4 bottles for us, which was more than he'd taken in the past two weeks combined.

I heated up a small bottle before bed, but he didn't want it. He was tired so I gave in and nursed him. He didn't eat all that much so I think he just wanted the comfort.  He slept from 8:30  until almost 4:30 this morning. I went and nursed him quickly and had him back down within 15 minutes.    I got him up at 7:00 this morning and he was all smiles. 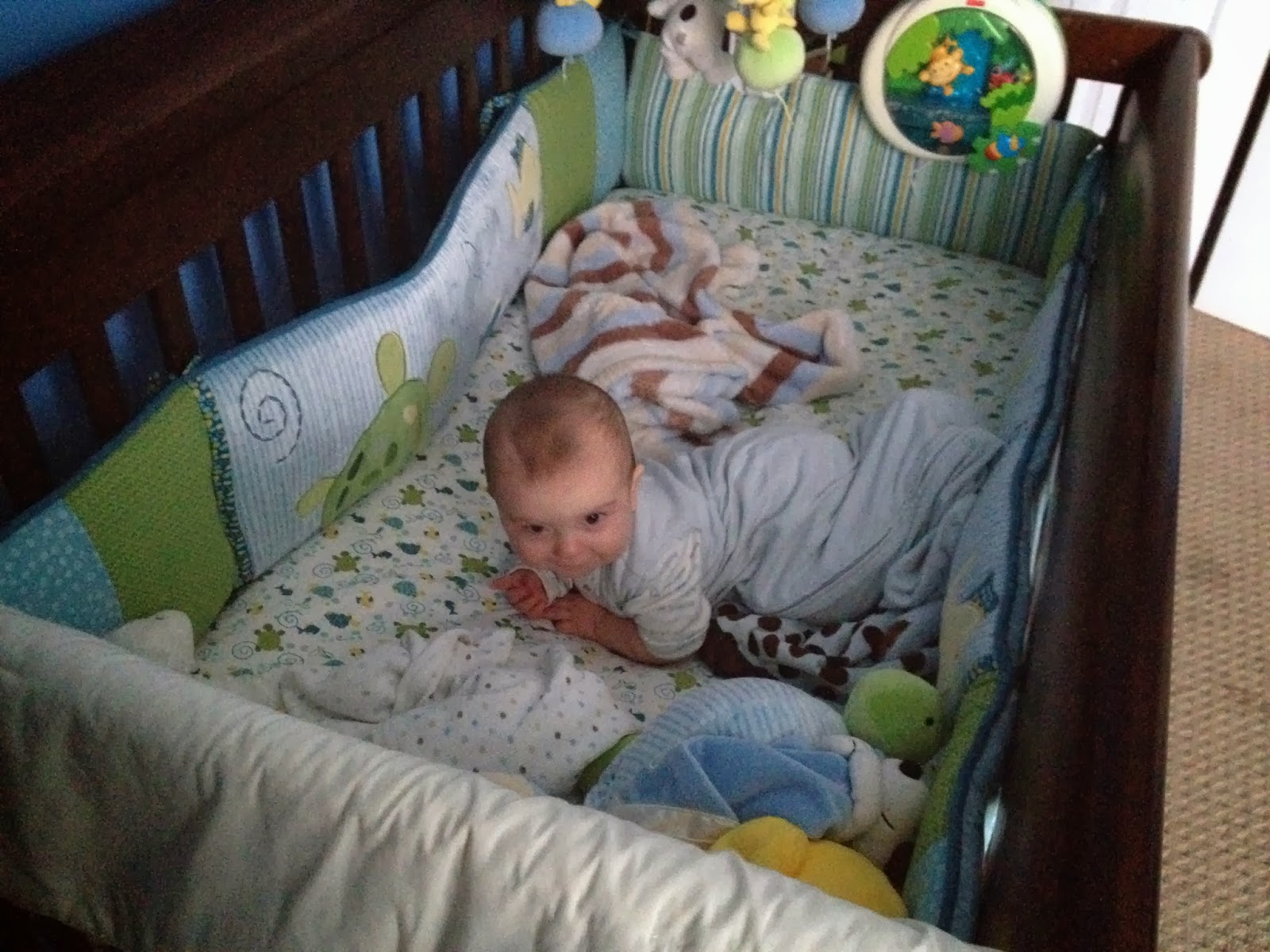 Yes, there is a bunch of crap in  his crib and I need to take those stuffed animals out now that he's rolling around in there.

I nursed him and got the boys ready to daycare.  I dropped them off and went over everything with Andrea to let her know how the weekend went.  I left four 3 oz bottles plus an additional 2.5 oz for him and said a little prayer that he would take some of it.  I just sent Andrea a text and got this: 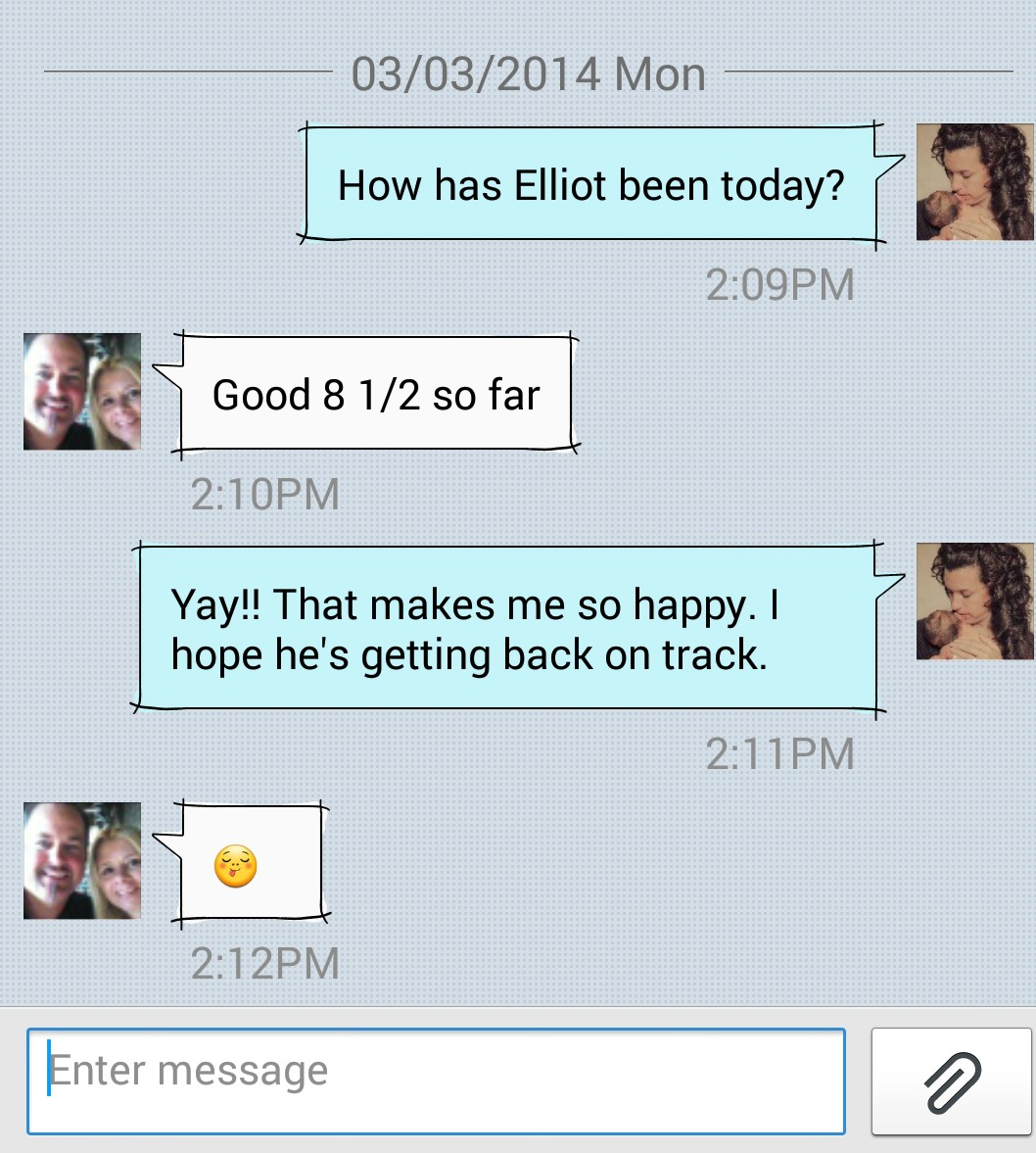 To say I'm relieved is the understatement of the year.  8.5 oz is more than he had Thursday and Friday at daycare combined.  I'm not going to claim victory just yet, but maybe, just maybe we have won the battle of wills with our 6 month old and gotten him back on track with eating during the day.  Only time will tell...