The time has come for Andrew to start at his new school.   After stressing out and being afraid that we wouldn't get him in, he has now started at Children's Discovery Center (our first choice of places to send him).  For the past week I have been talking it up to him and trying to get him excited about going somewhere new. After spending three years with Andrea it's going to be a really big change for him.

Yesterday morning he woke up extra early (6:15) because he wet the bed (J forgot to take him to the bathroom before bed).  That meant he ate breakfast extra early and we were ready to go by 7:15.  On the way there we passed one of the elementary schools in in the district (not the one he'll be going to) and he asked why he can't go to that school. I told him that school is for bigger kids and he'll get to go to one in a year or two.  Once we got to his school I attempted to take a first day picture of him.  My little ham gave me this: 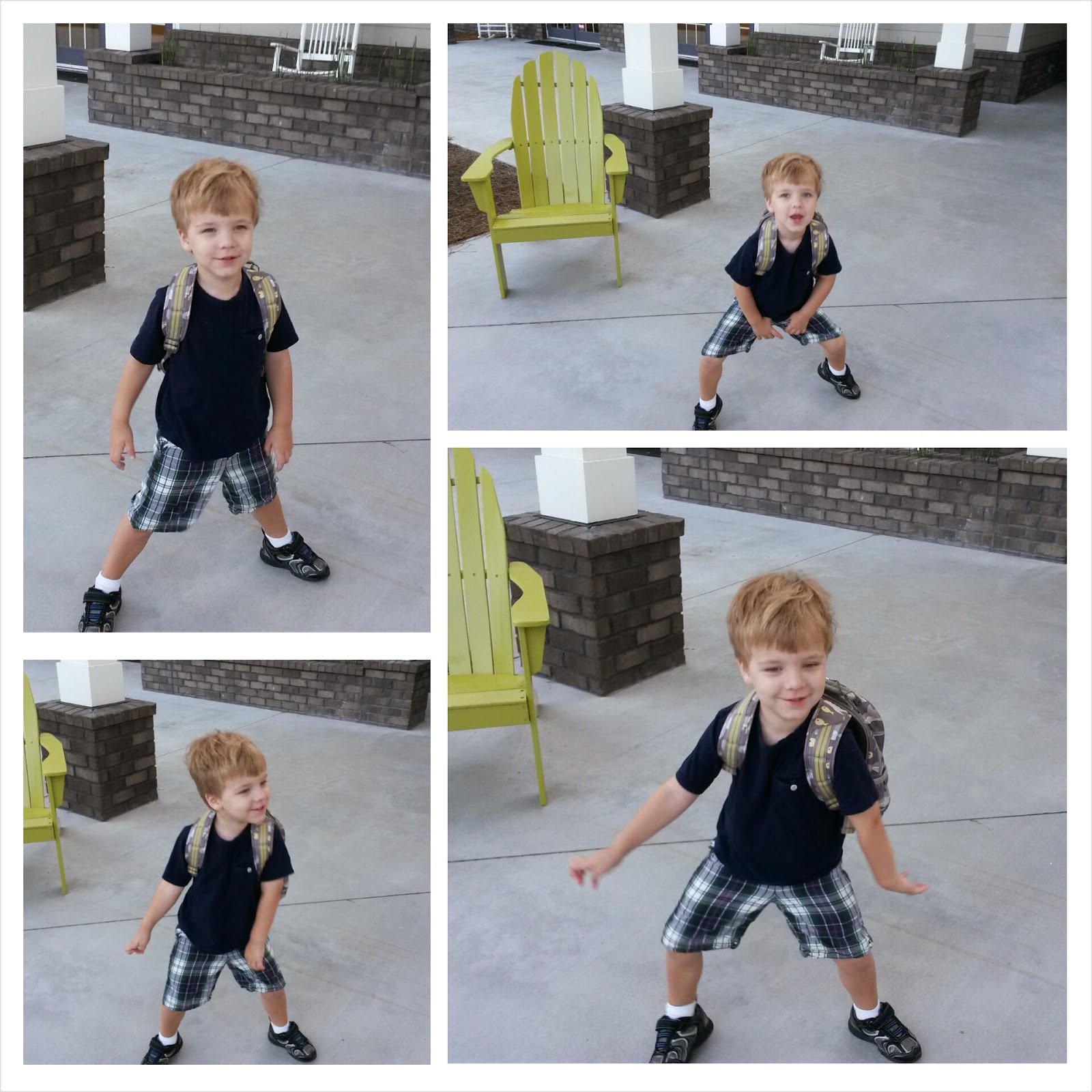 I had to get someone to let us in since I didn't have a door code yet.  We got inside and Heidi took us back to Andrew's class (Pre-school A).  Chelsie, one of the teachers for Pre-school B showed us his cubby and he hung up his backpack and tucked his nap mat in there.  Andrew was being a little shy and clingy at first, which had me nervous.  Chelsie told him he could pick anything off the shelf and take it to one of the tables to play with it.  He was still hanging back, so she asked if he wanted to play with some legos. He smiled and said "Yes" so she grabbed them off the shelf and put them on the table for him.  He went to work so I gave him one more hug and kiss and headed back out to the lobby to finish registering.

We got everything taken care of including registering my fingerprint on the scanner so I can get him checked in and out every day - J will have to do his the first time he does a drop-off or pickup.  Once all that was done I headed out the door and went to work.  I admit that as I walked to my car I teared up a little bit.

Since their hours are better than Andrea's (open until 6:15 instead of only 5:30) I was able to go to my Body Pump class and still go pick him up.  I got there and headed back to his class.  He was with a half dozen other kids playing with some blocks at a table when I walked in. As soon as he saw me his face lit up and he ran over to me.  I asked him if he had fun and he said "Yes". Heidi was in there and I asked how he did. She said he had a good day. When parents started showing up for pick ups he got a little overwhelmed so she took him back to a quieter area with her. She said there were a few tears, but he was fine once things settled down.  I got him checked out and we headed home.

We talked in the car as I was driving home. I asked him what he ate for lunch and he told me chicken and green beans. When I asked if he ate the green beans he said "Yes!".  If he did that is a minor miracle because getting him to eat vegetables at home is a constant battle. Hopefully seeing a bunch of other kids eating the same thing is going to inspire him to be more adventurous with his food choices.  I asked him if he had fun and he said that he did.

This morning we got him up for breakfast and to get ready for school.  He was saying that he would go to school tomorrow and I was prepared for a meltdown when we had to leave, but he walked down to the car willingly (with a pit stop to look at leaves): 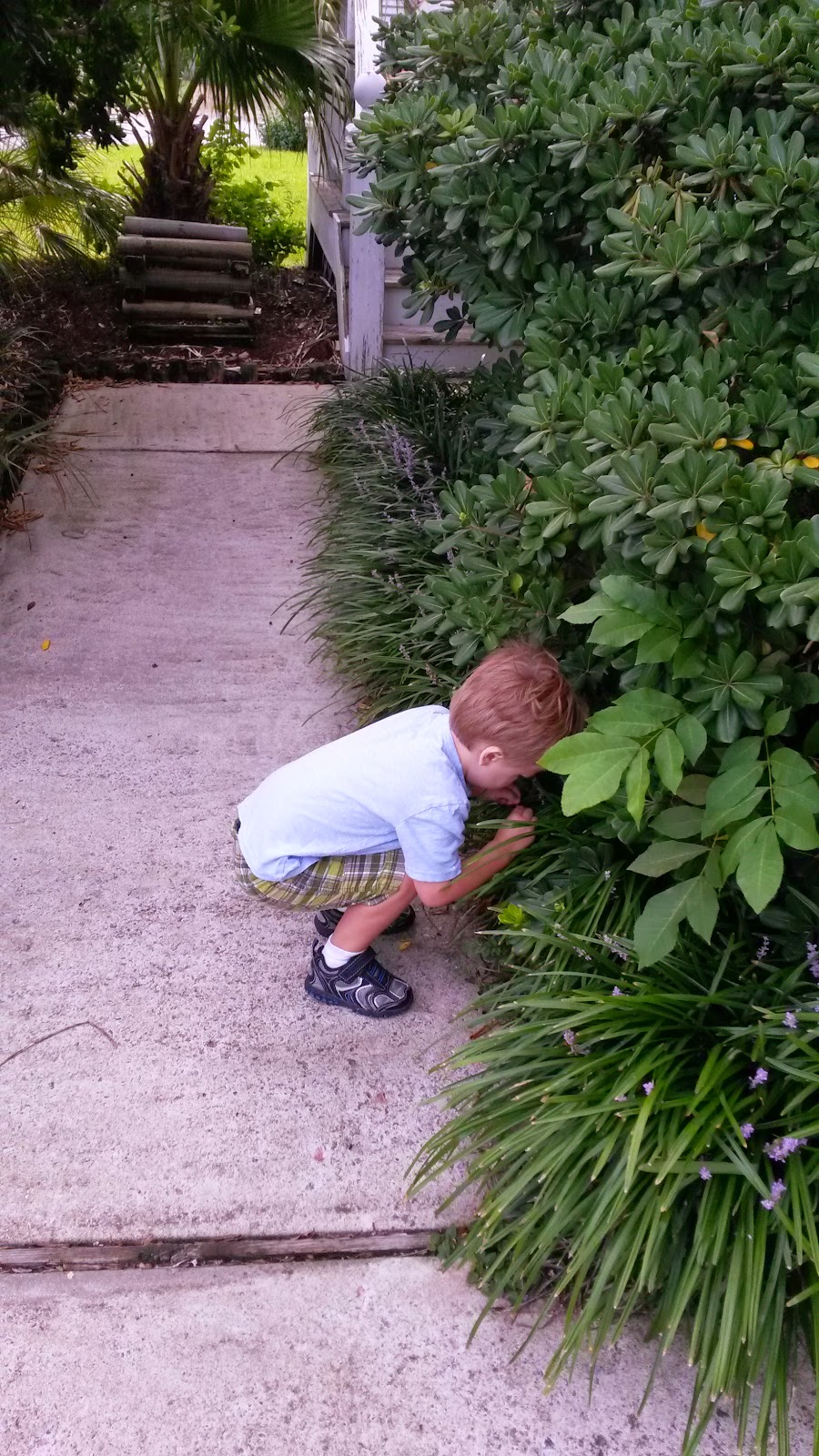 We walked in, I checked him in, and we walked back to his class. He pulled back on my hand and said he didn't want to go in there.

I told him we needed to go in to hang up his back pack so he followed me in.  Two little boys were playing with legos at the one table and I asked if he wanted to play with them. He didn't and he was being clingy. I showed him the puzzle that was sitting on the table and he instantly got interested. 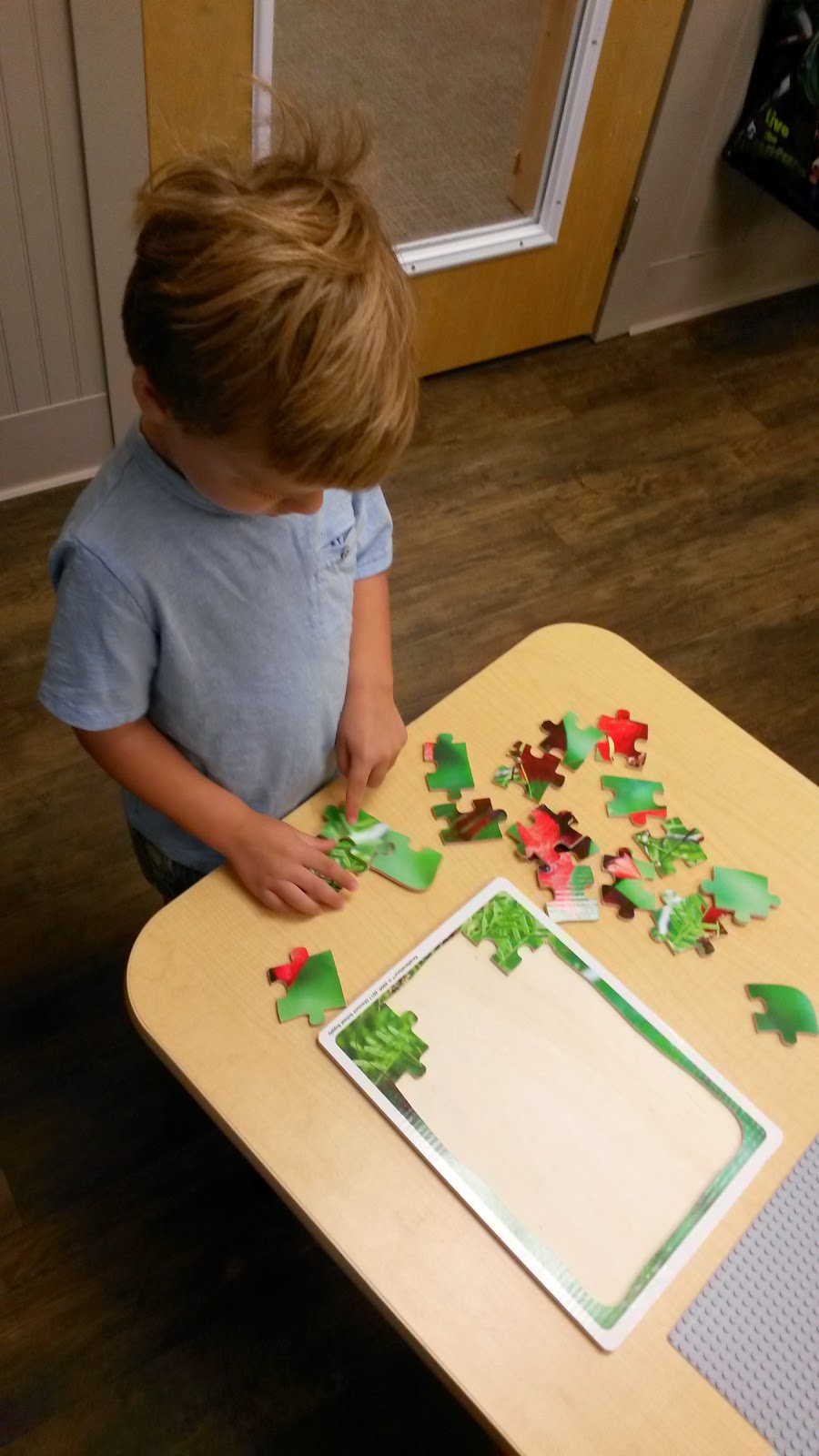 I gave him a quick hug and kiss and told him that I would be there a little earlier today to pick him up.  As I walked out the door I looked back to see him and Chelsie working on the puzzle.  I still didn't get to talk to his actual teacher, but I am planning on sticking around this afternoon until I can talk to one of them.

All in all I think it's been a good start. I think he's really going to get a lot out of it and I can't wait until he starts making some little friends.  My little boy is growing up...