Yesterday afternoon I took Elliot to his pediatrician for his one year check up.  I had been looking forward to it because I have been really curious about how big he has gotten.  Back at the end of July I took him in for an ear infection and he was 19 lbs 15 oz at just over 11 months so I knew there was no way he would have tripled his birth weight at 12 months since he definitely has not gained 2.5 lbs in just a month.

Anyway, I picked him up from Andrea's and we headed to the doctor.  While I filled out some updated paperwork he busied himself playing in the waiting room: 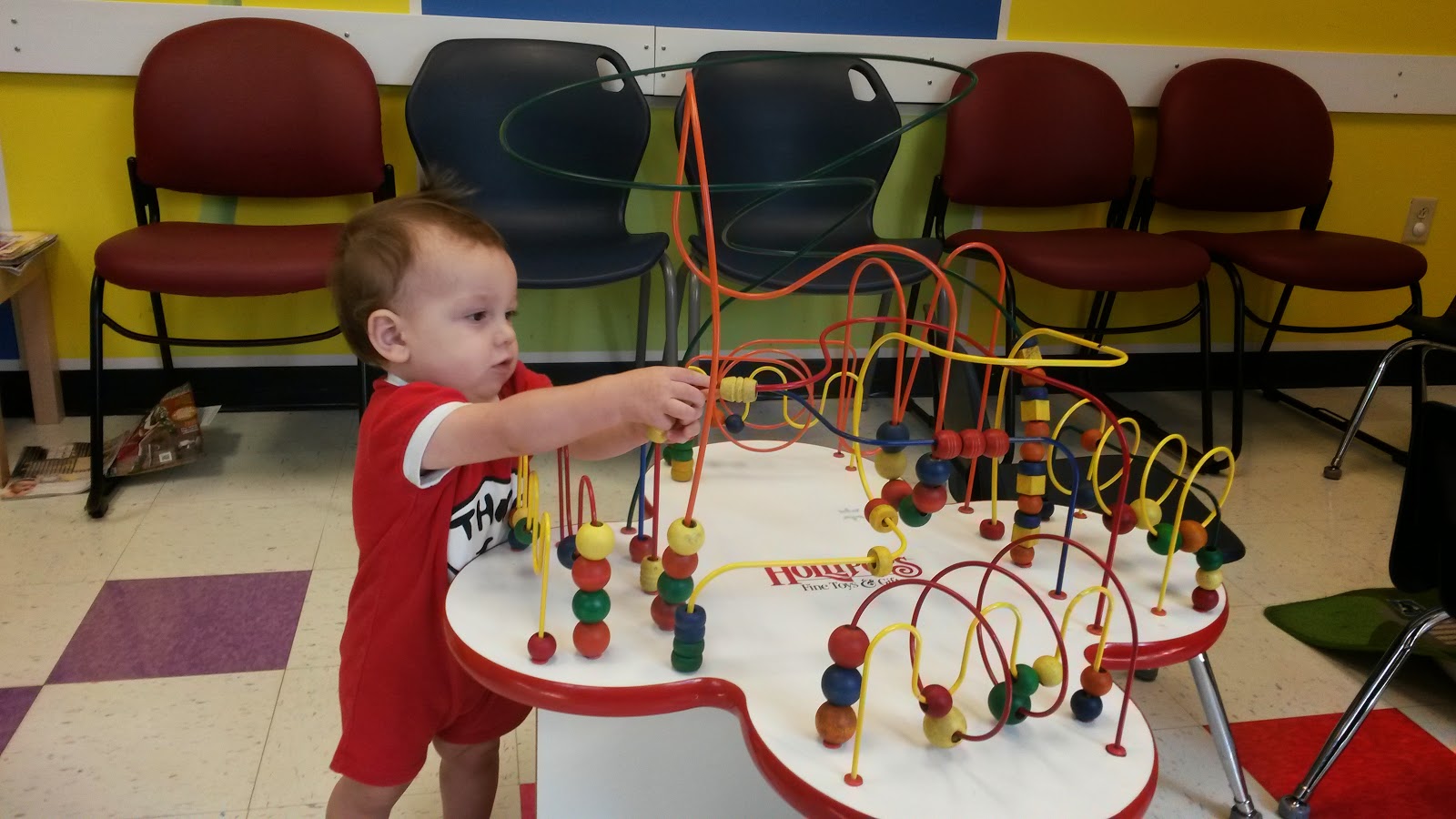 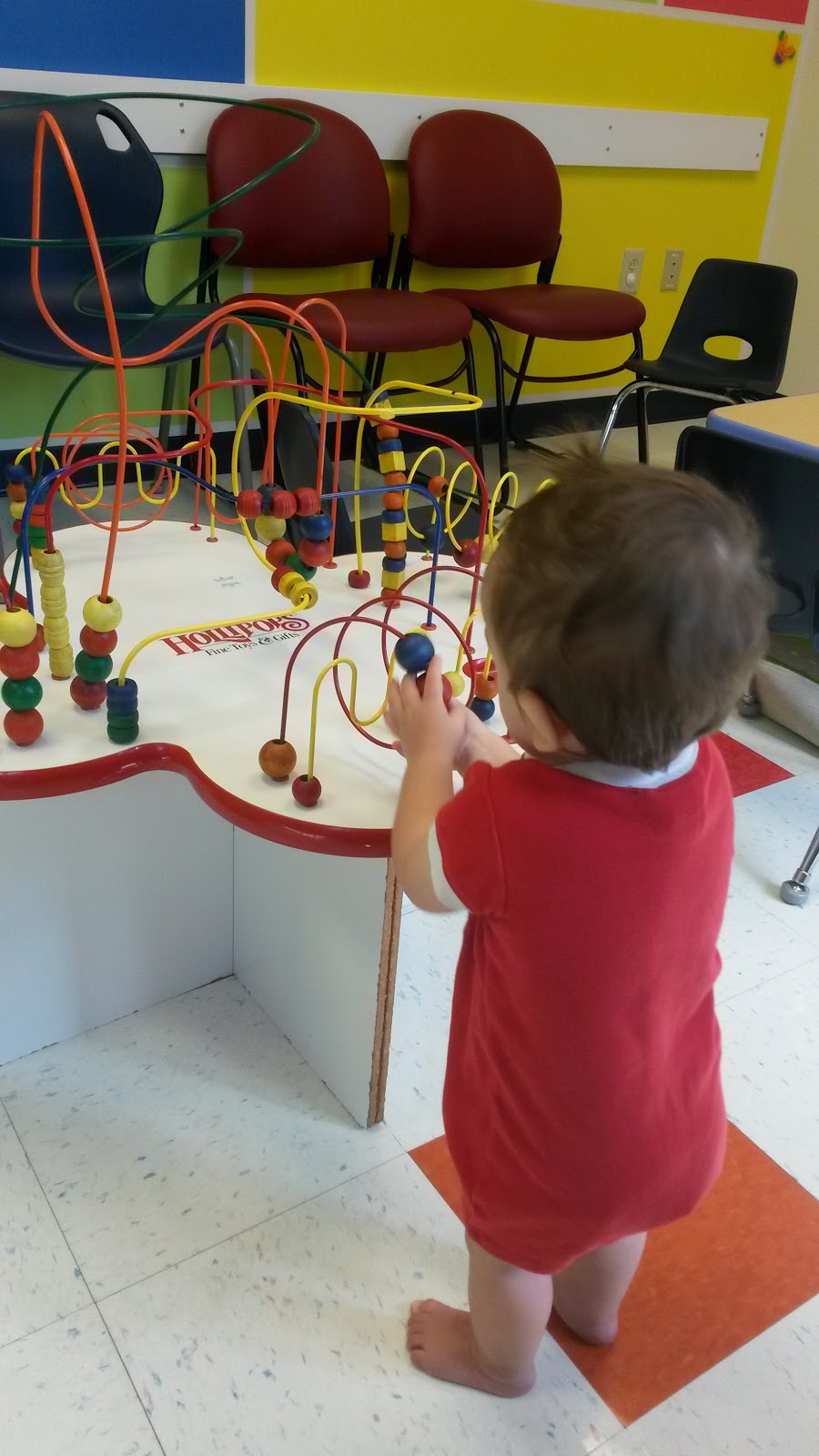 Yes, I realize my kid is not wearing shoes. I guess I should look in to getting him a pair.

We got back to the exam room  and his nurse commented that she couldn't believe that he is already a year old. No kidding, lady!  She remembered him from his first couple weeks when we were bringing him in for the heel sticks every couple days due to his jaundice.  She commented on how tiny he was back then and honestly I can hardly remember how small he was. I'm so used to seeing him the size he is now.

First up was getting his temperature and pulse ox and amazingly he cooperated.  Then I stripped him down and we went and got his weight (little wiggle worm did not want to sit still on the scale) and then measured his length and head. His measurements were as follows:

(For comparison, Andrew was 22 lbs 8 oz and 30.5 inches at one year, so compared to him Elliot is my peanut)

So in a month he only gained two ounces.  I'm trying not to stress out about it. I worry a little bit about not getting him enough calcium since I can't give him whole milk or yogurt or cheese (we go back to the allergist in a few weeks).

When Dr. Graham came in I asked him if I should be concerned about the drop in his percentiles and he assured me that it's perfectly normal at this stage since the kids get more active and they tend be more distracted when it comes to eating.  When Elliot wants to eat he can pack it away - the kid loves meat.  He has also eaten 3/4 of my oatmeal on more than one occasion and stuffs blueberries in his mouth like there's no tomorrow.  So I know he's capable of eating the foods that I'm feeding him, he's just moody and picky half the time.

While we were sitting there talking Elliot was munching on Cheerios and I was giving him sips of soy milk (introduced for the first time on Monday).  He'll take the soy milk in a sippy, but won't take breastmilk from a sippy. That's fine since I want to get him on the sippy full time and my plan is to stop pumping at work soon.  Dr. Graham was very pleased with his progress and said he is perfect.  After he left the nurse came in to do the dirty work of the shots. He got three and he handled it like a rock star. He cried less than 10 seconds and was back to his happy self before we even walked out the exam room door.

All in all it was a great appointment.  Elliot looks perfect, he's growing fine, his ears look clear and he is my awesome little guy.  Next up is an appointment with the allergist in September and we'll go back to the pedi in November for his 15 month well check.  Maybe he'll have gained some ground on Andrew by that point.