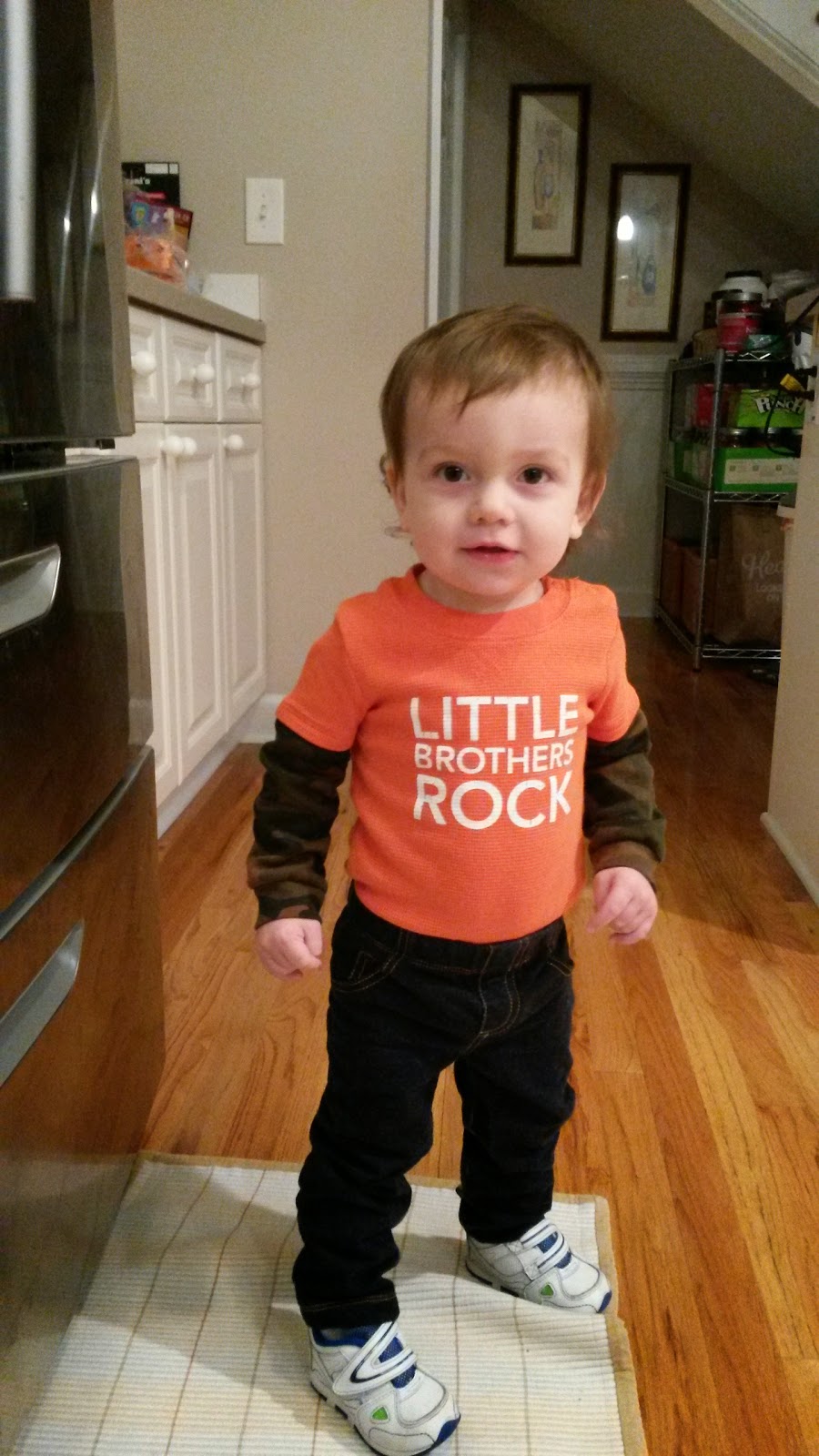 This past Saturday was the big race - the 5th Annual Charleston Half Marathon. The race that I had been training for since October and one of the reasons I haven't been blogging much.

Anyway, I woke up bright and early Saturday morning so I could eat some oatmeal and a banana to give myself some fuel for the race.  The weather looked pretty good for the race so I hurried up and nursed Elliot so I could get dressed.  There was time for a quick selfie before we headed out the door: 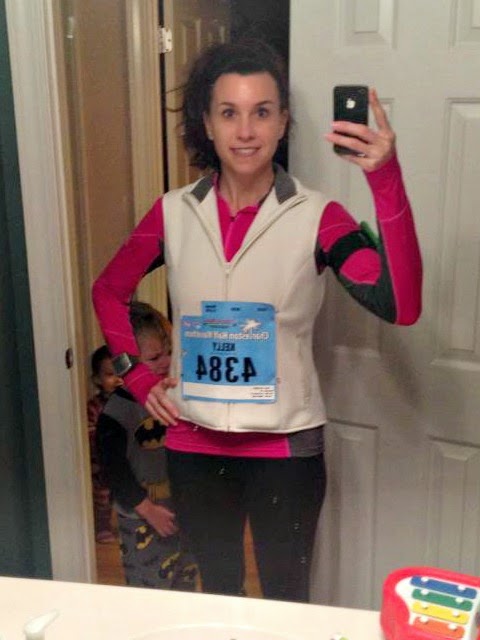 You can see Andrew crying behind me - he wasn't thrilled about being woken up and told he had to get in the car. Elliot didn't care.

We all hopped in the car and drove downtown so they could drop me off.  It was 7:45 so I had time to run into the school to go the bathroom really quickly before the gun went off at 8:00.  I made my way to the start line, got my Garmin ready and waited  for the signal.  The first mile was the typical mile of zig zagging through people and trying to find my stride.  We made our way down towards the Battery and I settled in to a good 8:30/mile pace.  The second mile was more zig zagging and running around cars - you'd think they would tell people not to park on the street when there is a race, especially on the narrow streets downtown.

Soon we were headed up King Street. I was feeling pretty good and had my average pace at 8:28.  There was a girl running about 5 yards in front of me at the same pace, so I was concentrating on keeping up with her.  That's when we ran past the 5 mile marker and I noticed that the measurements were off.  The course said 5 miles, but my Garmin showed 5.28.  I was thinking maybe that one was off and didn't think too much of it.  That is, until we ran past the 6 mile mark and I showed 6.28. What the hell?  I tried not to think much of it since I was keeping my pace right around 8:28 and was still feeling good.  By 9 miles I was starting to feel a little bit of fatigue, but I was still on pace.  Everything was great until 9.6 miles when there was a hill. Not cool.

At 10 miles is where the course split for the half marathon and the full marathon. I was thinking "Ok, only a 5K left.", but nope - according to the mile markers it was 3.4 to go.  I was still feeling relatively good, until we hit 11 miles.  That was when I hit a huge wall.  I was tired from not sleeping well the night before and I really just wanted to close my eyes.

We ran through North Charleston Riverfront Park and I was starting to struggle a little bit.  Pretty soon some big guy started running right next to me. I thought it was a little weird, but I was too worn out to care.  We were running side by side as we passed the 12 mile mark. He saw me glance at my watch and asked if I showed an extra quarter mile, too.

So at that point we had another 1.1 miles to go and it couldn't go by fast enough.  I made it past the 13.1 mark and was tempted to stop my Garmin, but I kept going.  When I rounded the corner getting near the home stretch I spotted my cheering section.  Jonathan had the boys in the stroller and I could see Elliot clapping.  That gave me the extra push I needed to make it the last 0.1 mile and get to the finish line.

As soon as I crossed the finish line I stopped my Garmin: 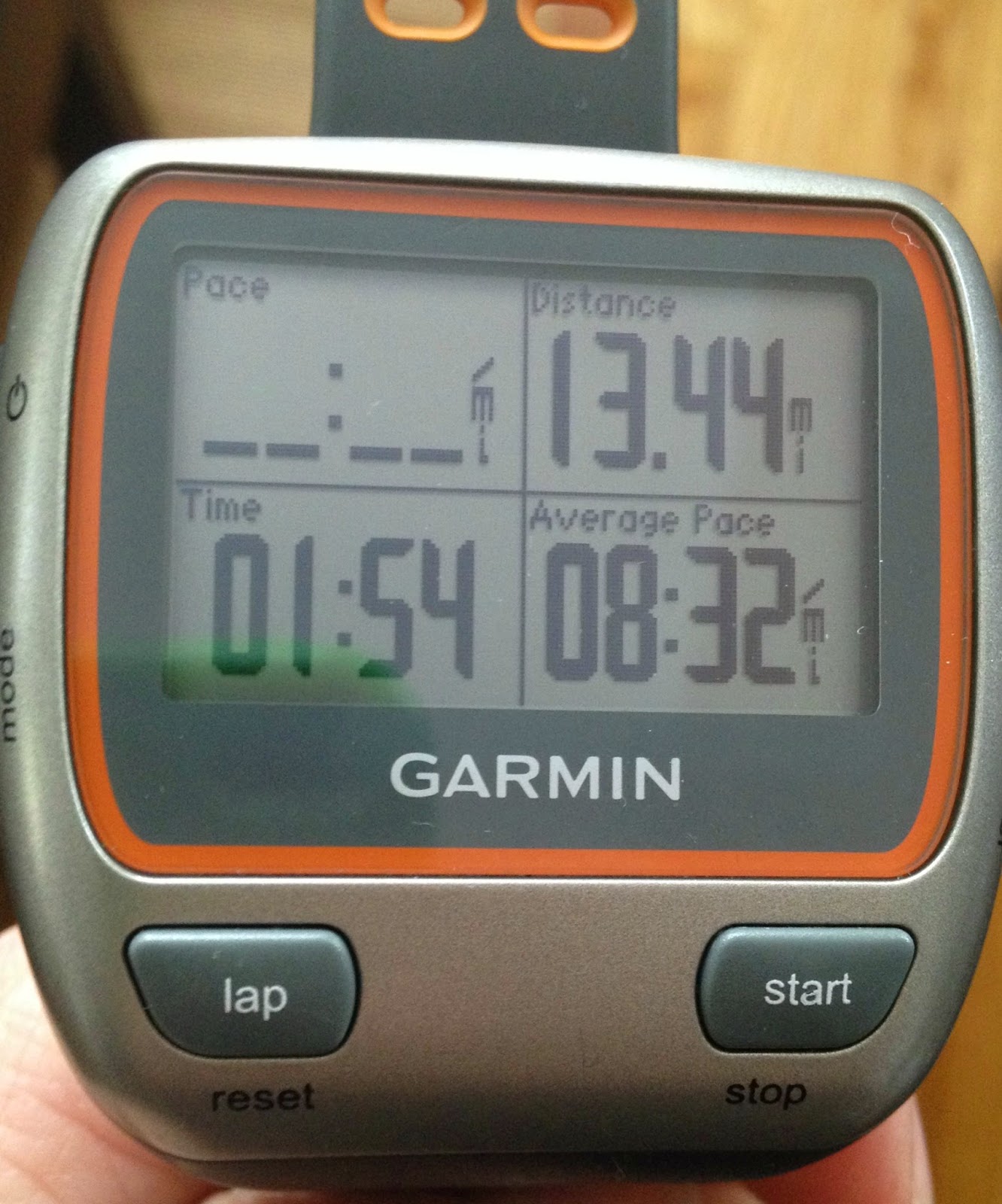 My previous best time for a half marathon was Kiawah in 2009 when I got a 1:55:52.  So even with the extra distance added on it looked like I would have a personal best.

I walked down the chute and got my medal. As soon as I did I took off the vest I was wearing that I really didn't need since it was kind of warm.  I grabbed some gatorade and as soon as I turned around I spotted my friend, Karen, and her husband Sean. 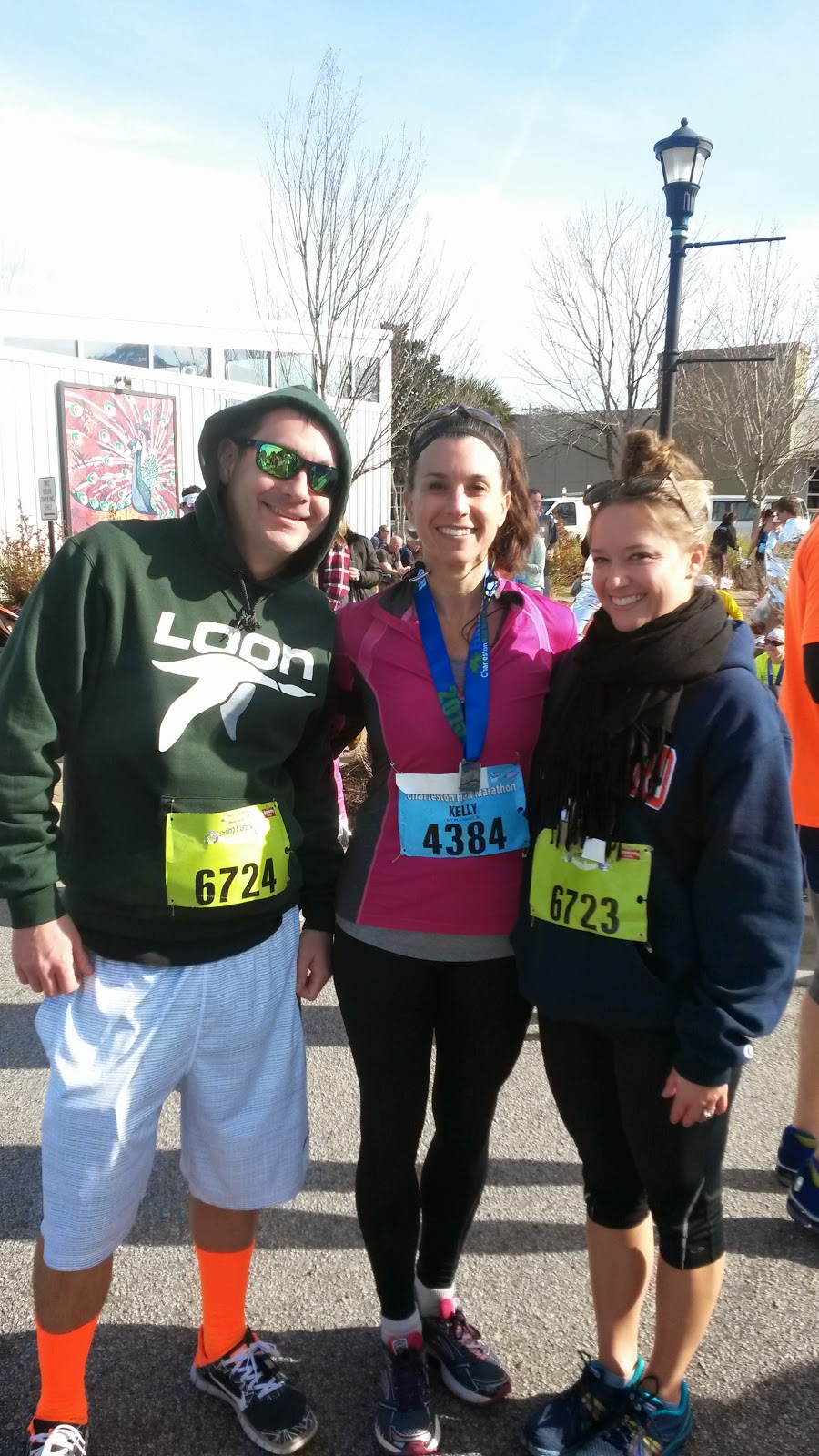 They had run the 5K and had been waiting around for over an hour so they were a little chilly. I was still sweating, though.  I stood there chatting with them and I made a comment about the extra distance.  Another runner that was standing nearby overheard us and said "Oh good, so it wasn't just me!".

Within a few minutes I saw Jonathan and the boys cutting through the crowd.  I was excited to have my little cheering section, even if they didn't seem overly pumped to be there: 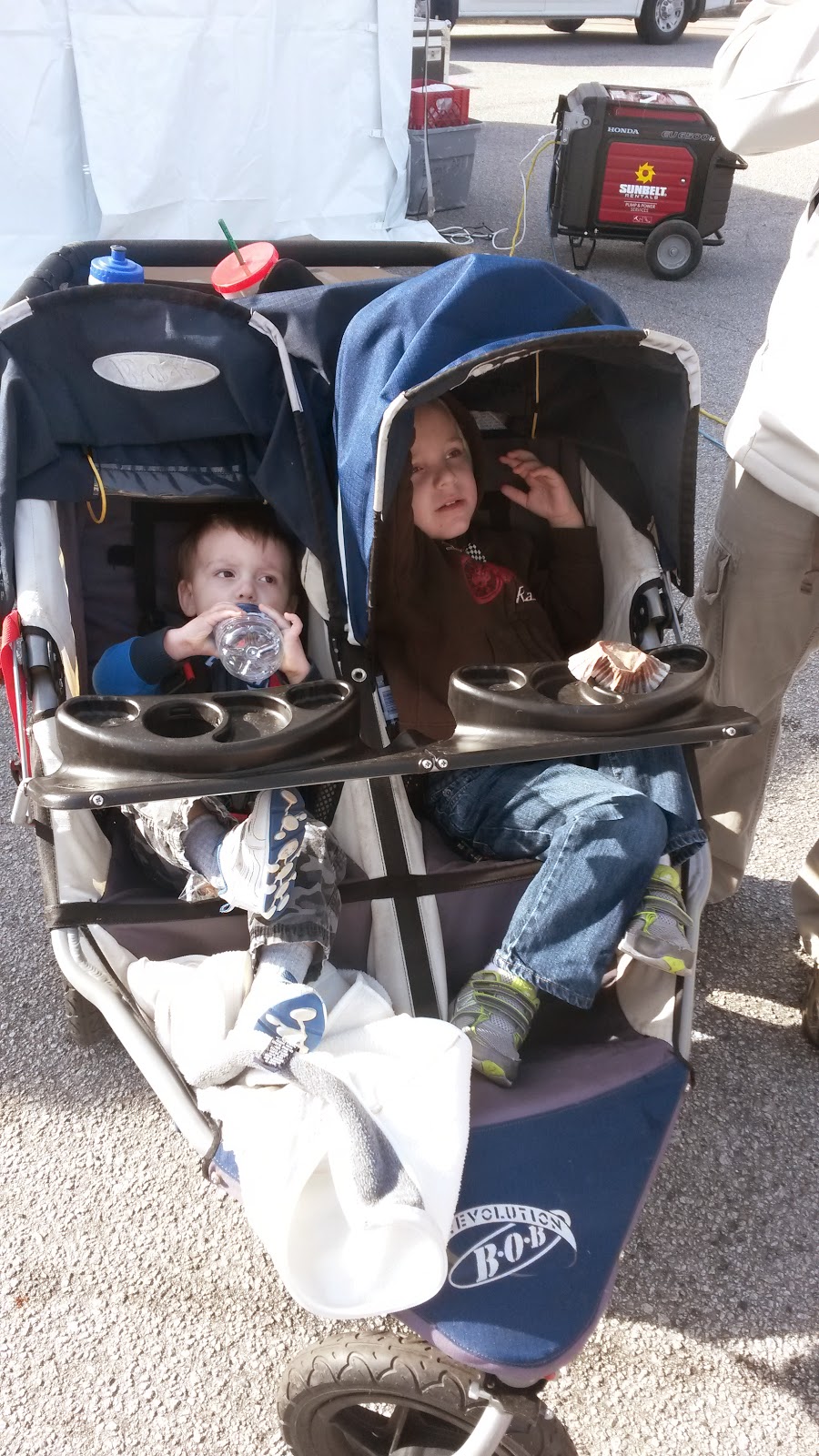 Jonathan was at least smiling  :) 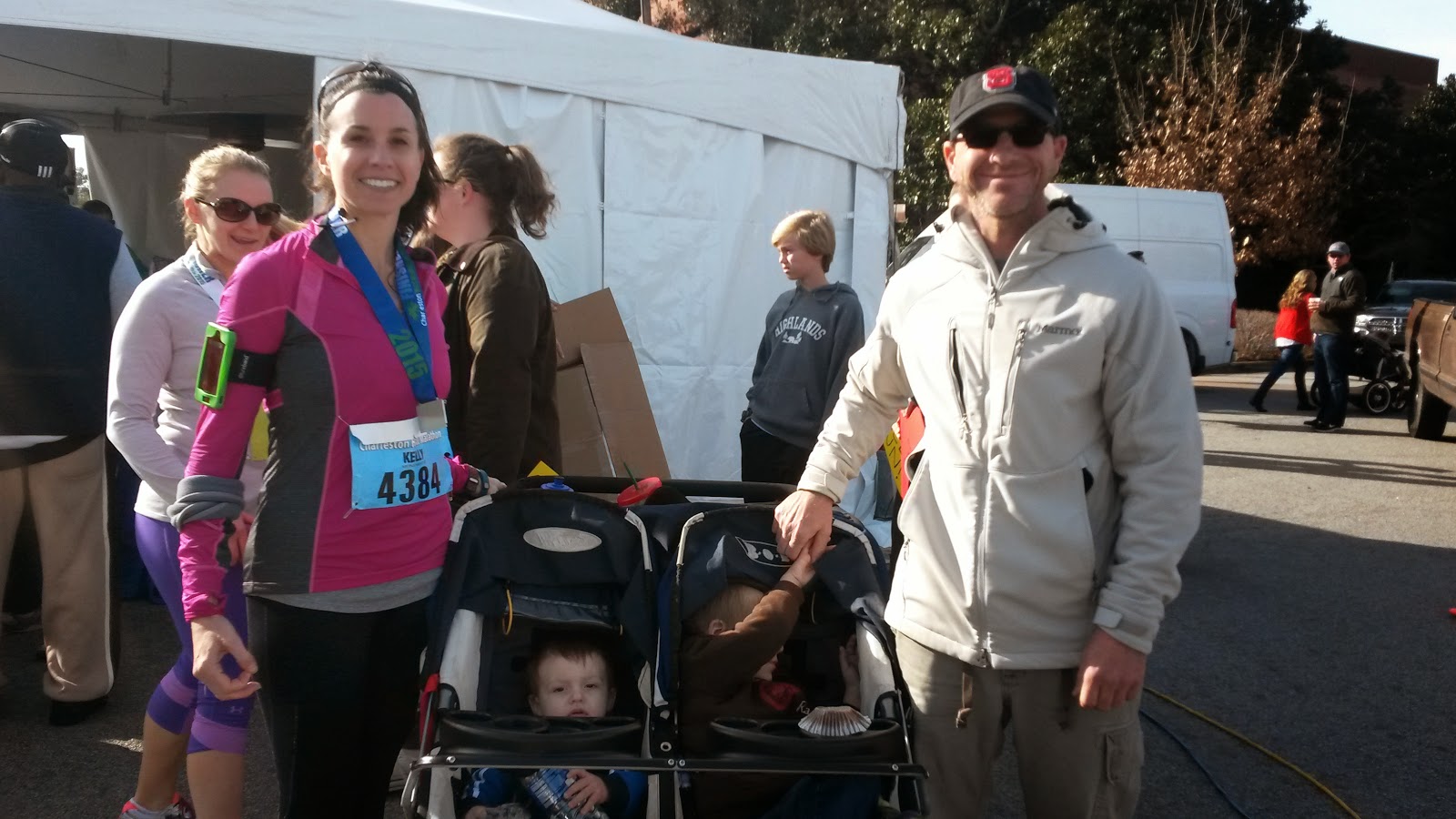 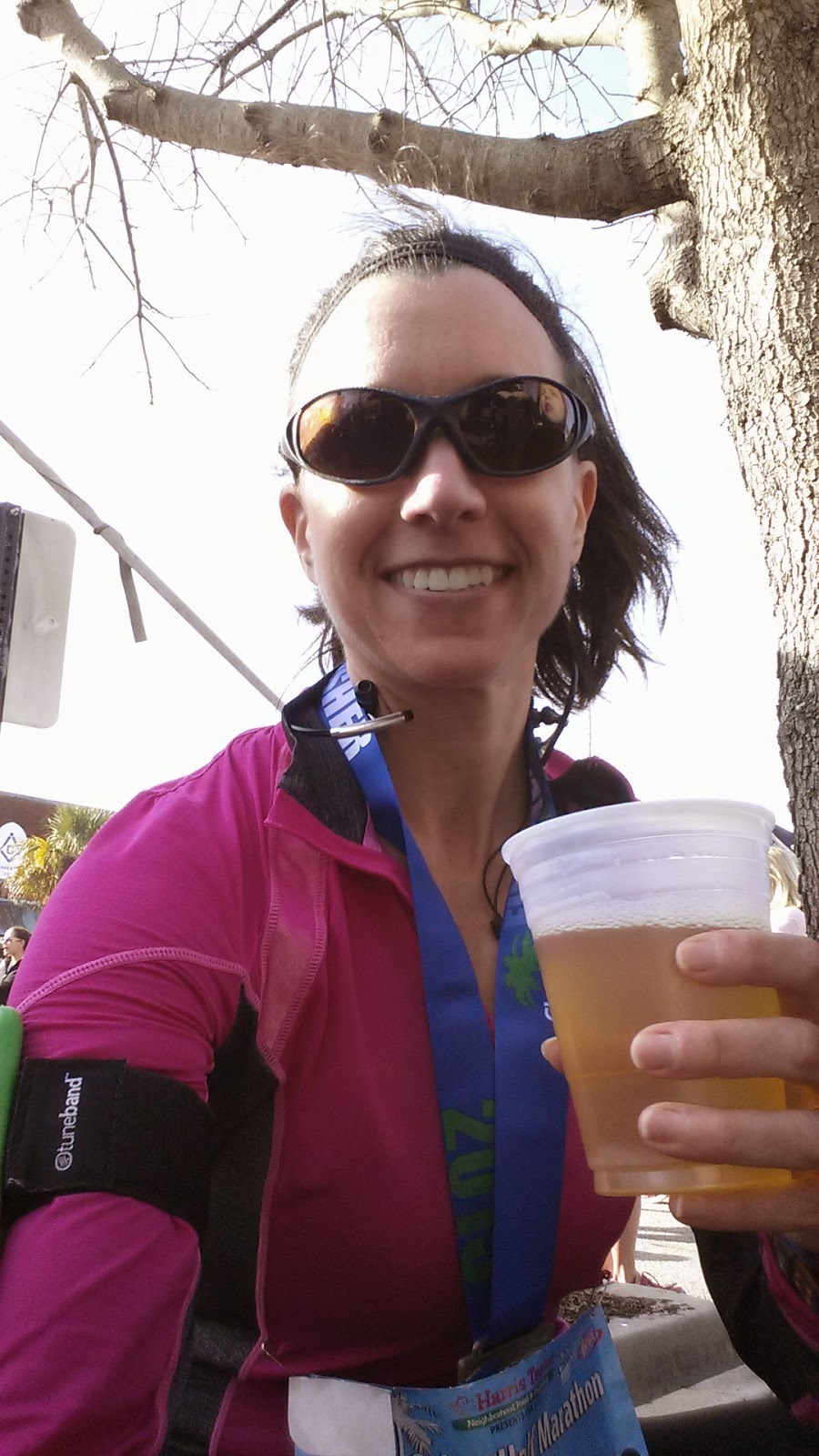 One more quick selfie with my little buddy and we were ready to head home so I could shower: 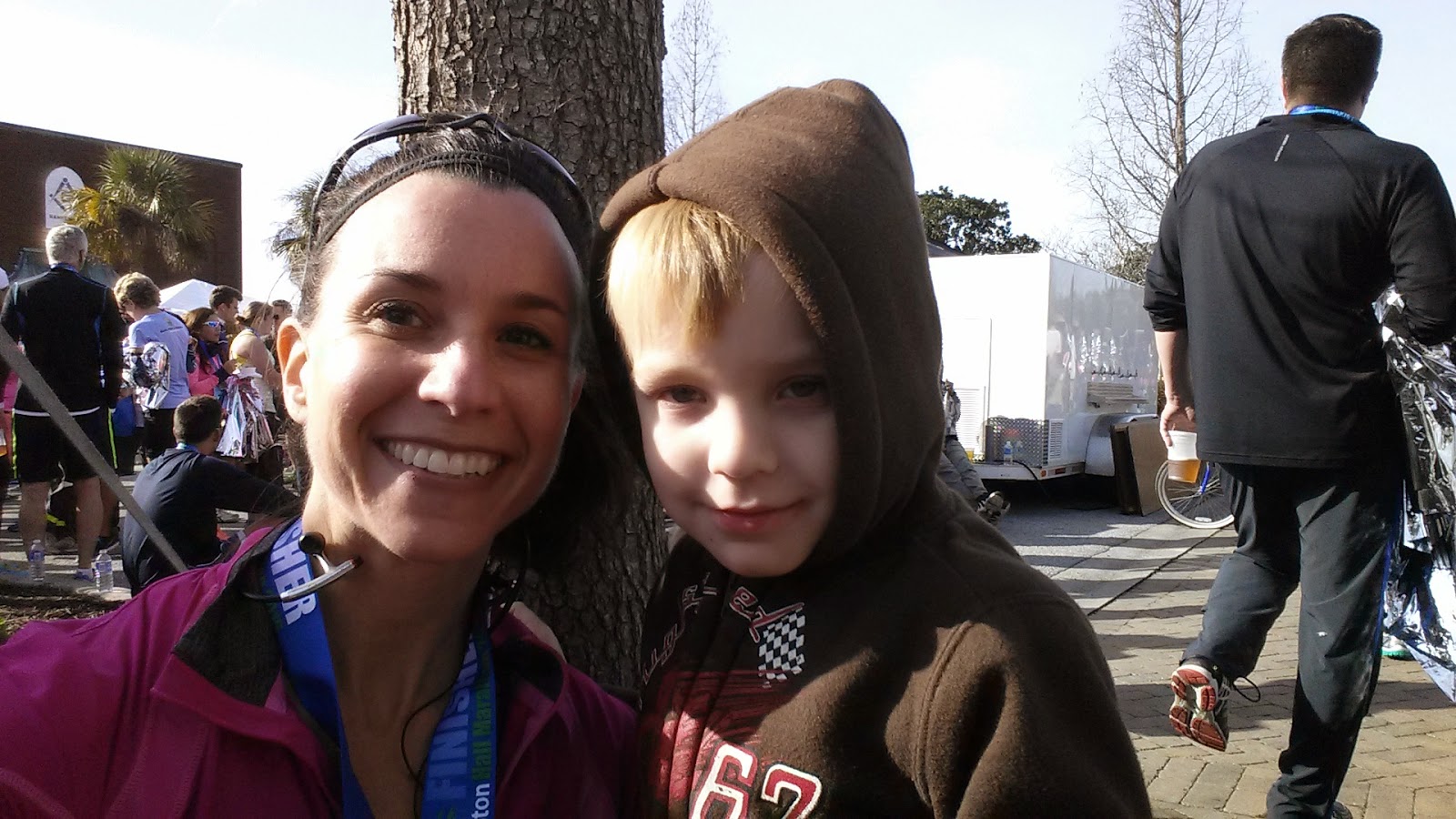 That night I checked the results and saw that they had me at 1:54:32.  That was still 1:20 faster than my previous best, but I was disappointed since I knew my time should be better.

On Sunday I checked the paper to see if they said anything about the race and I was pleased to see that they admitted the course was almost 0.3 miles longer than it should have been due to the lead car taking a wrong turn.  Their plan is to remeasure to find out exactly how  much longer it was and they will adjust everyone's times.  That's fine for me, but I wonder about the people that were trying to qualify for Boston and missed it by just a couple minutes since the adjusted time may not be accepted.

Either way, I considered it a successful race and I was pleasantly surprised by how good I felt after it was over.  Not too shabby for my first half marathon in over 5 years.