Last year we made it to the beach a grand total of one time.  That's pretty sad considering we live two miles from the ocean.  It always just seemed like such a hassle, especially since Elliot wasn't walking until almost September and the amount of crap that we figured we would need to lug out there was overwhelming.  So we only went once and it was by bicycle.

This year we are determined to get out there more. We figured we would start with the unofficial kickoff of summer (Memorial Day weekend).  We decided to go Sunday figuring that the crowds would probably be the smallest of the three days so it hopefully wouldn't be a mess. We got the boys up, fed them breakfast and got them dressed and sunscreened up so we could be out the door at 9:45.  As I was packing up all the crap we needed I couldn't help thinking about how different a beach trip is now compared to five summers ago. Preparing for the beach is no longer a 10 minute endeavor!

We got out to Sullivan's Island and found a parking spot down by Station 18.  Andrew was so excited about going to the beach and couldn't wait to get out there. We unloaded the wagon from the back of my car and plopped both boys in there along with the beach toys we brought along.  Jonathan pulled them and carried his chair and bag while I carried my chair and bag and pulled the rolling cooler with the tent and the boys bag balanced on top. We made it halfway down the boardwalk before I had to rearrange and carry the tent and put my bag on the cooler.  When we got out to the beach we saw that there wasn't really all that much beach. I thought the tide was in, but I think it's just the way that section of the beach is normally.  There is no tide pool like there is down around Station 25 (the perfect place for little kids to play).  We decided not to set the tent up yet, but wait to see if we needed it.  Andrew wanted to head straight for the water, but I had to get Elliot in his swim stuff first.  Little dude is swimming in his 18 month swim trunks and 2T rashguard: 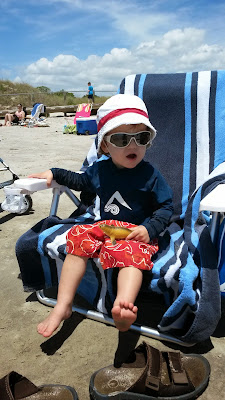 He wasn't too keen on the water - I think because when Andrea took him to the beach he got knocked down by a wave. He was much more content to sit and play in the sand: 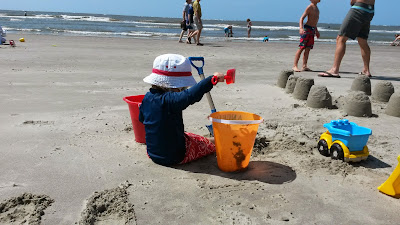 Andrew wanted to play in the water, though. Thankfully Jonathan obliged since the water was a little nippy: 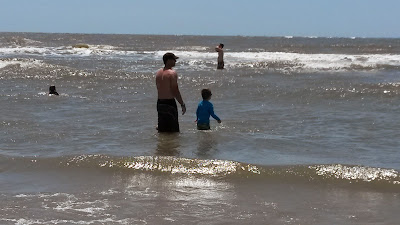 Some friends and their kids joined us and it was perfect for keeping the boys entertained: 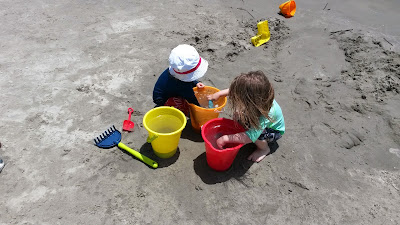 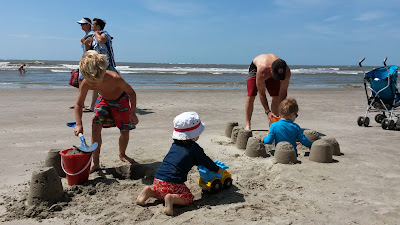 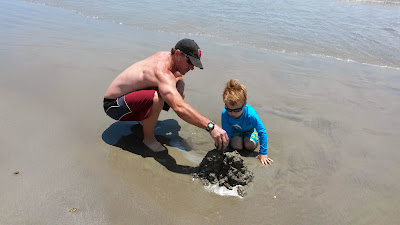 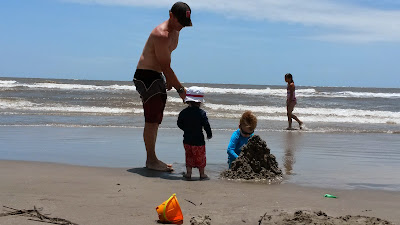 Finally after over 3.5 hours it was time to head home so Elliot could take a nap.  Andrew was pooped from all the running around and playing and fell asleep in the wagon on the way back to the car: 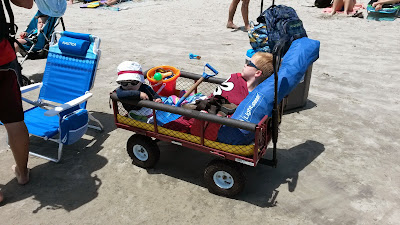 Of course Elliot fell asleep during the short ride home, but luckily I was able to get him cleaned up and down for a real nap with no issues. The little dude was tuckered from all of the playing and took a 3 hour nap.

I'm so glad it was a successful trip and wasn't full of meltdowns and screaming. Hopefully that means we make a lot more of them this summer.  Next up is a possible boat outing this weekend. I'm not as optimistic about that, but we'll see how it goes.

How I Knew We Are Definitely Done

After Elliot was born we said we were done. Two kids was all we could handle.  And to be honest, the thought of three boys gives me anxiety.

After Elliot turned one, though, I started having doubts. Especially when seeing more and  more pregnancy announcements from friends and even more so when seeing so many of them adding the opposite sex sibling to their families. I started to wonder if maybe we shouldn't be done. Maybe we should consider adding #3 to our family and maybe getting the baby girl that I know Jonathan would love to have.

I had been feeling kind of crappy for a few days.  I'd been having horrible workouts and had been completely nauseated two evenings in a row.  While we were out back pushing the boys on the swings I said something about how I felt so crappy. Jonathan jokingly said "You aren't pregnant, are you?".  I pointed out that I have an IUD and he mentioned that one of his riding buddies ended up with a kid even though his wife has one.

I instantly felt a little panic rise in my chest.  I knew I had a pregnancy test up in the bathroom and decided to take it the next morning just to rule it out.  When I woke up on Friday I fumbled the package open and nervously took it.  The whole time I was waiting for the answer to pop up I felt this sense of dread.  I wasn't anxiously staring at it praying to see a positive, I was thinking "WTF do we do if it's positive?"

After I figured enough time had elapsed I started to glance at it and said a silent prayer that it would be negative.  I have never been so happy to see these two words: 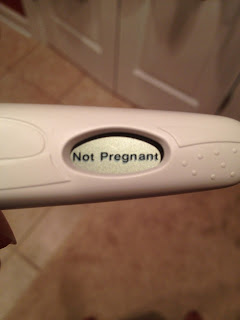 I didn't feel any sadness about seeing a negative. Instead I felt an enormous sense of relief. That's when I knew. We're done.

Don't get me wrong - I love little babies and I do miss mine being so small and snuggly. Looking back at at their newborn pictures does make me nostalgic, but what it doesn't do it make me want to start over.

Maybe it's because things are starting to get a tiny bit easier.  Elliot is getting slightly more independent so I can actually breathe.  Maybe it's because Elliot is such a handful that I can't imagine keeping an eye on him while dealing with a newborn. I know it's definitely because I'm finally seeing the light at the end of the tunnel with daycare expenses.  Andrew has his interview with the school next week to possibly get him into the 4 year old kindergarten and I'm getting my hopes up that he'll get in and we'll start saving $1K+ per month.  Once we move Elliot to Discovery Center we'll be paying a little more than we are now, but Andrew should be in school by that point so it won't be too bad.  I'll also have my car paid of by that point, which will be another huge savings. As it stands right now between daycare and  my car we are shelling out over $30K per year. That is ridiculous.  But I can see the end and once we're there we will be getting a big-ass raise. So that's a huge reason that the idea of starting over from square one made me feel physically ill.

I have a sneaking suspicion that Jonathan would not mind an 'oops' baby based on some comments he's made, but I'm not going for it. As far as I'm concerned we are DONE.    Seeing some pregnancy announcements over the last few days hasn't made me feel any sadness or jealousy, either.  After my little scare I now only feel happiness for my friends.

So there you have it - the Walker family is perfectly complete as a family of four.  And with these two cuties I'm feeling very good about that: 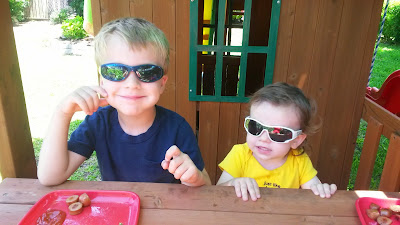