Wait, what now?  Elliot just had a birthday, how did another month already go by?  I guess that's what happens when you're busy raising two crazy boys. 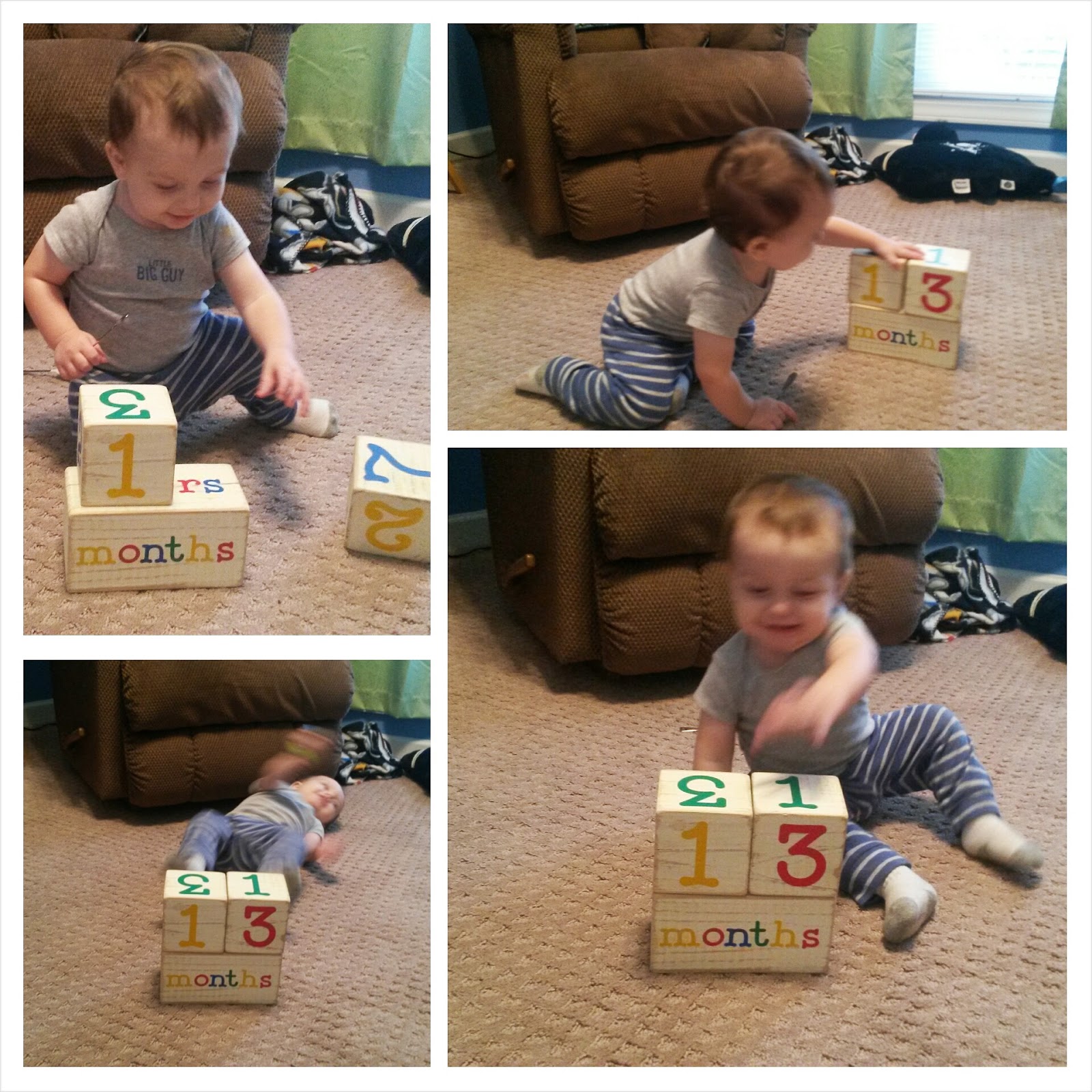 Size: At his appointment at the allergy doctor two weeks ago he was just over 20 lbs and I don't trust their length measurement of 31" because I saw how inaccurate it was.

Wearing Size three diapers still and I assume he'll be in them for a while. He's pretty much in all 12 month stuff although I did put him in a 9 month outfit today and it fit just fine.  He's definitely a little smaller than Andrew was at this age.  That's ok with me - I want him to remain my little guy  :)

Milestones:  Walking all over the place.  He took his first couple unassisted steps on August 23rd, which is very funny because Andrew had also taken his first steps on August 23rd (2012), which also happens to be my sister's birthday.  He has 8 teeth now (front four on top and bottom) and at least one molar is on it's way. I can't get a good look in there, but I can feel the bump.  Elliot is getting very methodical with toys and is obsessed with putting things in boxes, cups, drawers and his clothes hamper.

Eating: He's still nursing in the morning and evening (and throughout the day on the weekends), but has started drinking more of the almond milk lately. I'm still pumping at work, but I may start phasing that out in the near future.  Some days he does great with eating table foods and other days not so much. He loves oatmeal, blueberries, grapes, french toast, mashed potatoes, grilled chicken, goldfish crackers, cheerios, and fruit pouches.  We heard back from the allergy doctor the other day and he is still showing a reaction to milk protein (which I knew) and showed a slight reaction to peanuts.  We were advised to avoid those things entirely for the next 6 months until we have his follow-up. I know he's had bits of peanut butter over the last few months and hasn't shown a reaction. Hopefully he will grow out of that one because I'd hate for him to not get to enjoy the awesomeness of peanut butter.

Sleep: He's sleeping around 10.5 hours at night. Occasionally he will get up in the middle of the night, but that's rare.  Unfortunately the kid does NOT like to sleep in like his big brother.  Andrew will sleep until 9:00 on most weekends and we have to drag him out of bed in the mornings for school. Elliot rarely sleeps past 7:00. I miss sleeping in...

Personality: He's an ornery little guy sometimes.  He is sweet and cuddly, but he is so busy exploring that he doesn't give me cuddles as often anymore.  He's in to EVERYTHING all the time. I swear you can't take your eyes off this kid for a second: 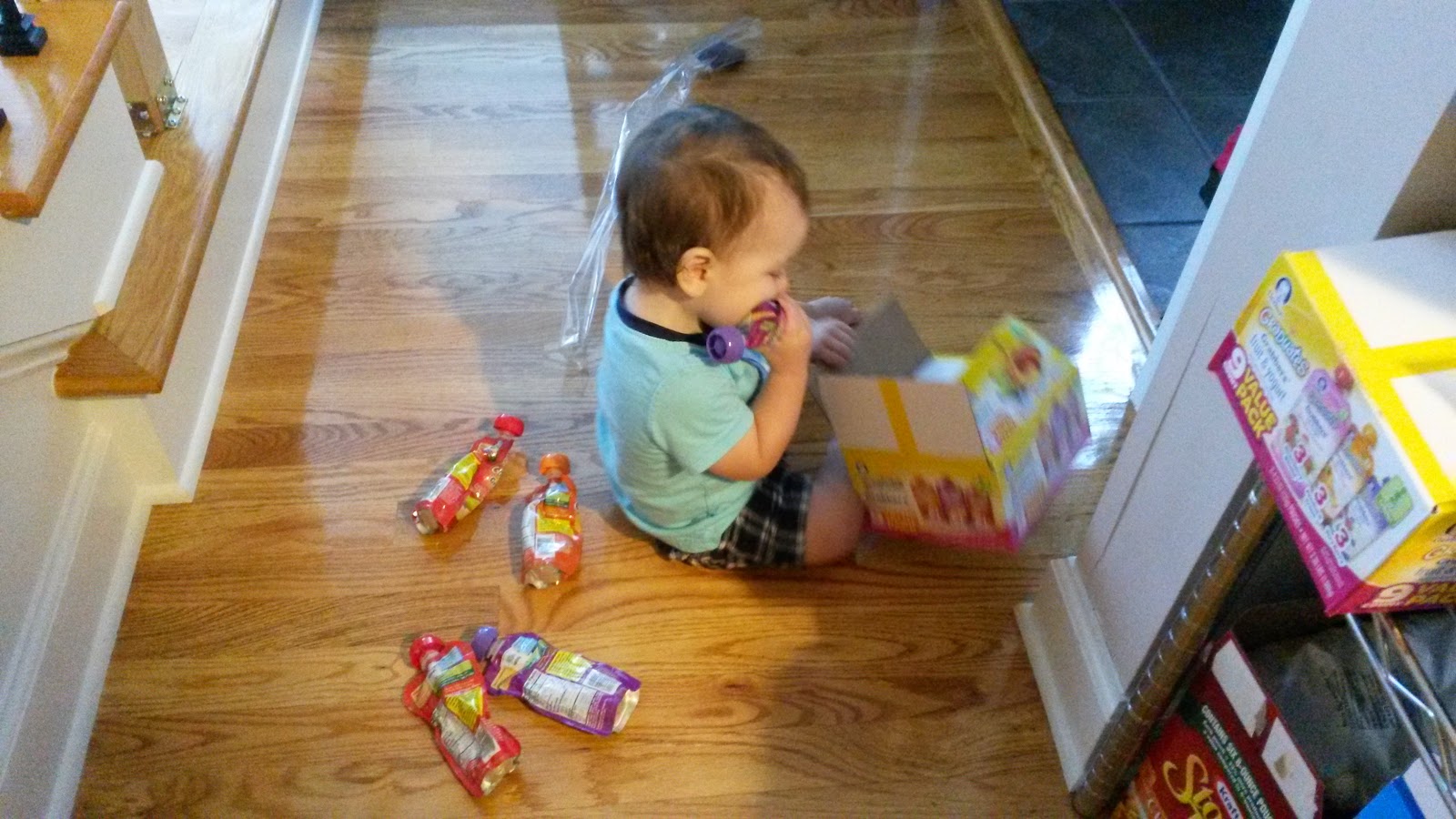 Loves: My drawers in the bathroom, his drawer of forks and spoons in the kitchen:

his big brother, any toys that he can push along the floor, and climbing everything in sight: 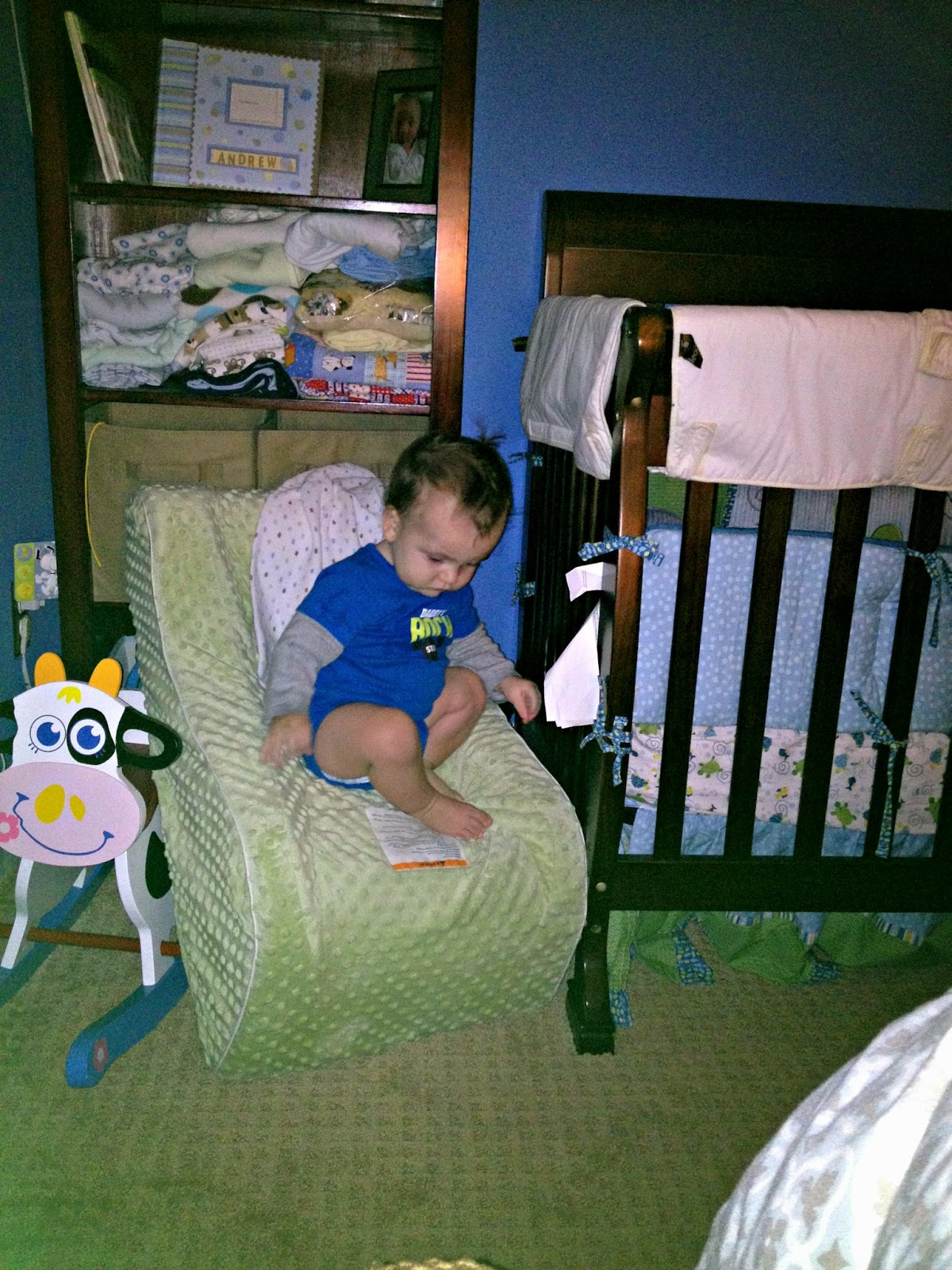 Hates: Getting his diaper changed, being restrained in his car seat and staying up past his bedtime.

I love that little guy more than I can put in to words.  He drives me insane sometimes, but when he sees me and his face lights up with that big goofy grin I forget all that.  He is my sweet little smoosh.

Round 2 at the Allergy Doctor

This afternoon we went back to the allergist to get Elliot retested. When we went in May they did the skin test for milk protein, soy, peanut and casein.  He had a strong positive reaction to the milk protein and a milk reaction with the casein.  A week or so later I gave him peanut butter and he broke out all over in hives even though he had tested negative with the scratch test.  He has had small amounts of peanut butter since then with no reaction, but I wanted to bring it up with Dr. Streck anyway.

We got there for his 2:30 appt and got checked in.  Thankfully this time we only waited maybe 5 minutes in the waiting room before getting called back. He got weighed at 20 lbs 13 oz (fully clothed and with what appeared to be a wet diaper) and she measured him, but from looking at how she measured him I knew it was way off.  Once she was done with that stuff we were left to wait for the doctor. Elliot busied himself climbing on stuff: 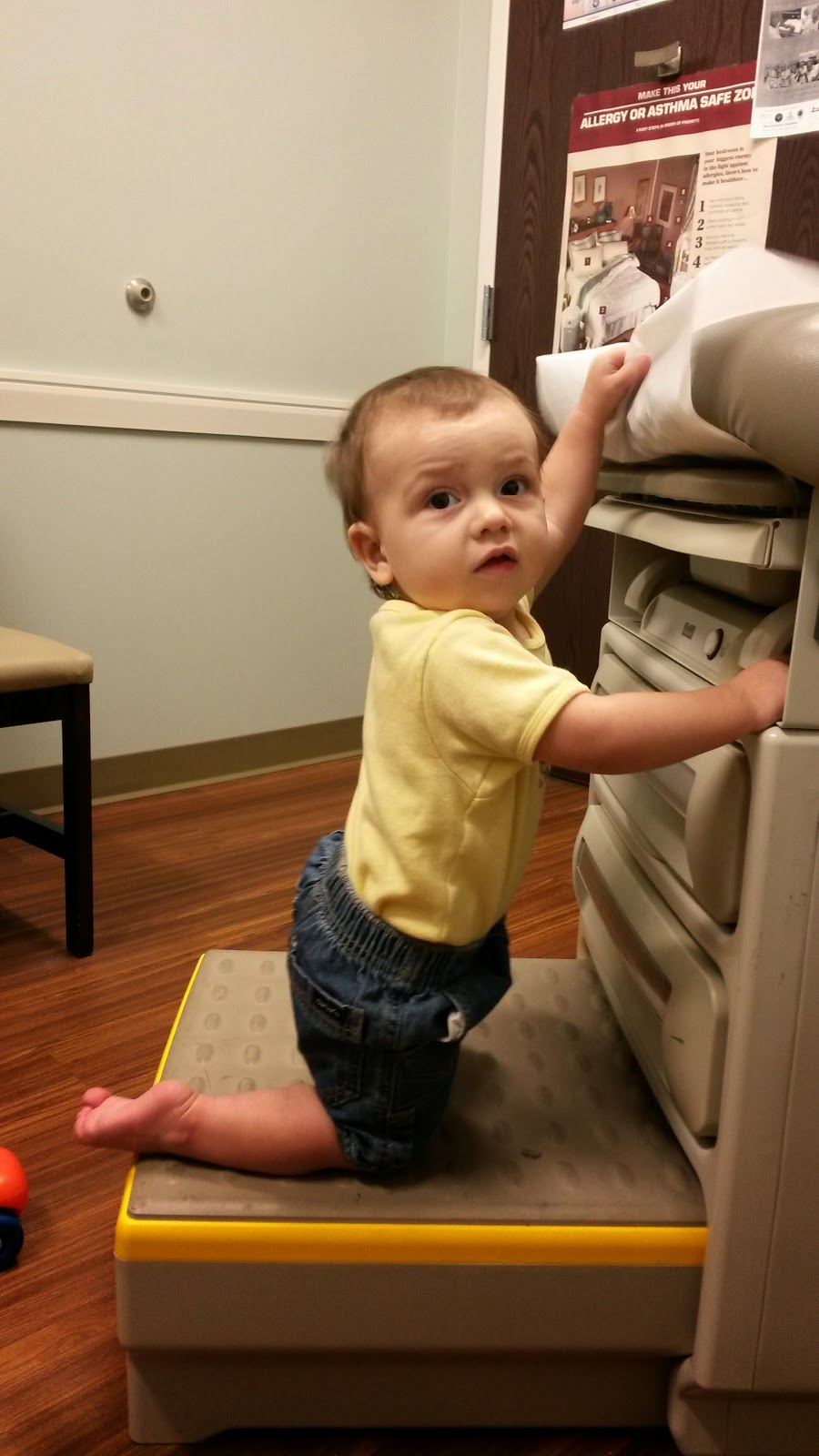 And pulling stuff out of and climbing in the toy basket: 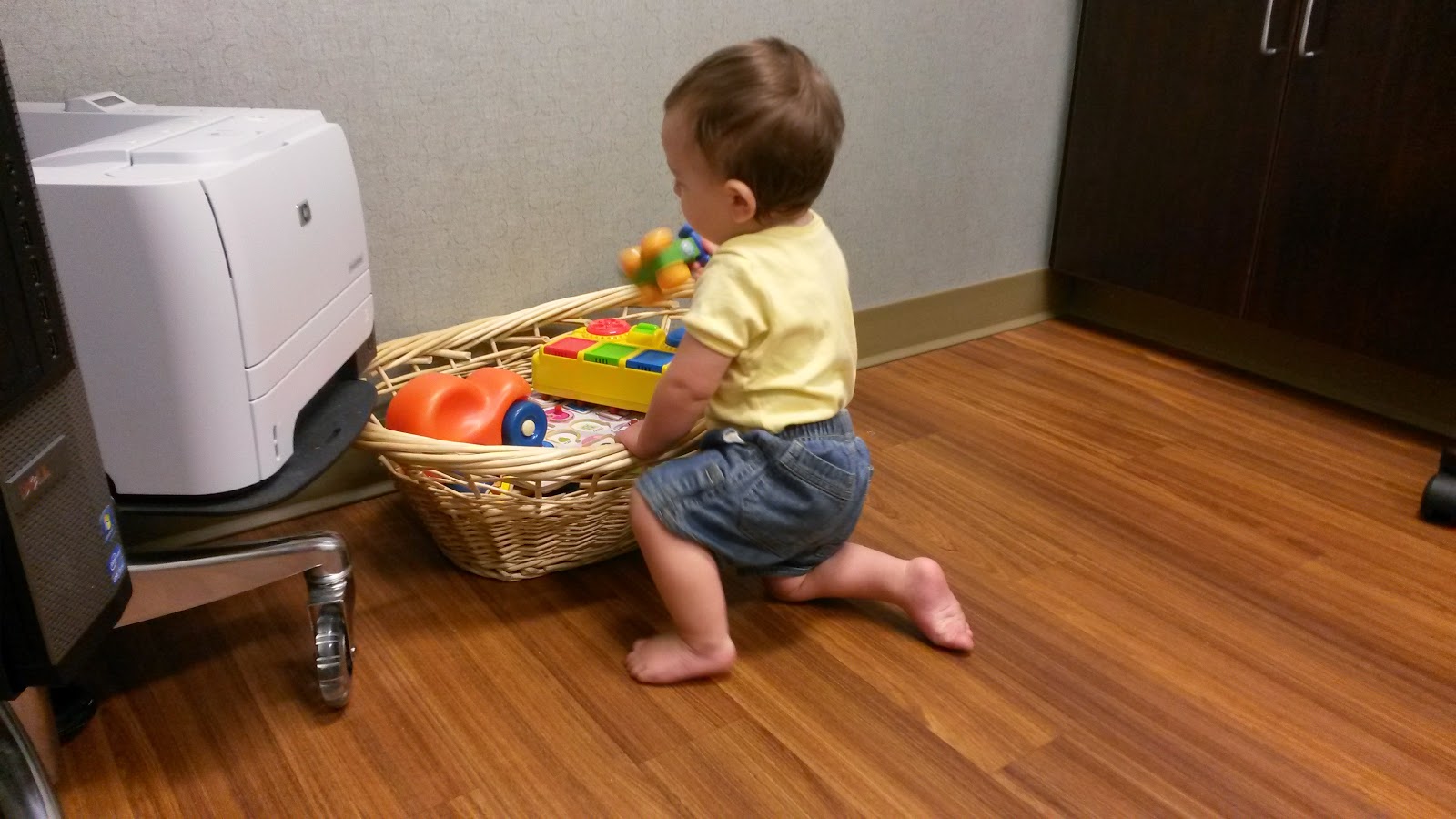 Again, thankfully the wait was short and Dr. Streck was in to see us.  She asked if we had been avoiding milk products altogether. I said that we have avoided milk, cheese and yogurt, but he had taken a drink of Andrew's milk a month or so ago and got some hives.  I told her about him reacting after having some peanut butter as well.  She was going to redo the skin test and also have the blood draw to check his levels, but since he had reacted somewhat recently to milk products she decided to forgo the skin test. It was a pretty safe bet it would be positive and she didn't want to subject him to two tests if it didn't seem necessary.

She sent in a prescription for some epi pens to have on hand just in case and put in the order for the blood work.  We headed out, making our appt for March to be rechecked in 6 months, and headed downstairs for the blood draw.  After some miscommunication about insurance and if they would cover the labs, we were back and waiting to have his blood drawn. Elliot totally charmed an older gentleman in the waiting room (he was probably early 80's) and soon we were called back.  I was anxious about how he would do with the blood draw, but he did awesome. He didn't even make a peep when they stuck him. The only fussing he did was because I had to hold his arms down and he hates to be restrained.  I was so proud of my little trooper.

It will take about a week to get the results, so hopefully by next weekend I will know how everything is looking. I'm sure his milk protein levels will be significant, but hopefully when we go back in March there will be a decrease. Until then we'll keep avoiding raw milk products and hope he grows out of this before too long.

The Saturday after Elliot's birthday we headed to our photographer to get his one year photo's done. He was nicely rested up from a 2.5 hour nap so I had high hopes that he was in a good mood and be full of smiles.  For most of it he sat there with a serious look on his face, but he did cooperate and give us a few smiles. 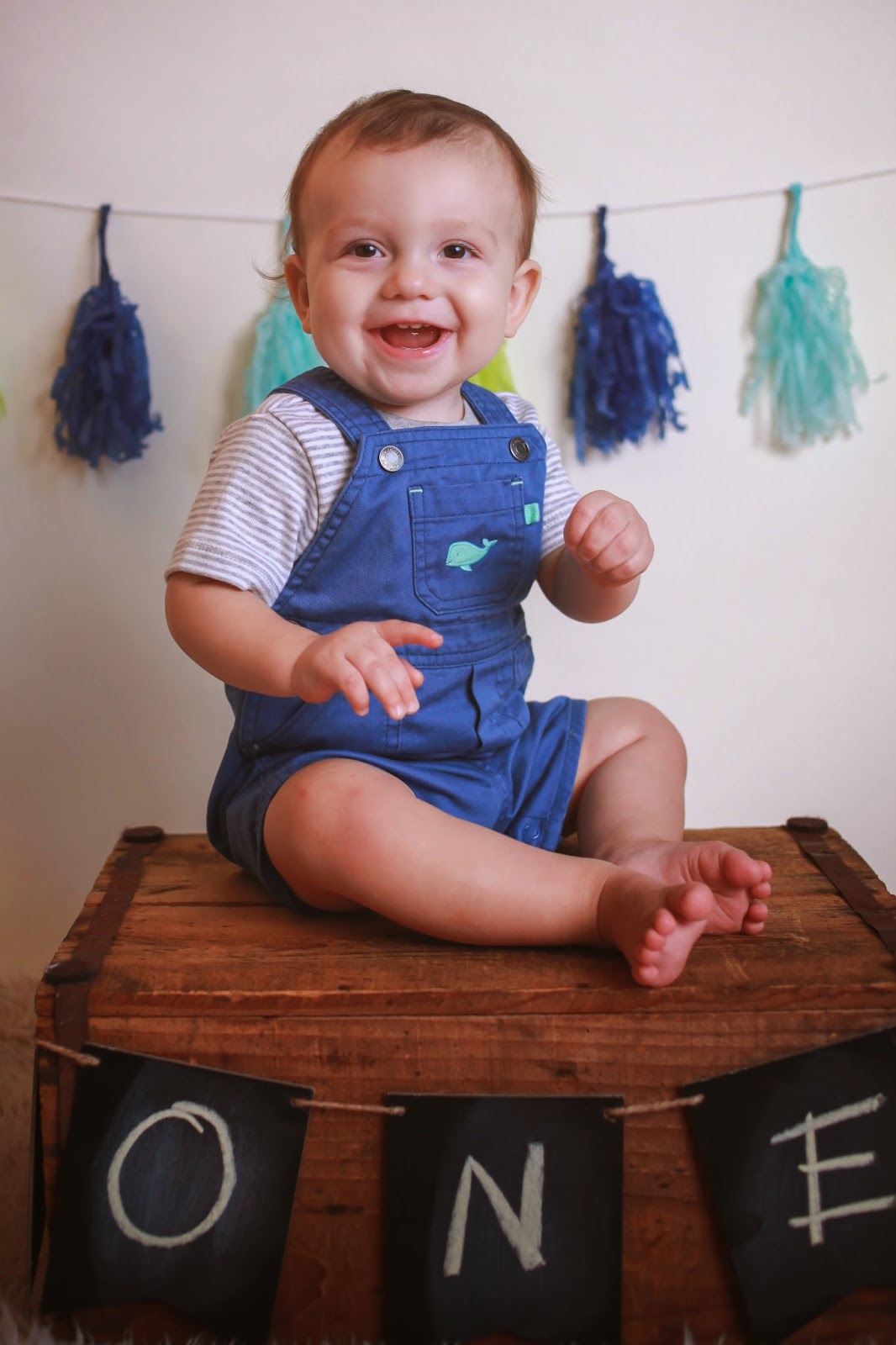 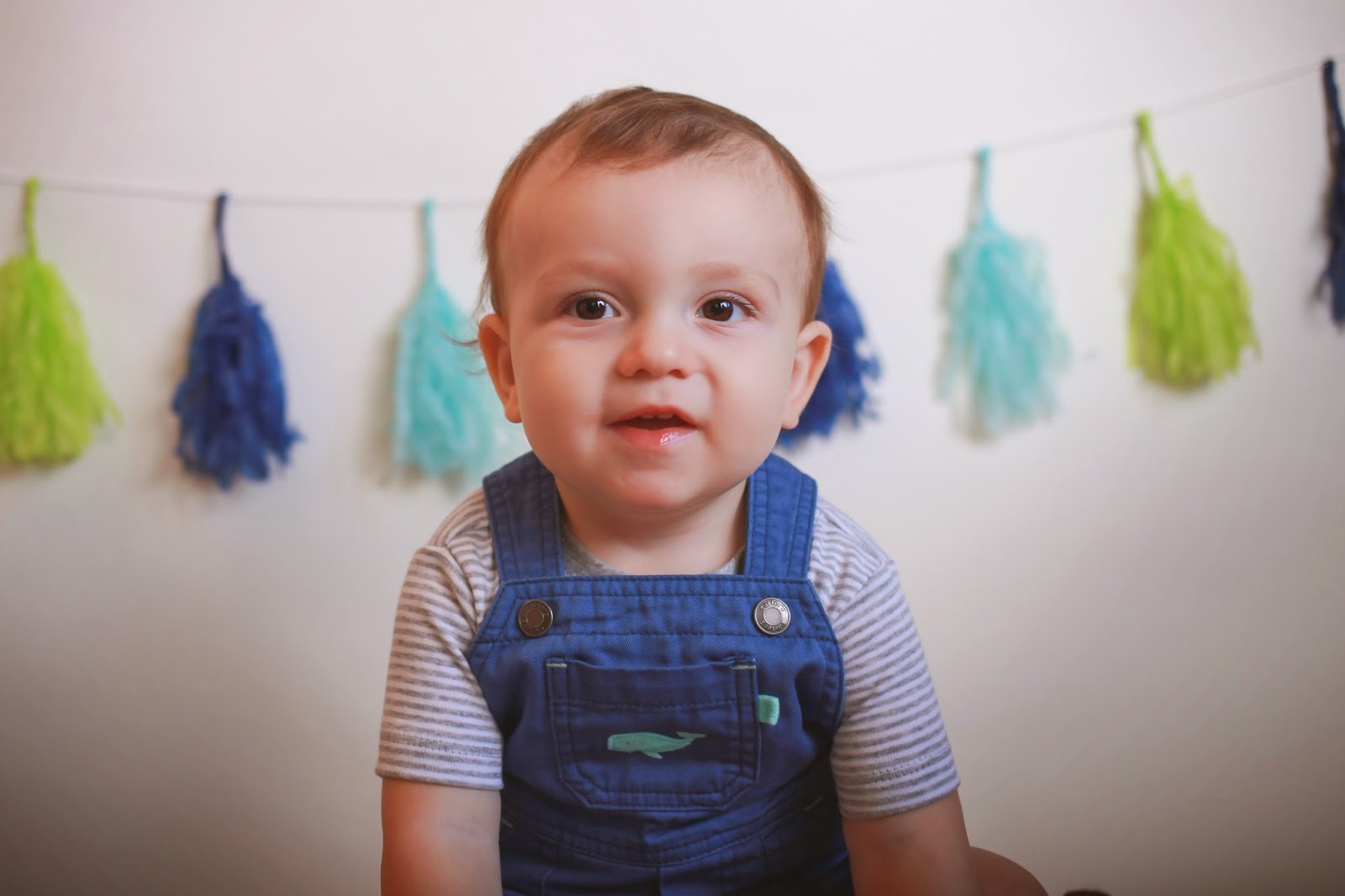 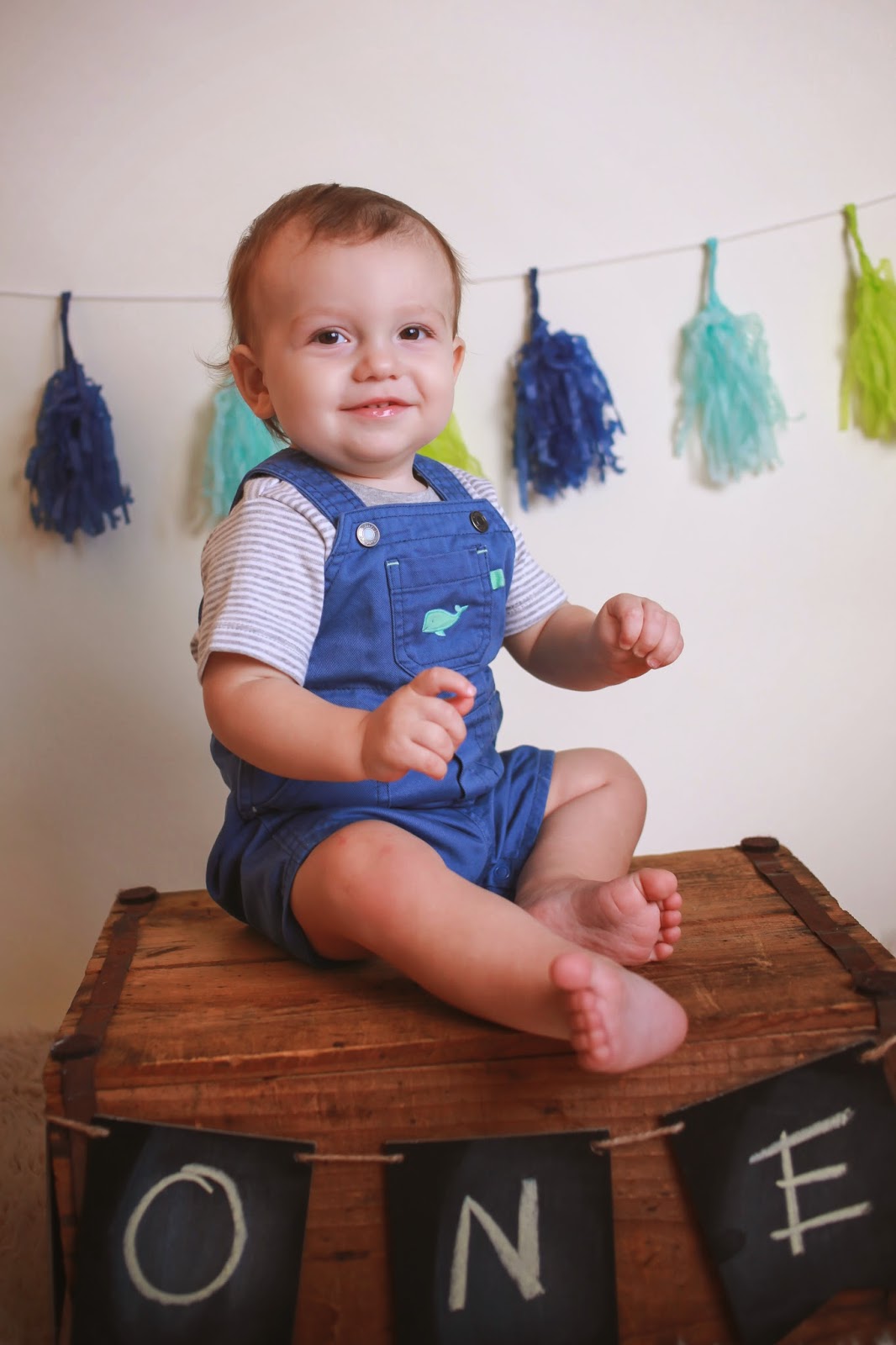 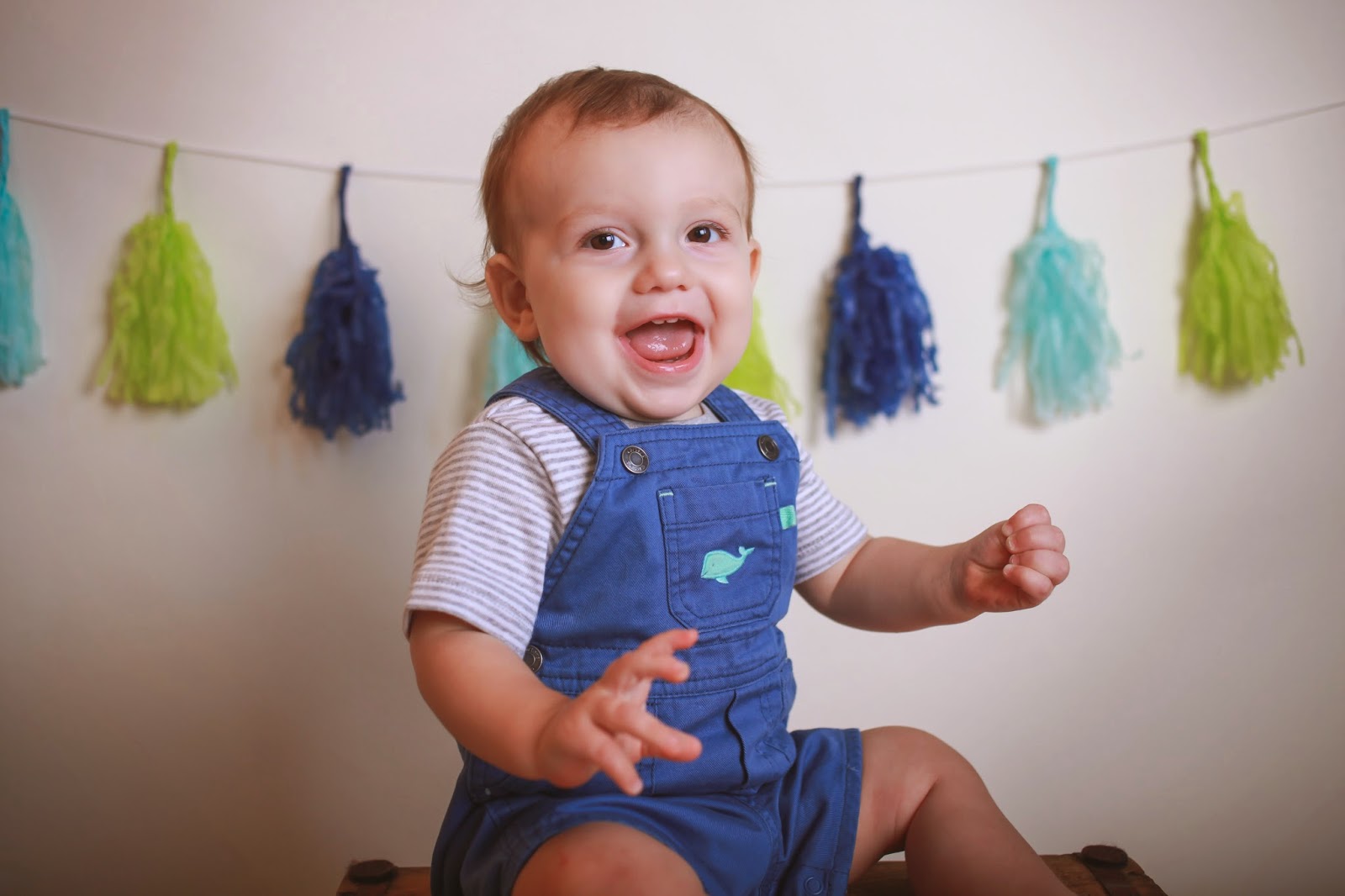 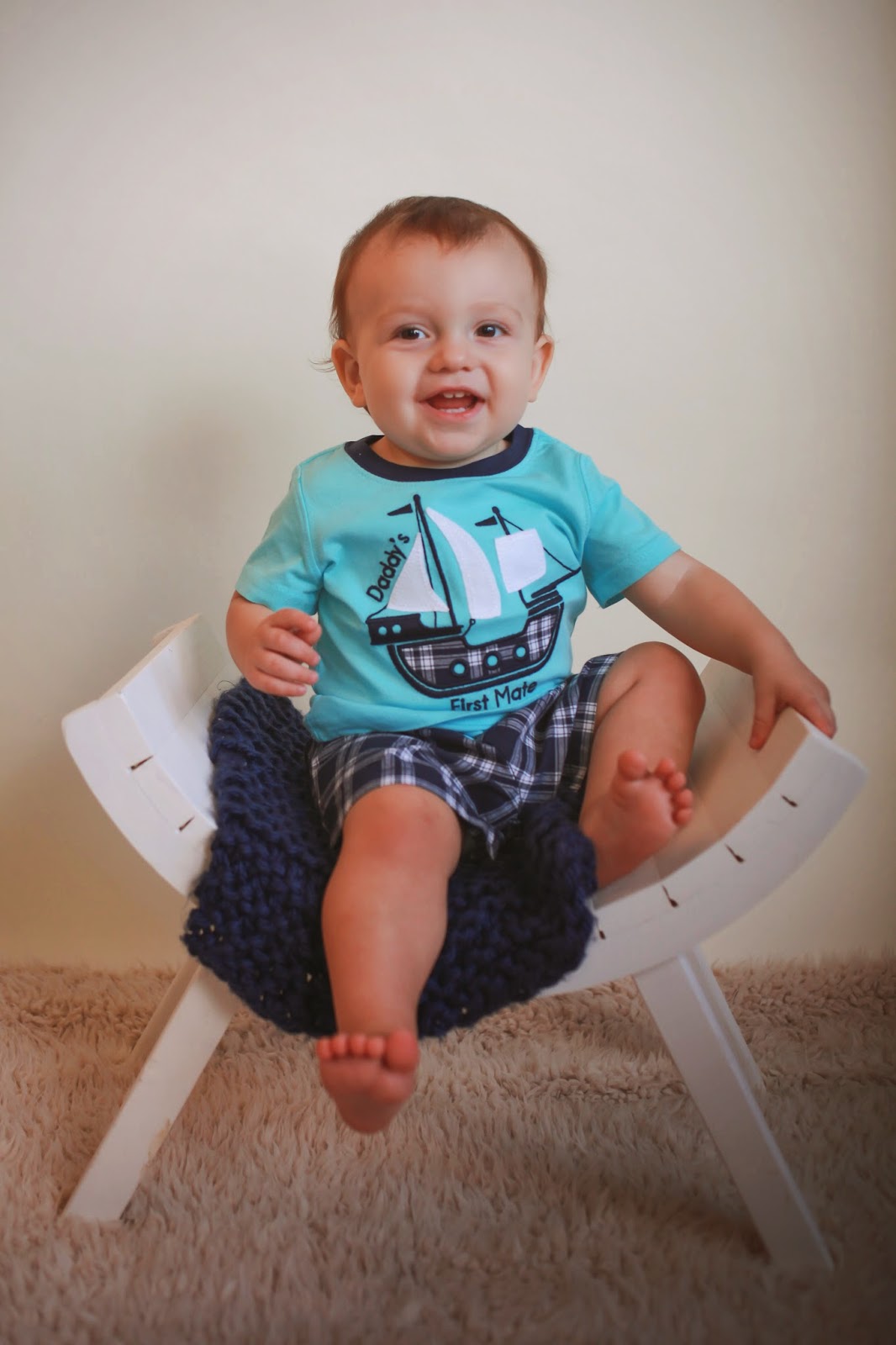 Getting him to sit on the bench was a challenge. He kept wanting to climb right down. 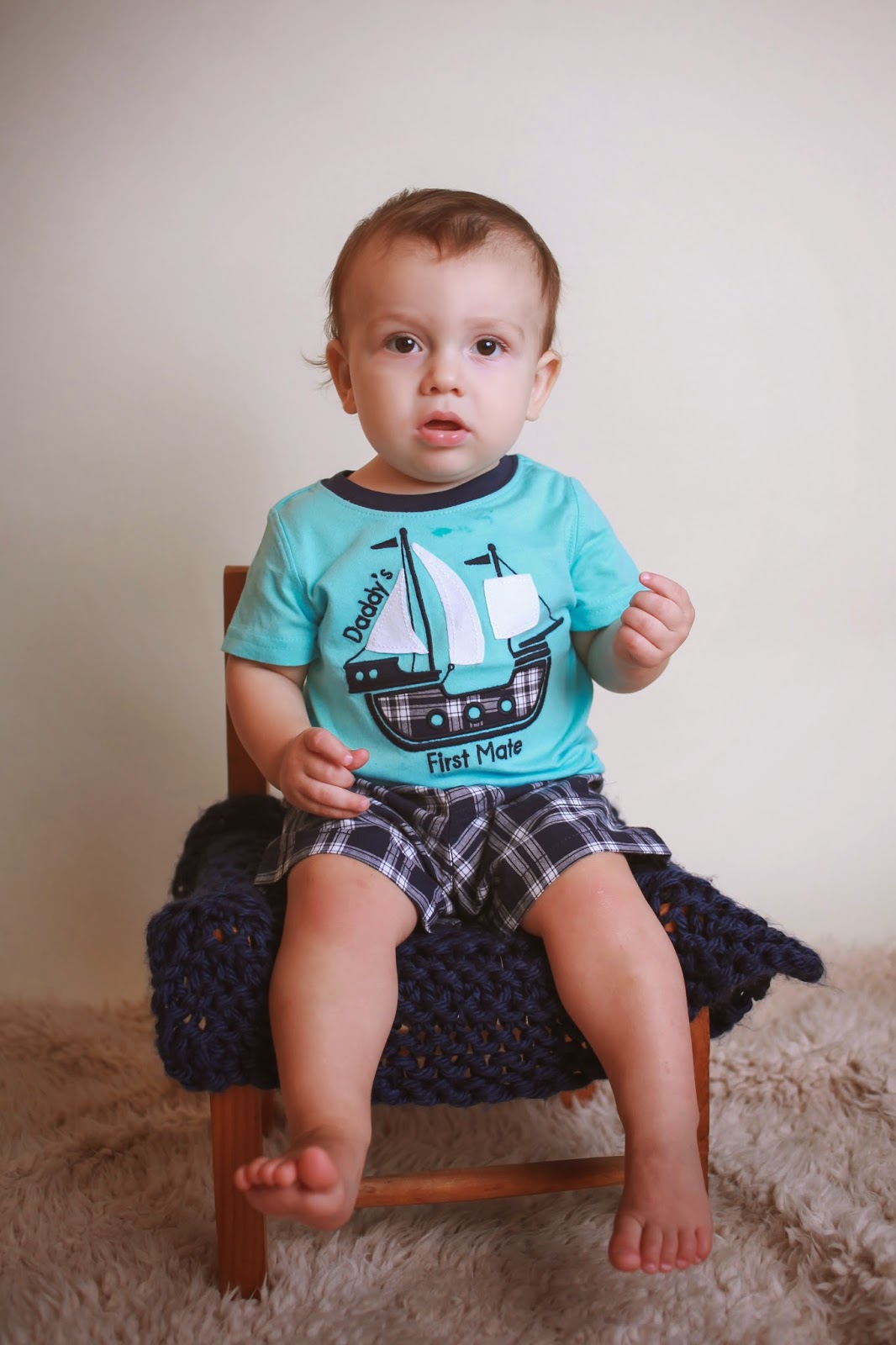 The chair wasn't much easier. 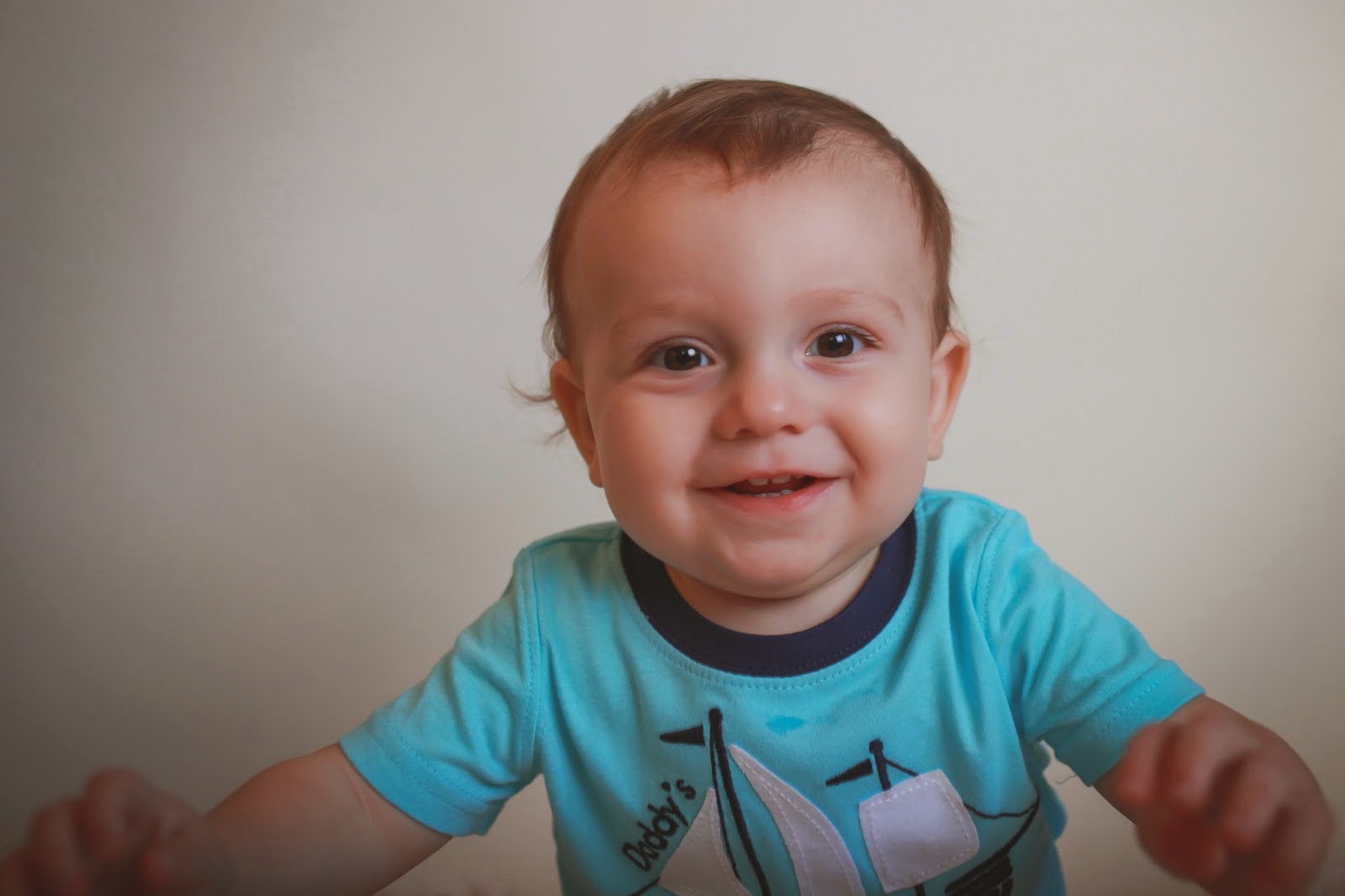 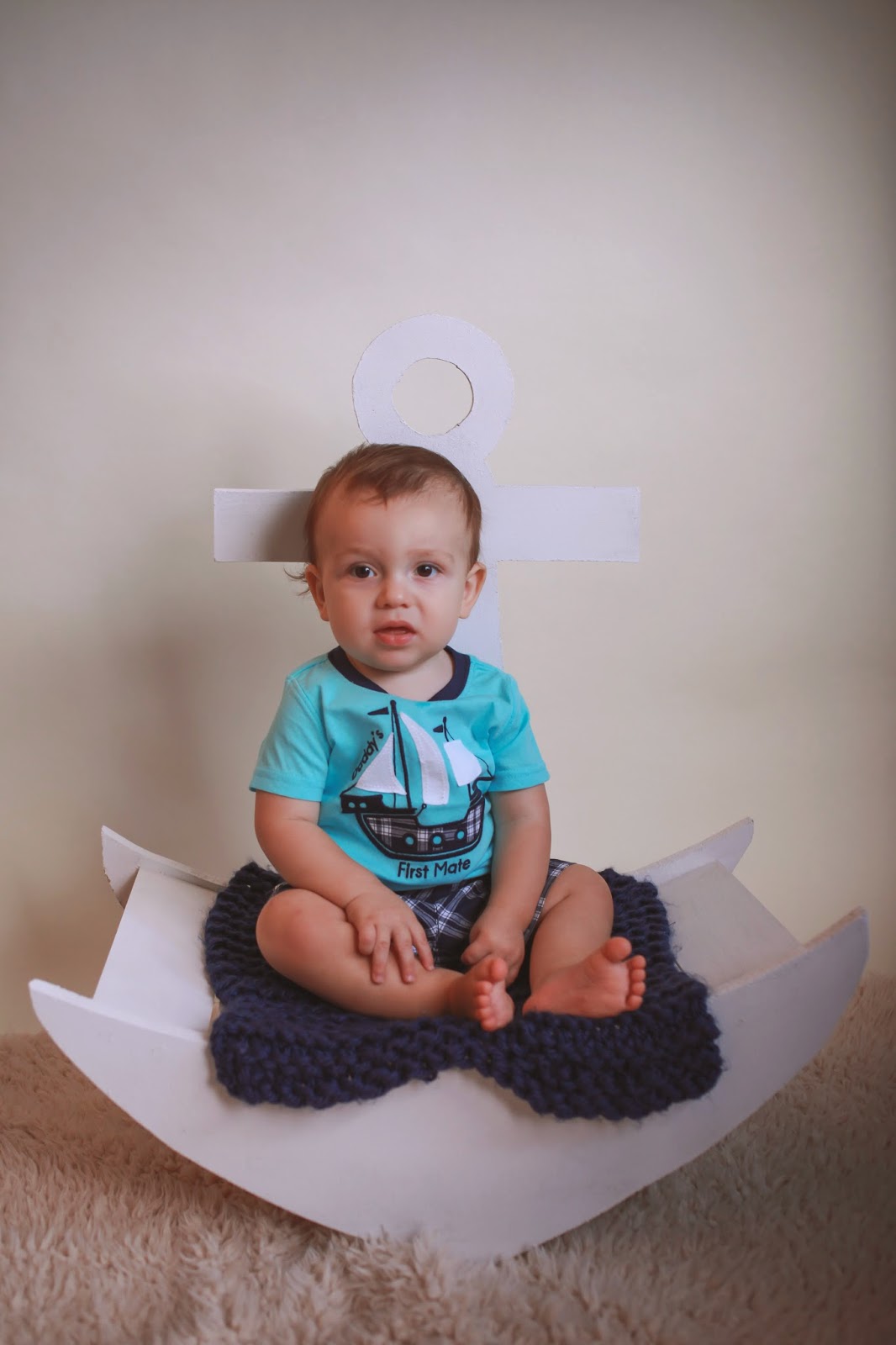 Not a huge fan of the anchor.  I had to keep a hand close by because it would tip over if he tried to climb off.   I think the picture came out really cute, though. Go Steelers!  These ones crack me up, especially since his daddy is a huge Dallas Cowboys fan  :) 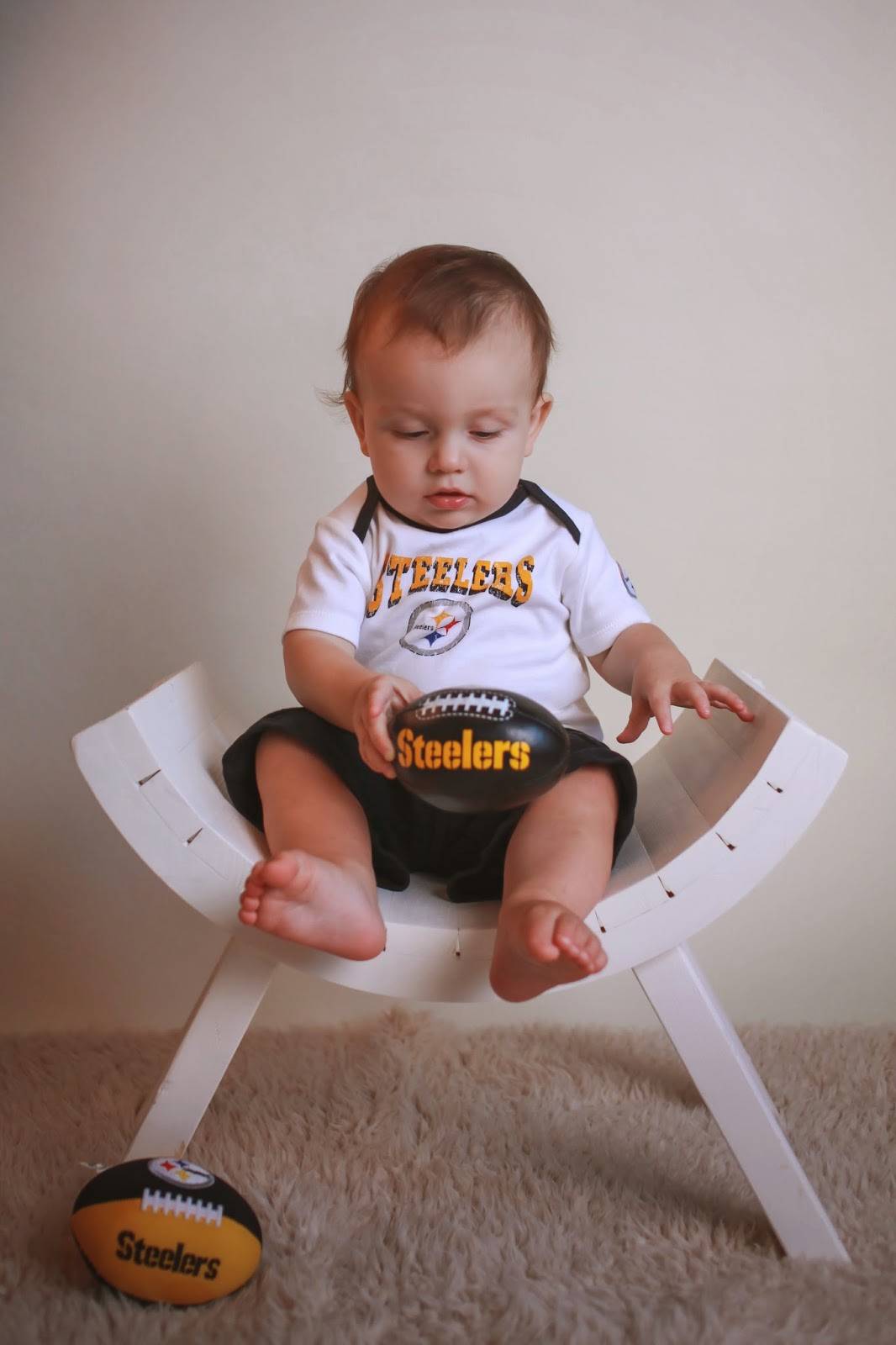 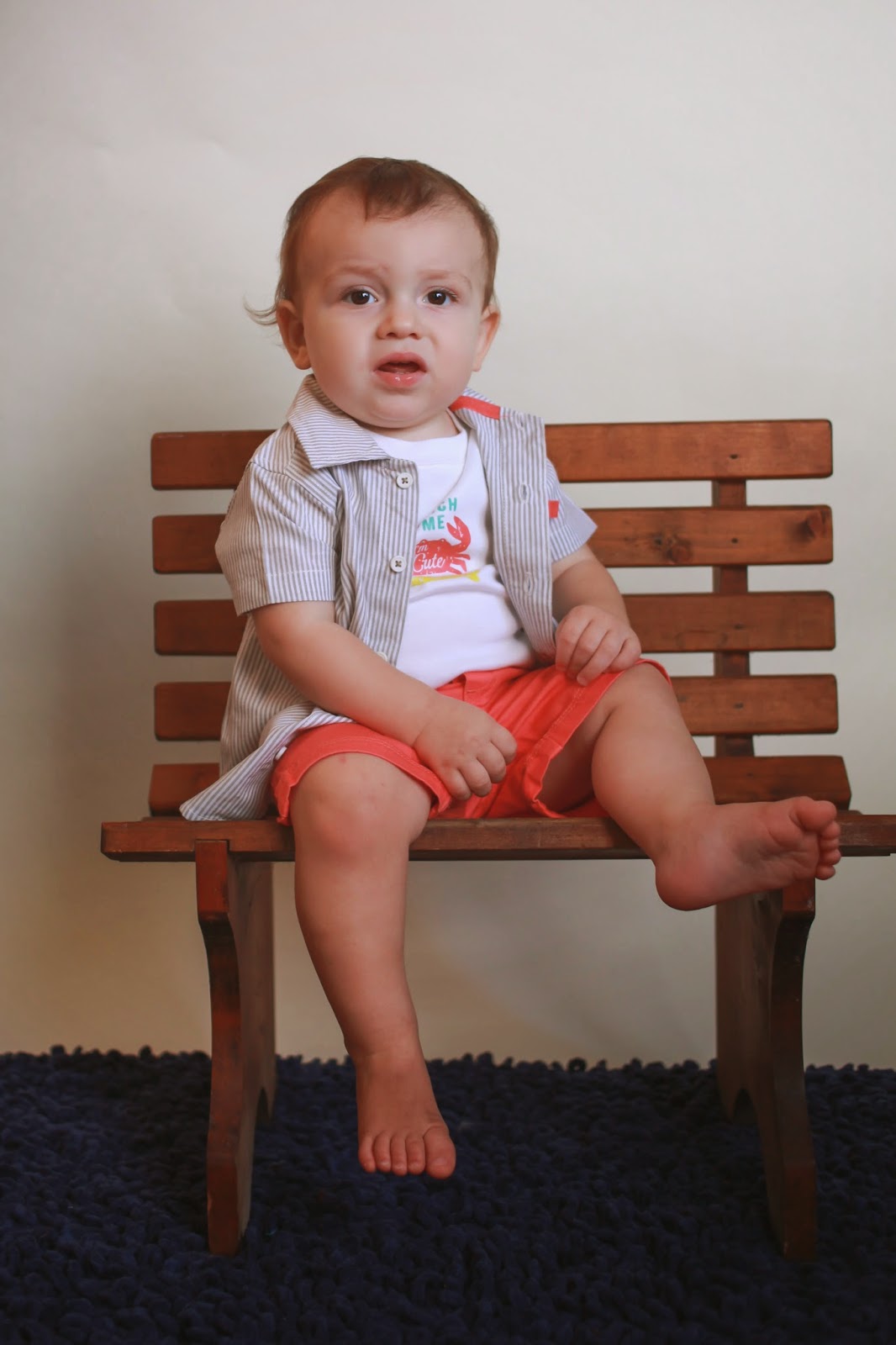 Little dude on a bench. 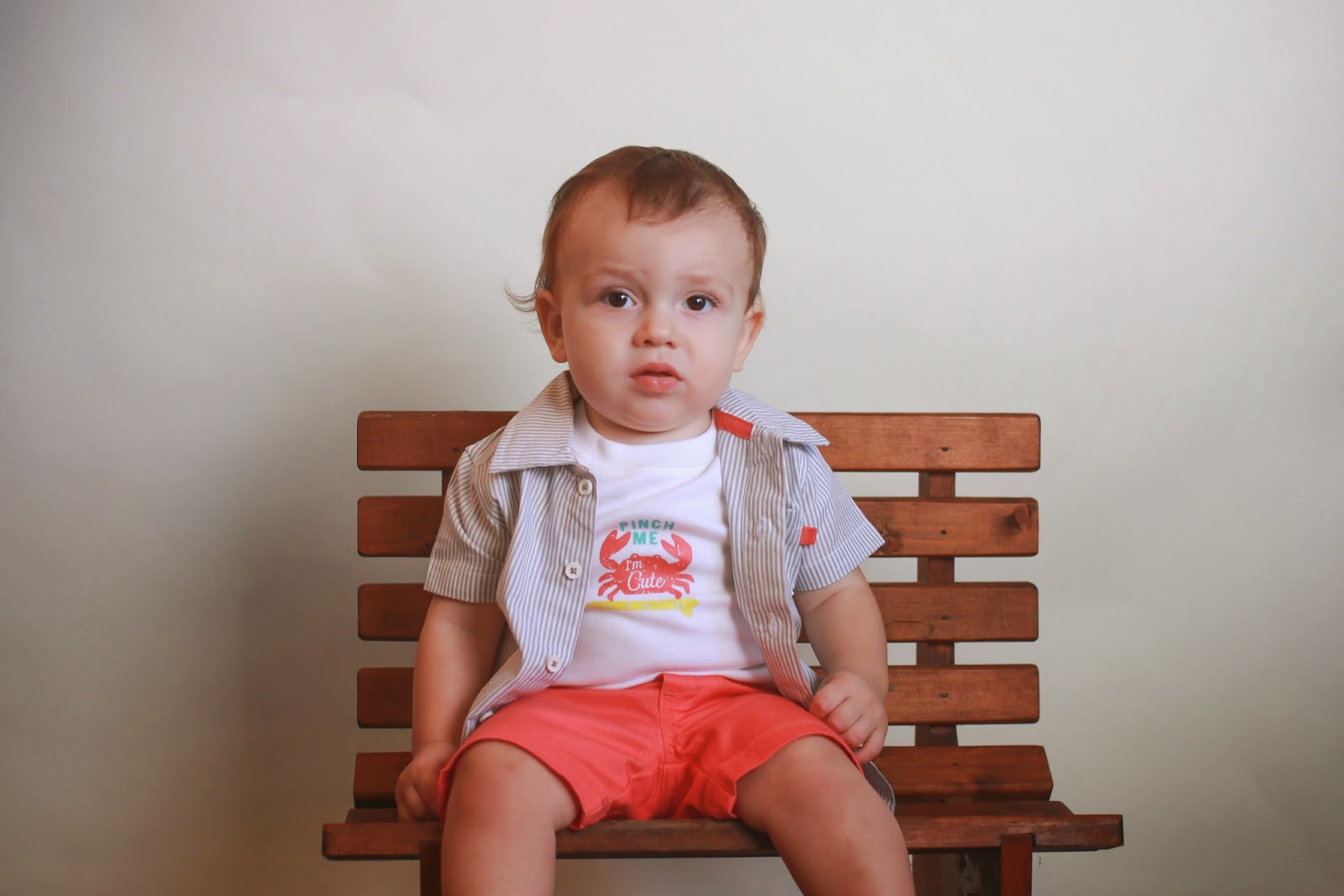 Then it was time for the cake smash: 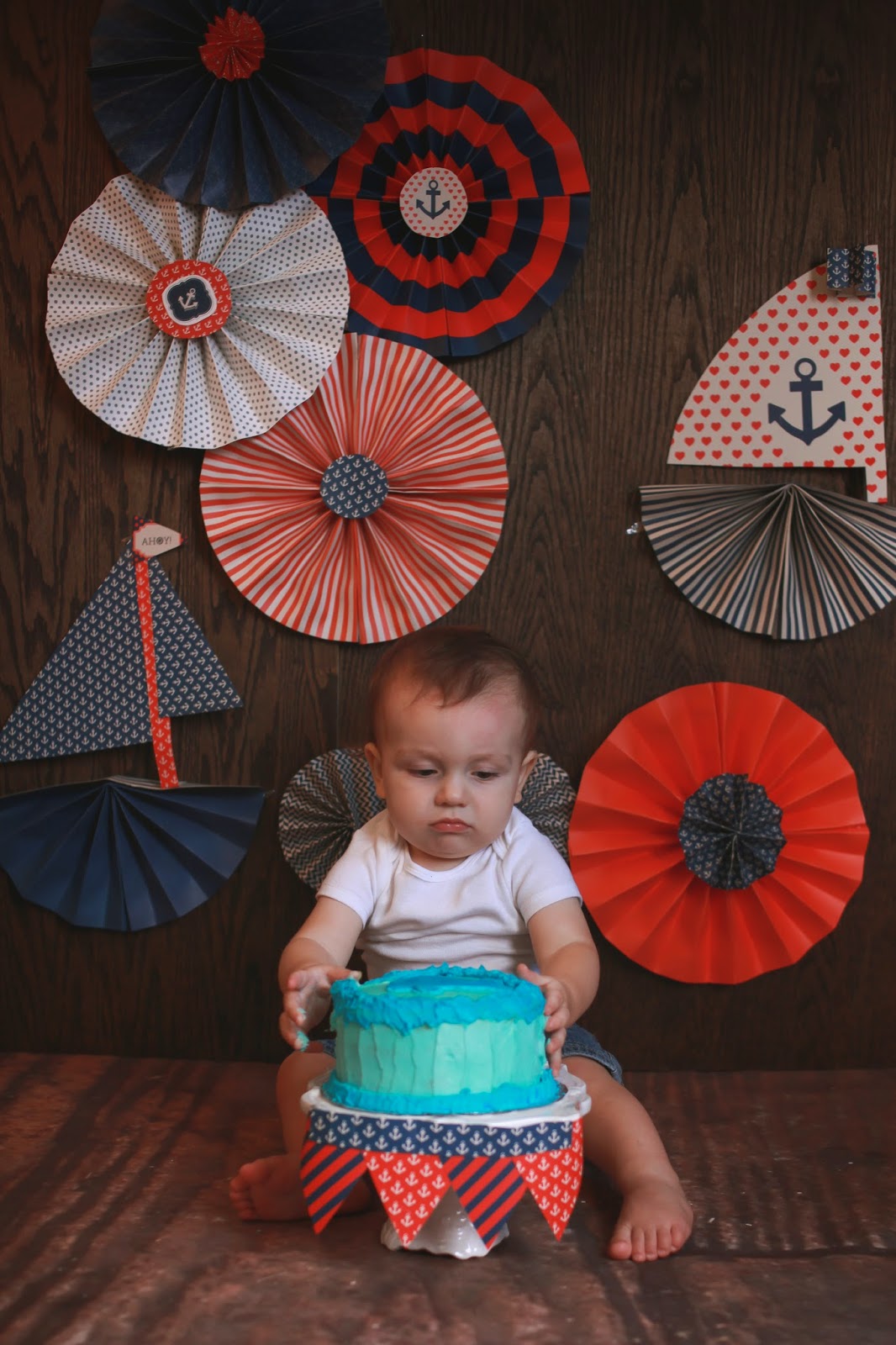 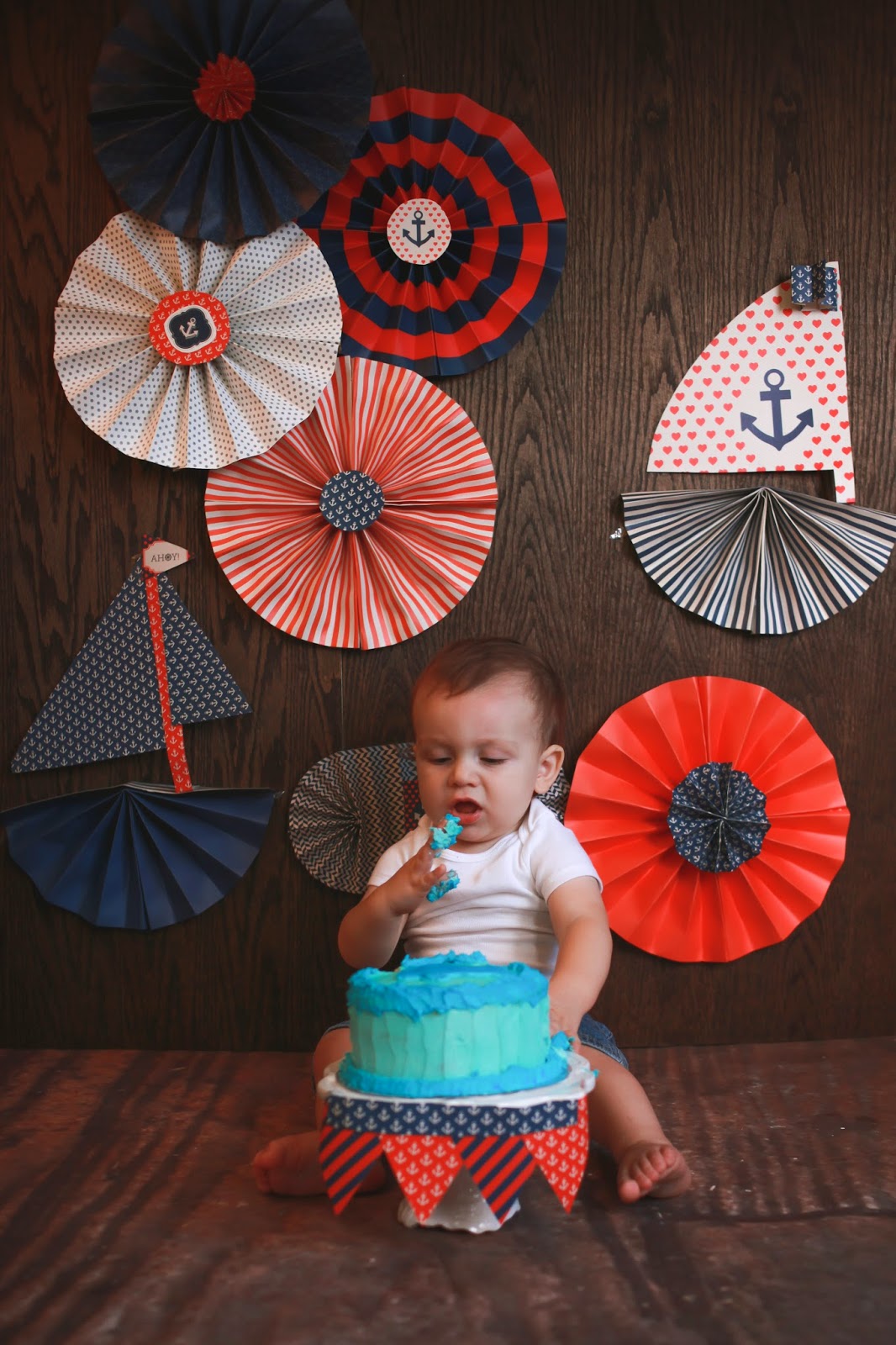 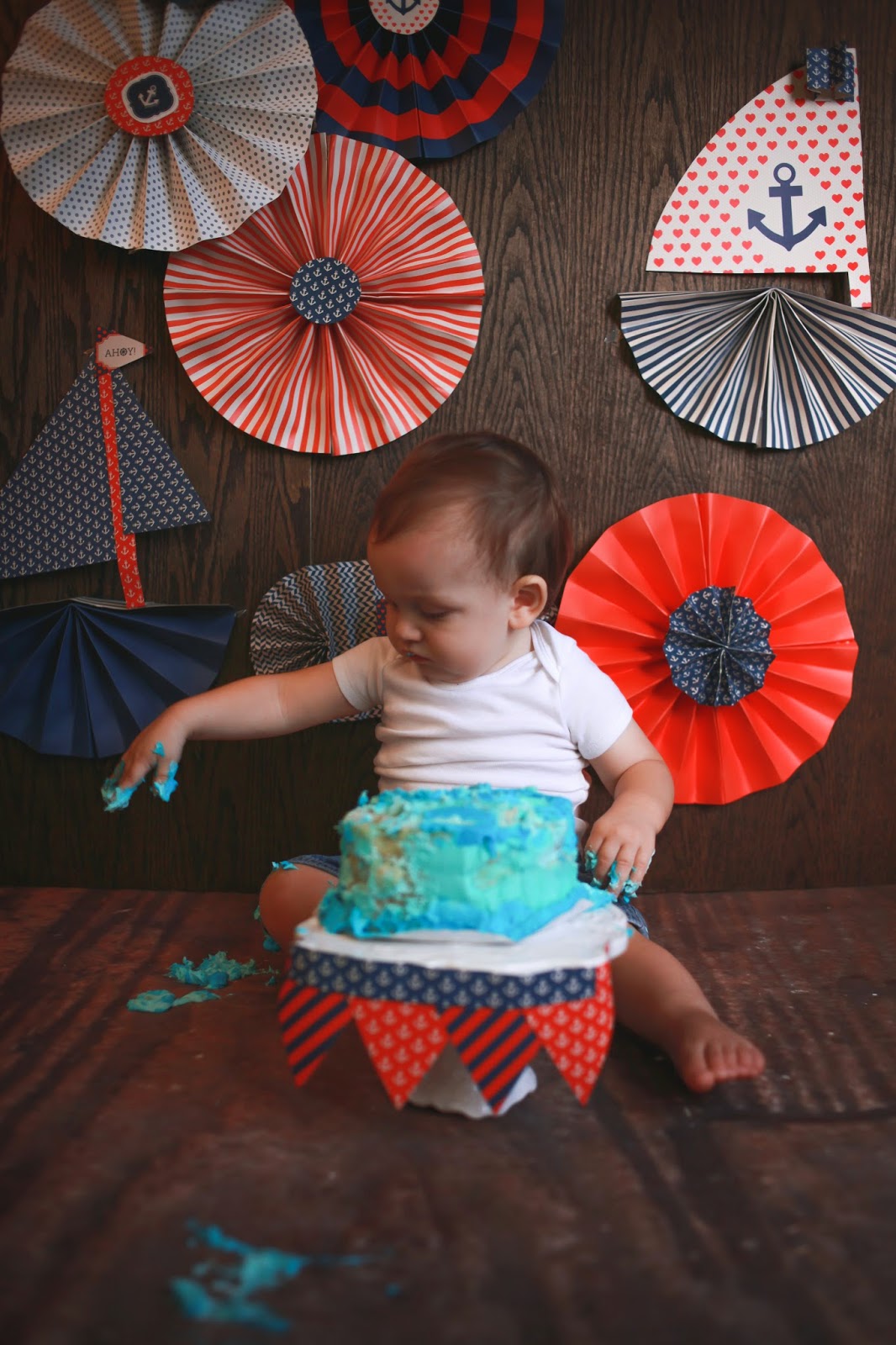 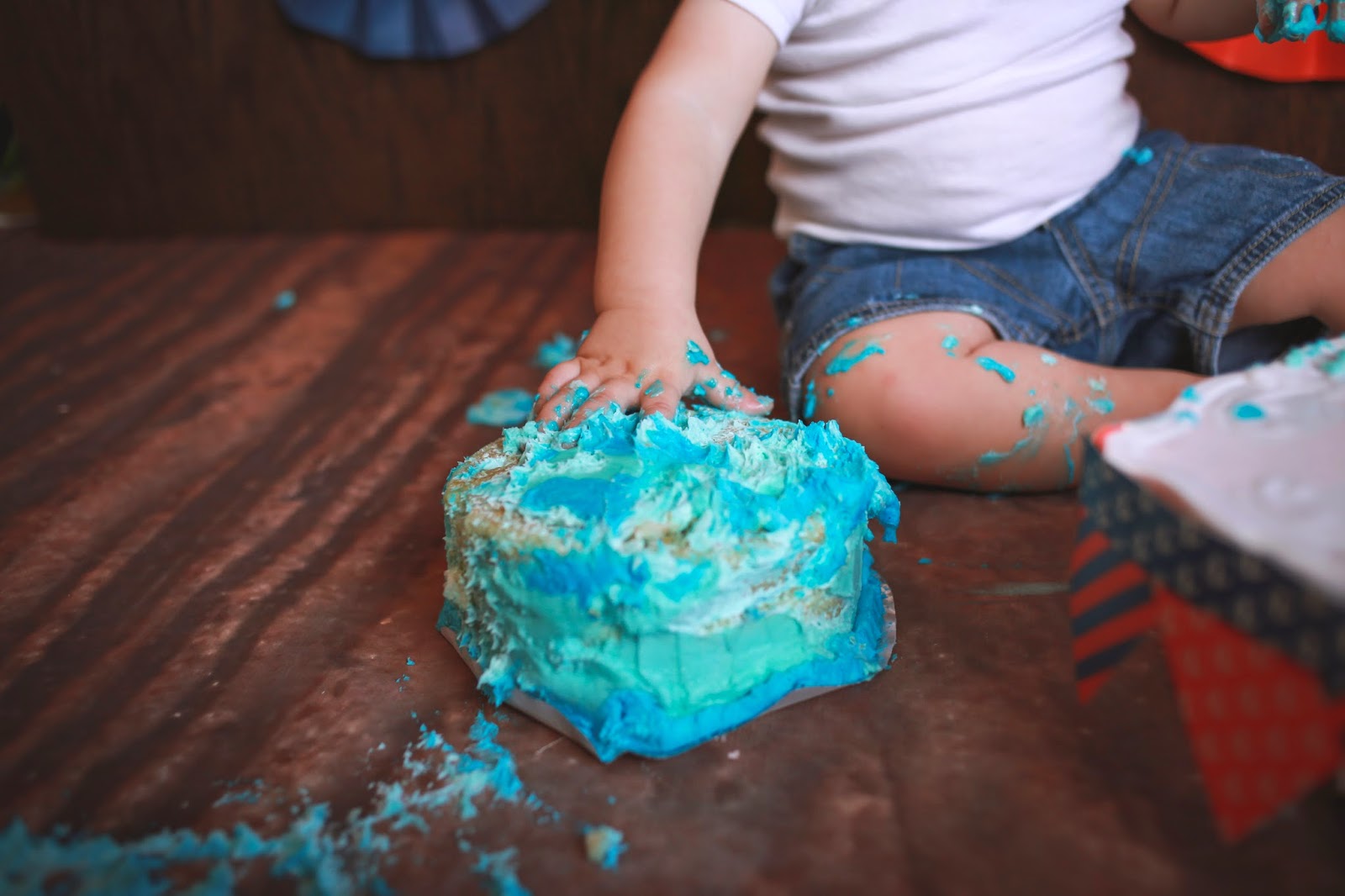 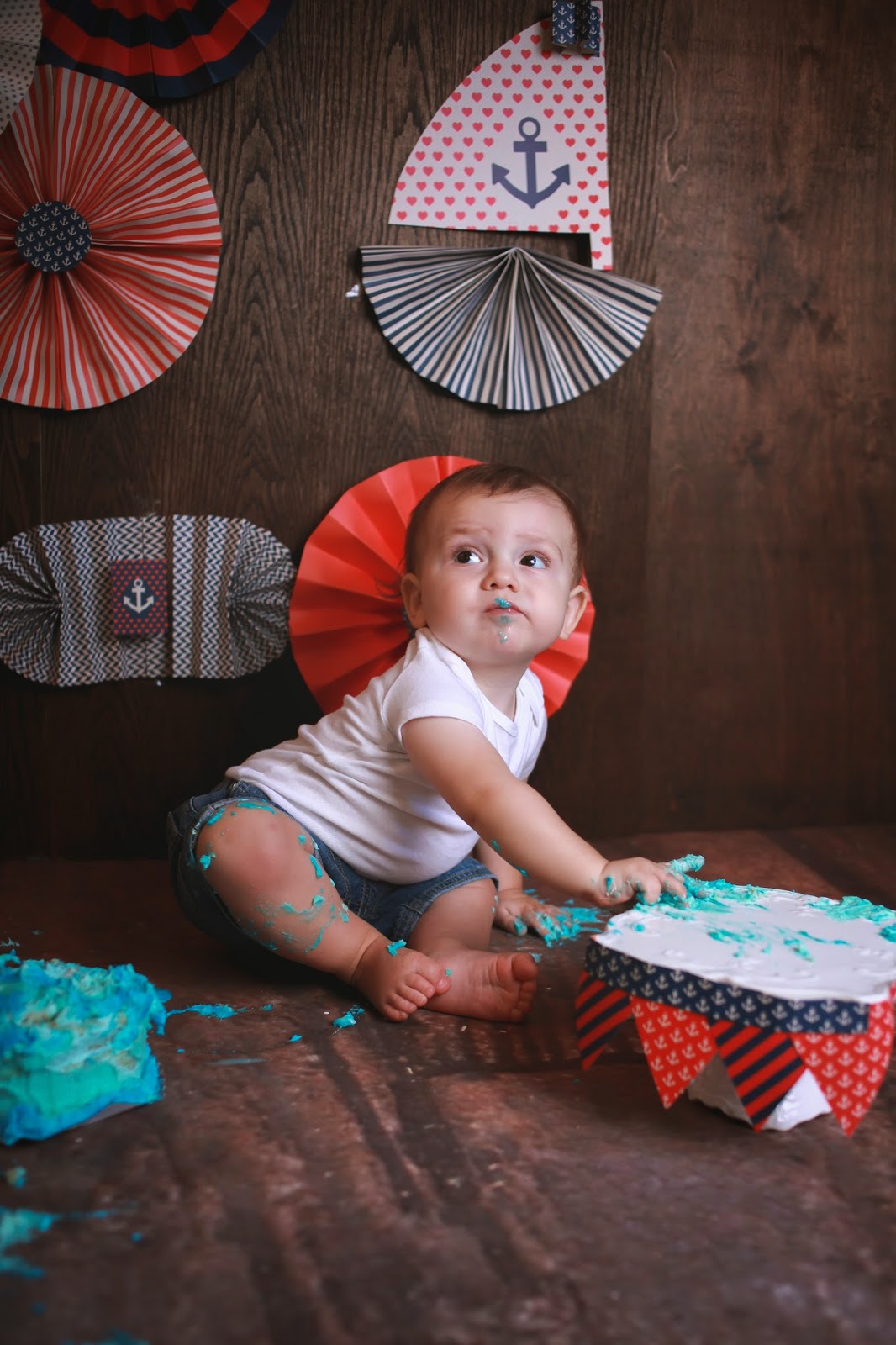 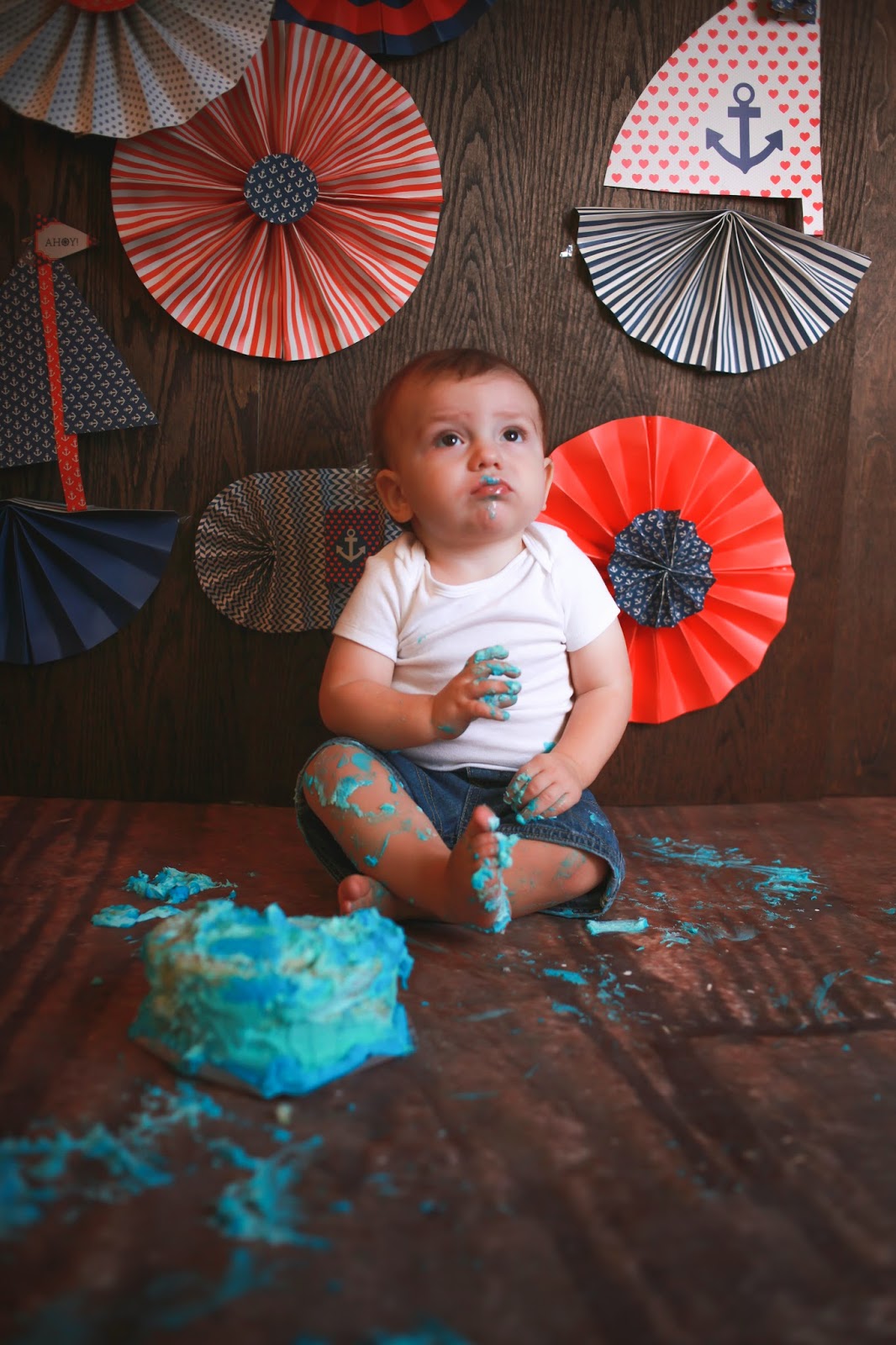 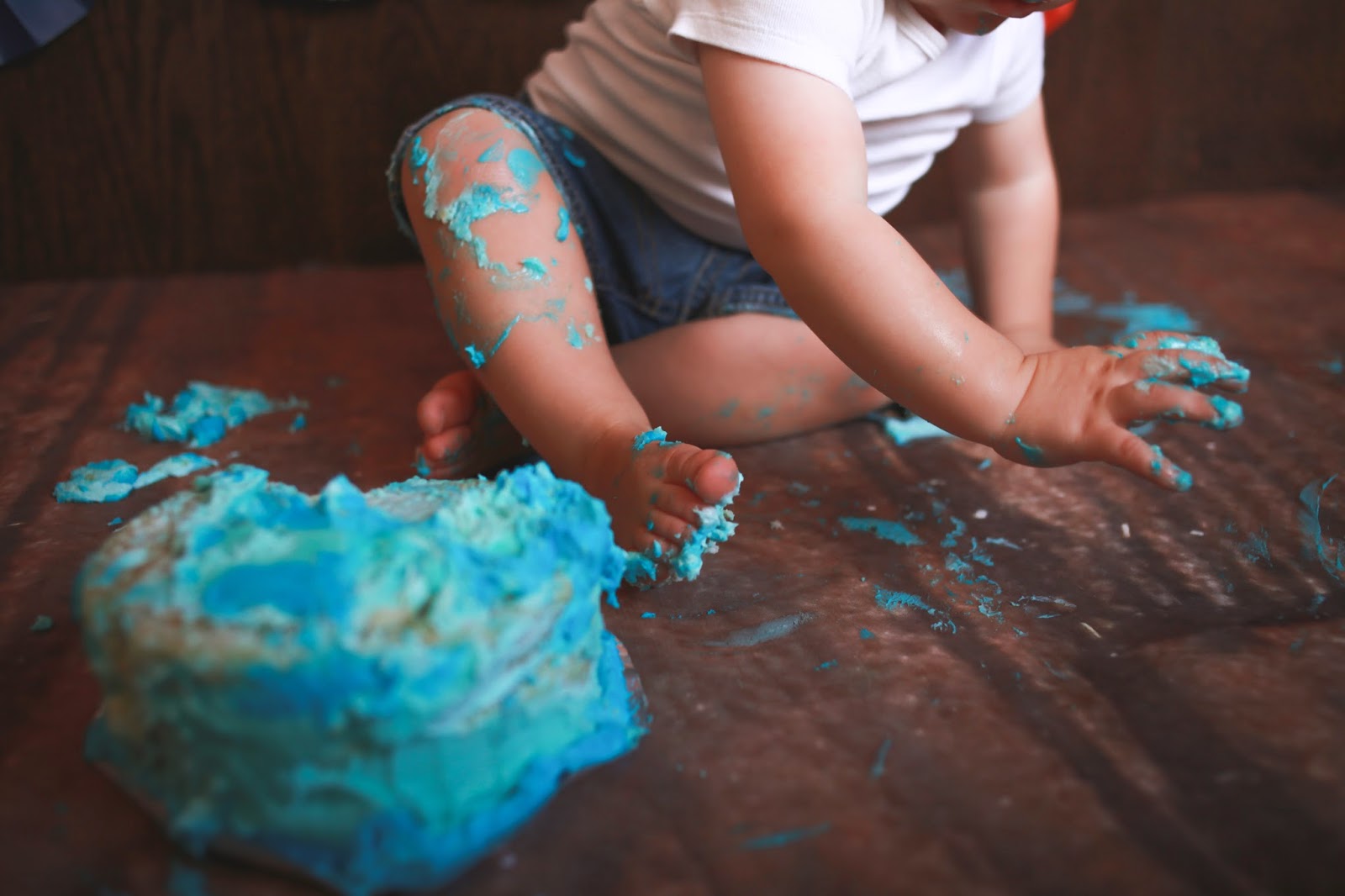 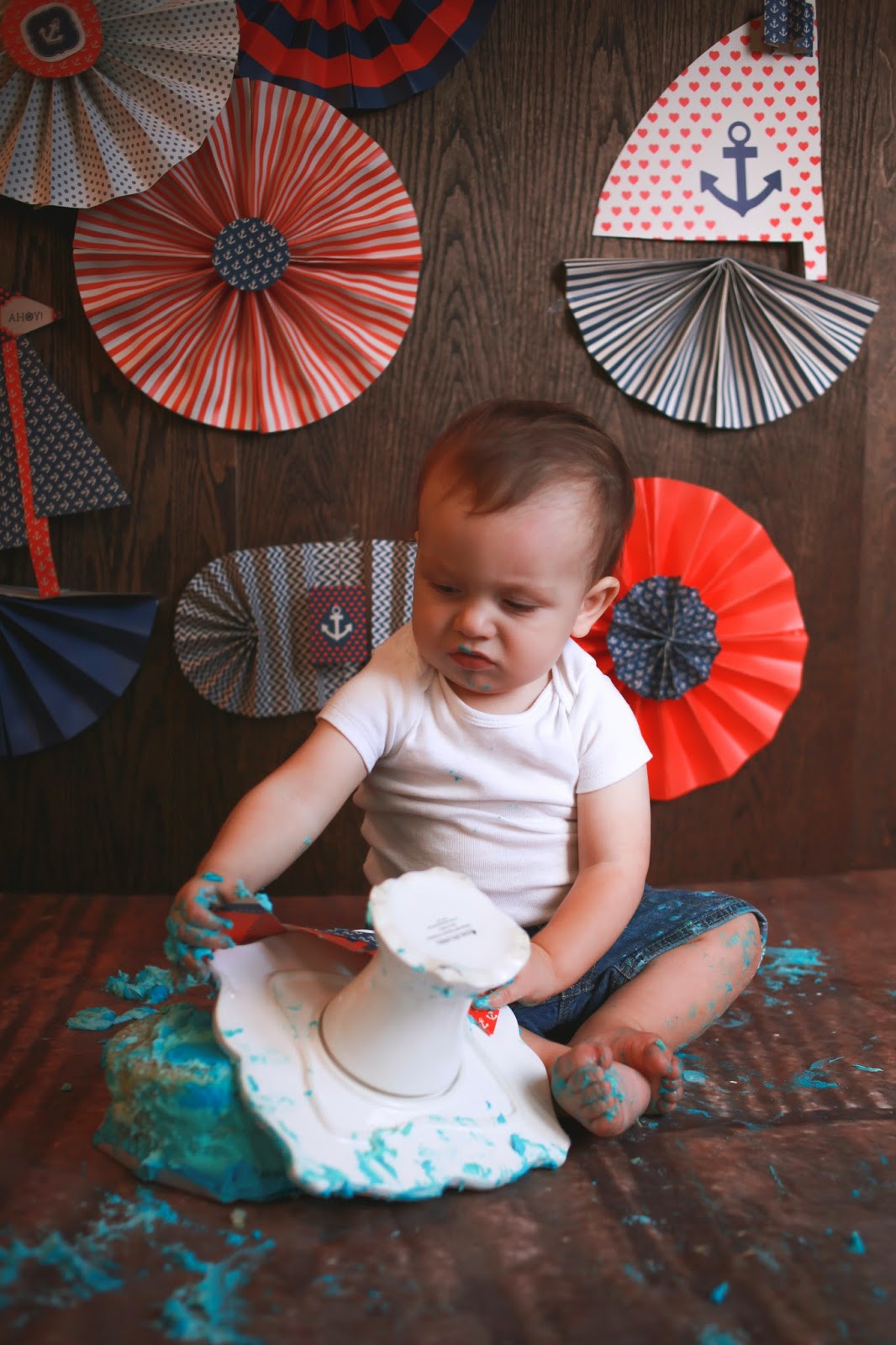 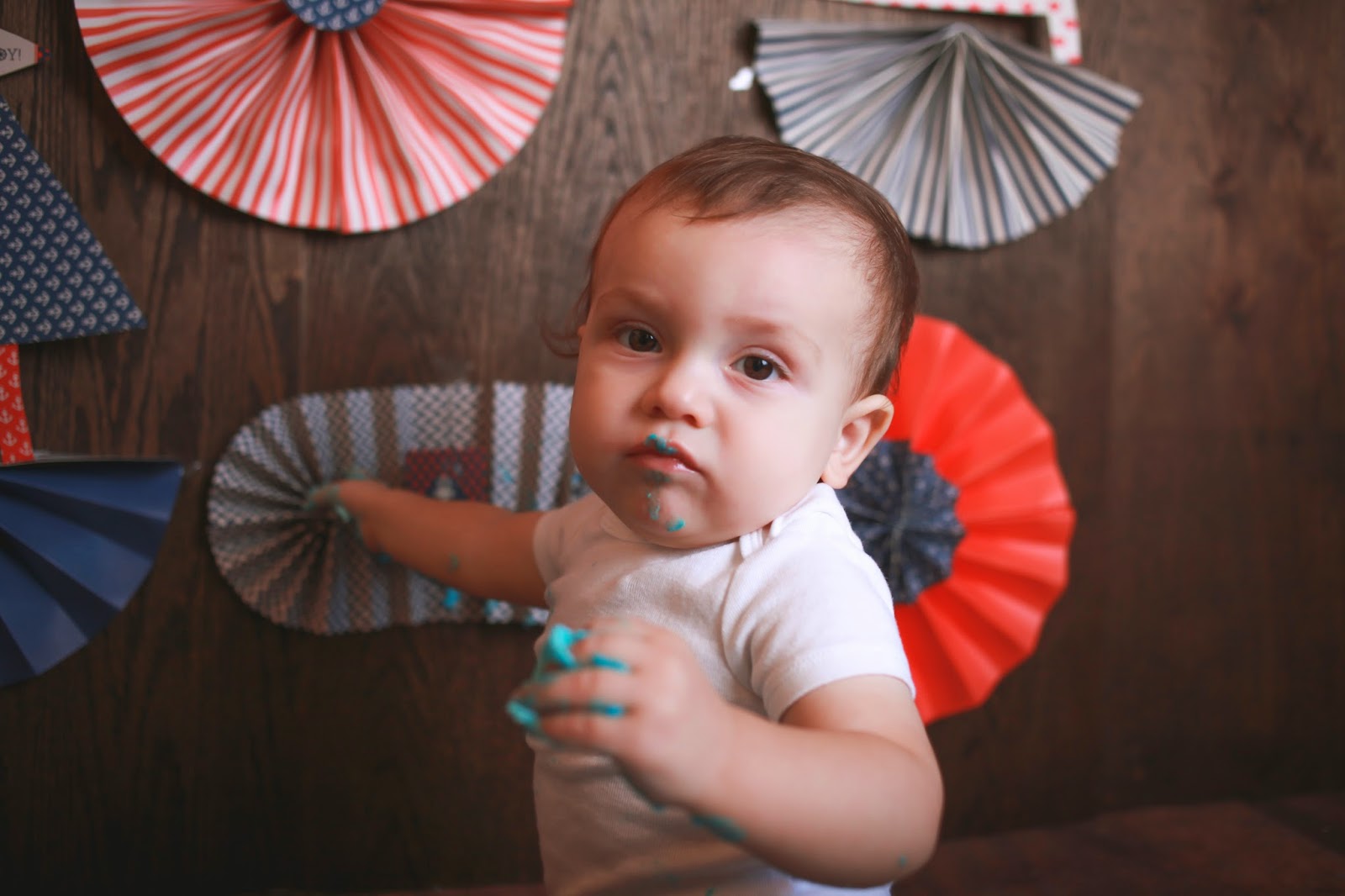 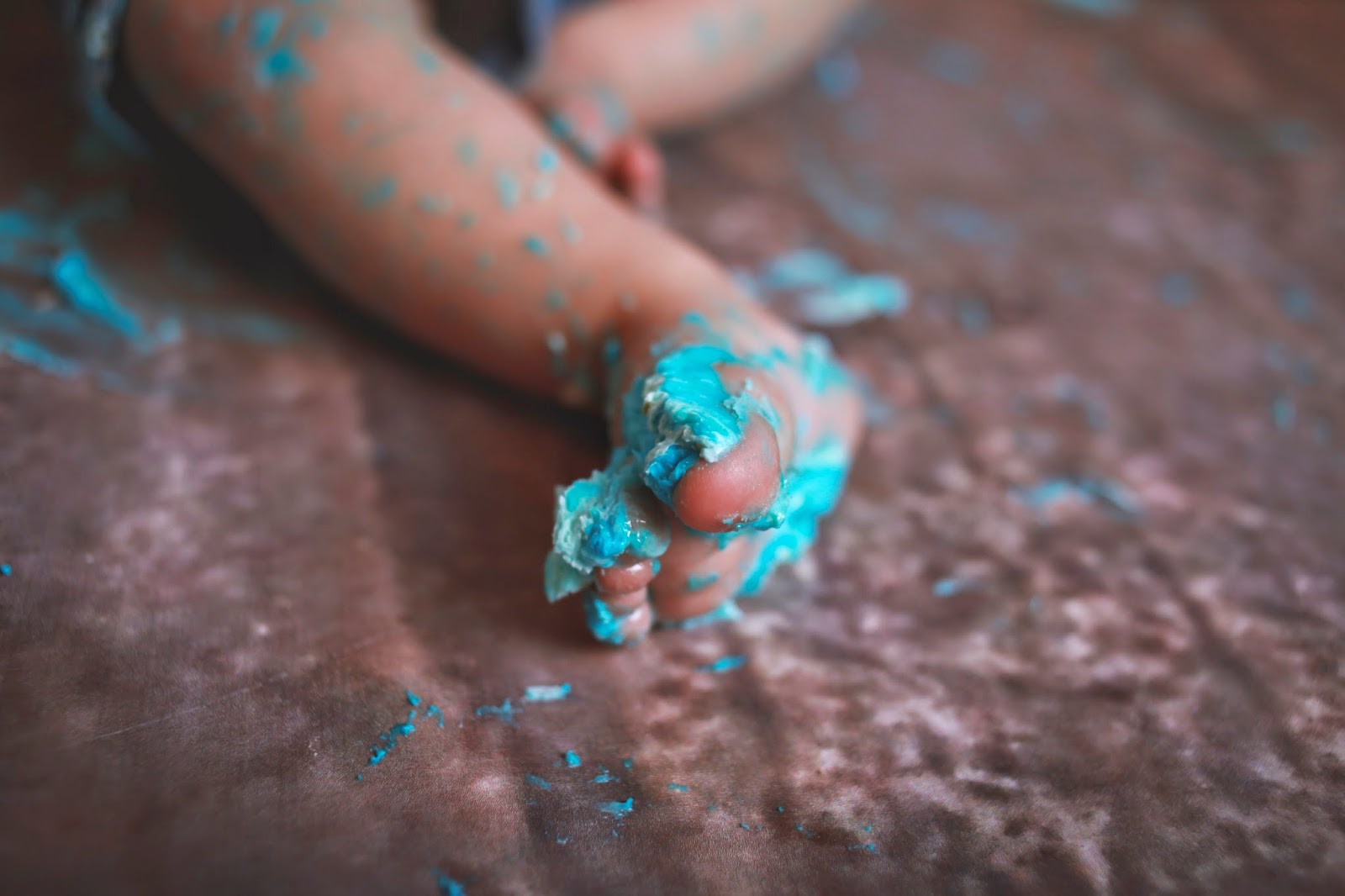 So yet again I am very pleased with the photos that we received. We'll be going back in November when she does her Christmas minis so we can get some photos to use for Christmas cards. Now I just have to figure out what we are going to wear.

This post is actually a week overdue since I received my latest Stitch Fix last Friday. I just haven't had the mental capacity to do it, so here we are.

I have really enjoyed getting these fixes every month, but I am thinking of cancelling because, truth be told, I think I'm spending too much money.  The clothes that I've kept have been great, but some of them have been kind of pricey for what they are (at least in my opinion).  I'm hoping it means they are good quality and will last for a long time, but I guess only time will tell.  Anyway, I haven't cancelled yet and I may just change the frequency so I don't spend as much.  My next one isn't scheduled until the end of October, so I have time to decide what I want to do.

So without further ado - here was this month's fix:

I love these pants.  They are a skinny cut with a great stretchy type material.  I love how they fit and they are really comfortable.  The $78 price tag gave me a second thought, but I see me getting a LOT of wear out of them, so I kept them.

I did not love this shirt.  It fit fine and was a comfortable material, but it was not worth $48 in my opinion.  It's kind of cute, but I wouldn't spend more than $20 on something like this.

I loved this cardigan.  I can't remember the exact name of it or the color, but it's an open knit in a plum type color.  Very comfy and I can see me wearing it quite a bit over things, so I kept this one.

This shirt was ok. It has sheer panels on the shoulders, which isn't really my style. It fit well and it wasn't unflattering, but I didn't see me wearing it much and couldn't justify the $56 price tag.  It went back.

I did not like this shirt.  I liked the material, but it did not fit well and was pretty unflattering. I wasn't going to shell out $48 for this so it went back.

I was happy to find two pieces that I wanted to keep and I still think this is a great service.  I will look forward to getting another fix at the end of next month and until then I'll try to get some wear out of the eight items that I have kept so far.