Friday, which happened to be when Elliot turned 14 months, we decided to take half days at work so we could go to the pumpkin patch and hopefully avoid the huge weekend crowds.  We picked them up from Andrea's and school and headed to Boone Hall around 12:45.  The parking lot had a lot of cars, but it wasn't slam packed.  We tossed Elliot in the stroller and headed for the entrance.  I went up to pay the admission for us and was a little taken aback that it cost $10 each (except Elliot).  $10 for a three year old?

Whatever. We headed in to see what there was to do.  We stopped for a quick picture: 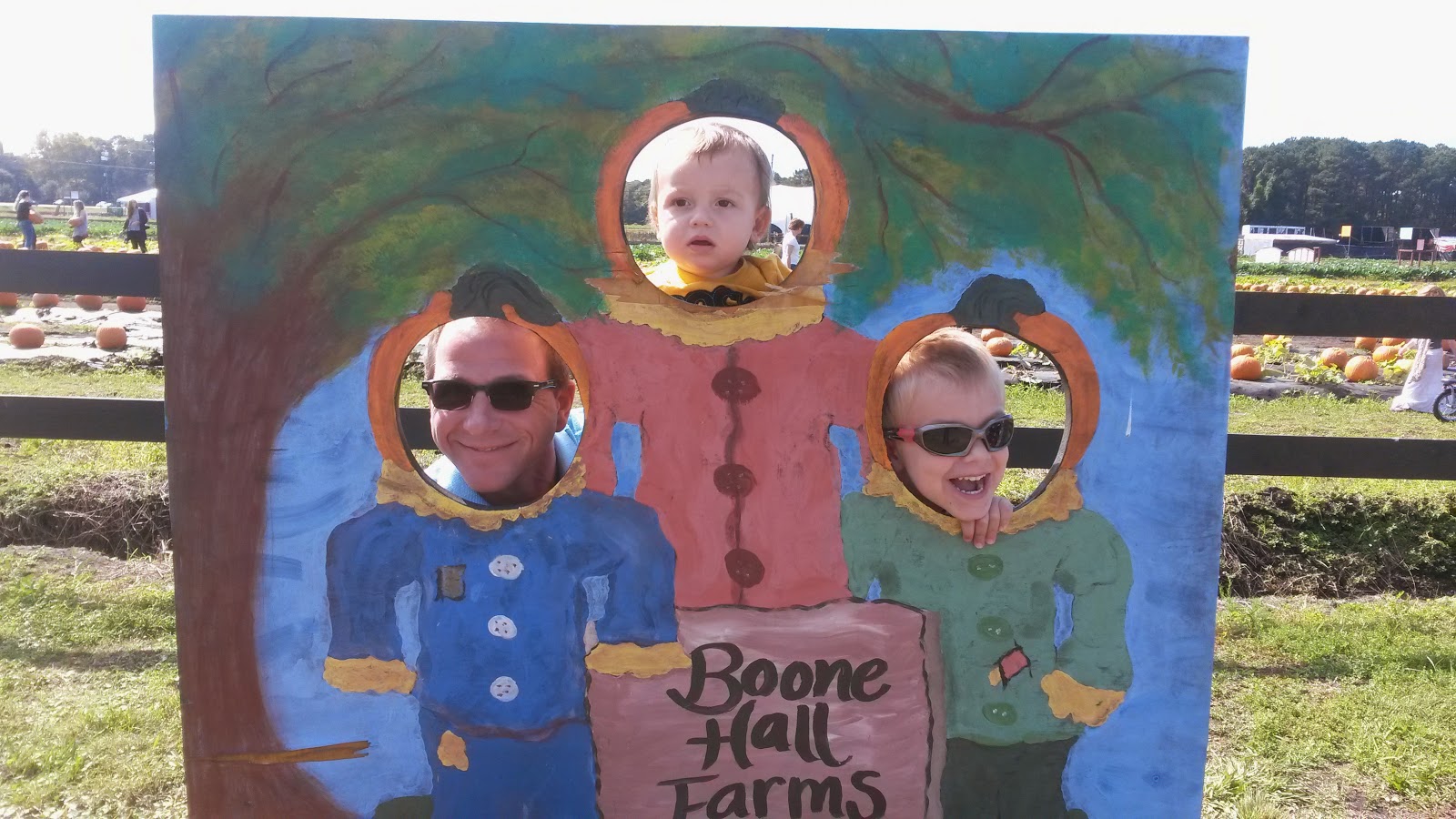 They had the big jumping pillows and Andrew said he wanted to go in there., Of course once he was up there he did this: Then we headed over to the jump castle area. Andrew didn't want to get in, but he wanted to try the basketball game. Even cheating he couldn't make a shot: 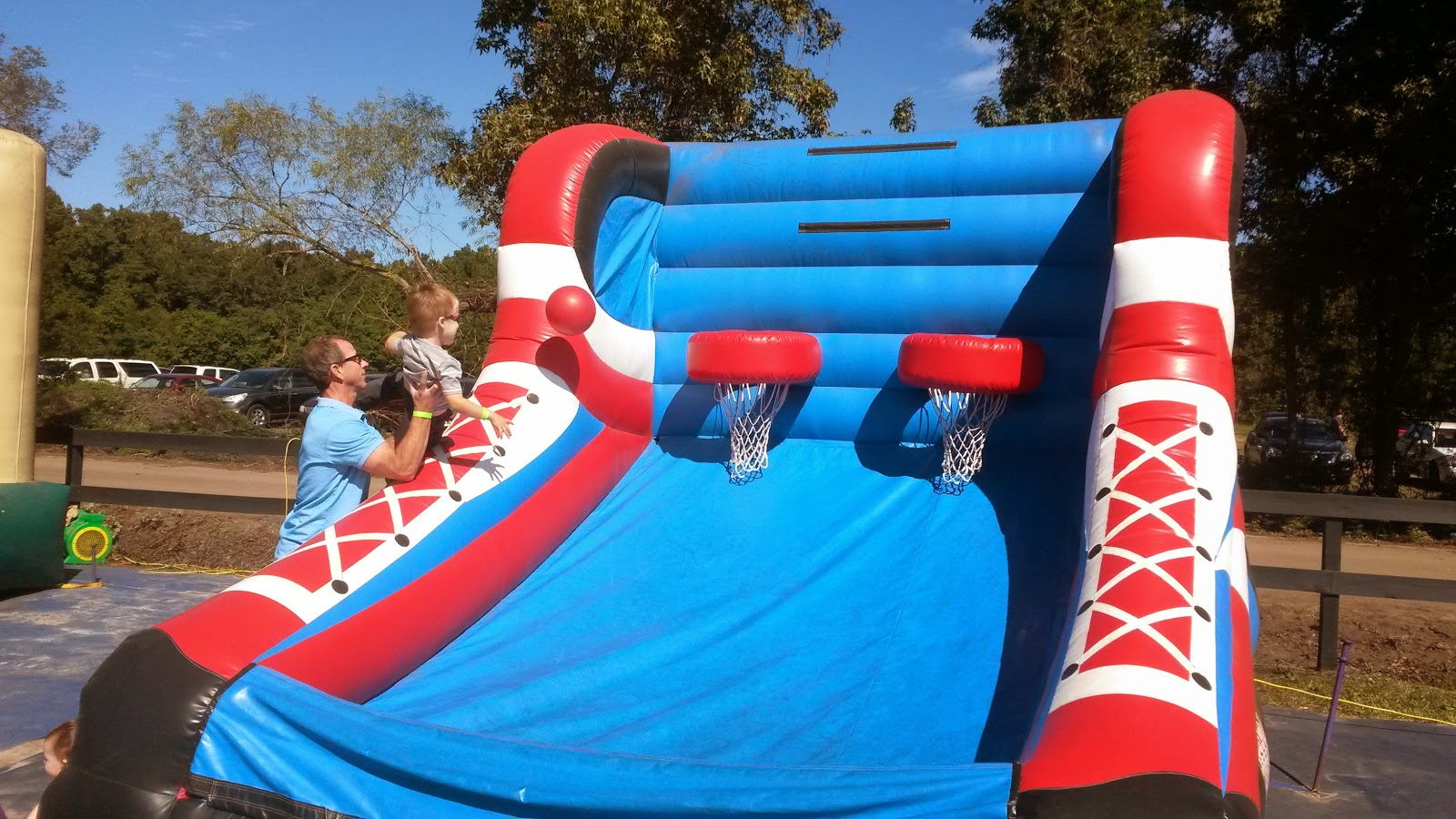 The boys played in the sand area and went down the slides before we headed over to the hay ride.  We parked the stroller off to the side and hoped that no one would steal it, then climbed up.  The hayride took off and Andrew happily pointed out all of the things that we saw along the way: 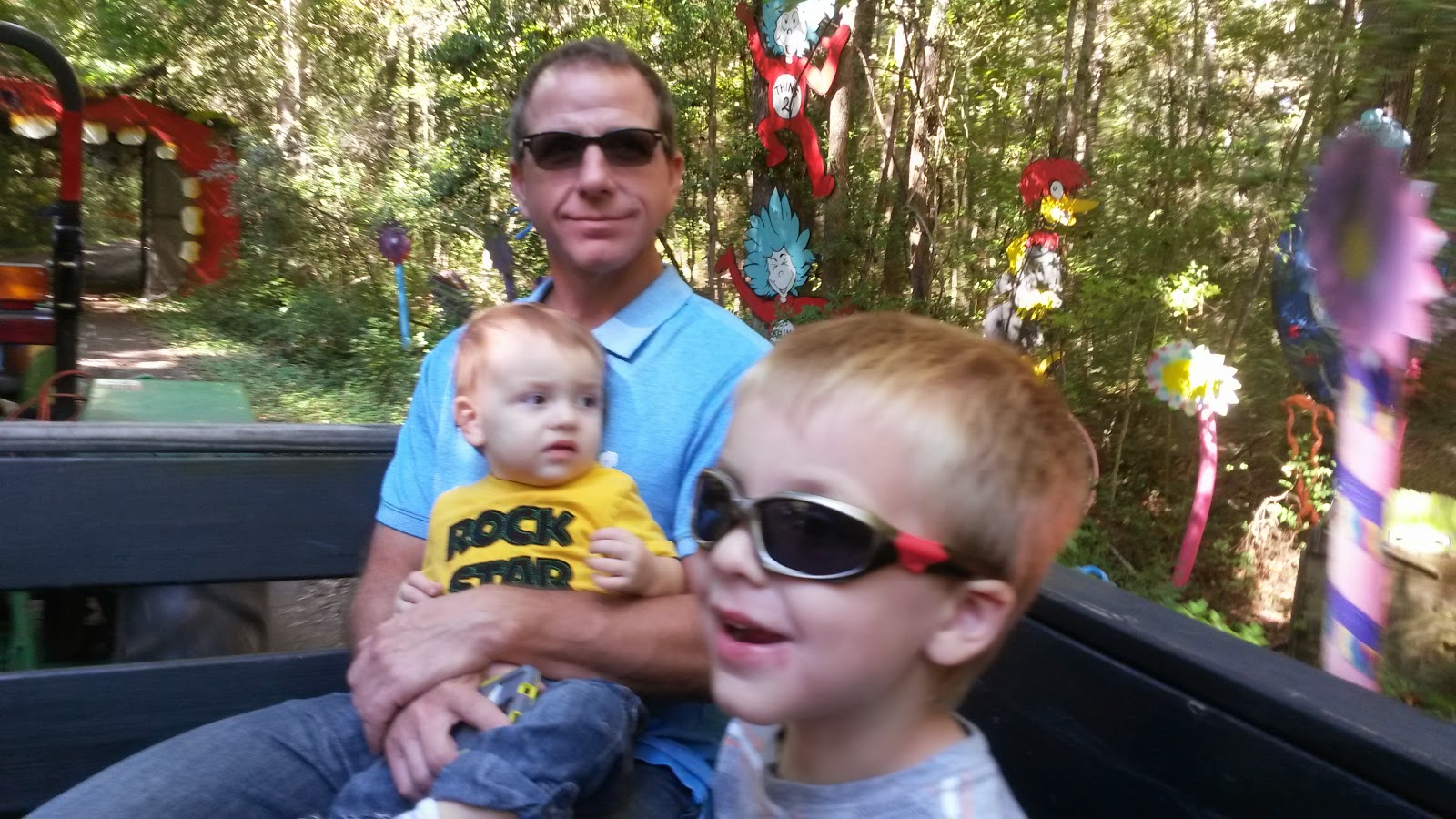 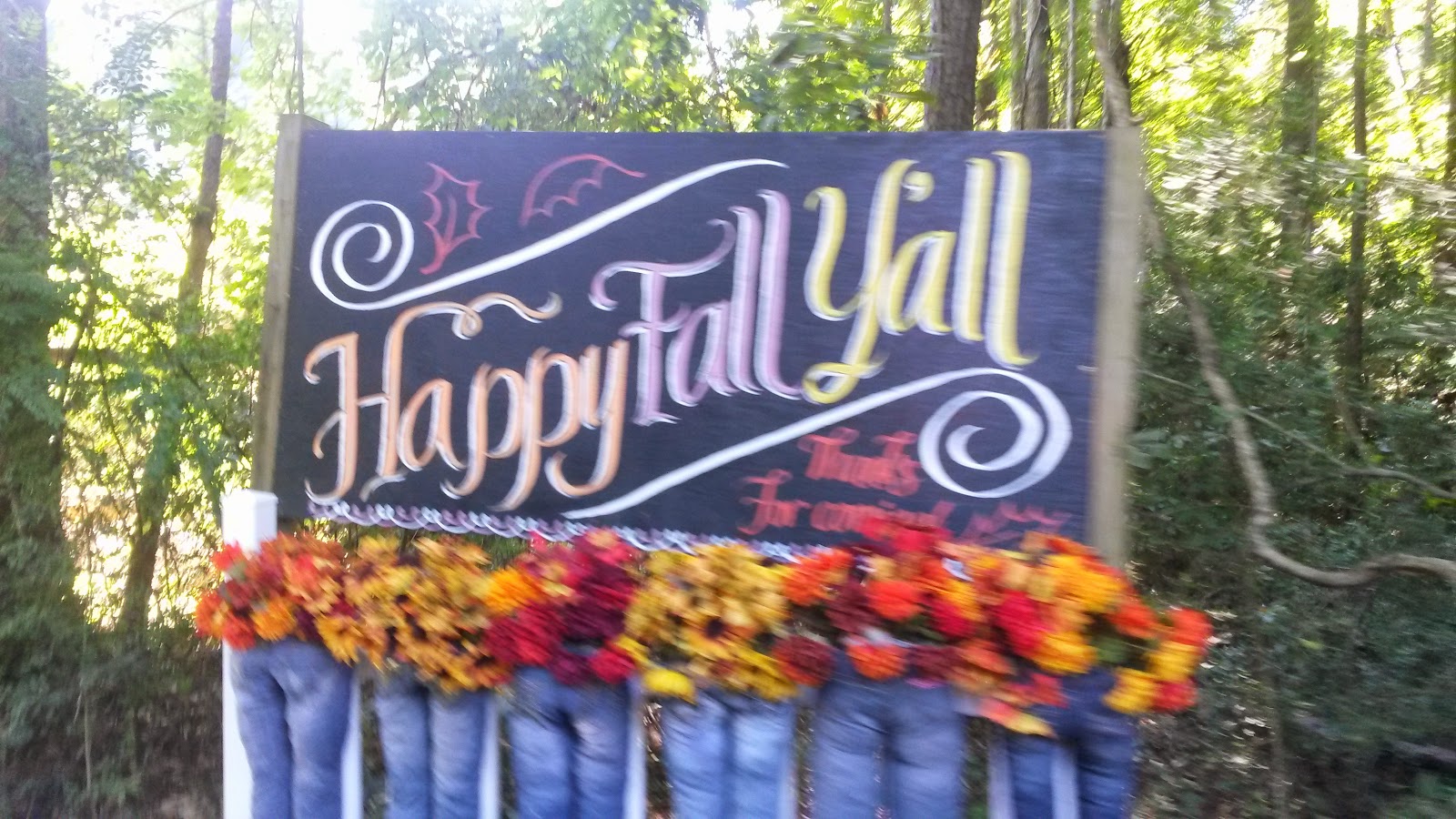 Once we got done we went and got our stroller and decided to try the corn maze: 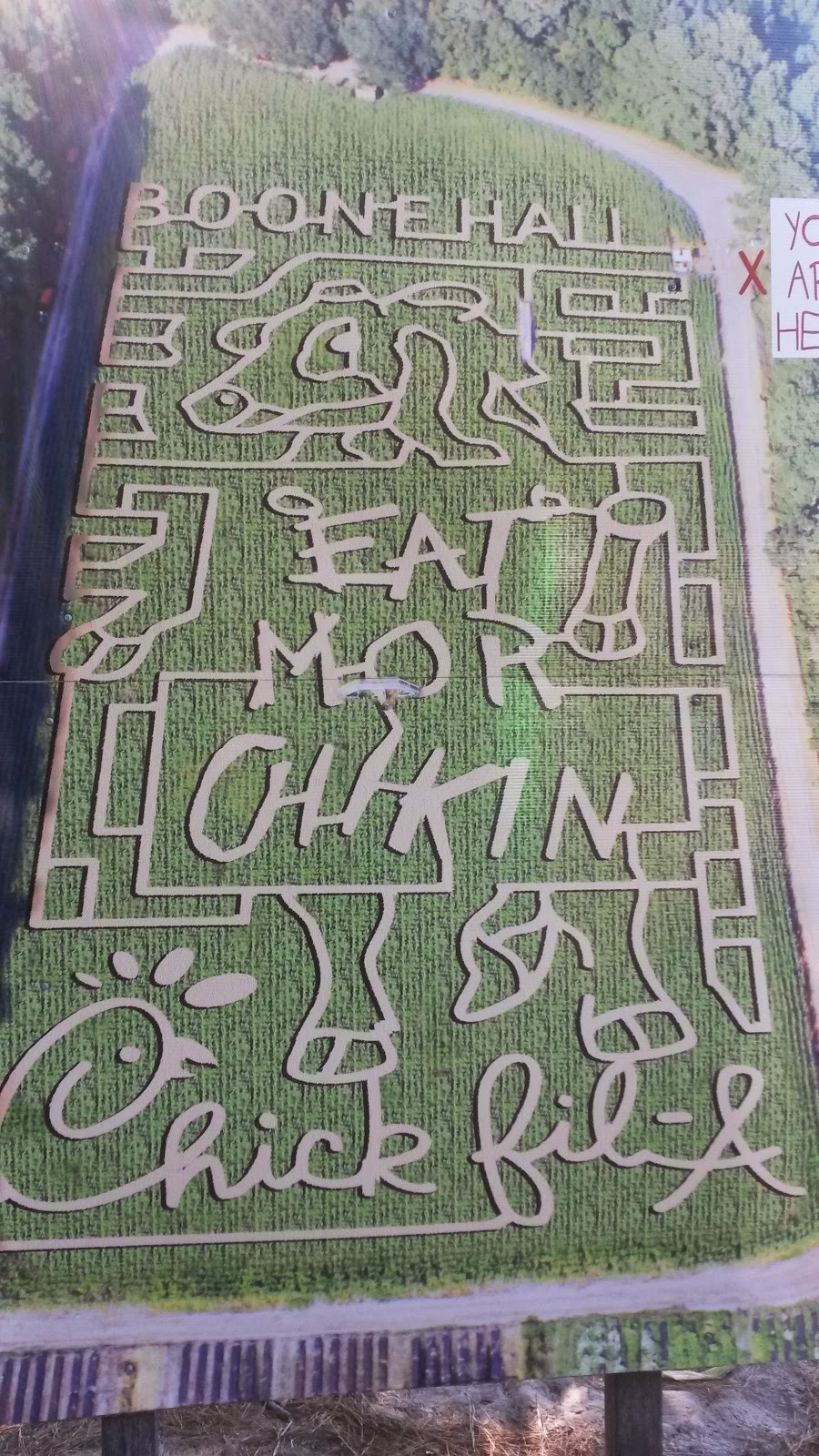 Unfortunately we didn't take that picture before heading into the maze so we had a little trouble finding our way through.  Andrew must not have had faith in us, either, since he took a flag with us: 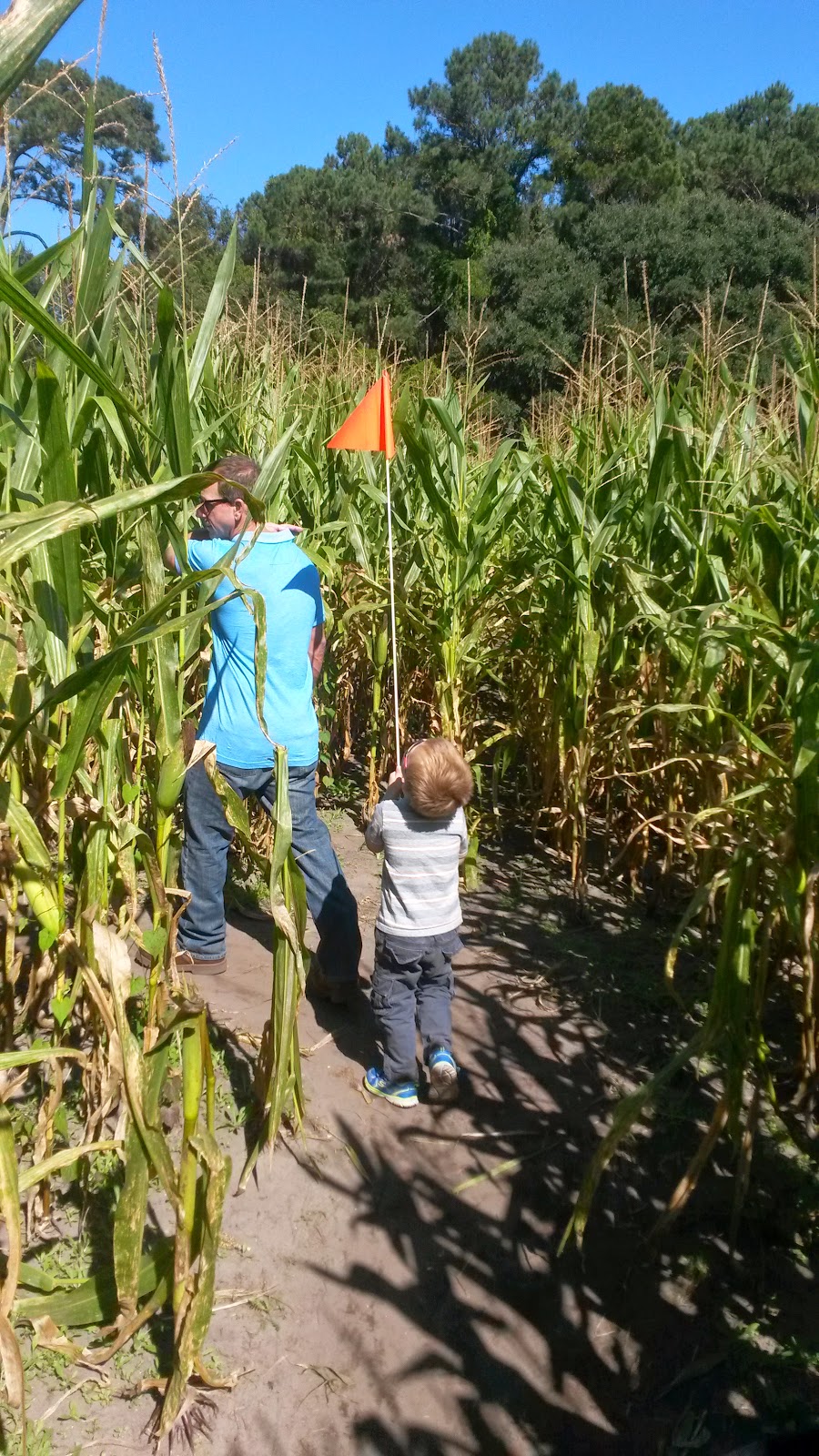 We wandered around in the maze for about 30 minutes before throwing in the towel and heading for the petting zoo.  Last year Andrew didn't really want to touch any of the animals, but this year he was all about it: 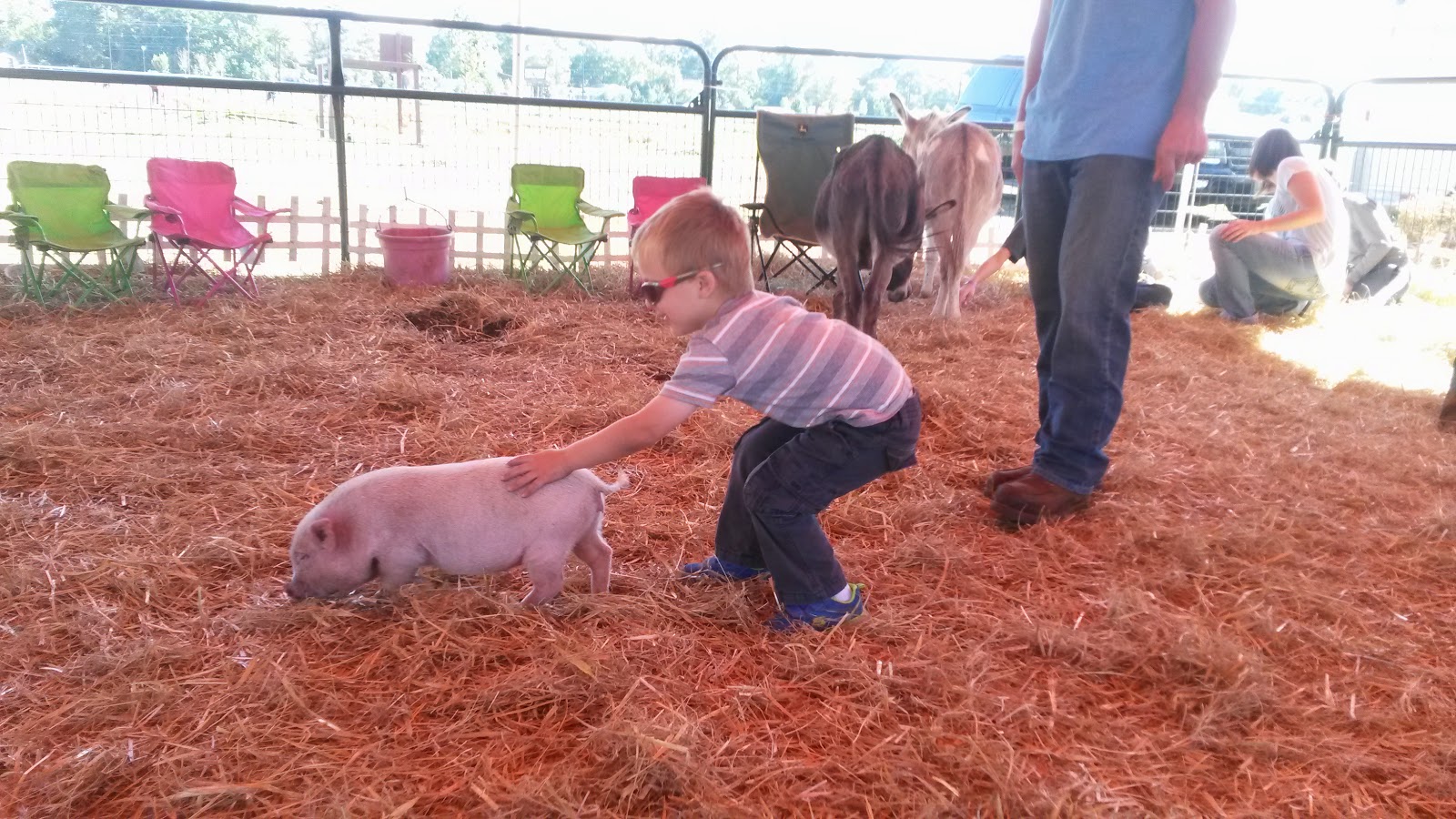 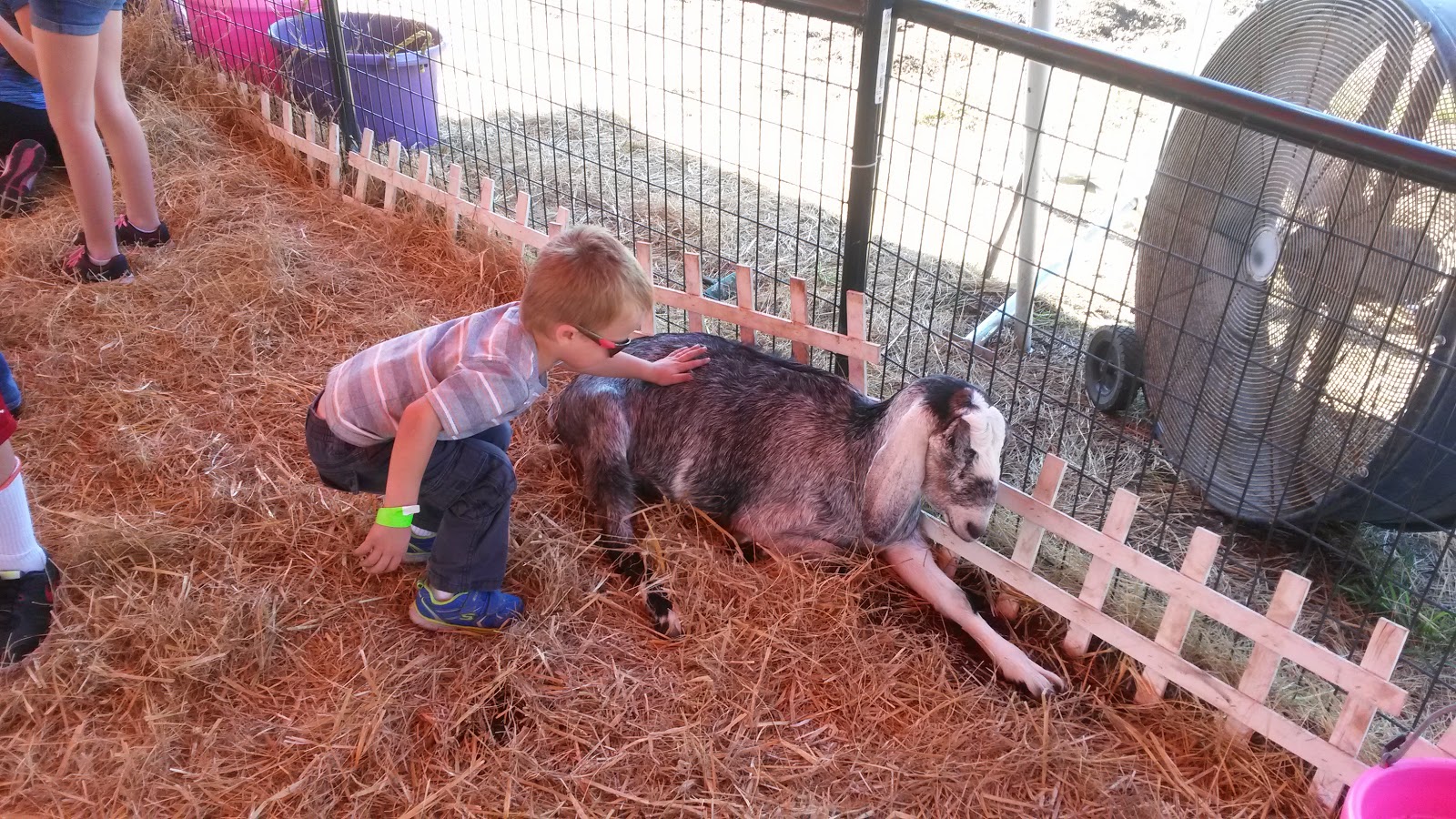 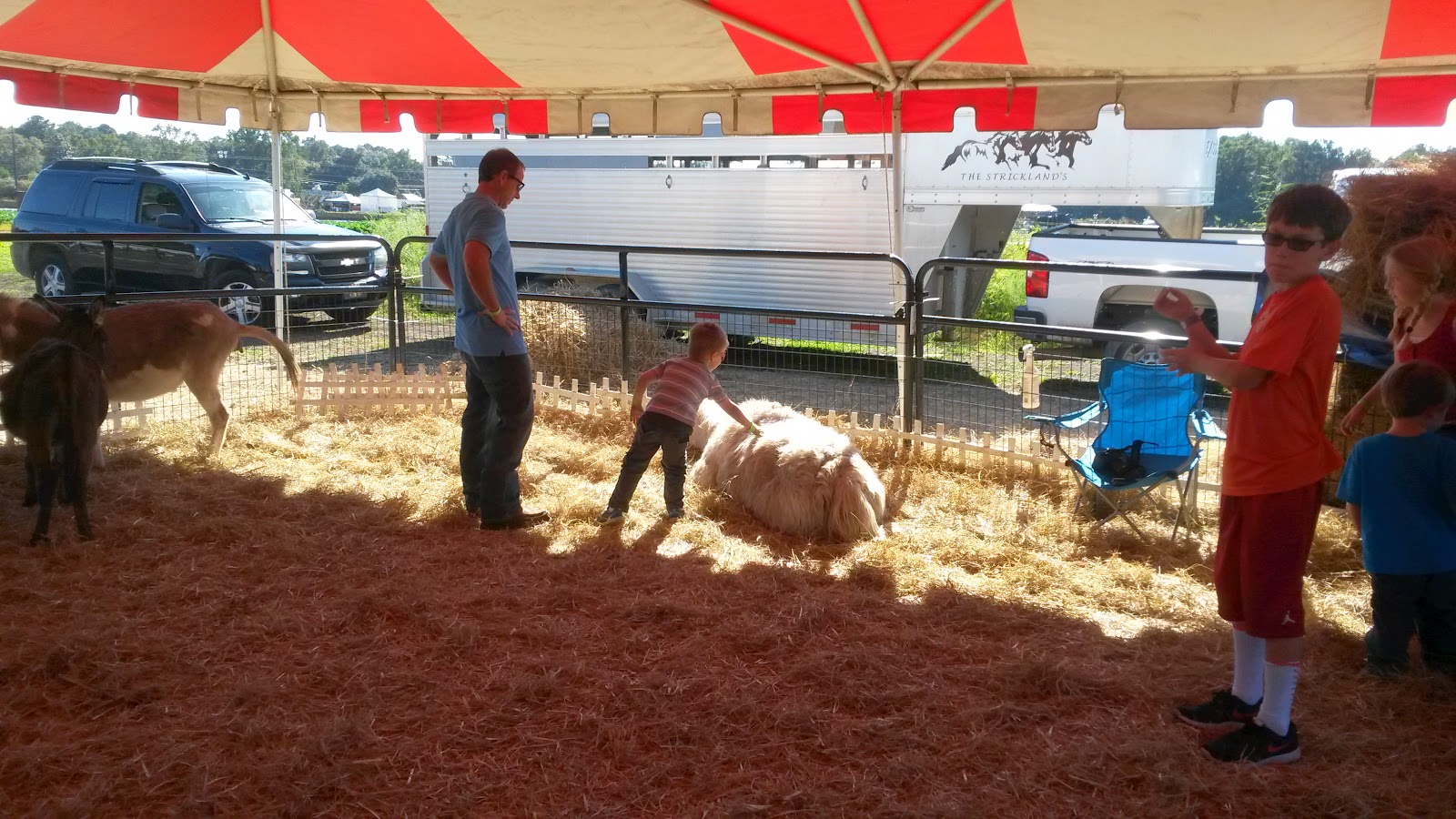 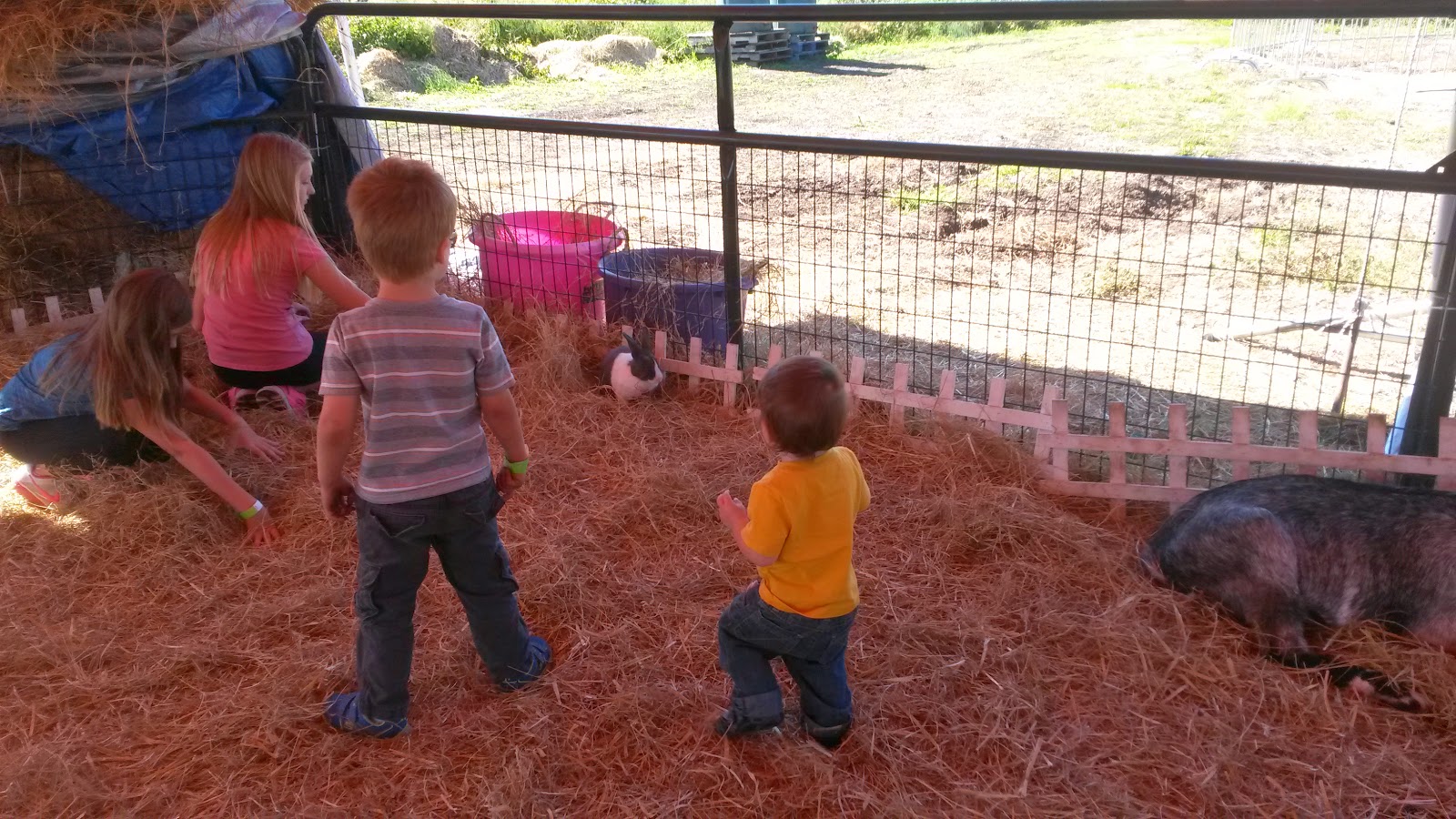 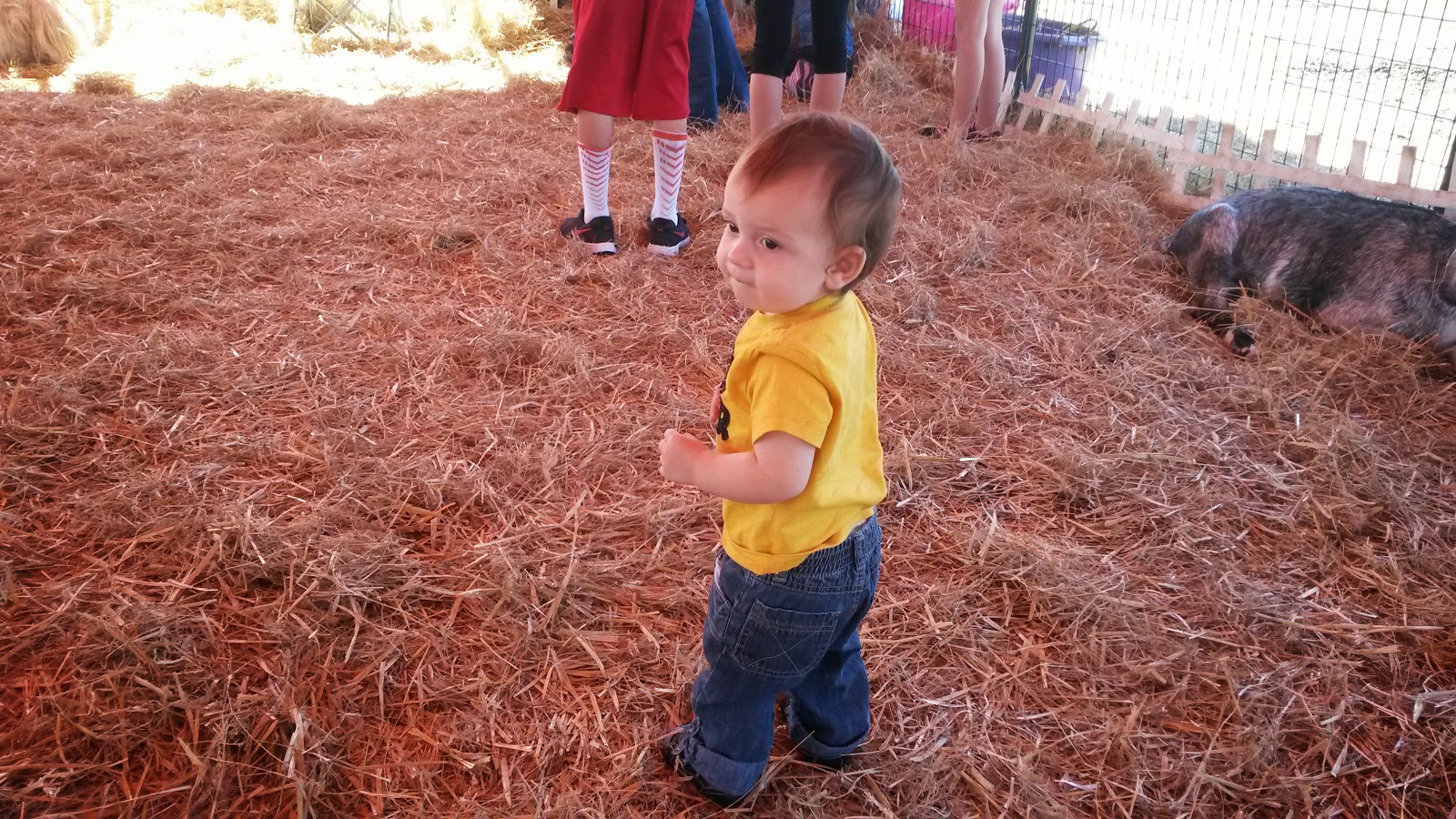 After all of that we headed over to the actual pumpkin patch to look for some pumpkins and take some pictures: 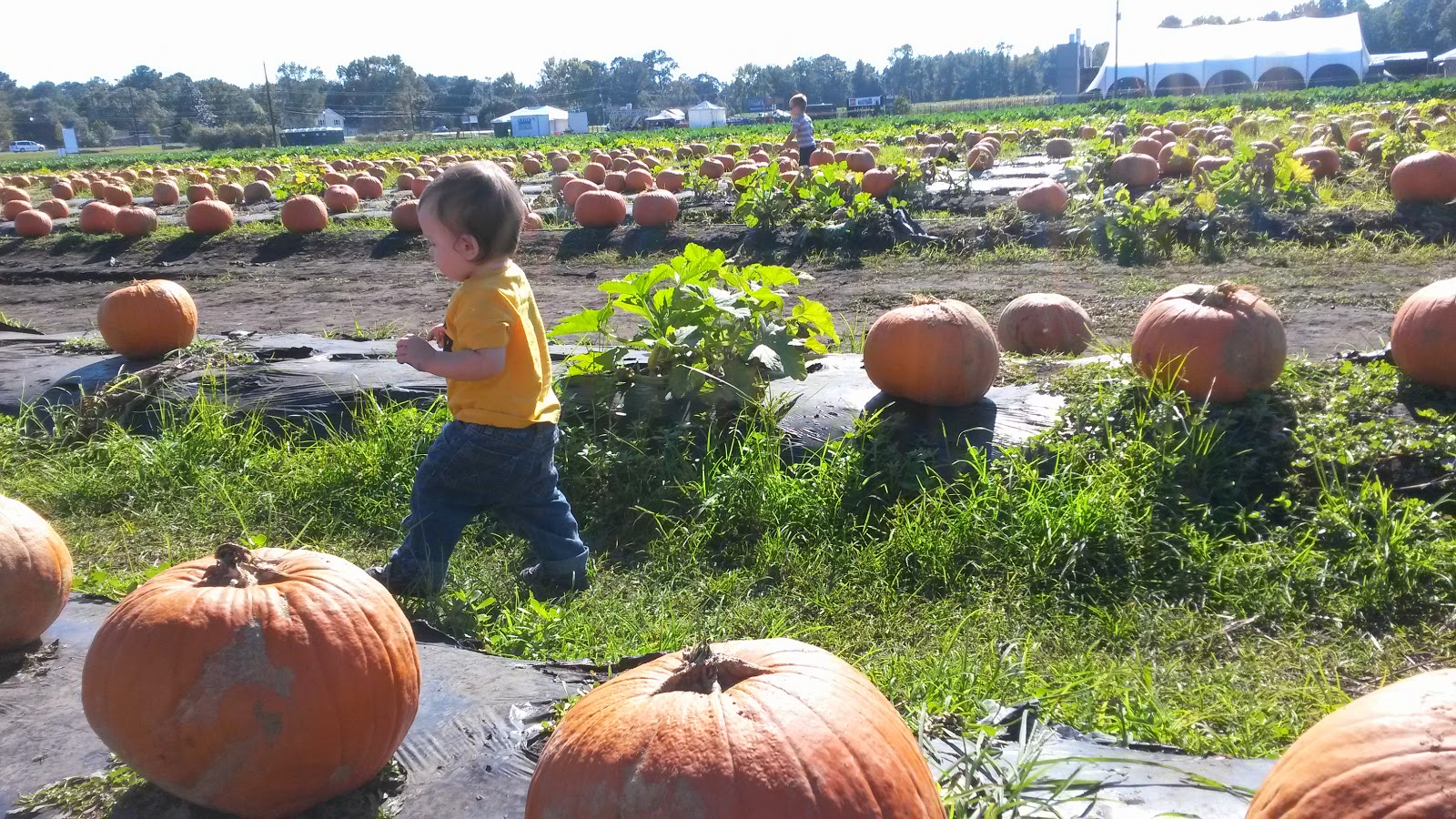 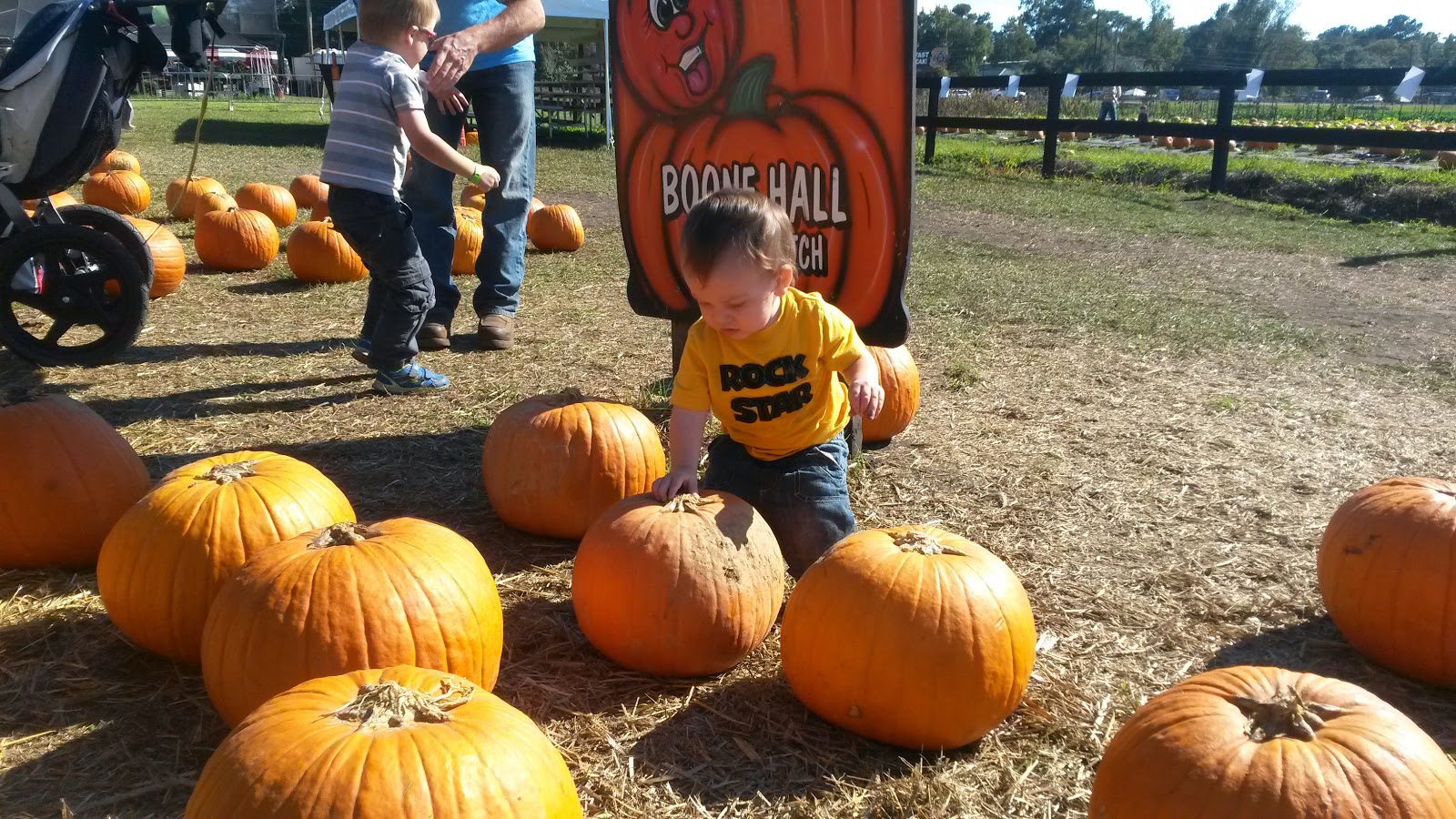 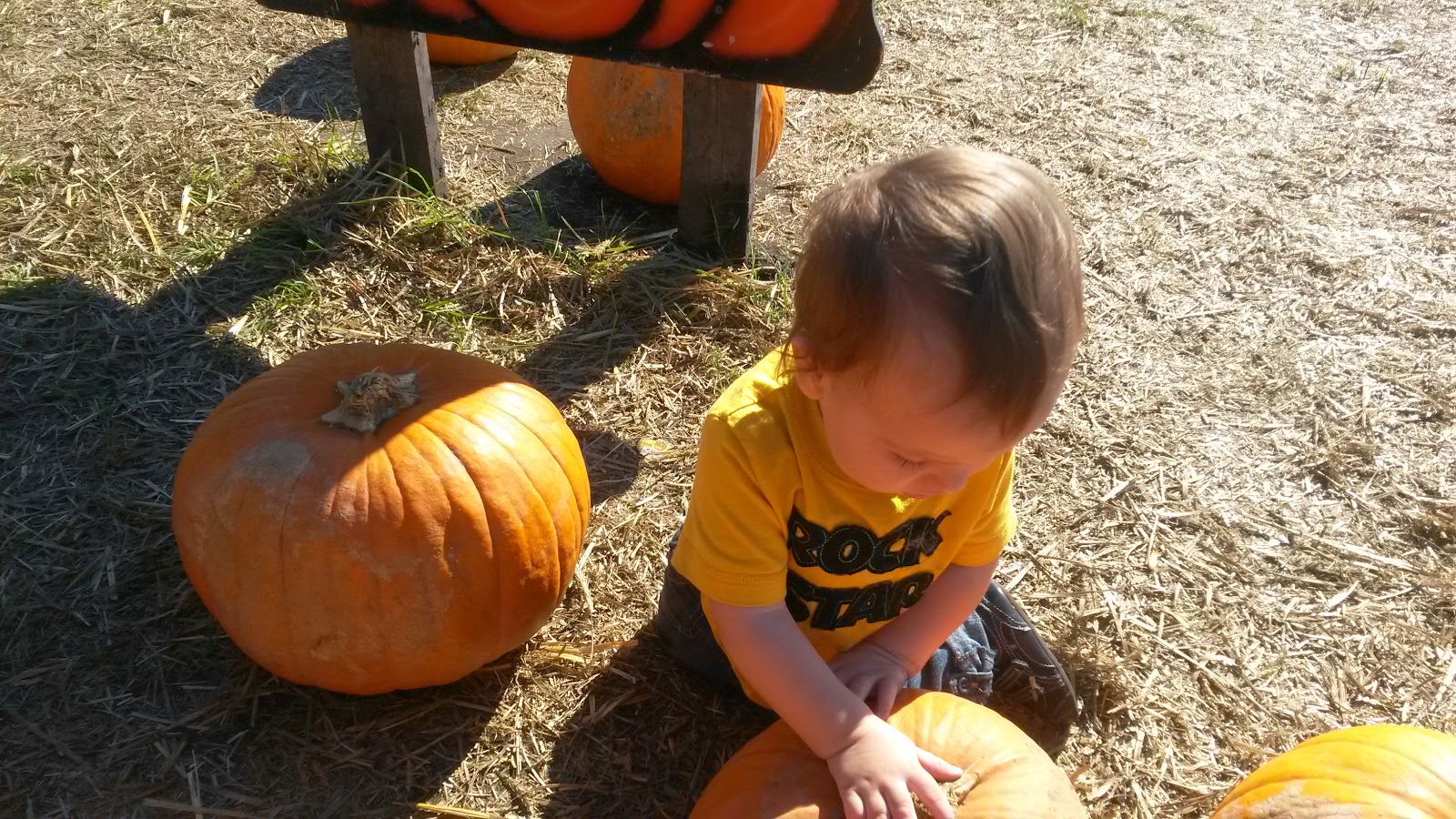 We had to take the same pumpkin picture that we did last year: 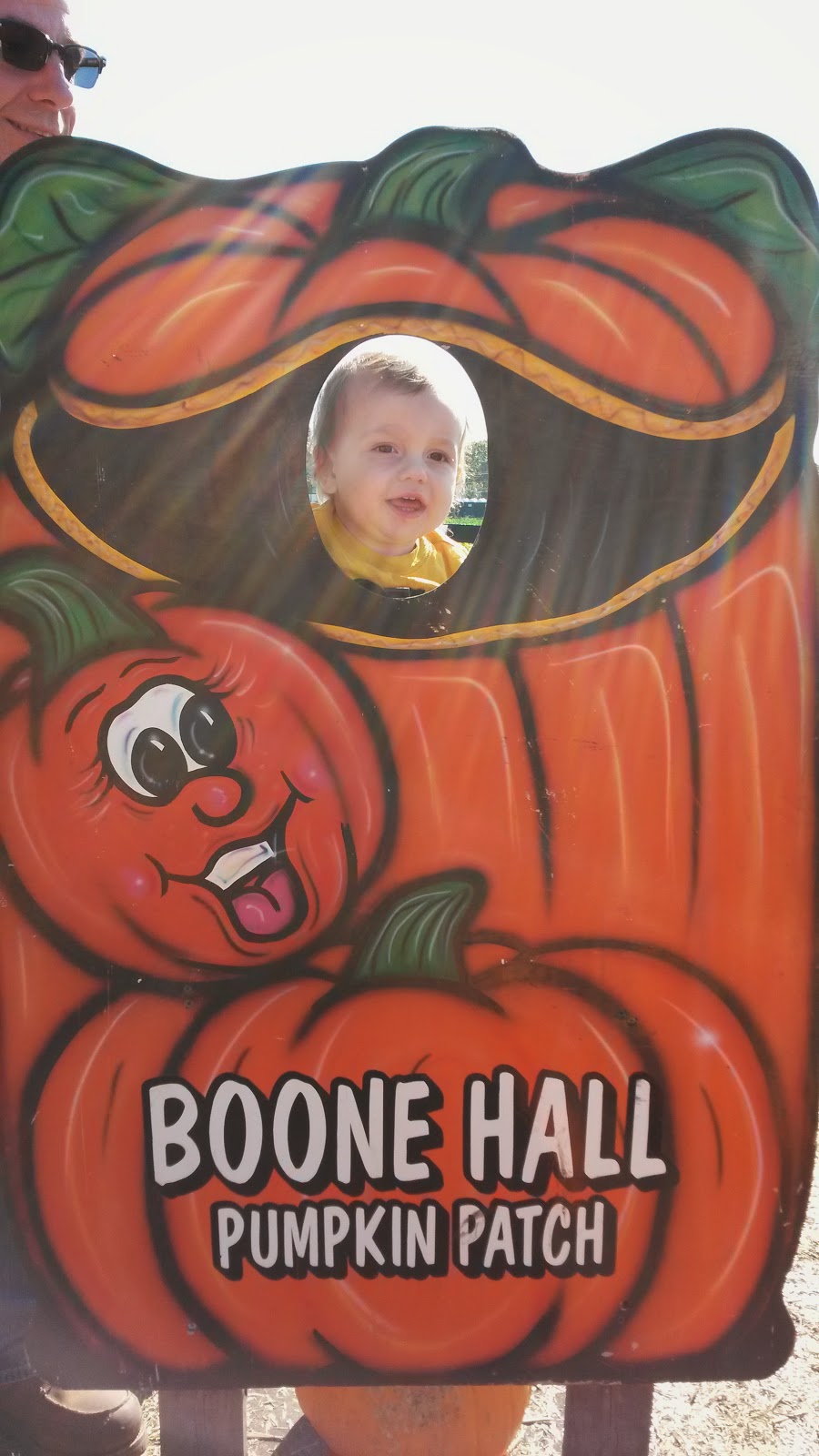 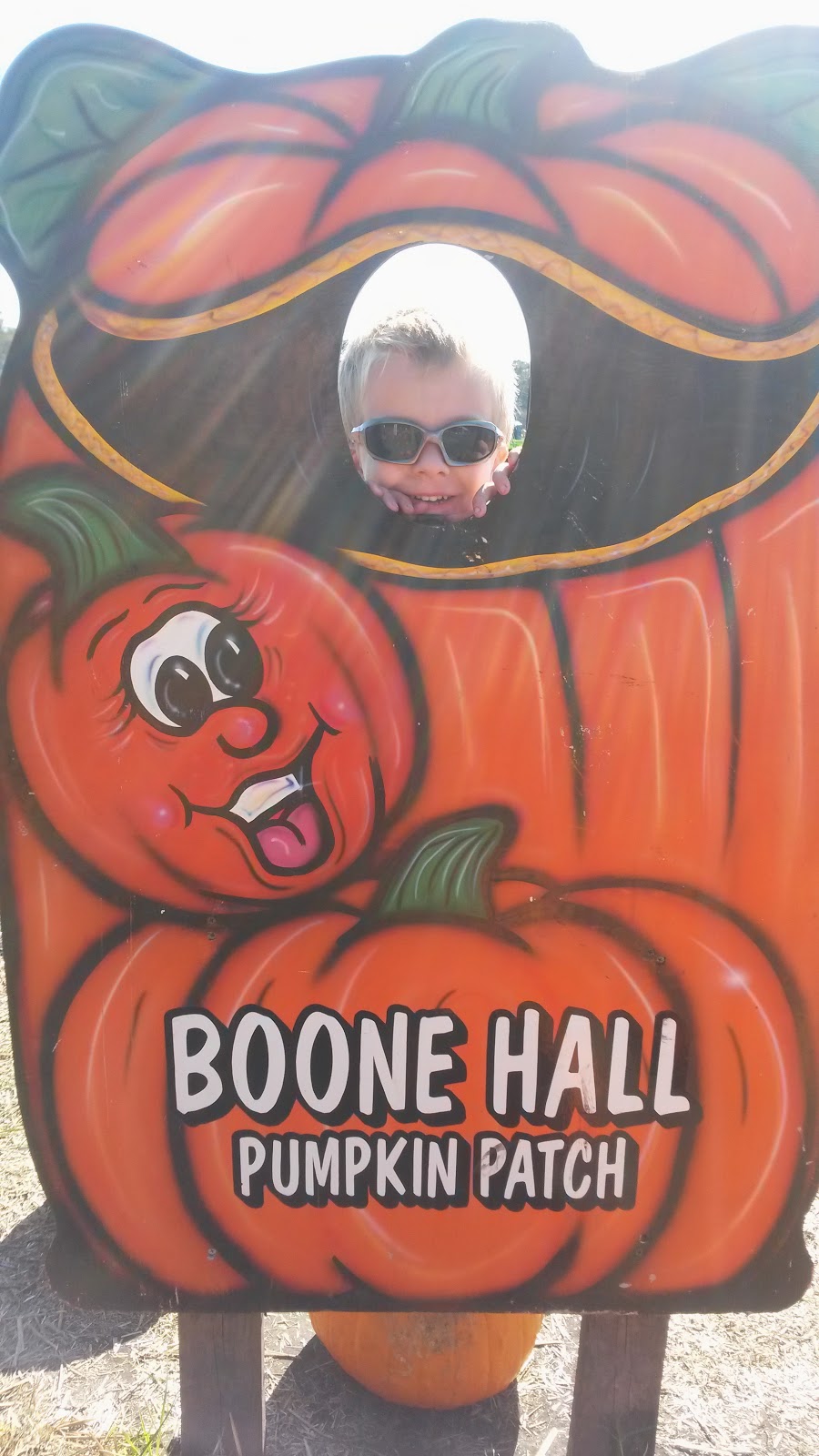 And I made sure that I got a picture of me with my boys: 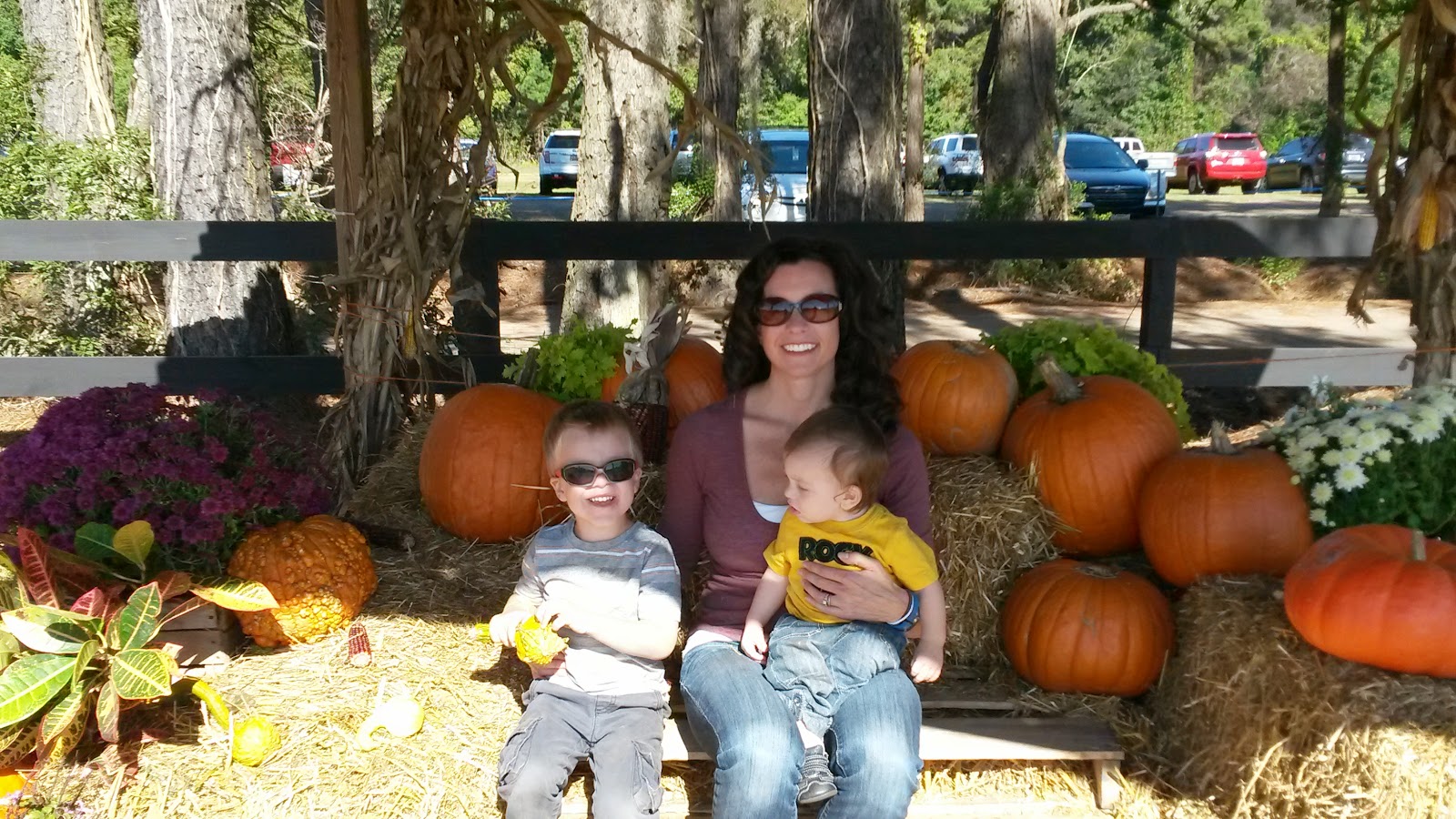 All in all it was a fun little outing, even if it was a little too hot for my liking.  Bring on fall!

Wear a Costume, Just Not The One You Want

Halloween is quickly approaching.  It still blows my mind that next week is the end of October.  I swear every year goes by more quickly than the last.

This year I wanted to be prepared so months ago I asked Andrew what he wanted to be for Halloween. He decided on a pirate and said that Elliot needed to be a pirate, too.  I continued to ask him every week or so to make sure he wouldn't change his mind. Every time I asked he said he wanted to be a pirate.  I thought "Great! I can start getting costumes together.".  Then a couple weeks ago I was looking through the ads in the paper and there was one for Chuck E Cheese's that had a kid dressed in a skeleton costume.  At that moment Andrew became obsessed with being a skeleton.

Thankfully I hadn't gotten anything for pirate costumes besides a toy sword and eye patch that I saw at Wal-Mart for $3.  So I set about looking for skeleton costumes for the boys and came upon these little skeleton jammies on sale. 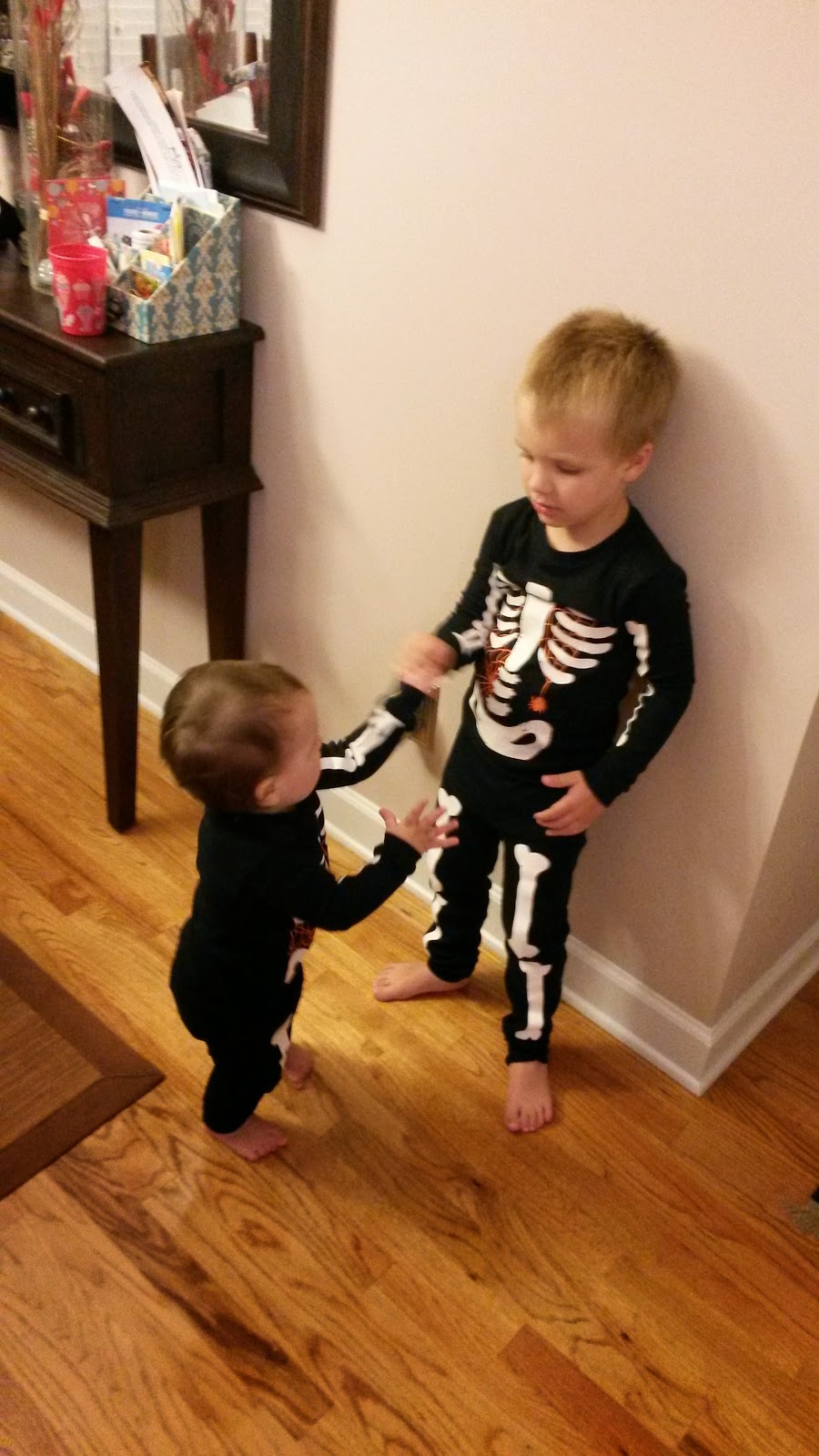 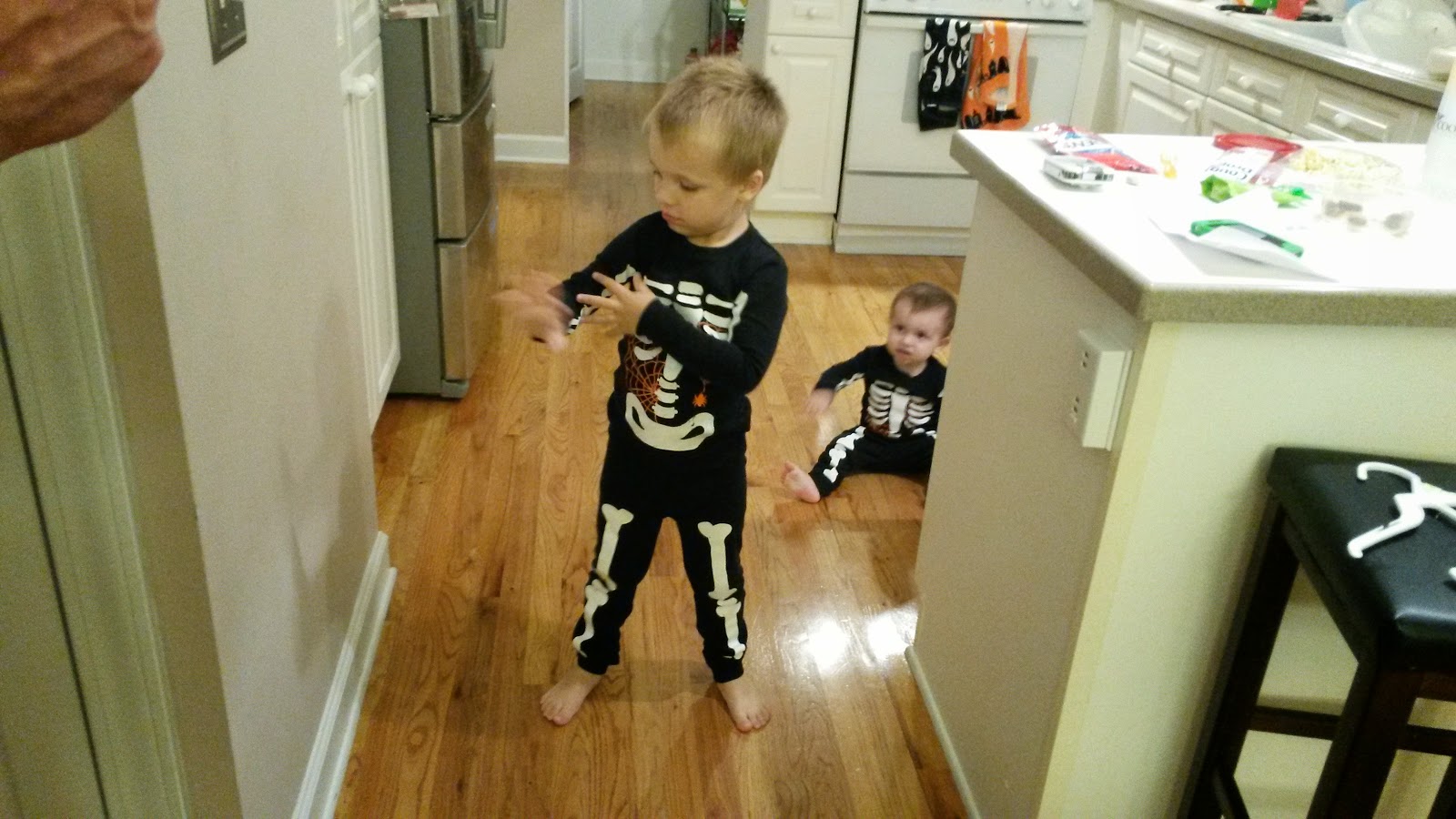 Yes, they are pajamas, but Andrew wore Batman pajamas as his costume last year (and he still wears them).  I told Andrew we can paint his face like a skeleton since I know he would never wear a mask.  I thought "Perfect! For once I'm ahead of the game and have costumes earlier than a few days before Halloween."  We are going to a Halloween party up in Myrtle Beach at the Moose Lodge that my parents belong to and there is a party at his school on Halloween so there are several things to dress up for this year.  I was feeling good about everything. Then I got an email about the "fall harvest" party at his school.

The email included a flyer and on it they said "Feel free to bring your child to school dressed in their costumes. We will have scheduled times for each age group and encourage you to come
and spend time with your child’s class. No images of ghosts, witches, vampires, devils, etc. are permitted."

When I saw that last part my heart sank.  If witches and ghosts aren't permitted I was pretty sure that skeletons would be a no-go as well.  I emailed the director to ask and she confirmed my suspicion.

I'm not sure why.  I suspect it's because Halloween is a pagan holiday and the school teaches christian values so they don't want things that are overtly Halloween-y.  I should have known when they called the party the "fall harvest" instead of the Halloween party.  It seems like if that's the case then maybe they shouldn't have the party ON Halloween.

Anyway, last night I had a talk with Andrew.  I told him that he can wear his skeleton costume for the party with grandma this weekend and for trick or treating, but for his school party he will need to wear a different costume. I asked him if it's ok if he dresses like a pirate for school and he agreed to that.

So now I get to try to come up with a pirate costume that he can wear to school. He has a striped t-shirt that he can wear and I think I'll try to get a cheap pair of pants so I can cut them with a ragged hem. I think I have a pirate hat somewhere from one of my old costumes. Andrew doesn't have boots or a vest, but I'll see what I can come up with before next Friday.  So much for being ready ahead of time...

I guess I should get used to this - conforming to other people's rules for holidays and such.  Hopefully these rules don't lead to disappointment for my kids when they aren't allowed to do what they want. Only time will tell.

It's official. I have signed up to do the Charleston Half Marathon in January. 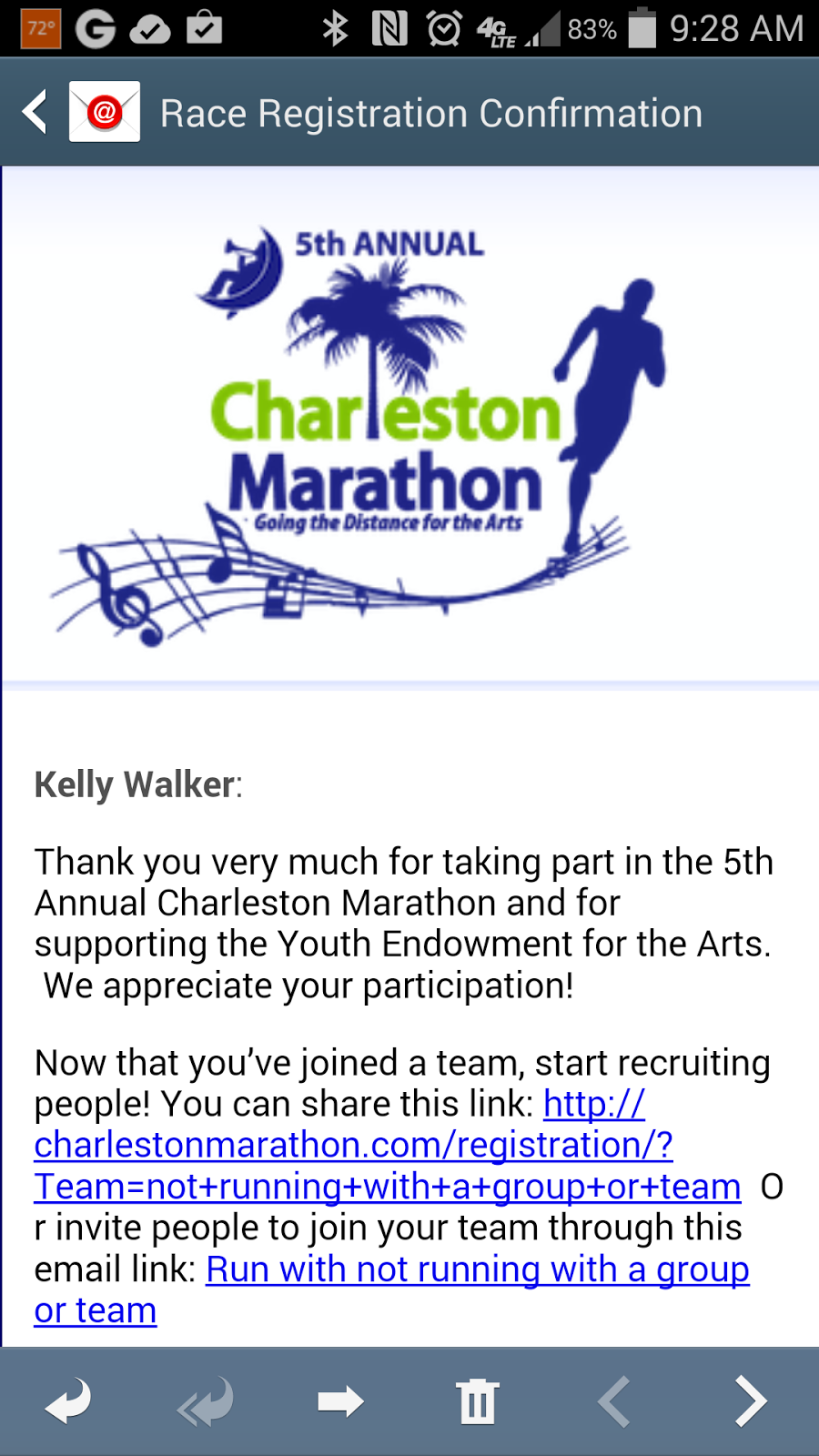 Prior to having any kids I had completed three half marathons (one in Myrtle Beach and the Kiawah Half Marathon in 2008 and 2009). After having Andrew I wanted to do another one, but I couldn't seem to find the time to actually train.  Before I could really think about doing it we decided to have another baby and then I was pregnant with Elliot.

While I was pregnant I continued to run as much as possible, but I had to give it up around 26 weeks due to too much discomfort. With Andrew I was able to make it to 36 weeks, so I was disappointed that I had to give up so early the second time around.  I gained more weight during my second pregnancy, and that wasn't easy to swallow.  I also felt like it was harder to drop the weight the second go 'round, and that did not help my self esteem.  I haven't felt good about myself or comfortable in my own skin since getting pregnant the second time.  People would tell me that I looked great, but I didn't feel like it.

There is also the issue with finding time.  I work full time and the boys are in daycare and school Monday through Friday.  I feel like since I am not with them all week I need to spend all the time that I can with them. It's led to feelings of guilt on my part.  To take time away from them to train has felt selfish.  Over the last couple months, though, I've come to realize that it isn't selfish if it makes me feel better about myself. I will be a happier mom and that in turn makes me a better mom.  Running has always been a stress reliever for me. It gives me time to clear my head and focus on me.  After a good run I am more relaxed - I feel better mentally and physically.

All of that led me to my decision to sign up for the race in January.  It gives me something to work towards and forces me to take some time for myself.  It won't all be by myself, though. I got J to agree
to get a used Bob Revolution Duallie stroller so I can do more runs with the boys as well. We already had a Baby Trend Navigator double stroller, but it's clunky and not easy to steer if you have to lock the front wheels (which you have to if you're going to run with it).  I found a Bob on a local B/S/T page and scored it for $300 (which included the parent console, rain cover and snack trays). My first run with it proved to me it was worth every penny. 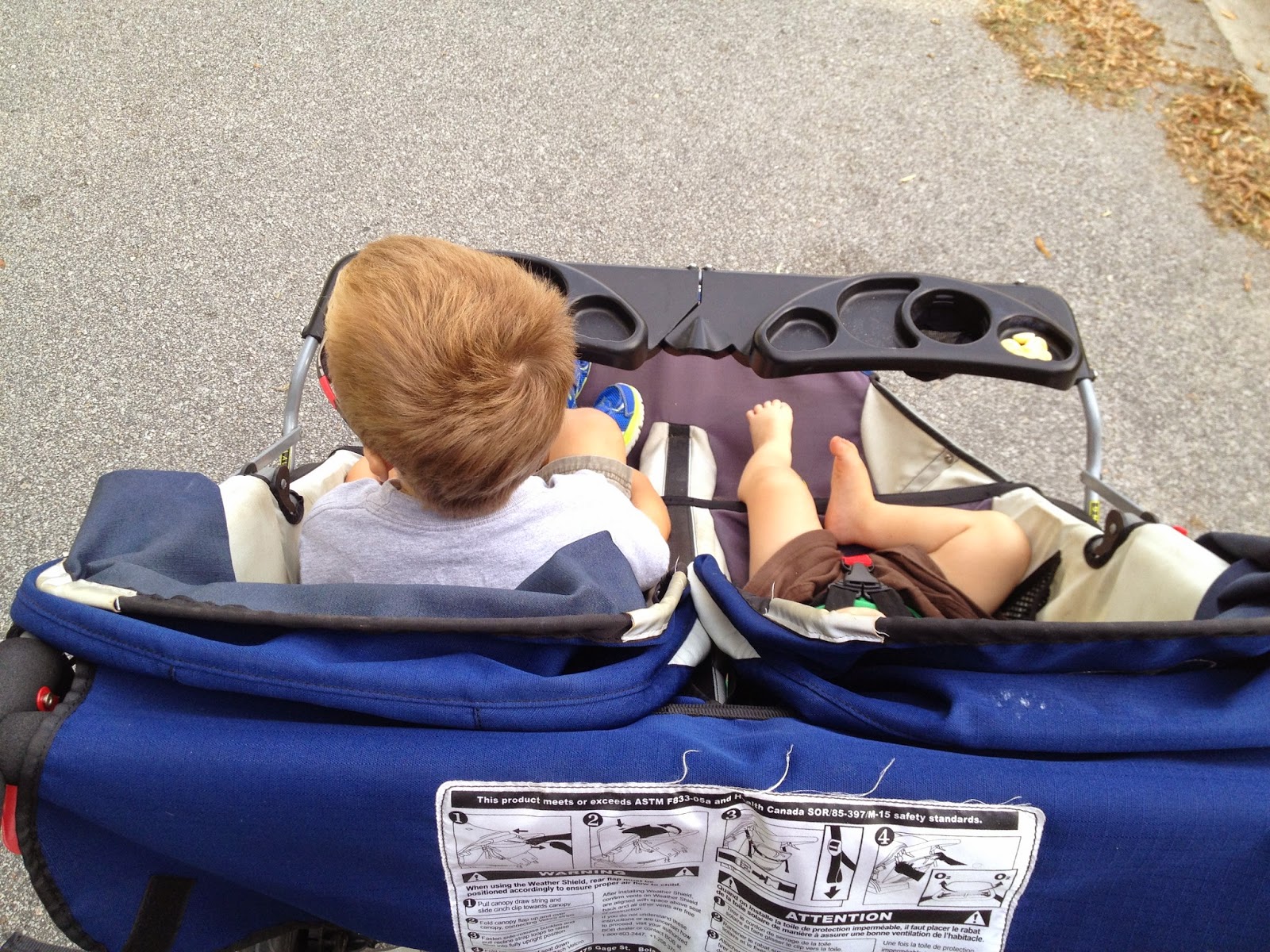 So now if need be I can do some of my shorter runs with the boys. I'll probably be doing my longer runs solo.

Last night I did my first official training run. I messed up when I made up my training schedule and thought I didn't start until next week. Oops.  Anyway, I decided to knock out my five miles while J went to go pick up the boys.  All in all I think it went pretty well: 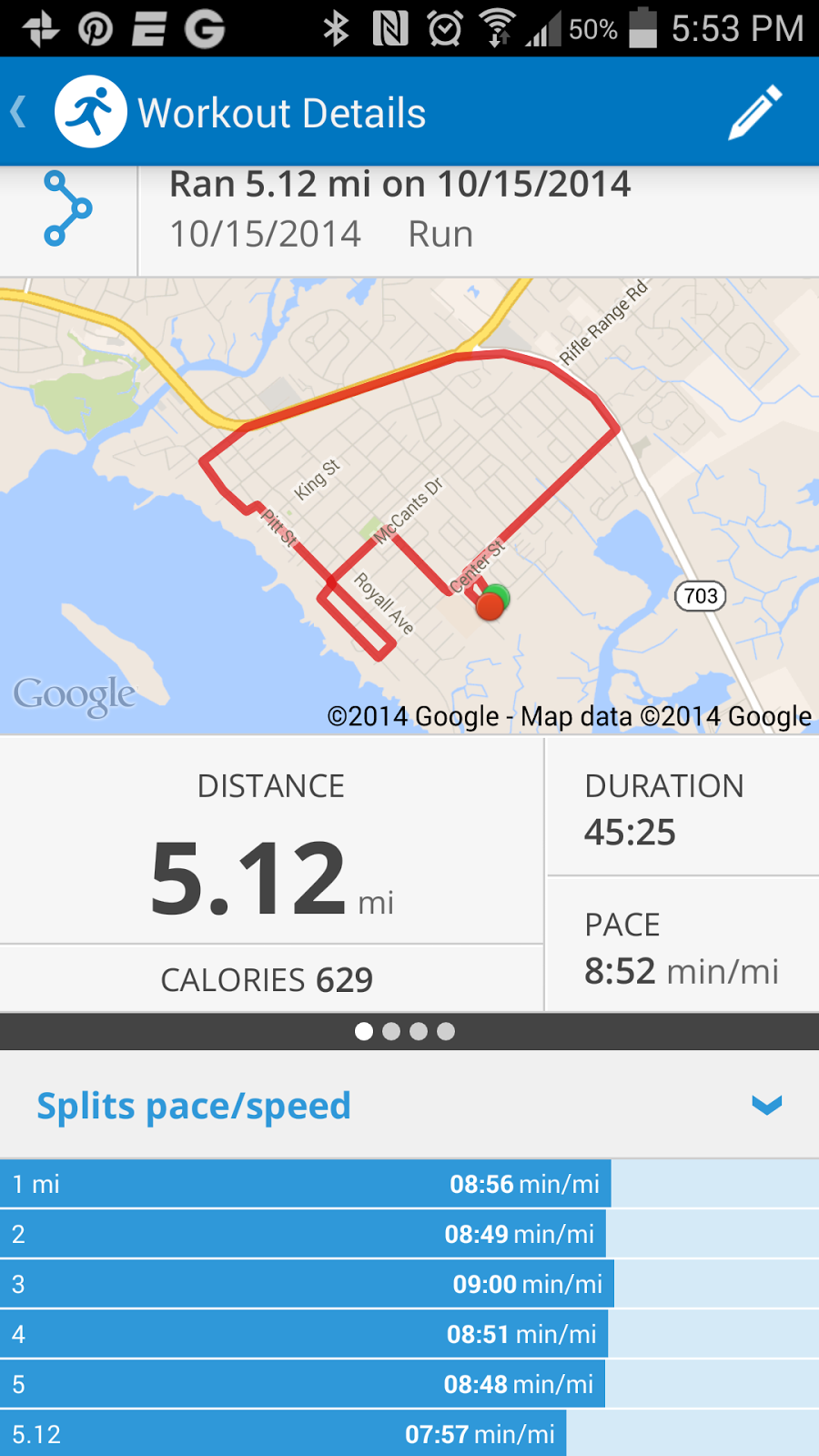 And the timing was perfect. I ran around the corner to our house just as J pulled up with the boys.  So I got my run in and didn't even sacrifice any time with my boys.  My training schedule has my runs on Tues/Thurs (long)/Sat, but since J picks the boys up on MWF I will most likely shift them to those days.  My plan going forward as the long runs get longer will be to work from home on Wednesdays so I can get started by 4:00 and be done by 6:00 at the latest.  That way I can do my training AND be there for my boys.

So in less than 14 weeks I will be completing my 4th half marathon. I'm hoping that by that point I will be ready and that I'll still be smiling.