Pittsburgh's going to the Super Bowl.  And so are Baby W and I!

Yep - that's right.  My sister (the one who is ridiculously irresponsible with money) is taking my parents, my other sister and I to Dallas for Super Bowl XLV.  She had bought 4 tickets prior to the AFC Championship game with an escape clause if the Jets happened to win.  I told her to take our other sister since I got to go to the Super Bowl in Tampa two years ago with her.

Well, she got another ticket so I could go, too. I told her not to spend the money, but she really wanted to do this.  There is no way in hell anyone else in my family could afford to buy a ticket (It was $21K for the original 4 tickets), but Nic is a doctor who has been doing the whole locum tenens thing and apparently has been raking in the dough.

So we will be flying to Dallas on Saturday afternoon - getting  there at 2:30 - and flying back Monday evening and getting home around 9:40.  Not sure if we have a hotel yet so we should probably get started on that.

I think J can't believe that I am going to get to go inside JerryWorld (Dallas stadium) before him. He is a HUGE Cowboys fan so he's a little bitter.  I told him he should root for my team, but I don't see that happening. Now I just have to hide my Steelers gnome so he doesn't try to jinx it.


Here is a picture from the last time Pittsburgh was in the Super Bowl. 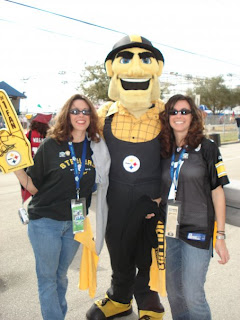 Nic and I with Steely McBeam
Oh - and on a baby related note I bought our crib bedding this morning. Target is having a 20% sale on select bedding and furniture online so I went ahead and got it.  It's a higher priced item and I didn't know if anyone would buy it for us. Plus the shower isn't until March 12th and I want it before then. It will also help with decorating if we have it and know the colors.  I can't wait until it gets here!