8 months? Wow, to say time has flown is an understatement!! 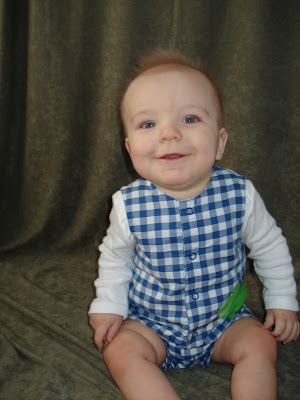 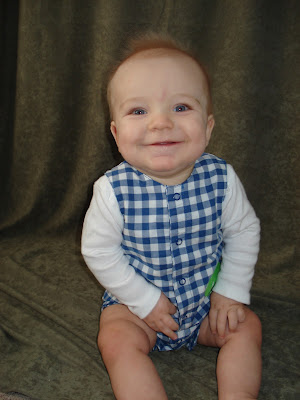 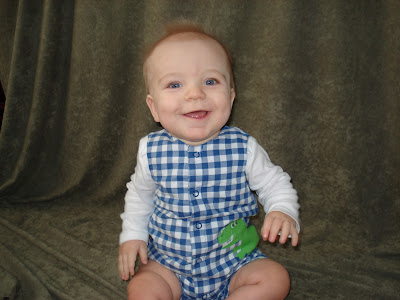 Stats:  When he went for his second flu shot on 11/9 he was 18 lbs with his clothes and diaper on, so I am guessing he is right over 18 lbs.

Size (diapers, clothes, etc.):  He is in size 3 diapers and wearing some 6 month outfits still.  I was happy for a little warm spell that allowed me to put him in some of the 6 month outfits he had never worn. I think I went a little crazy with the clothes shopping for him before.  He is in 6-9 or 9 month sleepers, but nothing 12 months yet.

Sleeping:  He is pretty much back to sleeping through the night, but he does fuss a couple times a night. I let him go for a couple minutes and normally he'll soothe himself back to sleep.  There have been a handful of times the past few weeks where I've had to get up and feed him.  We've started giving him a 5 oz bottle before bed to make sure he is getting at least that much and it seems to be helping with sleep.

Eating: I've been able to get back to EBF with no formula for the past few weeks.  I keep trying different foods with him and he does phenomenal with the purees, but he is terrible with "real" food.  He gets chunks in his mouth, but then he gags and throws up. He even puked all over with mashed potatoes on Thanksgiving.  I guess I have to keep trying and eventually he will learn how to swallow bigger bits of food, but it's very frustrating.  He still loves sweet potatoes and he's now had a blueberry/apple mix and the banana/apple/pear mix. He's tolerating the fruits more now, but still prefers veggies.

Milestones:  He cut his second tooth and is now sitting like a champ. Just today he sat there for 20 minutes playing with different toys. I was so proud.  He's getting up on his hands and knees and rocking back and forth, but still no crawling (which I am fine with!).  He's getting great at eating puffs and perfecting his pincer grip.  He also has sat in a restaurant high chair and a shopping cart and done great.

New adventures:  We did another 5K with him on Thanksgiving and for the first time had someone other than us put him down for the night while we went out to dinner to celebrate my birthday.

Favorite toys and activities:  He loves the around-we-go and the jumperoo. He now loves the giraffe toy that was hanging in the car for him and has discovered how to turn on his crib soother all by himself. His favorite activity seems to be crumpling up whatever newspaper J is reading at the time.

Funny happenings:  While I was shopping with him and my friend, Colleen, the other day he decided to test out his new sounds. While I was pushing him around in the cart he started squealing and yelling "Da da!!"  Thankfully he wasn't crying and the people that would pass us were smiling. I love that he's such a happy little guy   :)

What I'm looking forward to:  Pictures with Santa and his first Christmas.
Posted by kjw at 4:57 PM