One year ago we were gearing up for our anatomy scan and were waiting to find out just what was in there.  The anatomy scan was November 30th, so this day last year I was anxiously counting down the hours.

Part of it was nerves at finding out if our baby was healthy and growing the way he should. The other part of the nerves were finding out the sex.

I've gone back and read some early blog entries where I had said that I was hoping for a girl.  I don't know why that was. I think it was because I grew up with two sisters and I have two nieces. I knew nothing about little boys so I was apprehensive.

The weeks leading up to the anatomy scan I just had a feeling that he would be a boy. I had a dream about it a few weeks prior to the appointment and I really just had this gut feeling. I knew it would be a boy.  I had said I was mentally preparing myself for it to be a boy and to try to be excited.

As soon as he popped up on the screen there was no denying he was a boy.  And in that instant I was so happy to see a healthy baby and I was truly happy to find out we were having a boy. I'm not sure what changed in that instant - I can't explain it.  As soon as I found out who he was I fell so much more in love with him.  Seeing his little profile up on the monitor was magical for me.  We didn't have a 3D u/s, so there wasn't a ton of detail, but I could see his little nose and lips. And watching him wave at the camera and kick around was something I will never forget.

On the way home from that appointment my mom called to check and see how it went and what we were having. When I asked if she was ready for her first grandson she was thrilled, but then she asked if I was ok.  It seemed like such an odd question to me, but I know it's because I had previously expressed my hope that it would be a girl.  I assured her that I was very happy - and I was. I still am.

When I look at his sweet smiling face I can't even fathom him not being just who he is.  I have no idea why I wanted a girl or what I was thinking.  He is my perfect little man I wouldn't trade him for anything in the world. 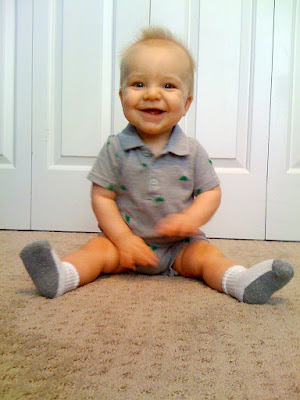