For the first 25 years of my life, when I lived in PA and KY, snow was a normal part of every winter and something that we were used to.  Since I moved to SC in 2002 that hasn't been the case.  I know the year I lived in Columbia we had an ice storm and everyone freaked out and didn't want to drive.  I didn't think anything of it - I mean come on, I got my drivers license in January in PA with snow on the ground.

Four years ago we had a nice little snow storm during the opening ceremonies for the winter olympics.  I only remember when it was because J had to keep going out and brushing snow off of our dish because we had DirecTV at the time and the reception kept going out.

That brings us to now and the third winter storm since I have been living here.  I know everyone up north has been dealing with buttloads of snow and they laugh at us down here for getting worked up about a little storm. Honestly I think it's ridiculous, too.  But I guess down here we aren't really prepared with tons of salt trucks and all the other things that can be done to prepare.

So yesterday schools closed after a 4 hour day, meaning daycare closed at lunchtime. I worked from home so I could at least get some work done in the morning before going to get them.  The precipitation was supposed to start around 3:00, but we didn't get anything until probably after 6:00 and that was rain.  Soon it turned to freezing rain and was coating everything.  They ended up closing the Ravenel Bridge and not too long later the Don Holt Bridge - so there was kind of no way out of Mt Pleasant, where we live.

We went to bed hoping our power would stay on. It dipped a couple times and it did go out for a minute, but came back on with no problems. Every time I had to get up with Elliot I looked out hoping to see at least a little blanketing of snow.  Nope.

This morning I got up at 8:30 and heard the freezing rain/sleet hitting the sky light in our room.  Came downstairs and there is the slightest bit of white stuff out there. 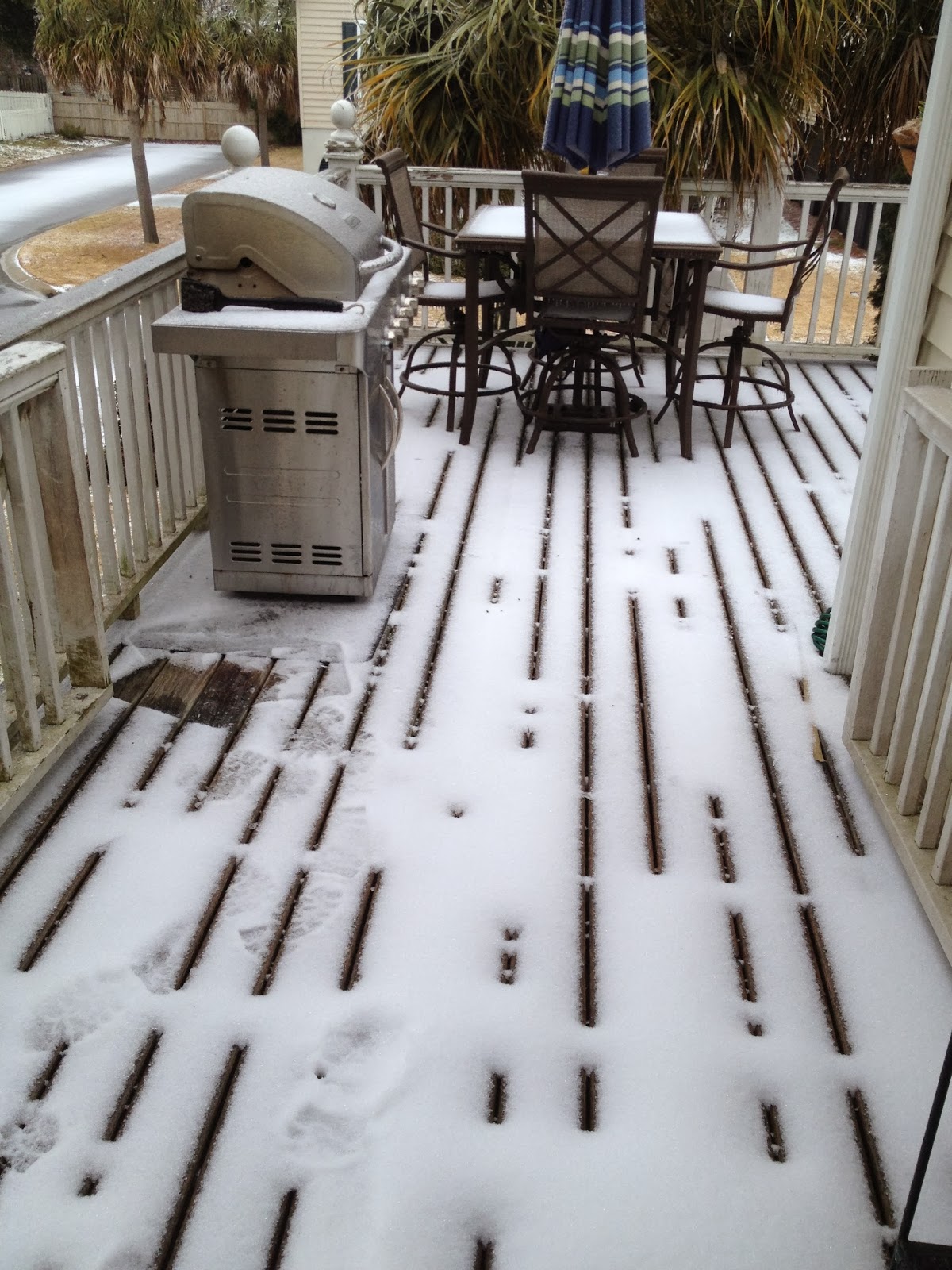 I was really hoping after all of the hype that there would be something more impressive. Or at least some real snow and not just ice.

Either was Andrew wanted to go outside to play in it. I felt bad because I'd been talking about snow and he was so excited. He actually cried yesterday when we went outside and there wasn't any yet.  So we got him into his winter coat, threw on his rain boots (we don't have snow boots) and convinced him to wear some gloves.  J took him down to the back yard while I got Elliot bundled up so we could join them for a little bit: 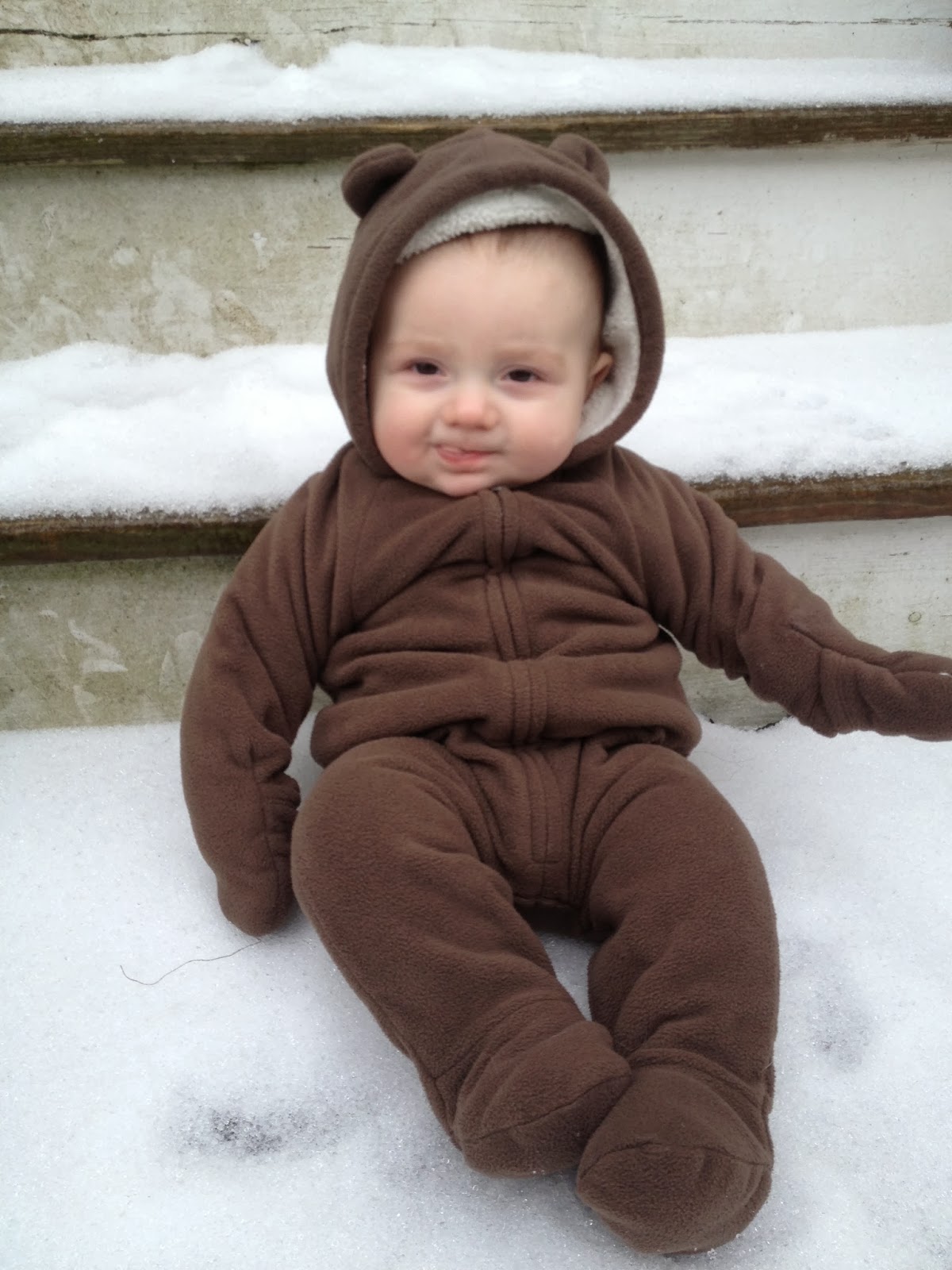 We made our way to the back yard and watched as Andrew ran around picking up the ice chunks that J was knocking off of the palms trees.  The dogs were running around and kicking up the ice balls that were all over the ground: 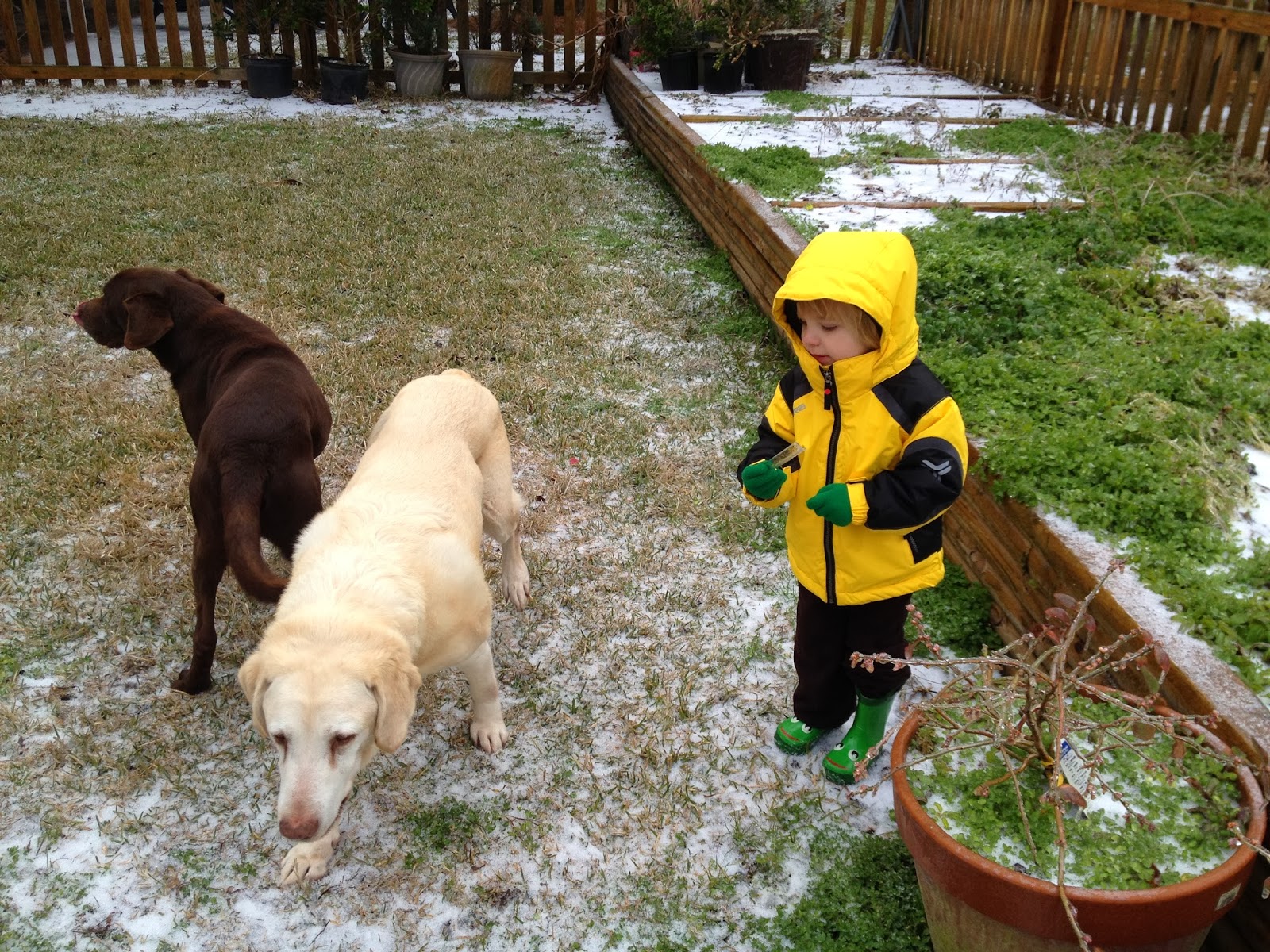 We didn't stay out too long, but I wanted the boys to experience their first "snow". We don't get it very often here so we needed to enjoy what we could: 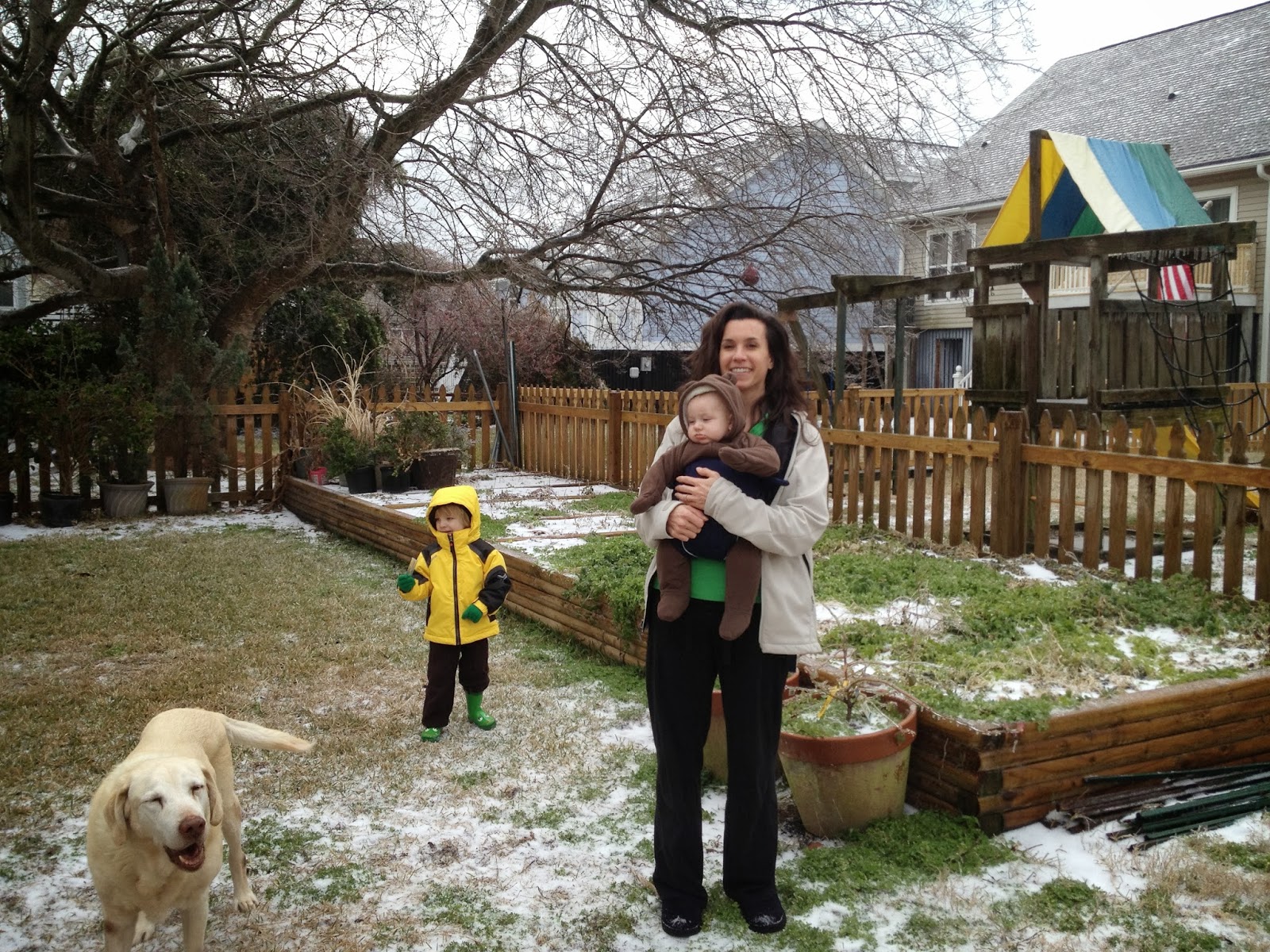 Tomorrow will be another work from home day because the schools are still closed, which means daycare is also closed. It never got above freezing today so nothing really melted and anything that did melt is going to freeze back up tonight.  I'm not sure if the bridge is open but even if it is J doesn't want me driving on it if it's iffy.  So I guess we'll have another day at home tomorrow. Now to try to find some things to do with Andrew in the house since it's too gross to be outside and he's getting a little stir crazy.