One week ago the unthinkable happened in my city.  A monster walked into the Mother Emanuel African Methodist Episcopal church and joined in their Wednesday night bible study.  He spent an hour sitting with 12 good Christians after being welcomed into their group.  Then he did something that I still cannot wrap my head around - pulled out a gun and killed nine of the church members, including the pastor.

I had gone to bed early that night so I didn't see the the news until I woke up on Thursday. The first thing I do when I wake up is look at the weather on my phone.  Before I could get to that I saw the headline from CNN and my heart dropped.  As I began to read more details I started to feel sick.  All mass shootings are horrible and heartbreaking, but this one is especially awful.  This wasn't just some nut who randomly took out a bunch of people. This was a young man so full of hate that he targeted a historical black church in the hopes of starting a race war.

I got to work and began watching coverage online. We all breathed a sigh of relief when the monster was caught up in Shelby, NC, but we were also all on edge waiting to see what would happen.  Would he get the race war that he wanted?

Over the next few days something amazing began to happen. Instead of being torn apart my city began to come together.  Friday night there was a prayer vigil downtown. I couldn't make it down there, but I watched the live stream of it.   I was in tears over and over again as I watched the coverage. Sunday morning Emanuel AME's doors were open for the church service. Again I watched the coverage and sat in awe as I listened the words of forgiveness and love. 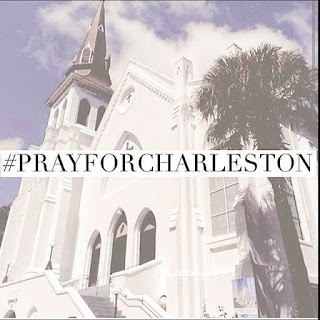 Sunday evening there was an event planned to show some unity in Charleston.  The Bridge to Peace - Unity Chain for Emanuel AME Church was organized in an attempt to get 3,000 people to stand holding hands to span the bridge.  It was first discussed on Friday in the mom swap group that I am a member of and then by Saturday I saw it as a news story  on the local news site.  I told Jonathan that I needed to go to it. I had to do something.  I originally wanted to take Andrew with me, but it didn't start until 7:30 and it was still over 100 degrees so I thought maybe I should go without him.  I met up with Andrea, Marc and Jennie and we headed over to the bridge.  As we got close I started seeing groups of people walking towards the park.  I knew that there was going to be a good turnout based on the number of people who had responded saying they were going on the facebook page, but I was taken aback by just how many I was seeing.

I parked my car and called Andrea (they had been following me and got caught at a light).  They were over by the base of the bridge so I headed that way. I passed the park where there were thousands of people already gathered and headed over towards where my friends were waiting. I weaved my way through the huge crowds on the sidewalks, tears welling up in my eyes as I saw the signs that people were holding and the emotions on people faces.  I was so proud of the turnout and of the peaceful nature of the gathering.  We were so far back in the crowd that I was fairly certain we wouldn't make it up onto the bridge and I was right.  As the crowd moved forward we made it towards the base of the bridge and we stood in the middle of Coleman Blvd since they had traffic blocked off.  We stood among the crowd and took it all in. 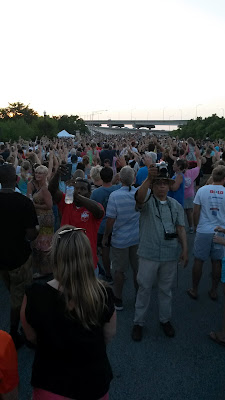 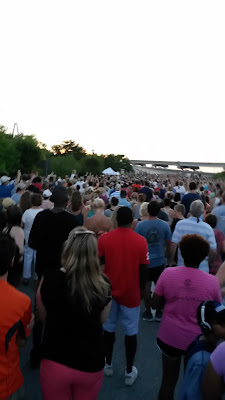 We took part in the moment of silence and stayed until people started to be herded back to their cars. I made my way back through the crowd and on the way back to my car I struck up a conversation with a lovely woman named, Dana.  I again welled up with tears as we talked about how we were feeling about everything.

After  I got home and showered (it was so hot and muggy that night) I began to look online at the photos people were posting about the event and I was again in awe.  To see my city come together instead of being ripped apart by the hate of a deranged man was indescribable.  The love and support that I have seen throughout our city has been nothing short of amazing.  There are very deep wounds here that will take a very long time to heal, but I have hope that we are headed in the right direction.

I pray the names of those beautiful souls that were lost on June 17th are never forgotten: