Baby W is already not listening to mom and dad

Today was the NT scan and I have to admit that going into it I was a bit of a nervous wreck.  I was telling myself that everything would be fine, but of course in the back of my mind was that fear.  Mostly I just wanted to see the baby and the heartbeat to know that everything was ok.

On the way to the appointment I was chugging water like a champ. We got in there and I hopped up on the table. Kelsey (our tech) commented on my nice full bladder once she had squeezed the goo on my belly  and started looking around.  It took just a second and the image of Baby W popped up on the screen. She instantly commented on the heart beat and brought it up for us to hear. Music to my ears!  It measured at 164 bpm which she said was great.  Huge sigh of relief.

Then she started trying to get the important measurement, but baby was having nothing of it.  S/he was nice and curled up, arm behind the head, legs in the air, chin tucked in.  Every once in a while we got what looked like a little wave as if to say "Go away with that wand - I'm relaxing here!"

Kelsey had me kind of roll side to side to see if I could get baby to move.  Nope. So she dug around with the u/s wand, trying to get baby to shift and stretch out.  My full bladder was not thrilled. After about 10 minutes she had me go empty my bladder hoping that would stimulate baby to shift. While in the restroom I did a little jumping around in the hopes that it would wake baby up and get him/her moving.  Hopped back up on the table and the nurse was there to do the finger stick and get the blood drops. I was thinking "Great - all this sitting still is probably letting baby settle right back in for a snooze."  My calisthenics in the bathroom were wasted.

Once the blood part was done Kelsey spread some more u/s goo and started looking again. Yep - just as I thought - baby was back in position.  Kid - you really aren't making this easy!  We did get some good profile pictures and Kelsey said the nasal bone looked great, which is a good sign since Downs babies generally do not have good nasal bones.

Finally after about 30 minutes total of what looked like hiccuping and turning away from us the baby took pity on my (full again) bladder and decided to give us a little stretch. Kelsey was quick and caught it so she could do the measurements. 1.39 mm. I was stressing because someone on thebump said they want it below 1.3.  I was freaking out a bit for the rest of that part and while waiting to talk to the doctor.

My doctor happened to be across the street at the hospital delivering a baby so we met with another doc.  The first thing I asked about was the measurement and she she said they want it to be under 3 mm, not 1.3, so my 1.39 was just fine.  I so need to stop reading things online and freaking myself out!

So after chatting for a few more minutes were were on our way with some nice new pictures and an appointment for Oct 20th.  Now I just have to wait the 7-10 days for the results of the bloodwork and then I can (hopefully) rest a little easier.

Now for the fun part - some new pictures of Baby W 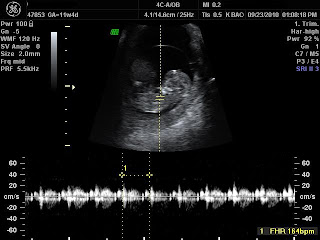 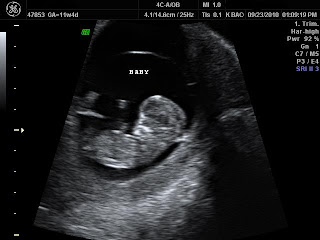 Waving to the camera 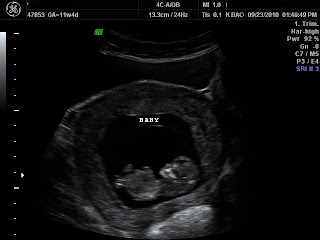 Nice profile pic with baby just chilling in there
Posted by kjw at 4:11 PM