Well hello there - where did you come from? 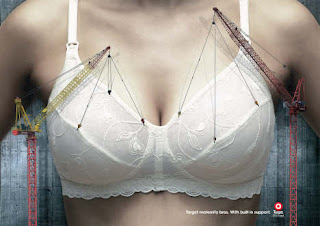 Ok, I have to admit that stepping on the scale this week has been tough.  As someone who has been very weight concious for most of my life and is terrified of weight gain I know it is going to be a struggle to watch the numbers creep up and not fall back into bad habits. But I won't do that. The health of this baby is too important and I won't let my vanity destroy it.

That being said, after a week of not working out due to being at the in-laws (and their love of all things fried) I expected a little jump in the numbers.  Unfortunately I was right.  But I think the biggest surprise has been where I think the weight has all appeared this week.  Right now it is sitting squarely in my bra.  I've always been a pretty busty gal - 32D on my 5' 7" frame.  Now I fear I am going to slowly creep  into porn star status. Or - horror of all horrors - resemble Heidi Montag (disclaimer: I am proud to report that I have never watched a single episode of 'The Hills', but it's hard to miss that fame whore and her barbie doll bits plastered all over the web).

I know J won't mind the extra fluff up top, but he isn't the one that has to lug these things around.  Last night's run at the gym had some added discomfort and I fear that soon I won't be able to run due to the added baggage up top.  I see a shopping trip in my near future for some heavy duty bras. Yeah - those don't sound sexy at all  :(

Anyway - here is this week's check in:

How far along? 11w2d - baby is the size of a lime. Of course I think of limes and I think of nice cold Coronas. I miss beer.

Weight gain/loss: 5 lbs according to my scale this morning. Ugh - that is not an easy number to swallow.  Damn you boobs!

Maternity Clothes: Nope - everything still fits fine. I have some Be Bands at the ready, but haven't had to use them yet.  I did buy some maternity tops from Old Navy (huge sale) but it'll be a while til I have the belly to fill those things out.

Symptoms: Ok, I jinxed myself last week when I said my bathroom issues were getting under control.  Cement bowel is back with a vengeance.  Also experiencing some big time breast tenderness.

Gender: I have no idea, but for some reason I am leaning towards pink.  My adorable niece has determined it's a girl, but I have a friend who thinks it's gonna be a boy.  We'll find out in about 8 weeks.

Sleep? Didn't sleep well at the in-laws,  but have been sleeping like a baby the past two nights to make up for it.  I've gotten up once a night to pee, but that's it.

Best moment this week? Told his parents and some friends up in Charlotte and it is so nice to be able to talk openly about it. Oh, and my 2 1/2 year old niece has decided that baby is a girl and has 'bought' baby some stuff (my sister bought it). I had a voicemail on my phone last night of Kayleigh trying to show me the rubber ducky and onsies that she got for us. I saved it on my phone - it was too cute to erase.

Movement: No – still have probably 6 - 8 weeks til that happens.

Food cravings/aversions: Still trying to eat a lot of fruits and vegetables.  I have a weakness for salt & vinegar chips and carbs are wonderful. No major food aversions.

Belly button in or out? In, and still kind of hard on top.

What I miss? Being able to join in celebrations. I was in my friend's wedding this past weekend and everyone went out on the town afterwards to continue the party.  I was so tired (and can't drink) that we headed home. Granted, it was midnight so it's not like we bailed at 9:00, but still, I feel like I missed out on celebrating with her.

Milestones: Nothing major this past week.  I guess I made it to 11 weeks, so that's something.

What I'm nervous about: That the NT scan will show something that we don't want to see.  I'm gonna be a nervous wreck Thursday morning.

Oh - and here is a bump/bloat picture from this afternoon. I had just eaten an apple and a fiber one bar, so this is my food belly. 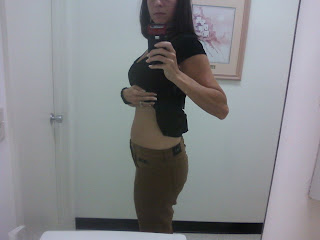 Wow - can't believe how thick around the middle I look.
Posted by kjw at 9:04 AM