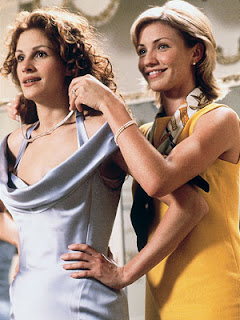 I won't  be trying to steal the groom, though  :)
So we leave today to go up to Charlotte. I am in my best friend's wedding this Friday and J signed up for some training for work so his company will pay for our travel.  I have mixed feelings about this since we will be staying at his parents house the whole time. I really wanted to get a hotel, at least for the night of the wedding, since the wedding is in Huntersville and his parents house is in Matthews (a good 45 min ride).  He didn't want to, so now I am going to be stuck trying to work from his parents house on Wed and Thurs while he is at his training.  Yep - that's right - I will be stuck at their house with no car all day. With his parents.  Who don't work. And have absolutely no hobbies that get them out of the house.  Unless you count sitting on the back patio to smoke.  Um - yeah. Kill me now.

We will also be telling his parents about the baby tonight.  I am interested to see their reaction.  I am also kind of dreading telling them because I really do need to work on Wed and Thurs and I have a feeling that once they know his mom will not leave me alone. She is a bit of a talker. Actually - she is a bit of a gossip.  Love her to death, but she can be exhausting.  I know his dad won't say much since he never does.  Oh, and if their dog comes near me I may have to punt it over the fence. (Ok, no - I would not actually do that, but I truly dislike their dog. A shitty little poodle. Named 'Princess'.  I kid you not).

I am excited about the wedding, though. It's my friend from college. We were randomly paired up as roommates our freshman year at Penn State and ended up the best of friends. Pledged the same sorority, disaffiliated from said sorority our senior year, lived together all four years, and although we don't talk on the phone a lot we do email practically every day. She was in my wedding last spring and I am so happy to be standing up in her wedding with her.  I just hope the ceremony isn't too long. My pregnant self isn't great standing in heels for extended periods of time anymore!

Anyway, here is my weekly check in:

How far along? 10w2d - baby is the size of a prune (which I incidentally have been enjoying over the past few days).

Weight gain/loss: 2.6 lbs according to my scale this morning. Thank you Miralax for having the desired effect and making me less miserable!

Symptoms: Nothing major. Little to no m/s, a little more fatigue than normal, and my bathroom troubles appear to be getting under control. The biggest thing right now is probably my emotions - the mood swings have gotten kind of vicious!

Sleep? Sleeping pretty well so far. I wake up normally at least once a night to pee, but haven't had much trouble falling back to sleep.

Best moment this week? Finally telling my parents and sisters. Now I can stop hiding and avoiding them.

Movement: No – that won’t happen for a while!

Food cravings/aversions: Eating lots of fruits and veggies. Carbs have been my good friend and beside the protein powder in my smoothies there is nothing that I really have an aversion to yet.

Belly button in or out? In, but still feeling kind of weird and hard on top.

What I miss? A night out on the town with friends. I had to bail on the barhopping for my friend's birthday this past weekend and felt like I was missing out.  That and watching football and not having a beer.

What I am looking forward to? Having everyone know so we can talk about it openly. There are chunks of people that know now and after tonight his family will so I won't have to worry so much about it getting out.

Milestones: Hitting double digits - I'm more than 1/4 of the way there!

What I'm nervous about: That something will happen to the baby before the next appointment and that I won't know about it.

And for your viewing pleasure - here is my 9w5d 'bump' (bloat).  Nothing really to see, but I have the pic so what the heck