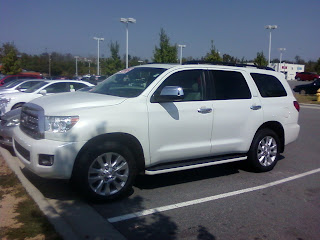 My 2008 Sequoia Platinum 4WD with ALL the bells and whistles
So, while I was doing the girly thing getting my hair done for the wedding and hanging out with the bride, J was out with his dad looking at cars. I knew he was going and told him not to buy anything.  Well, at the reception he started telling me about the Sequoias that this one dealership had and how he wanted to take me up there the next day to test drive one. I could tell by the excitement in his voice and on his face that he really wanted one.

Saturday morning after only about 5 hours of sleep we headed up to the dealership with his dad in tow. I was slightly annoyed by this because we are adults, it's our car, and I didn't feel like we needed him there. Plus he is so freaking compulsive that I knew it was going to drive the sales guy (and me) insane.  We got up there, found the guy that he was working with the day before, and went for a spin.  I have to say, I was nervous about driving something so big, but it was actually pretty cool. I'm used to not being able to see around anything in my low-to-the-ground Mustang and driving this I felt like I was towering over everything.  It was pretty fun!

We get back to the dealership and park it and then the annoying part starts.  His dad is asking a bazillion questions over and over again.  He is all concerned about every little thing. I wanted to yell "It's not your car - shut up!", but I bit my tongue.  We had to go sit at the sales guys desk to get started on paperwork, but before we could fill anything out he found out there was another Sequoia, exactly the same - except with 5,000 less miles on it and no little dent that would need to be fixed.  We took a look at it and liked it, but it was more money so we figured we would have to pass.  When we finally got back to the desk to start on paperwork he got approval to sell us that one at the same price as we were going to get the higher mileage one, so we decided to take it.  That way we still have 6,000 miles left on the manufacturer warranty.

They needed to take it back into the service area to start the 160 point inspection and replace the runningboard that was damaged on one side. I think they just pillaged one off one of the other Sequoias for it.  While we were waiting of course my FIL proceeds to bombard the sales guy with more questions. I just ignored him and ate my granola bar.

J and I finally got back with the finance guy to sign all the papers and make everything official. The thought of such a big car payment for the next 66 months months makes my stomach hurt (neither of us had a car payment previously), but as J points out, we are going to have this car for 10+ years so it's better to make the investment in something nice that we love.  We got all the paperwork signed and headed out (after about 5 hours at the dealership). J and his dad would have to go back before closing to pick it up since they were still doing the inspection and putting new tires on it.

J and I went to dinner with some friends while his parents went out to grab something to eat themselves. According to his mom his dad just couldn't believe that we bought that one since we hadn't test driven it.  I guess we just blew his mind.  Around 7:00 they headed back up to pick it up while I stayed at the house and hung out with his mom. I couldn't deal with his dad's questions any more that day.  The vehicle is fine and it rides like a dream. I got to drive it back from Charlotte yesterday and I already love it. Of course, the first time I have to drive downtown on the narrow streets I might change my mind, but for now it's perfect!  Now we just have to sell my Mustang. I have to admit, I'll be sad to see it go. That was the first car I ever bought on my own and I've had it for a while now.  But, having that nice shiny Sequoia sitting in the garage takes a bit of the sting out of it.
Posted by kjw at 8:13 AM