This is a statement that was repeated over and over again last night as I learned a very valuable lesson.  That lesson is:  Don't hand your kid a string cheese and then not watch him eat it.

Last night while I was making dinner Andrew was underfoot and whining. To shut him up appease him I gave him a string cheese as a snack.  He scampered off into the living room to be enthralled by Sesame Street while snacking on his cheese.  While he sat there I quickly ran out to let the dogs out.  When I came back in (seriously less than 5 mins later) Andrew was sitting in the living room playing, with not a piece of cheese in sight.

I glanced around to see where he threw it. Normally when he's done with something he just drops it.  It's not uncommon to find a snack or sippy just laying in the middle of the floor.  So I fully expected to find his string cheese tossed aside.

I spent the next 15 minutes alternating between checking on dinner and walking around the house saying "Andrew, where's your cheese?" while searching his tent, toy bins, the couch cushions, the bathtub, the garbage, his hamper and a dozen other places he could have shoved it.

I know it's possible that he did actually eat it all, but I'm having a hard time believing that.  Of course the speed with which he can down a hot dog proves to me that he is capable of inhaling a food if he likes it.  So yeah, it's possible that it ended up where it was supposed to (his belly), but something tells me a week from now I'm going to find a piece of petrified string cheese tucked away somewhere. I just hope I can find it before he does! 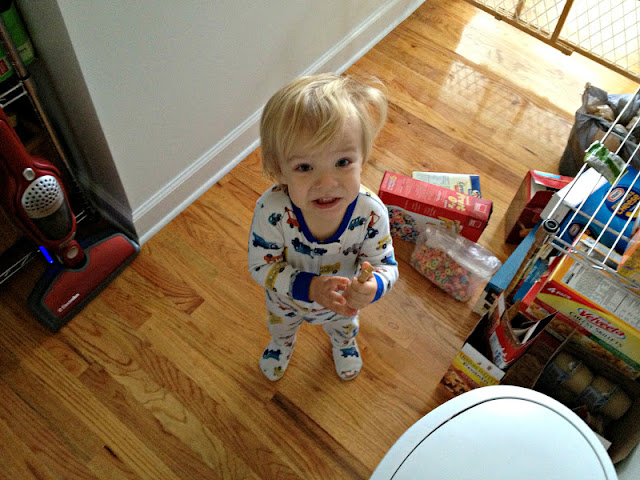