My trip to the Grand Canyon State - Part 2

On to Saturday - we woke up and watched some College Game Day at 7:00 AM (very odd) and watched the beginning of my game while packing our overnight bags and getting ready. My Nittany Lions were stinking up the joint, so we decided to get on the road a little early.  Hopped back in her sweet rental car (a Hyundai Elantra who's only redeeming quality was satellite radio) and headed north again.  Along the way I got some pictures of the local landscape. 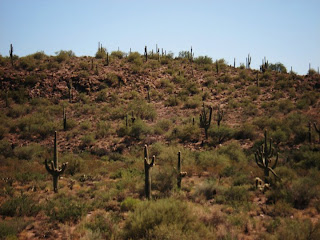 It didn't take long until we started to see the cool rock formations of Sedona.  So we pulled off at one of the rest areas with a scenic view for some pictures. 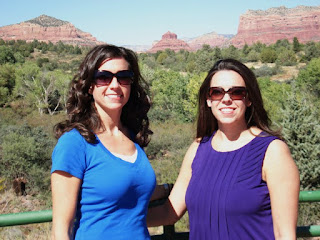 At the rest area with the formations in the background 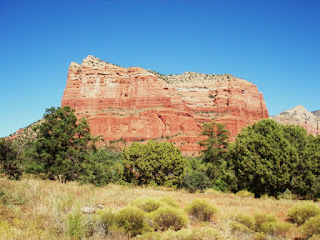 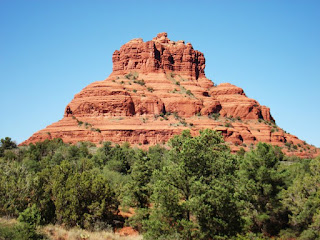 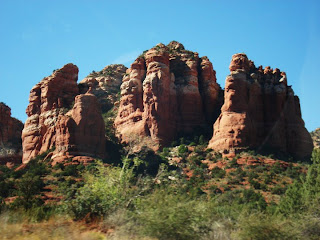 Then we headed into Sedona to find a place to eat before it was time to head to the spa. We ate at the Open Range Tavern with a spectacular view of the red rocks, did a little shopping and then headed to the spa at the Hilton for some pampering. 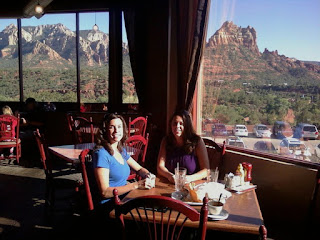 Lunch at the Open Range Tavern
We started out with the mani/pedis and then each got taken back for our massages.  Hers included some salt scrub, but they recommended I skip that because of the pregnancy.  Instead I just had my pre-natal massage and enjoyed every second of it. 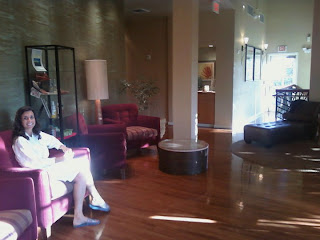 Waiting to be taken back 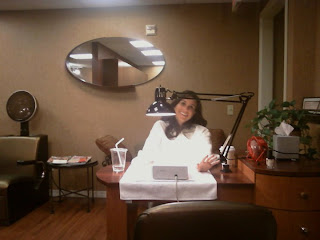 Drying my nails
We finally got out of there around 8:30, headed back to the Hyatt and checked in.  There is a low light ordinance in effect in Sedona, so each of our rooms had a flashlight under the kitchen sink. Nic's room was huge with a kitchen, dining area, living room with fireplace, huge shower and jacuzzi tub and a king sized bed. My adjoining room wasn't as spectacular, but it was still really nice.  We were hungry so we grabbed the flashlights and headed out. Unfortunately the only things open were a sushi place (a no-no for me and she is severely allergic to fish﻿) and a Coldstone Creamery.  Ice cream it is!  We got our fill and hiked back to the rooms.  We had an early morning the next day so I headed to bed. 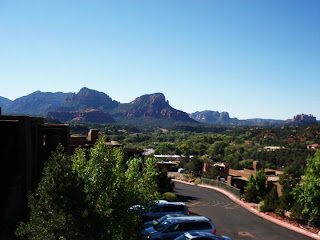 The view from our fabulous rooms at the Hyatt 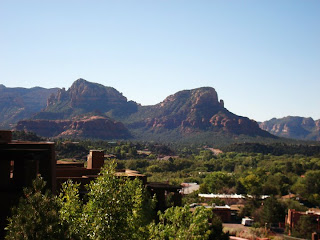 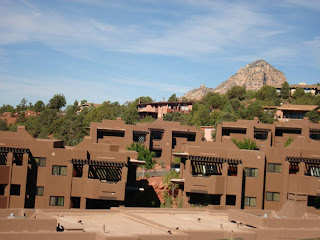 Some of the other buildings at the Hyatt
My alarm went off at 4:50 AM on Sunday to get the day started. We needed to be at the meeting place by 5:45 so we ate some apples and zone bars and hopped in the Elantra to head out. We met up with the balloon group and got in the van to go out to the launch site. After a 20 minute ride we reached the field to find Cletus and Jethro trying to inflate the balloon. 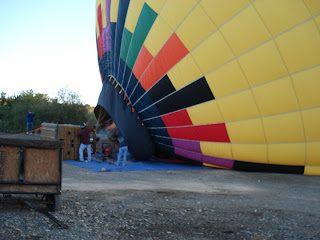 It took quite some time for them to get the balloon inflated and upright and we were getting antsy to get up there since the sun was already rising.  Captain Don came to give up his spiel and instructions and asked if anyone was pregnant since "We can't fly preggers" (yes - he said preggers. I wanted to puke.)  I lied and said no so I could get on board.  For the record, it's not that the altitude or anything is dangerous for pregnant women. It's just in case they have to crash land - they don't want any pregnant women to get squished and possibly hurt the unborn baby.  Being that it was a very calm day we figured the odds of a crash landing were low.
So we finally climbed on board (which is impossible to do gracefully) and soon we were off.  This is what was right above our heads: 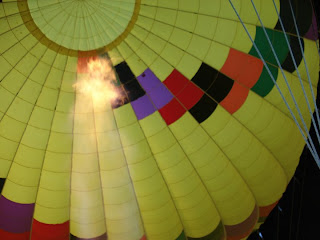 Probably should have passed on the hairspray this morning! 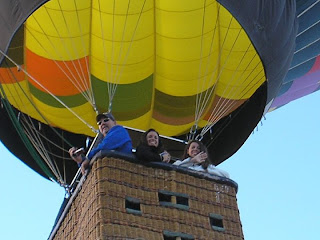 Taking off
Soon we were aloft and floating over the landscape. Even though we missed sunrise I was still able to get some nice shots: 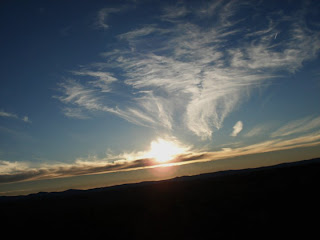 We floated along - rising up to 1200 ft - all the while listening to Captain Don ramble on about the landscape, the history of ballooning, and lots of other stuff that I wasn't really paying attention to at the moment. 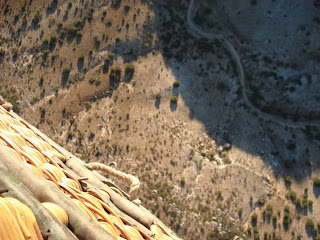 The view from about 1200 ft up
﻿
﻿I was keeping my eyes peeled for some wildlife, but the only things we saw were some jackrabbits.  After a while I started to feel a little hot from my layers and the flames shooting over my head.  I got a sick feeling in my stomach and a slight ringing in my ears.  I said "Uh oh" and Nic looked at me.  "Are you ok?". Umm.... not so much. I had broken out into a cold sweat and everything was going white. Crap - I'm going to pass out!  There was no room to sit, to put my head between my legs, or to do anything really. I was able to get my jacket off and push up my sleeves to get some air to me. I put my head on the side of the basket and closed my eyes. Luckily after about 5 mins the horrible feeling passed and I made it through without falling over or puking over the side.  Hmm - maybe there is something to that 'no pregnant women' rule. 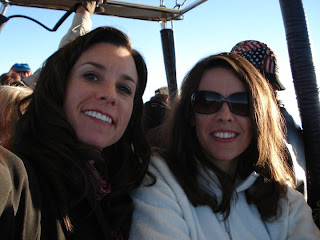 Just prior to my lightheadedness
We floated along for another 10 mins or so and Captain Don found a good landing spot up ahead and radioed to the chase crew to tell them where we would be coming down.  We came in gently, the big dudes in the chase crew jumped up on the sides of the basket to keep us down, and they started to deflate the balloon so we could get off.  Mimosas followed (my physician sister assured me it was fine to have a sip of champagne) and some snacks before we headed back to the van to take us to our cars. All in all a fantastic adventure! 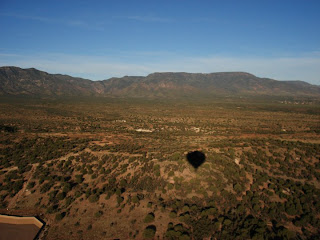 One of  my favorite shots from the balloon 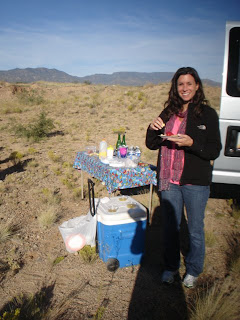 Snacks after the balloon ride
We drove back to the hotel, freshened up, packed our stuff and headed back towards Phoenix. Next up - football game.
Nic's friend, Jordan, and his wife picked us up at a Burger Kind one exit down from University of Phoenix Stadium and we headed over. They have VIP parking so it made sense to take one car.  We got to the stadium and headed inside. I have to say I was pretty impressed with it - especially in the club level seats where we were sitting. 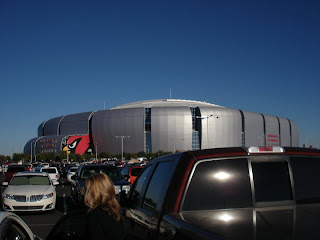 The outside of the stadium
We had great seats and settled in for what I was sure was about to be a blowout of the home team. 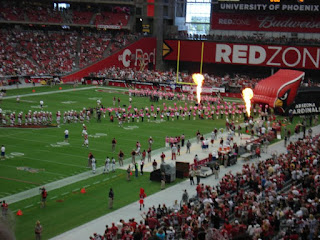 Home team being introduced
We were pleasantly surprised when the Cardinals beat the defending Super Bowl champs 30-20.  Jordan was going crazy and it was really  nice to see the home team come out victorious. 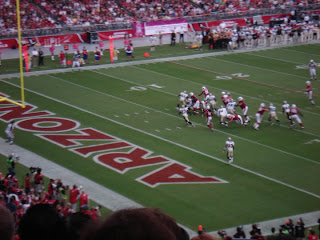 The Cardinals about to score 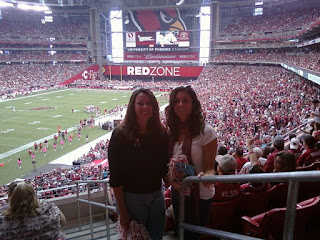 All smiles for a Cardinals win
﻿After the game we sat in traffic for a while, got dropped off at our car, and headed home.  We were both pretty tired from being up so early and having such an adventurous day that we hung out and watched Sunday Night Football and relaxed.  Nic ran out and got us some Taco Bell for dinner (yes - I was in AZ and the closest to southwest food that I got was Taco Bell).  While we ate we watched her cat, Mike, come trotting into the apartment with a new friend.  A desert spiny lizard that he caught outside. He dropped it and the lizard promptly hauled ass across the room to get away from Mike and certain death.  My sister was more interested in getting a picture of him than catching him. 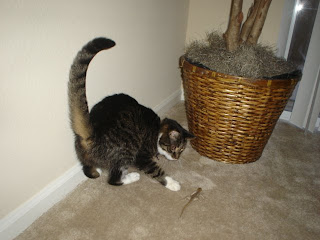 Mike playing with Carl
I was beat so I took a shower and went to bed - hoping that the lizard wouldn't make an appearance on my pillow.  I woke up bright and early at 6:00 AM and started packing. When I went out to the kitchen to grab breakfast I was greeted by Carl (my sister named the lizard Carl) peeking out from under the stove. 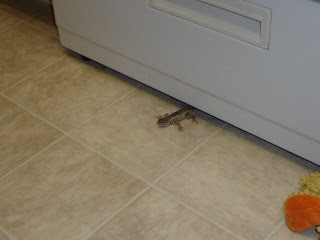 Carl's hiding place under the stove. He has since been captured and released back into the wild.
We gave up on catching him for the moment and headed out for some last minute souvenir shopping before dropping me off at the airport. Downtown Scottsdale is very cool and I wish we'd had more time there. We did get some nice pictures. 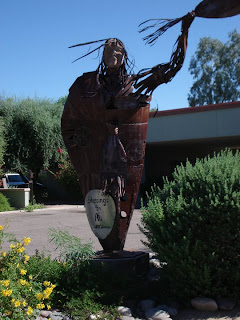 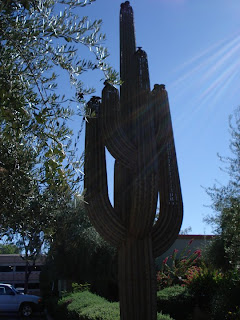 I wanted a picture with a real saguaro cactus,  but had to settle for the fake one 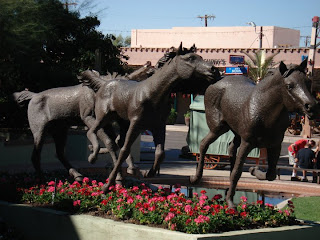 We did some shopping, I got some trinkets for the in-laws (back at home taking care of my husband post-surgery) and we were on a mission to find a onsie for the baby. My sister really wants to get him/her one so we went to half a dozen places. I walked into this one gift shop and was shocked to run in to a co-worker of mine from back in Charleston. What the heck was he doing in Scottsdale? And what are the odds that I would run into him in this tiny gift shop in the downtown area?  So random.﻿  Anyway, we never found a onsie, but Nic is out there for 4 more weeks so she has some time.  We took some final pictures and headed to the airport. 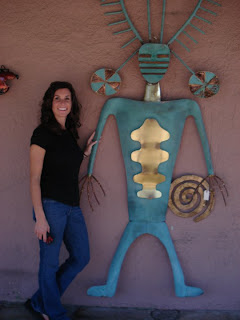 Outside the gift shop where I saw my coworker. So weird! 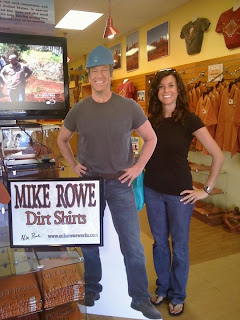 No, not the real Mike Rowe  :)
﻿Nic got me to the airport about an hour before my flight, I said a tearful goodbye and headed back to Charleston.  This was by far one of the best long weekend trips I have ever taken and I will never forget all the fun that we had.  Thanks Nic - you're the best!!!
Posted by kjw at 11:13 AM