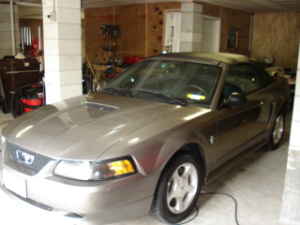 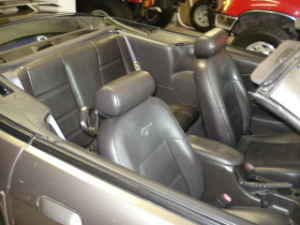 Yesterday I re-posted my ad to sell my car on Craigslist. I had to deal with some annoying people the first time I posted it - especially the guy that was lowballing me and trying to bully me into dropping $1K off the price.

This time I wised up and put J's phone number in the ad so the people would call him instead of emailing me.  I did have one dude email me and ask if there was any chance of me letting it go for $3500. Um....  no.

We took the car down to a vacant parking lot off of one of the main roads in our town and put the sign on it. The sign also had J's number on it - which  made me happy because I did NOT want to deal with people trying to haggle with me.

Soon after we got back from putting the car out there J's phone rang. A guy wanted to come take a look at it.  I was trying to figure out if he had seen the car the day before when I drove it to work and had the sign on it, or if he saw my ad that I just posted.  Either way, he was going to be there in 30 minutes to look at it.  When he called to say he was there J drove over to meet him (arm in a sling and all).

About 20 minutes after J left he called me. "Get the title and that bill of sale - he's gonna take it.".  YES!!  Car is sold!  We were originally asking $4900 and the new ad had it at $4800, but we let it go for $4300. The dude showed up with cash, so if we tried we probably could've gotten more for it, but I was just happy to have it over with.  We had to scramble to get my PSU alumni license plate frame, the tag, and my Steelers license plate off of the car. J also had to get the satellite radio hookup out of it. Something we probably should have done last week before he had his surgery and only had the use of one arm.

So the $4300 will cover the down payment that we put on the Sequoia (on the AMEX) and the rest of it covers my portion of the bills for this month.  That means I will be able to pay off the final balance of my credit card and finally be credit card debt free.  Such a good feeling!

I will say that I was sad to see my Mustang go. That was the first car that I ever bought completely on my own.  I was bummed to see it being driven away, but once I looked at the envelope full of money I cheered up a little  :)
Posted by kjw at 8:21 AM