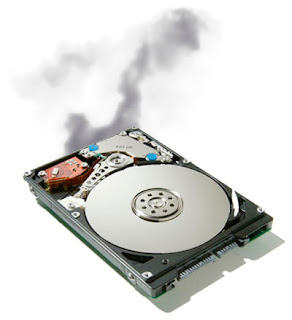 On Saturday I was on my home laptop in the morning and everything was working fine. Later that day a friend wanted to look something up so I took it off of the cooling pad that I keep it on and unplugged the computer so she could use it.  When she was done she left it on the dining room table and it was sitting on one of the place mats.  A while later I noticed it was there so I took it back over, plugged it in and set it back up on the cooling pad.

That night I wanted to use it so I could watch two football games at once (even though my Nittany Lions stunk up the stadium) and I couldn't get it to turn on.  After several attempts I handed it to J (he is more technologically savvy than me) so he could take a look at it.  After messing with it for about an hour he informed me that the hard drive appeared to be toast.  Not what I wanted to hear.  Especially considering that in my infinite wisdom I had neglected to back up all the files and pictures on there.

Once it hit me that all of these memories were possibly lost I went upstairs and started bawling (thanks hormones!).  I'm not concerned with some of the random stuff on there, but I had my personal pictures from our rehearsal dinner, our wedding, the honeymoon, the Super Bowl I went to two years ago, our friend's weddings, my niece's first birthday, and probably countless other things that I can't think of at the moment.  It's my fault for not backing them up or making sure everything was uploaded to shutterfly or something.  Part of me wants to be pissed at the friend since she was the last one to use it, but J said I can't blame her and that these things happen and that it might have just been it's time to go. Whatever dude - all my stuff is gone!

J talked to tech support and ordered a recovery disk to see if he can get it to boot up and access some of the files.  I assume I will be purchasing a new hard drive for it as well. I can almost guarantee that he will say "You might as well buy a new computer by the time you pay for all this stuff", but I'm not doing that.  A new computer will cost at least twice as much as I'll have to pay to fix this one, and it was working fine before all this.  No need to get a new one especially now that I have a huge car payment and there is a little peach in my uterus.

I guess looking on the bright side this happened before I had baby pictures on the computer that got wiped out.  You can bet that I'll start backing up my files now.  I suppose I should add a thumb drive to the list of things I need to buy. Sigh...
Posted by kjw at 11:54 AM