Seriously cannot believe that the little munchkin is 15 months old.  Where has the time gone??? 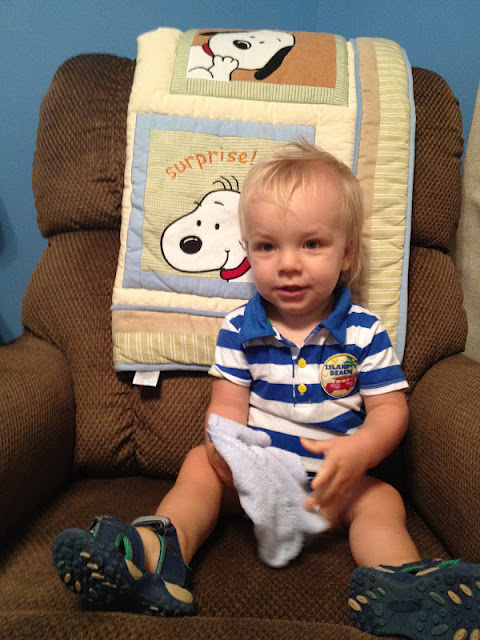 (He seems to be getting over his intense hatred of shoes)

Stats:  I'll find out his real stats tomorrow at his 15 month appt, but I'm guessing he's pushing 25 lbs and 31.5"
UPDATE: Here are his stats for 15 months:
Weight: 23 lbs 10 oz (37th percentile)  He dropped down from 46th at 12 months and has only gained 18 oz in 3 months.
Height: 31 inches (48th percentile)  Down from 66th at 12 months. I don't think this was very accurate and want to measure him myself here.
Head:  19 inches. Not sure on the percentile because the nurse had him marked at 18 inches and the doctor remeasured since his head would have had to have shrunk for that to be right.

Size (diapers, clothes, etc.):  I believe we are nearing the end of the size 3 diapers.  They still fit fine and he doesn't leak (much), but I've started doing a 4 for overnights because holy hell can this kid pee a lot in his sleep!  12 month onesies still fit and some 12 month rompers, but for the most part I have him in 18 month ones. All 18 month pajamas because he's too long for the others.  The 18 month shorts are ridiculously huge on him, though.  Oh, and a few weeks ago I put him in a swim trunks from last summer (6 month size) and they fit over his diaper but were pretty short - I thought it was pretty hysterical.  :)

Sleeping:  On weeknights he sleeps ~ 10.5 hours at night (we wake him up at 7:00) with one long nap in the afternoon. Some days he has still been asleep when I pick him up at 5:00 after going down for a nap at 1:00.  On weekend nights we let him sleep in the morning til he wakes up and he normally goes for 12 hours or so. Still only one nap, but normally not as long as at daycare.  Two hours is about his max on the weekends.

Eating:  He's getting better about eating, but is still nowhere near what some of the other babies I see out there.  He's a big fan of oatmeal, pancakes (with peanut butter on them), french toast sticks, mac n cheese, chicken nuggets, hot dogs, fruit loops, yogurt bites, strawberry newtons, and cheesy puffs.  He is starting to do better drinking milk out of a sippy cup so we're at least making some progress.  I'm interested to see what the pedi has to say tomorrow about his eating.

Milestones:  Two of his 1 year molars made an appearance this past weekend (with lots of crabbiness to go with them!).  Still NOT walking or standing independently, though.  He cruises, he climbs, he crawls like a madman, but he doesn't have any interest in walking.  He's babbling even more than before and he's started trying to repeat words after us sometimes.

New adventures:  He had his first time really playing in the sand at the beach this month (he's not sure if he's a fan yet) and we've broken out his baby pool which he seems to love.

Favorite toys and activities:  He's finally started putting things into things so now he loves the little plastic dumptruck I got for him since he can put the blocks in the back and dump them out.  He also loves the stacking rings since he's figured out to put them on.  I think his very favorite things are cars that he can push around (he will push them all over the house) and he likes the foam letters during bathtime (he's even started putting them into the little bath toy bin). 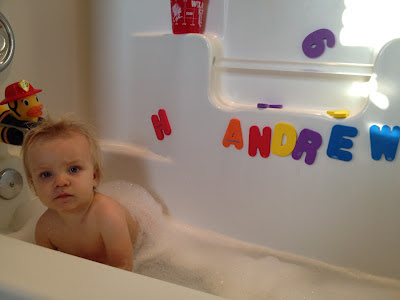 What I'm looking forward to:  We're taking a little vacation to the mountains of NC next month around my mom's birthday. That will be our first vacation with the  munchkin in tow - should be interesting.