Yesterday morning Andrew got up at 7:00 which is only unusual because it was after only 10 hours of sleep and on weekends he sleeps 12+ hours almost always.  I changed him, got him some milk, and rocked him.  He was fighting to stay awake on my lap and cuddled with me, which should have been my first red flag.

When he woke up 90 mins later he was still cranky.  We fed him some breakfast and he wasn't super interested, but he got it all down.  He was not the happiest baby in the world, but we packed him up and headed to the beach to meet our friend, Jay, and his son, Collin.

We got the tent all set up and I slathered him with sunscreen. He fussed, but that's par for the course with sunscreen application.  We took him in the tidal pool and let him float around in his ducky bathtub.  He wasn't overly amused: 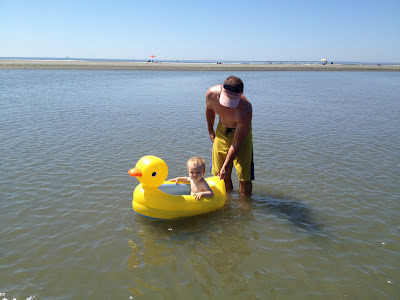 I got him back up in the tent and got him settled on a makeshift bed where he took a 30 minute nap. 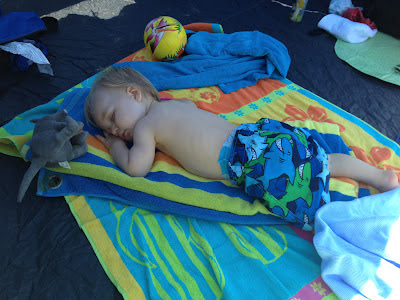 When he woke up he was still fussy.  He was drinking water, but he wouldn't eat any snacks.  We packed up and went home and when we got back to the house he was kind of lethargic and limp in the car seat - not being his usual spastic self.  And he felt warm to the touch.  I took his temperature and my stomach dropped when the thermometer made the long beep to signify fever.  101.1.  My poor little munchkin butt.  I felt like the worst mommy ever for not realizing he was sick and taking him to the beach.  Mommy fail - big time m :( 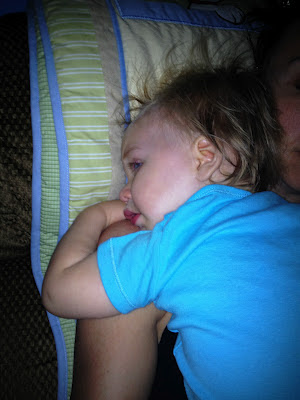 He took a three hour nap while we did some work outside. I got him up and fed him some dinner, which he ate with no problems, but he was still cranky.  I laid some blankets on the living room floor for him to lay on while we ate dinner. That's when the puking started. 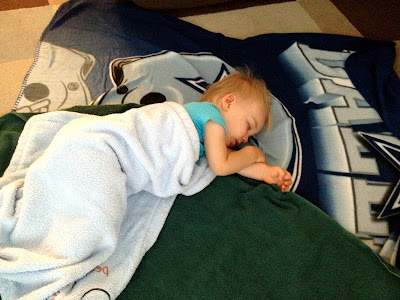 From 6:00 until 10:00 last night he threw up at least half a dozen times.  I couldn't get any fluids in him (or at least to stay in him).  Every time he took a sip of water or pedialyte he would throw up within a few minutes.  He had wet at least three diapers and was still producing tears when he cried so he wasn't dehydrated (yet) but I was worried.

We got him to bed around 10:30 after removing all toys from the crib and laying down a towel.  I heard him at 1:30 and got up to check on him.  Everything looked ok, but he had the towel pulled loose and bunched up under him (he likes to lay on things when he sleeps).  At 6:50 this morning he woke up and when I looked in his crib he had thrown up at least 3 times that I never heard on the monitor (and somehow found the energy to gnaw on the one remaining exposed crib rail - what the hell?!?). 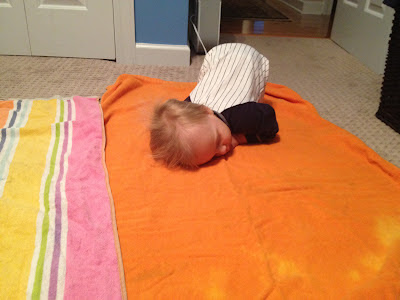 I spread out some towels and blankets to try to protect the rugs (he always hits the rugs instead of the easy to clean hardwoods - go figure) and cleaned up his crib.  He was so thirsty this morning he chugged water and then promptly threw it all up.  I fed him some bland cereal for breakfast and had high hopes for it staying down since he ate it eagerly, but that too came up.

For the last couple hours I've been able to get him to drink water half an ounce at a time and he's eaten two crackers that haven't made a reappearance.  He is currently napping in his crib and I'm praying he takes a nice long one and feels a little better when he gets up.  If he does maybe it will ease a little of my mommy guilt.