We haven't been ones to sit our kid down in front of the tv to keep him occupied. Not that I think a kid watching tv is the end of the world - we just didn't have anything that seemed to interest him.  He really doesn't pay any attention to it when it's on with the news or whatever sport we are watching at the moment.

That all changed once The Wiggles came on.

Andrea had mentioned that he likes the music if they put a Wiggles video on at daycare. (No - they don't use tv to babysit the kids at daycare - they sometimes put on a video with music in the playroom during playtime).  Anyway, this past weekend I set our DVR to record some of them to see what would happen.

This is what happened: 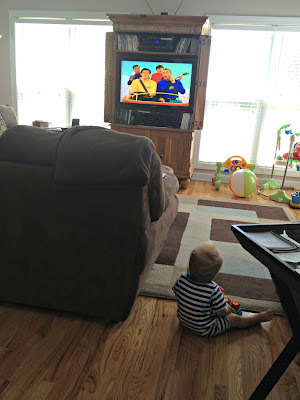 For a good 10 minutes he sat transfixed by the singing and dancing Australians.  It was pretty comical to see him watching it. And when a song started up he "danced" around to the music.

So yeah - I don't plan on using the television to keep my kid entertained for hours on end, but if it gives me 15 minutes to get some dinner started or the dishwasher unloaded (without the munchkin "helping") I'll take it.  If only those songs weren't so annoying...