Ten years ago today I avoided making what would arguably have been one of the biggest mistakes in my life.    June 14, 2002 was to have been my wedding date. (For the record, the only reason I remember that it's today is because it's Flag Day).

Backing up a little - I had gotten engaged when I was 23 (almost 24) after only four months of dating.  Seemed like a good idea at the time.  Thankfully it ended up being a kind of long engagement (over 18 months) and before I made a huge mistake I came to the realization that it wasn't right.  In my heart I knew he was not the man that I was supposed to end up with and I did not see the marriage lasting more than a few years (if that).

As the date was drawing closer I began to freak out.  The evening of March 31st I was at work (I worked at a tv station and didn't get done until 11:00 PM) and I was losing it.  My sister called to ask me something and she could tell something was wrong.  She asked if I needed anything and I just asked her to stay up because I needed to talk to her when I got home (we lived together).  I made it through the next couple hours at work and hauled ass at 11:00. My then-fiance was the director for the 11:00 news so he had to stay for another hour.

When I got home I started talking to my sister, not really knowing what to say, until I finally blurted out "I can't do this!".  We stayed up until 3:00 AM talking.  I was scared that people would be mad at me for calling it off because plans had already been made.  She assured me that people would be more upset if I went through with a wedding that I knew wasn't right.  I sent a quick email to my mom telling her I needed to talk to her the next day and went to bed.

She waited until 11:00 to call me since she knew I was up late due to the time that I sent the email.  We talked for a while and I told her my decision.  She supported me completely and assured me that no one would be mad at me.  I felt a little bit of relief, but knew I still had to do the hard part - telling my soon-to-be-ex fiance that it was over.  On April Fool's Day of all days.

He came by my apartment during his break between the 6:00 and 11:00 news and I was a nervous wreck. The ring was in the box on the dining room table.  He knew something was up based on the expression on my face. I sat on the couch on one side of the room and he sat on the love seat facing me.  I honestly don't remember what I said or how I broke the news to him, but I made it clear that I could not marry him.  When I handed the ring back to him he told me I could keep it, but I insisted he take it.  He left to go back to work and I was relieved/upset/happy/sad - you name it.  The worst part was that we worked together and I had to go in at 10:00 to start my overnight shift. Talk about awkward.

The next few months were kind of weird at work.  Plus I was freaking out not knowing what to do next.  My sister was finishing up her residency at UK Children's Hospital and had accepted a position at a pediatric practice in Walterboro, SC (50 miles outside of Charleston) so the decision was made that I would just move with her and start my life over.  Ryan (my ex) actually moved before I did. He interviewed for and got a job as a director at a tv station in Atlanta and moved a few weeks before I left. I was honestly happy for him despite some of the ugly things he said to me after our breakup.

Oh, and one final detail that I find absolutely hilarious - Ryan married another girl named Kelly two weeks before J and I got married.  I only know that because when I was planning our wedding I would try to look up people's wedding webpages and I randomly typed in his name to see if anything came up.  It's funny because I would have picked the day he got married (April 18th) had it been available at our venue, but we had to take May 2nd instead.

So yeah - I avoided making a huge mistake a decade ago and I couldn't be happier.  I mean, if I'd gone through with it I wouldn't have this amazing little guy in my life: 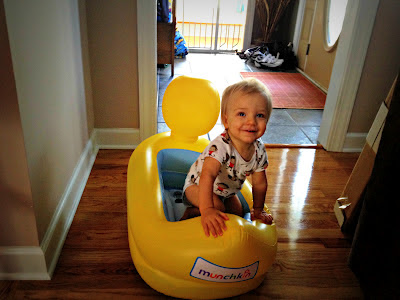