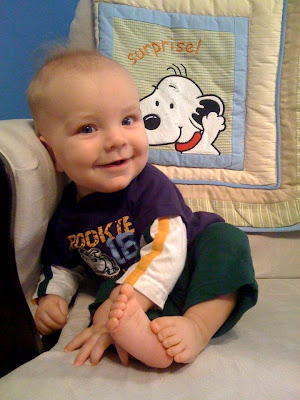 Size (diapers, clothes, etc.):  Just about done with the size 2 diapers.  The size 3's still seem a little big on him, though. I think his thighs aren't chunky enough to fill the leg holes properly.  As far as clothes he is still in some 6 month stuff and I even fit him in a supposed 3 month onesie last week (the sizing on this crap is so bizarre). I have him in a lot of 9 month pants for his long legs. He's in the 6-9 month sleepers since he is long.

Sleeping:  His sleep has gone all to hell lately. This past weekend he was up every 3 hours at night. Not sure if it was because of the unfamiliar surroundings or if he's hitting yet another growth spurt or what.  I long for the nights of 9+ hours (although we did get 8 hours and 40 mins out of him last night).  He naps wonderfully at daycare but it's hit or miss at home. We are going this weekend to buy curtains to try to make it a little darker in his room to see if we can replicate the success they have during the week.

Eating: We had to start supplementing him with formula this week (sniffle sniffle). I believe that with my body being ravaged by the flu this past week my supply tanked and it hasn't rebounded yet.  He HATES straight formula, but if we mix it with breastmilk he will take it. I sent four 5 oz bottles with him today with an 8 oz bottle of formula and instructed them to add 2 oz of formula to each bottle when they feed him.  In the meantime I am downing water, tea, and fenugreek like there's no tomorrow and praying that it works soon.  As for food, we tried avocado again and had more success this time. He actually got a few pieces in his mouth, but after moving it around in his mouth for a little bit he then gagged and threw up. This happened with banana, too. I think he still needs to learn what to do with chunks of food in his mouth - he doesn't know how to swallow them yet.  I feed him a jar of food each evening - he loves sweet potatoes, squash and green beans, tolerates peas, carrots and pears and he HATES banana puree.  I bought some butternut squash to cook for him, but haven't done it yet.

Milestones:  He has his first tooth. An exciting milestone, but it makes me sad. Not only because it makes him seem even more grown, but also because now when he bites down while eating it's no longer just uncomfortable - it's downright painful.  Still working on breaking him of that habit. Luckily he hasn't drawn blood (yet).  He's still not sitting much on his own, but he scoots and scooches all over the place. He has also started with the da da da, ba ba ba, and ga ga ga sounds.  He passes things from hand to hand with no problem and seems to be learning cause and effect - if he drops something he seems to know I will pick it up. Just this morning he kept looking at me, dropping Sophie, and smiling.

New adventures:  We did our first race two weeks ago and I pushed him through the whole 5K Race for the Cure in the jogging stroller.  We also did family pictures and took a trip up to Charlotte. We considered taking him to the Panthers game this past weekend, but decided it might be too hard and left him with J's parents (my MIL wanted the extra cuddle time anyway!).

Favorite toys and activities:  He still loves the jumperoo and I bought him a Sophie and he seems to thoroughly enjoy chewing on her face.  We also discovered that in a pinch a package of Tic-Tacs makes an excellent toy (as long as he doesn't get it open!) and he loves playing with his spoon.  One of his new favorite activities is standing on our lap and bouncing - kind of like he's in the jumperoo.

Funny happenings:  Two weeks ago J was playing 'Super Baby' with him (where we hold him up over our heads and he stretches out his whole body like he is Superman flying).  J looked up at him and was laughing when Andrew proceeded to look right at him and spit up. All over J's face. And in his open mouth.  I was laughing hysterically while J yelled for me to get a towel.  Too bad I couldn't get a picture of it  :)

What I'm looking forward to:  Taking him to a pumpkin patch this weekend, bringing him to my company's fall festival lunch this Friday in his Halloween costume, and dressing him up for Halloween for daycare on Monday for their Halloween breakfast.
Posted by kjw at 12:09 PM