I feel like a whole new woman today.  It's amazing what 8 STRAIGHT HOURS of sleep can do for a person.

That's right - I got a full night's sleep last night for the first time in a week.  It still took me an hour to fall asleep, but once I was out I was OUT.  I never woke up even once during the night. I almost smiled when the alarm went off because I actually felt rested.

It's a huge difference from yesterday when I sat through the day at my desk feeling like I was on some sort of hallucinogen. Seriously - who needs 'shrooms?  Just be awake for 44 of 48 hours and you can see all kinds of stuff.  I thought I was going to fall off the stairclimber when I went to the gym after work yesterday (yes, I still went and attempted to work out even with the lack of sleep. I was hoping the extra exertion would give me that last boost I needed to make my body get some rest).

So I'm not sure if it was the Tylenol PM or the fact that my body just couldn't take it anymore, but I am happy to say that I got 8 great hours of sleep and I feel fantastic today.

My other big success (and the reason I am smiling today) is this: 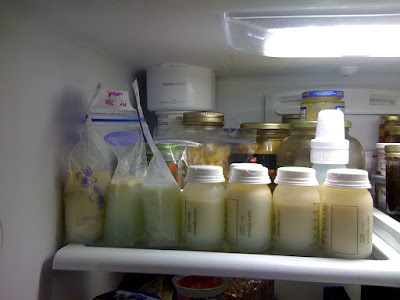 It could be the tea. It could be the fenugreek. It could be the blessed thistle. It could be the mass amounts of water I'm drinking and all the food I've been eating.  Whatever it is I don't care.  I was able to pump a full 7 ounces more yesterday than I did on Monday. That is a full daycare bottle's worth.  That is such a load off of my mind. Now I don't have to stress out and burst into tears thinking that I am failing my little munchkin.

Speaking of him, we had his 6 month well check today.  We had to see the nurse practitioner since Dr. Graham was not available, but I really like Kathy and she's the one who saw him back in July when he was all out of sorts one day (it ended up being gas).

She said that he looks absolutely fantastic and he is perfect.  He was flirting with her and giving her big smiles.  I told her about our attempts with bananas and avocados and she said to keep it up since they say it takes 12 tries to do something new.

She said his ears look great and his lungs sound good.   She loved how alert he is and how great he is with his head.  She did a little practice sitting with him and said he is just about there.  All in all she was very happy with his development.

While we waited for the nurse to come in to administer the shots Andrew entertained himself by shredding the paper on the table. This kid loves to rip up paper! 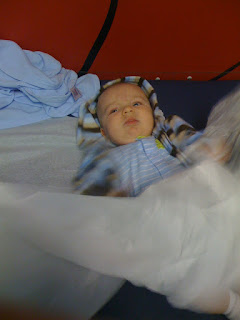 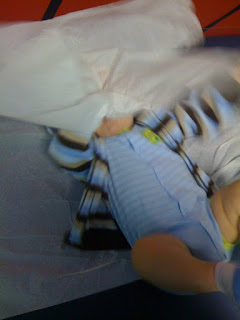 I dreaded the shots, but he took them like a champ. He cried during them, but settled right back down and had stopped crying before I could even pick him up.  He has an appointment in four weeks to get the second dose of the flu shot and then he won't be back until his 9 month visit (no shots at that one!).
After we were done we took a quick trip to Target for some diapers and a new toy for him for being so good. Now he is sacked out in the carseat and I'm leaving him there til he wakes up. 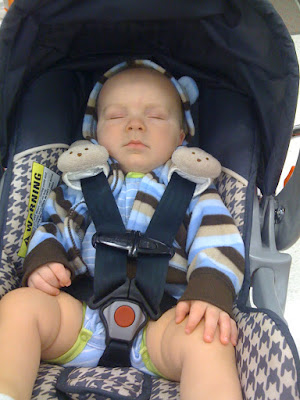 So far it's being a good day and J just sent me a message letting me know he might be home early today.  So many things to be thankful for this Thursday  :)
Posted by kjw at 10:59 AM