For your incompetence in discovering a new route to the West Indies.  Thanks to you I have the day off of work today  :)

I actually still took Andrew into daycare this morning so I can get a bunch of stuff done around the house without also entertaining him. I'll be picking him up around 2:00, though, so I can get some extra baby time in today.

I know what you're thinking - "She took her kid to daycare so she could sit on the computer uninterrupted??".  No. I am only on the computer right now because I am hooked up to my pump like a dairy  cow and I can't do the cleaning that I still need to do until I am done.

So far this morning I have already been to the gym for a quick workout, gone to the grocery store, picked our garden (with a ridiculous amount of bell peppers), thrown in a load of the munchkin's laundry, gathered up mine and J's laundry, taken out the bathroom trash, and figured out what we're having for dinner.  Once I'm done being milked I am going to dust and vacuum the entire house (which is very badly needed!) and clean the bathrooms. 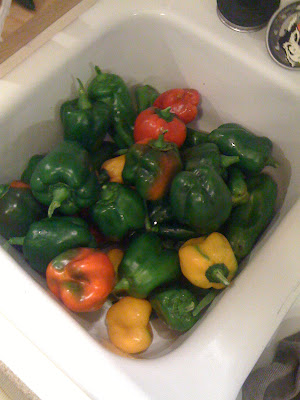 Seriously - who is going to eat all of these peppers???

Once 2:00 hits (or whenever Andrea calls me to tell me he is up from his afternoon nap) I am going to go pick up the munchkin and have me some more baby time.

We had an absolutely fabulous weekend compared to last weekend and it is starting to restore my faith in myself as a mom.  We got two 90 minute naps out of him each day, he slept straight through the night every night, and he was such a happy baby.  Plus there were no bleeding boobs and plenty of milk to go around.

He did scare the bejeezus out of me on Saturday evening, though. I was attempting to feed him some banana puree (with very minimal success) when all of a sudden his face turned really red, his eyes were watering, and he started spitting up and choking.    I swear my heart almost stopped as I grabbed him out of the high chair and started burping him to try to clear his throat.  Two seconds later he was all smiles and babbling at me, but I was shaking I was so scared.  I don't know if that was his way of telling me that he doesn't like bananas (he kept making his gaggy face while I was trying to feed him) or if he just sucked some down the wrong pipe.  Either way, it led to an evening of lots of baby hugs and cuddles. 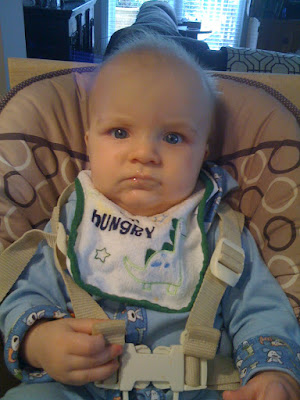 Before choking on the bananas. He's not a fan.
We did succeed in getting him to sit a little bit. Ok - it was only for 5 - 10 seconds at a time, but it's a start: 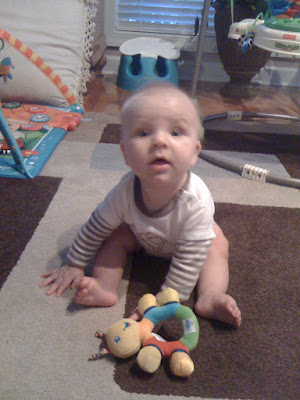 He spent some time hanging out with daddy in the living room: 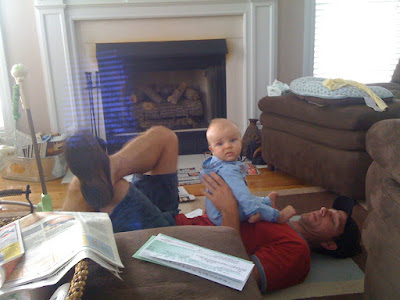 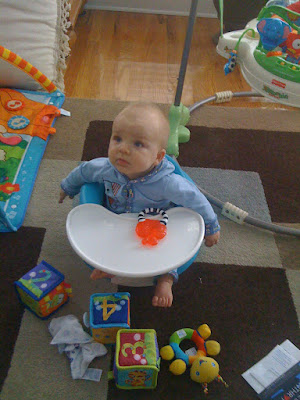 And as always he enjoyed his tub time. This kid LOVES the bath! 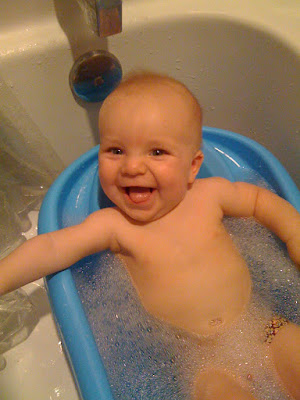 All in all it was a great weekend and it made me love my little family even more (if that's even possible!).
Posted by kjw at 10:51 AM