Yep - you guessed it.  The munchkin appears to be trying to sprout his first tooth.

I should have known based on the way he's been going to town gnawing on the rubber handle of his new spoon.  He sits there and chews on it while J and I are eating dinner and it cracks me up to hear his gums squeaking on the rubber.

Every night I have been shoving a finger in his mouth and running it over his smooth gums to see if I can feel anything. I've been relieved so far to never feel anything other than his spongy little gums.  That all changed last night.

While he was in the tub - splashing and squealing - I took the opportunity to do my nightly check (since he willingly had his mouth open).  To my dismay I felt something different. A sharp little edge was poking through.  I tried to get a look at it, but once a finger is in his mouth he is content to gnaw on it and doesn't cooperate with anyone getting a look at what's going on in there.

I don't know why that makes me sad. I guess because now he will no longer look like my little baby.  He'll look older with teeth. I know it just means that he is growing (which is a good thing), but he's doing it too fast for me! 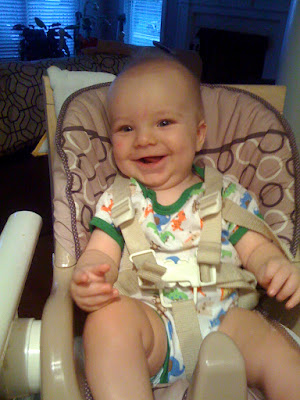 I need to get as many pictures of his gummy little smile as I can since it will soon be a thing of the past.
Now I'm just keeping my fingers crossed that when this tooth is in he doesn't use it to start gnawing on me when he's nursing.  My poor nips aren't ready for that.
Posted by kjw at 8:45 AM